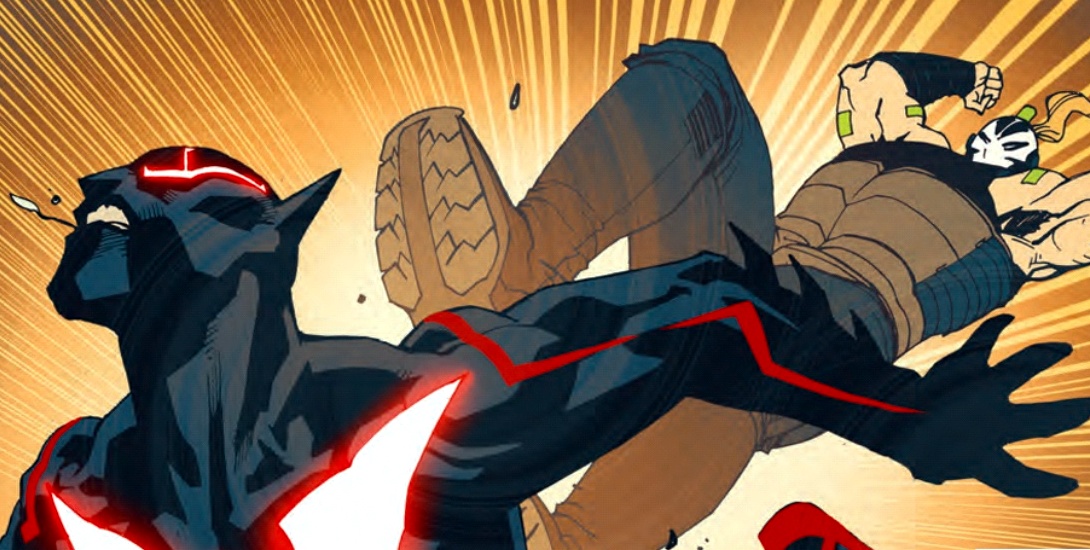 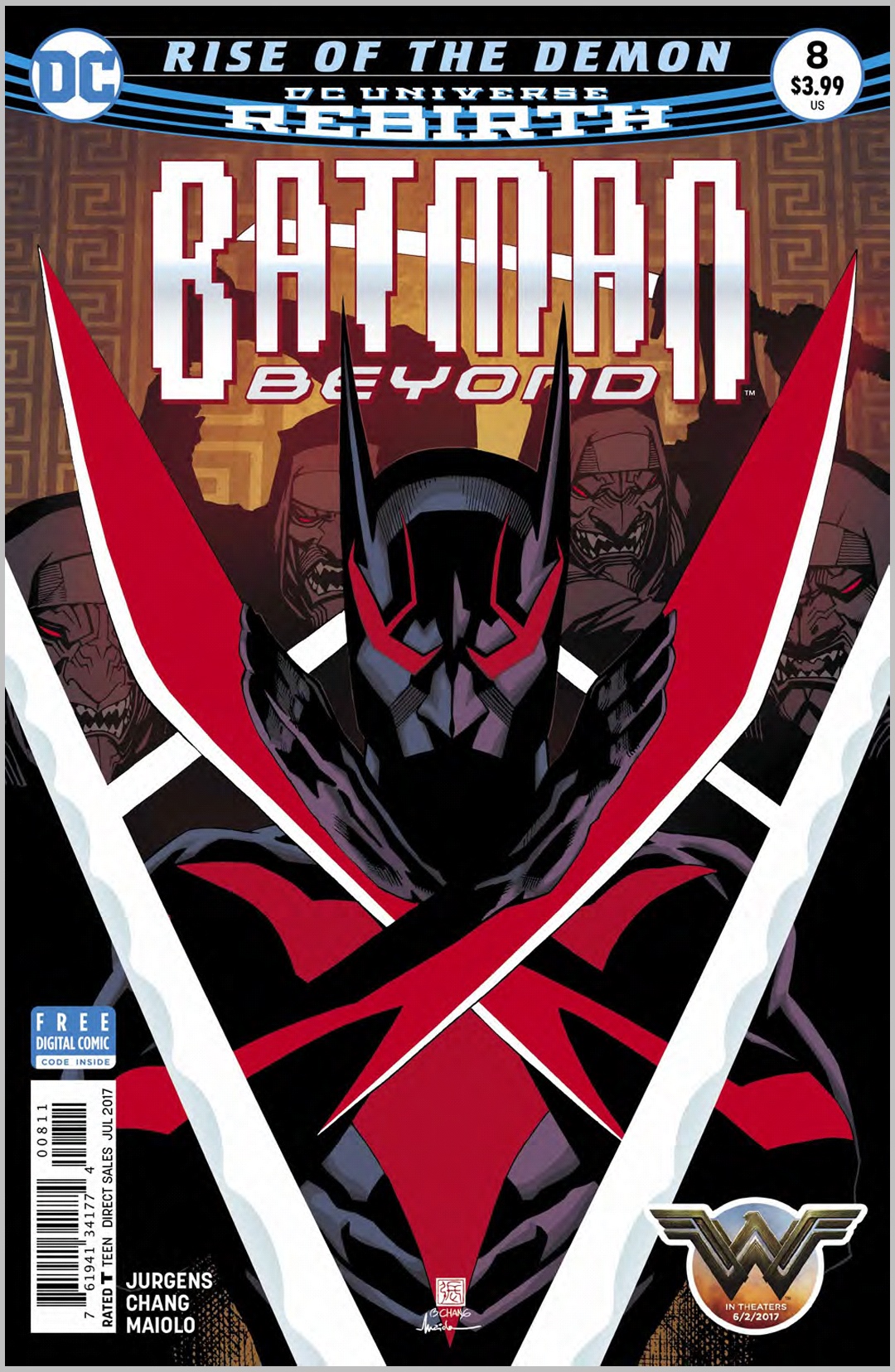 After seeing the stellar preview of this book last weekend, I was really excited when the complete issue came into our possession.
The first two instalments of Rise Of The Demon dropped us right into the action from the get go, so this chapter was greatly anticipated. I’m very happy to report that it doesn’t disappoint.
At the end of issue #7 the future Batman had just fought off an army of demonised ninjas, alongside Curare and Commissioner (Babs) Gordon. The victory, however, was short-lived as Curare dropped the bombshell that Ra’s Al Ghul – long believed to be dead – was back on the scene.
Terry and Bruce had only just returned when The League attacked, as if the re-emergence of Batman provoked their resurgence. The Bat-Suit that Terry was wearing was grabbed from the cave last-minute, and wasn’t the one he’d worn before. 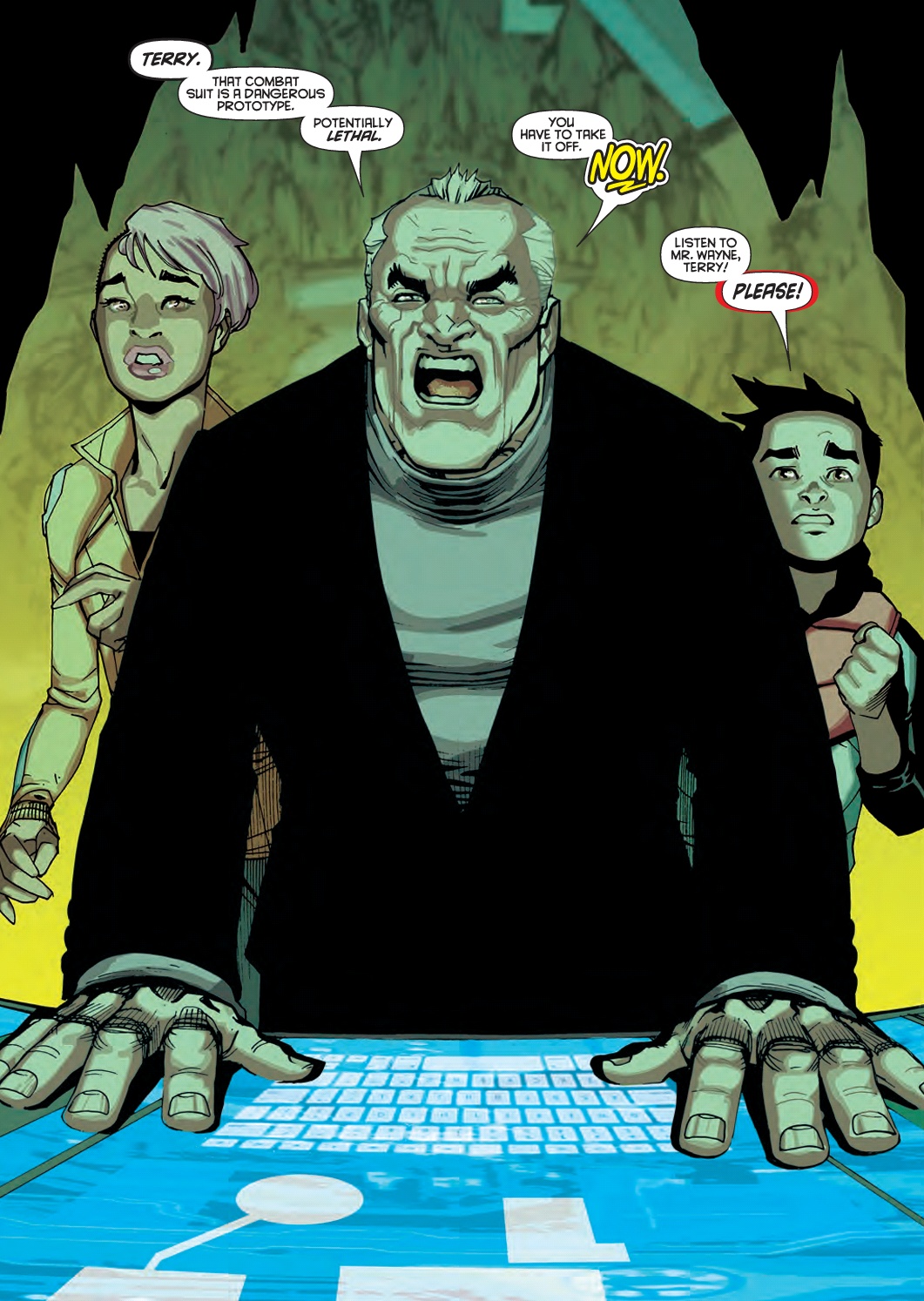 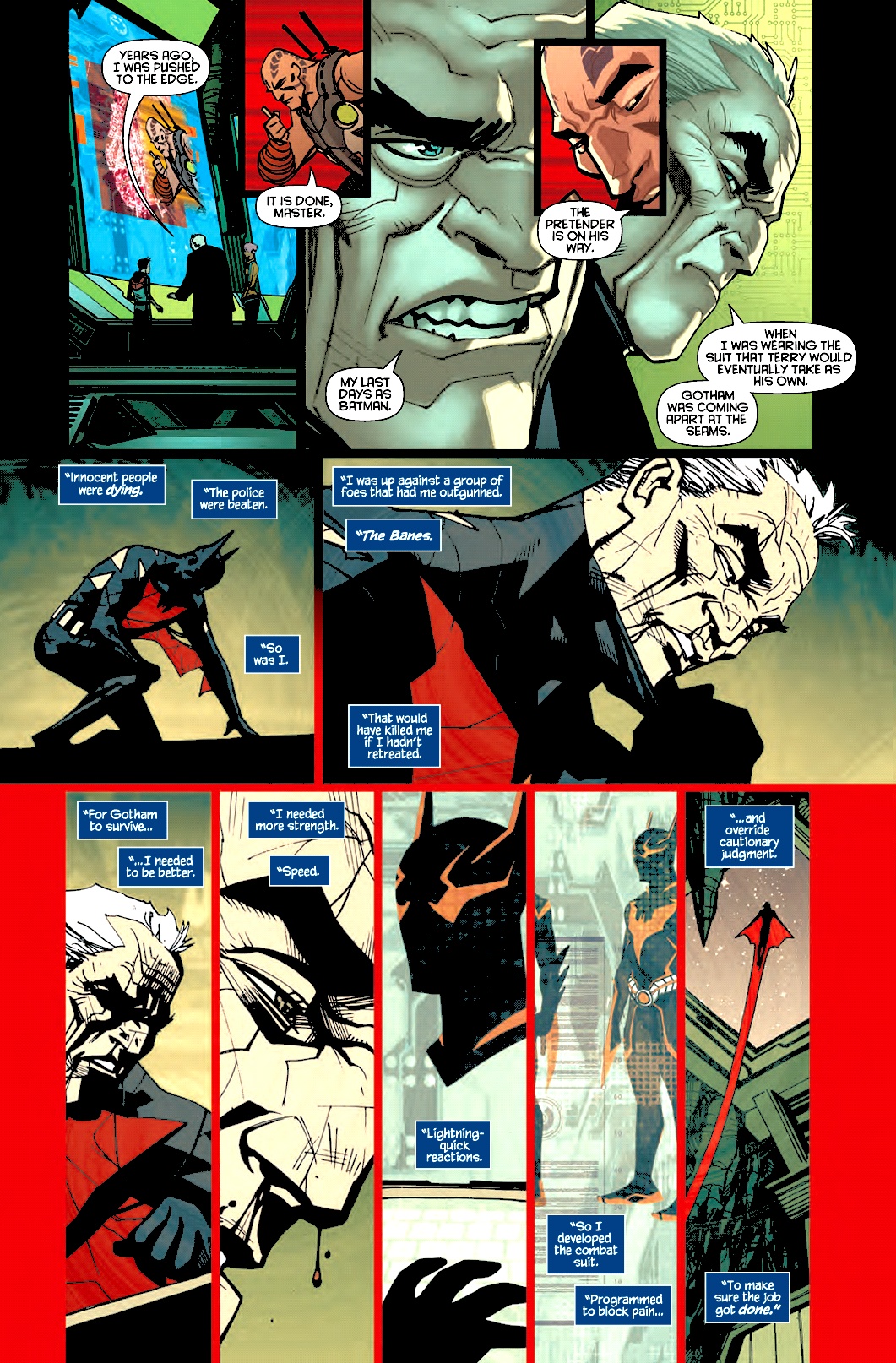 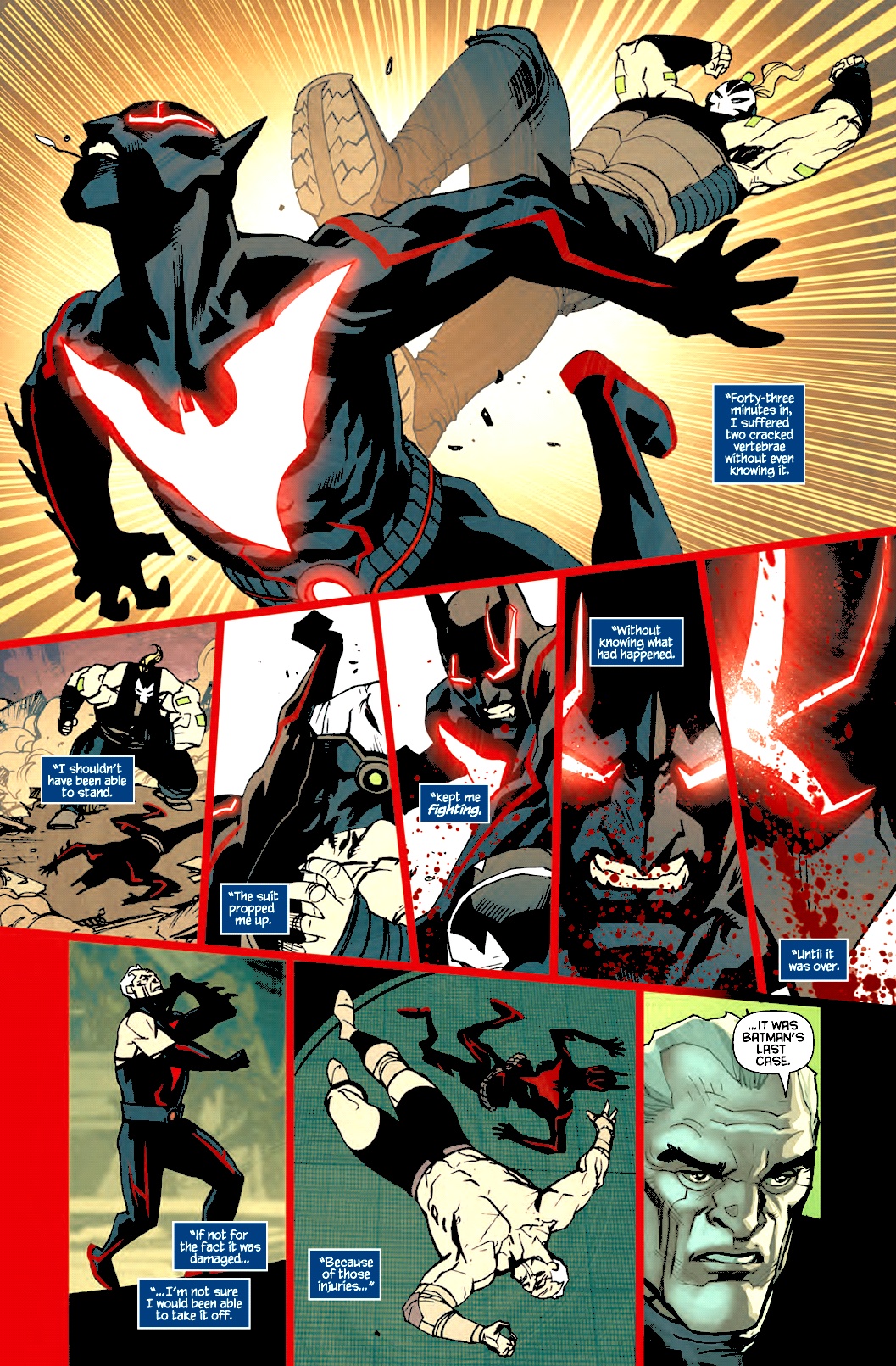 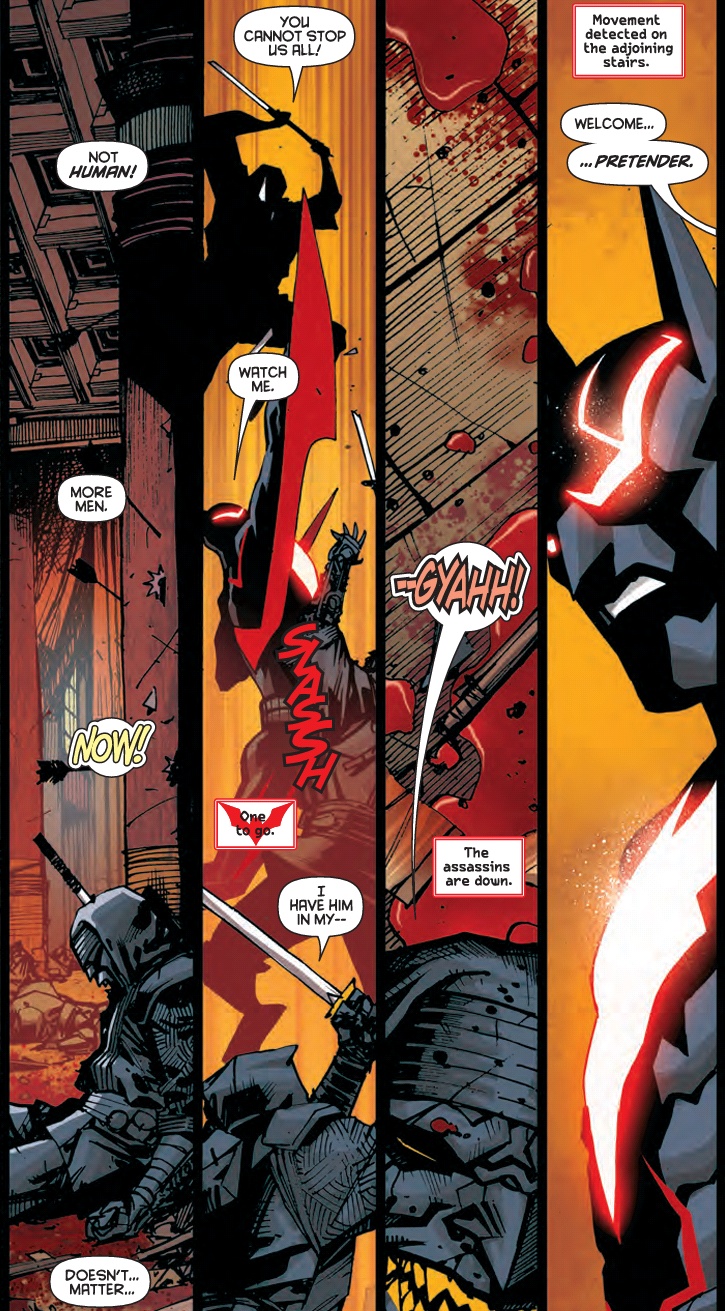 I love it when a different kind of threat presents itself. We’re all used to seeing our heroes fight baddies and monsters and ninjas. When the main protagonist has all the above to deal with, relationships to rekindle and a prototype costume that could actually be killing him thrown in, the tension is brought to boiling point.
Bruce and the rest of Terry’s team are all clamouring for him to get out of the prototype Bat-Suit, but an attack by Ra’s right-hand henchman Koru, puts paid to that idea.
Throughout this storyline the assassins, and now Koru, mock and disrespect Terry McGinnis. They call him pretender and do not accept him as Batman, saying that he is not worthy of the mantle. It seems that the resurgence of Ra’s Al Ghul and The League Of Assassins was no coincidence; it was timed for Ra’s to face Terry man to man. When the two antagonists finally come to blows the ending is a total knockout.

This month’s instalment of Batman Beyond delivers in every way possible. Fantastic writing and art, action, thrills and surprises. We get a look into Bruce’s past and a shocking glimpse of the future. When I say that Ra’s Al Ghul isn’t the man he used to be, I’m really not kidding! The cliff-hanger ending to this episode will grab Batman fans’ attention and change the landscape of this series going forward. Excellent stuff.