May Contain Squirrels - A Review and Recollection of Unstable Whether lighting your dynamite hat, charging the death-ray, spinning the gears, or just mixing lions with snakes, one thing is true: these reactions are unstable.

Some heavily creative people churn out around eight sets of Magic: the Gathering a year - not to mention supplemental and side products. With all that mental pressure, the Design and Development team do need a creative release. The third in the longstanding tradition of silver-border sets has come to us, after six years of careful polishing.

Since Unglued was released in 1998, the R&D fever dream came to fruition. With the theme of roosters (no double-entendre there), and the introduction of classics of the silver border genre like Urza's Science Fair Project, the tone had been set for the Un-Set. Short years later, Unhinged arrived on donkey-back with the cheating face of a certain genie. While I personally can speculate very little about how they were to play, I hear from many peers in the Magic community that neither set held up very well to play with in the limited format, what with Unglued having fewer than 100 cards, and Unhinged having only 172. This is due to Mark Rosewater - the head designer - and his intention for Silver Border sets to be mixed into regular limited formats for wacky spice. The most memorable part of the sets themselves were the basic lands, that became collector bling for deck builders for every format. 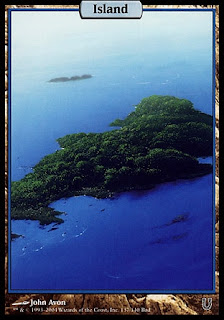 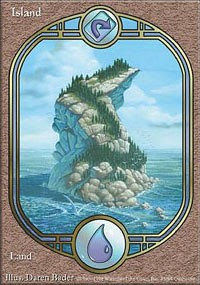 Late June comes, and the enormous announcement video is shown with the Hour of Devastation trailer. Our Lord and Savior - Mark Rosewater - informs us of the new Un-Set, called Unstable is coming. Featuring the fun of a Silver Border set, but modern design sensibility. Bold claims, MaRo. Bold claims.

Unstable was built with the intention for it to be fully Draft-able, and well self measured to not have (too many) antics compared to older silver border sets.

In comparison to the older ones, it's clear how they've made it more draft friendly. With a hefty count of 216ish cards - a large enough pool to build with, but also the Five Factions. Just like Modern Masters 2017, the ally colour pairs all have inherent themes built into the set to guide players on how to build. Aside from watermarks mattering - which is in and of itself hilarious - each of the pairs do care about certain in-built mechanics.

The Order of the Widget, are Blue and White Cyborgs, and very much like the people from Esper on Alara. They have a lot of effects that care for Artifacts. The Agents of S.N.E.A.K. are the Blue/Black Spies who manipulate the rules of the game by being simultaneously in hand and in play, warping graveyards and hands. The Legion of Dastardly Doom brings the destruction and chaos that Black and Red are known for by having the most effects that roll dice out of any pair. The Goblin Explosioneers, while bringing the destructive revelry that Red/Green does, also enjoys building Contraptions more than any of the other colours, following the Steamflogger Boss into the foundry for better and also worse. The Green and White of Crossbreed labs live to augment life, splicing creatures onto host creatures - despite there being some in other colours, Green and White have the most pairs, and the instantly banned Half-Squirrel-Half-Pony combo. 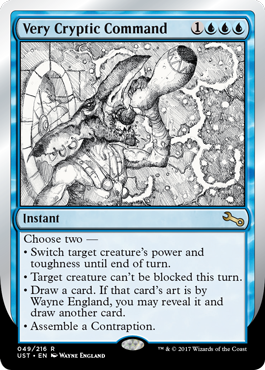 All the players on this arena ringed with silver are set, and all seems ready - but what about what makes it distinctly an Un-Set?

The spoofs of cards since past - both Black and Silver Border - are abound here. The set's Shahrazad ticks to all damage doubled as The Countdown is at One. One of the best creatures ever printed is back in a murder with stormy weather overhead. Having an opponent make bad decisions for you seems bad, so don't be Mindslaver-ed - be Kindslaver-ed.

However the creme-de-la-creme of the set itself, has to be the first Silver Border Planeswalker. Urza, Academy Headmaster. Magic has waited nearly twenty five years for this character to be depicted in card form, and not only is he all five colours, and a disembodied head after his beheading at the hands of the Phyrexians, or even arted by the wickedly talented Terese Nielsen; he is so powerful that his powers are randomly generated at askurza.com.

I had the wacky but fortunate experience of drafting it at Friday Night Magic and on Sunday with my loving boyfriend and a dear friend of ours.

Loyal to a fault to the Izzet League, my first few picks in Pack 1 led me to Blue and Red. The good removal of Magic Word and Just Desserts are quite irresistible. Split Screen is too fun not to play. Upon opening up pack two and seeing a certain lovely lady led me into Grixis. Splashing black for her and an autumnal Slow Zombie, and my affectionately named "Spike Board" was welcome and needed. 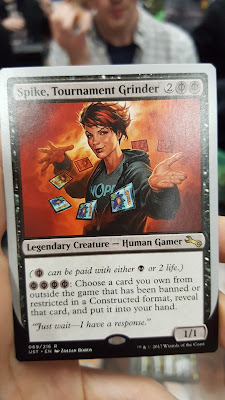 My first game and first round, we both started at 21 life as someone a few seats down resolved Gimme Five. It's great seeing a grown man frantically demand high fives amidst tournament tables. The game started well in my favour until my Half-Shark-Half-Constrictor met a grisly fate by sitting in an Entirely Normal Armchair. Then he released the goblins. Lots and lots of goblins.

I got the bye in round two, but so did four other people (shows how many showed up at Darksphere). We decided to play a five player free-for-all. Evil chairs got bounced. Jellyfish and swirly disks milled people. I divided my deck in four to split the screen.

On the Sunday, I went again to my favourite gaming spot and sure enough, my nearest and dearest were with me. I drafted well - Grixis again - and I was sent four rares in a row as you can see. It led me going two wins to one loss, and getting two Legendary Creatures in my prize packs. 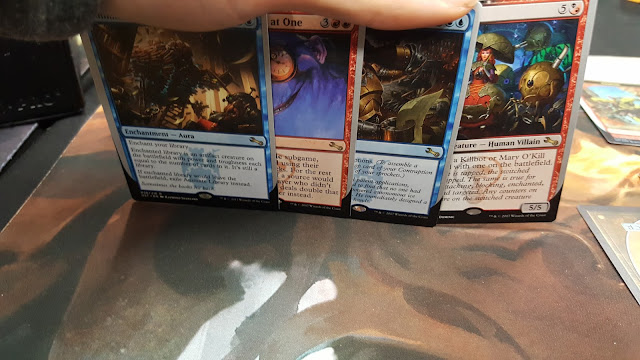 It's clear that Unstable is the culmination of MaRo's long work over the last six years. A brainchild of his unique love of the game of Magic, and utter zaniness. Once you look past the bold and strange concepts of the cyborgs and mutants, spies and brainiacs of the factions coupled with flinging cards and rolling dice, the drafting environment is deeply layered and intensely diverse - one not recommended for the beginner, but deeply welcome for a seasoned player. I look forward to cracking more packs in a pod, and I encourage all planeswalkers to do the same.