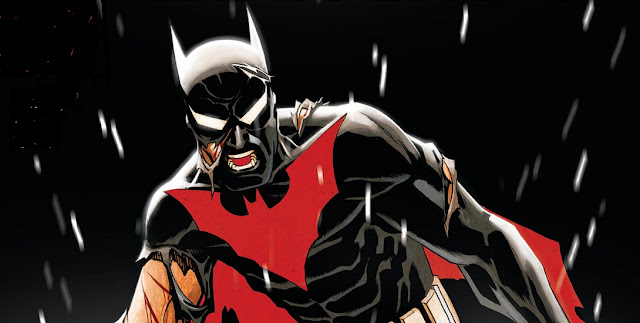 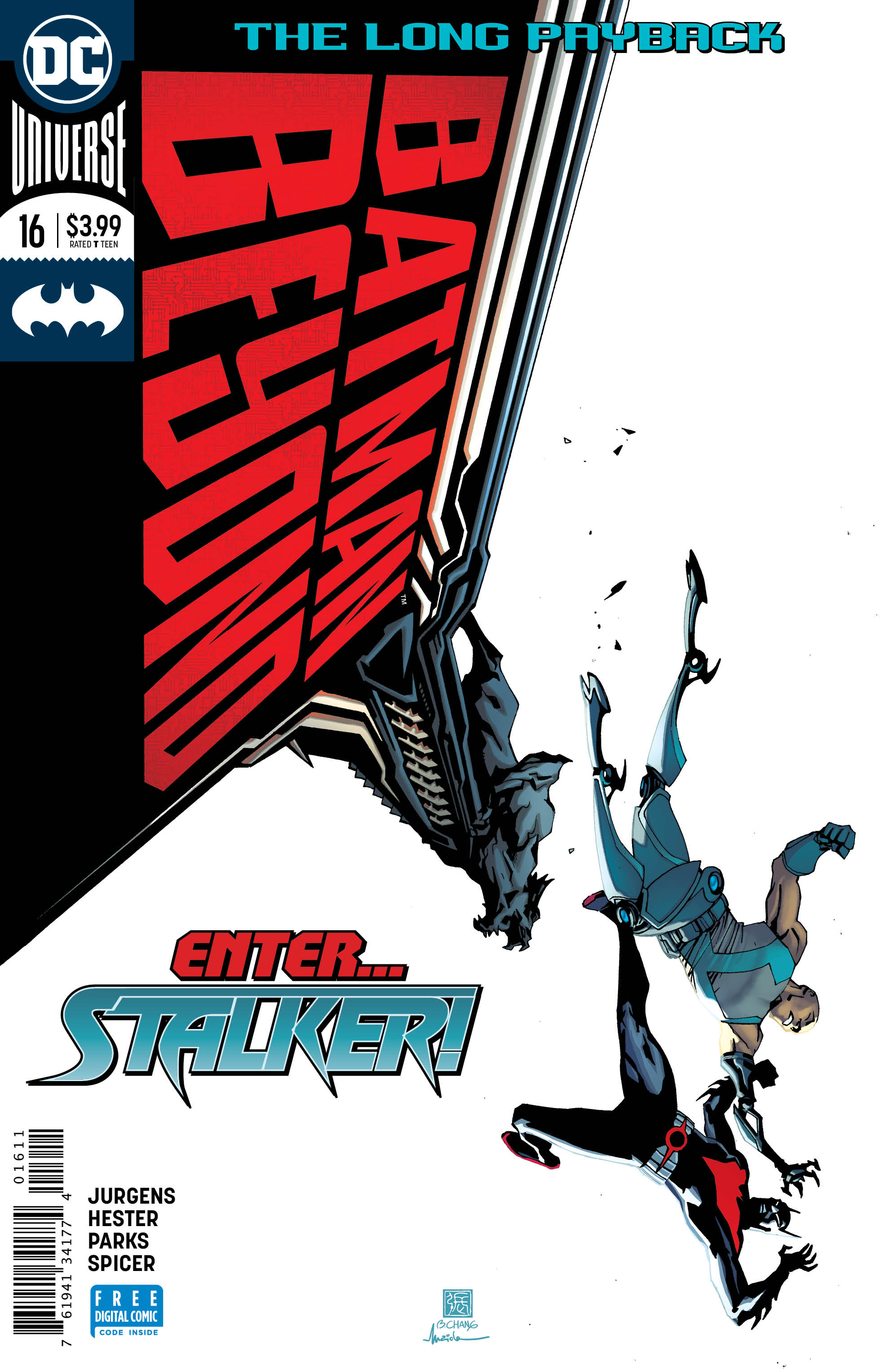 Writer: Dan Jurgens
Artists: Phil Hester and Ande Parks
Review by Steve J. Ray
High Tech suit versus cybernetic enhancements. Armor against bionics. Batman V Stalker. This issue is chock full of action, thrills and fun, from start to finish.
I loved the Batman animated shows from the 90s. The adventures of the original caped crusader, voiced by the incomparable Kevin Conroy will live on forever. At first, I was dubious about a Batman Of The Future being introduced, but I needn’t have worried.
The creative talents that made the Batman Beyond show were clearly fans of the character. Having an all new Dark Knight, trained and mentored by the original, truly made for some great stories. The same must also be said for the brilliant writers, and artists that continue to bring us the adventures of old Bruce Wayne, and young Terry McGinnis in the comics. Dan Jurgens has earned my respect and thanks, for he has steered these ongoing adventures for over three years, never missing a step. 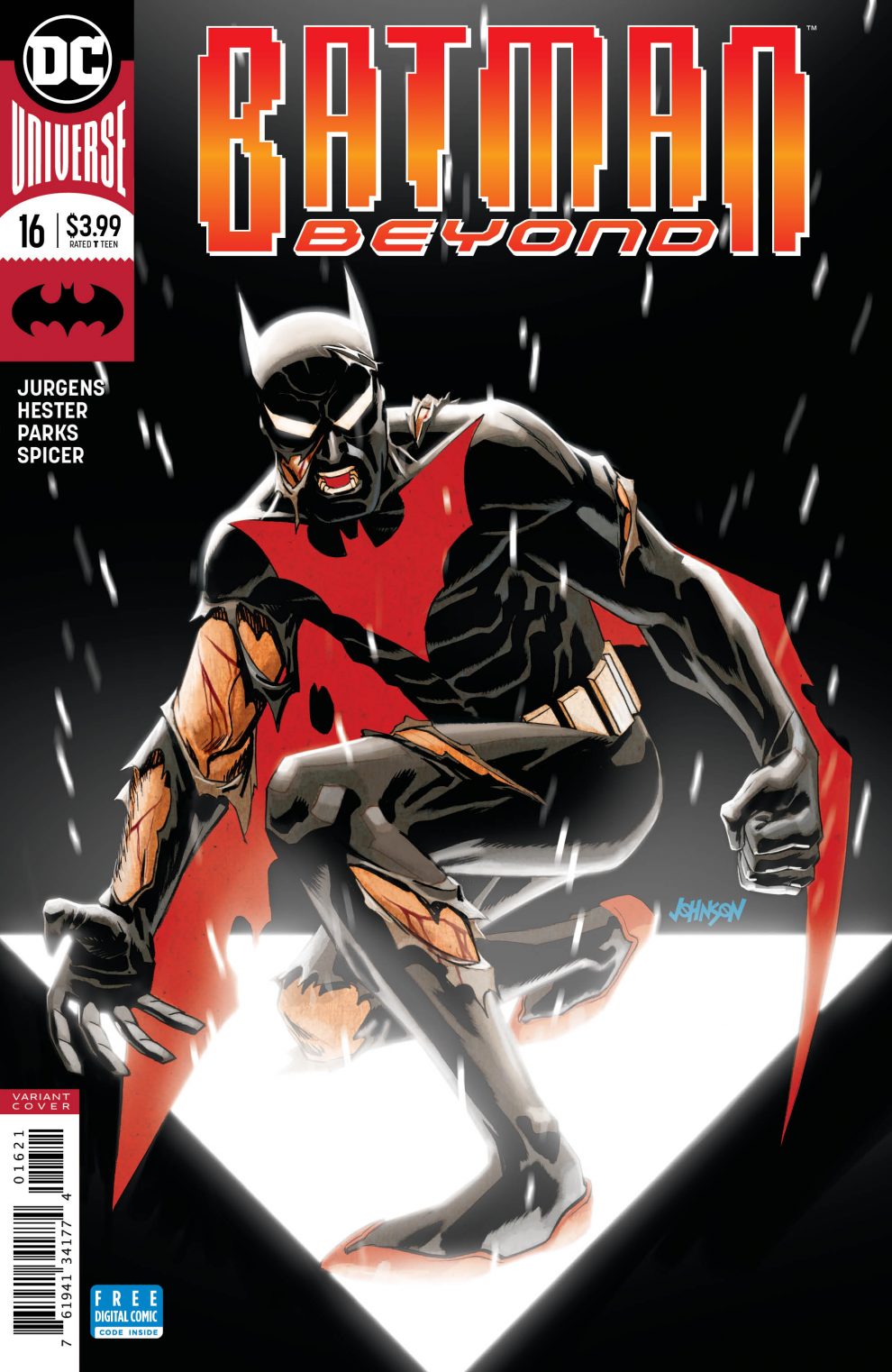 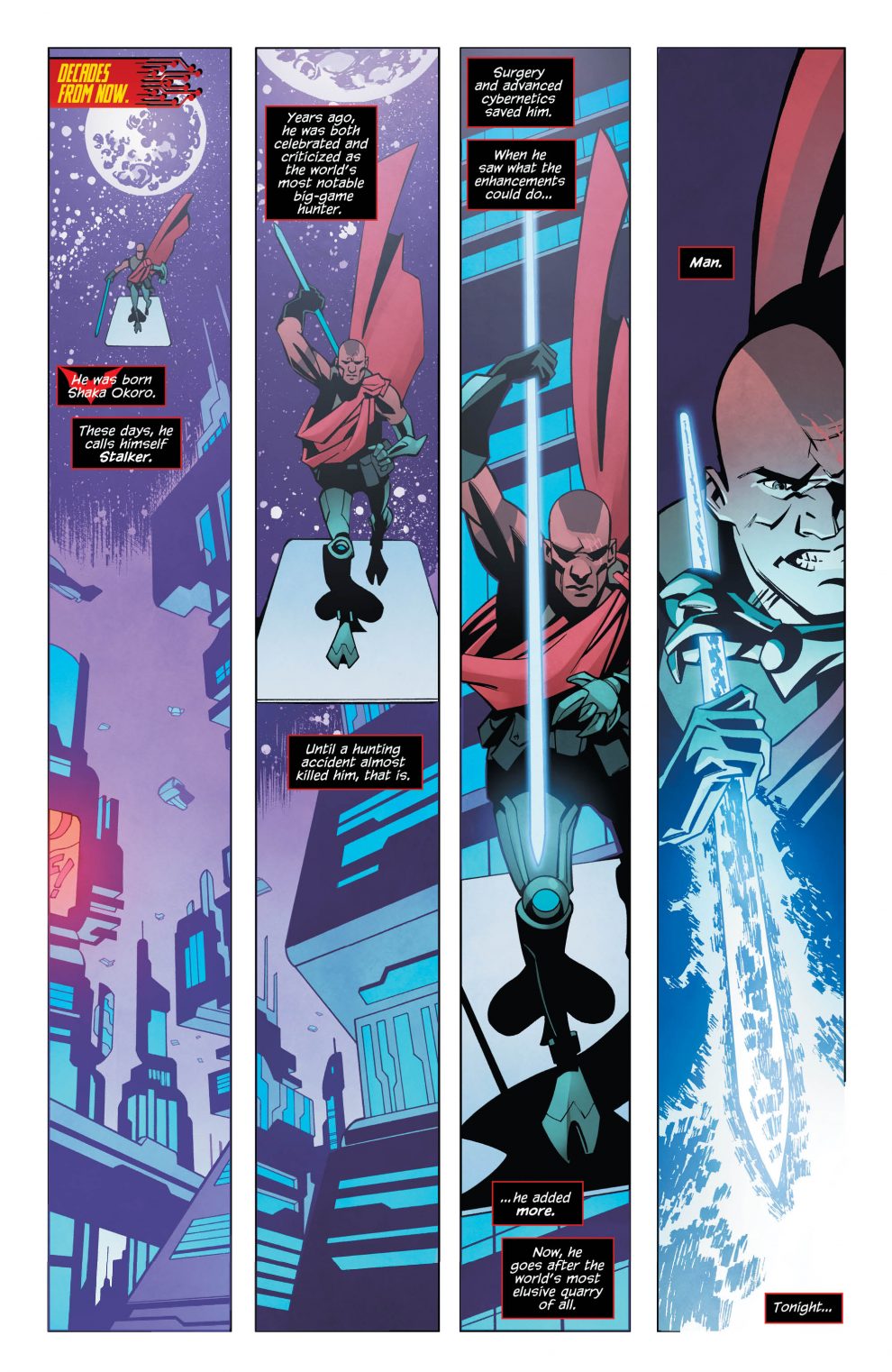 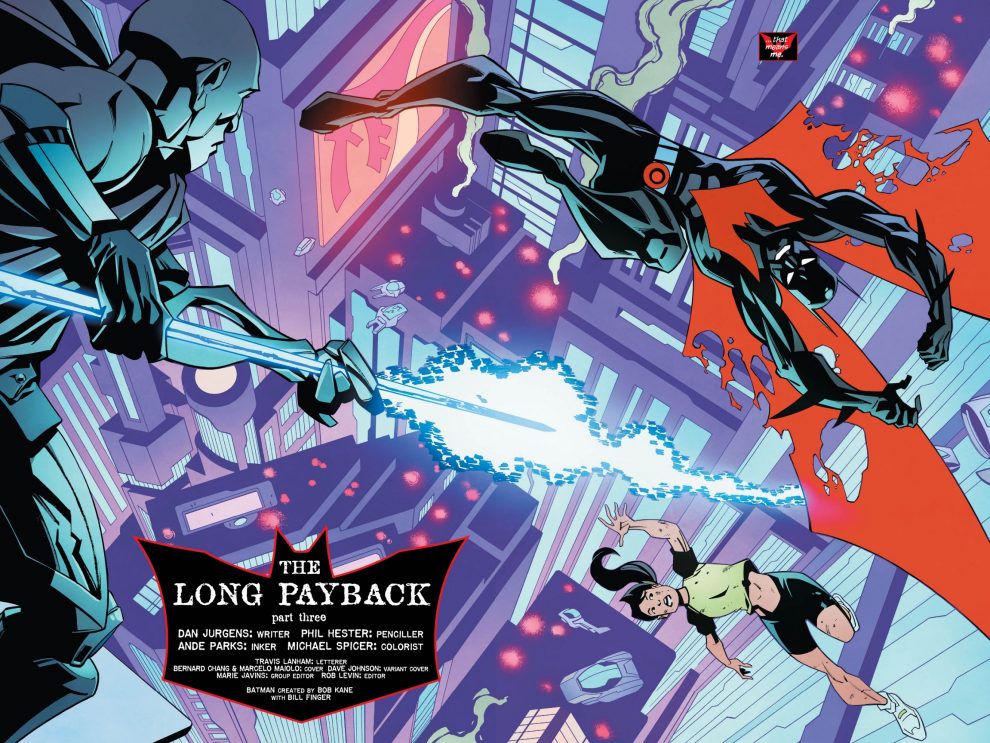 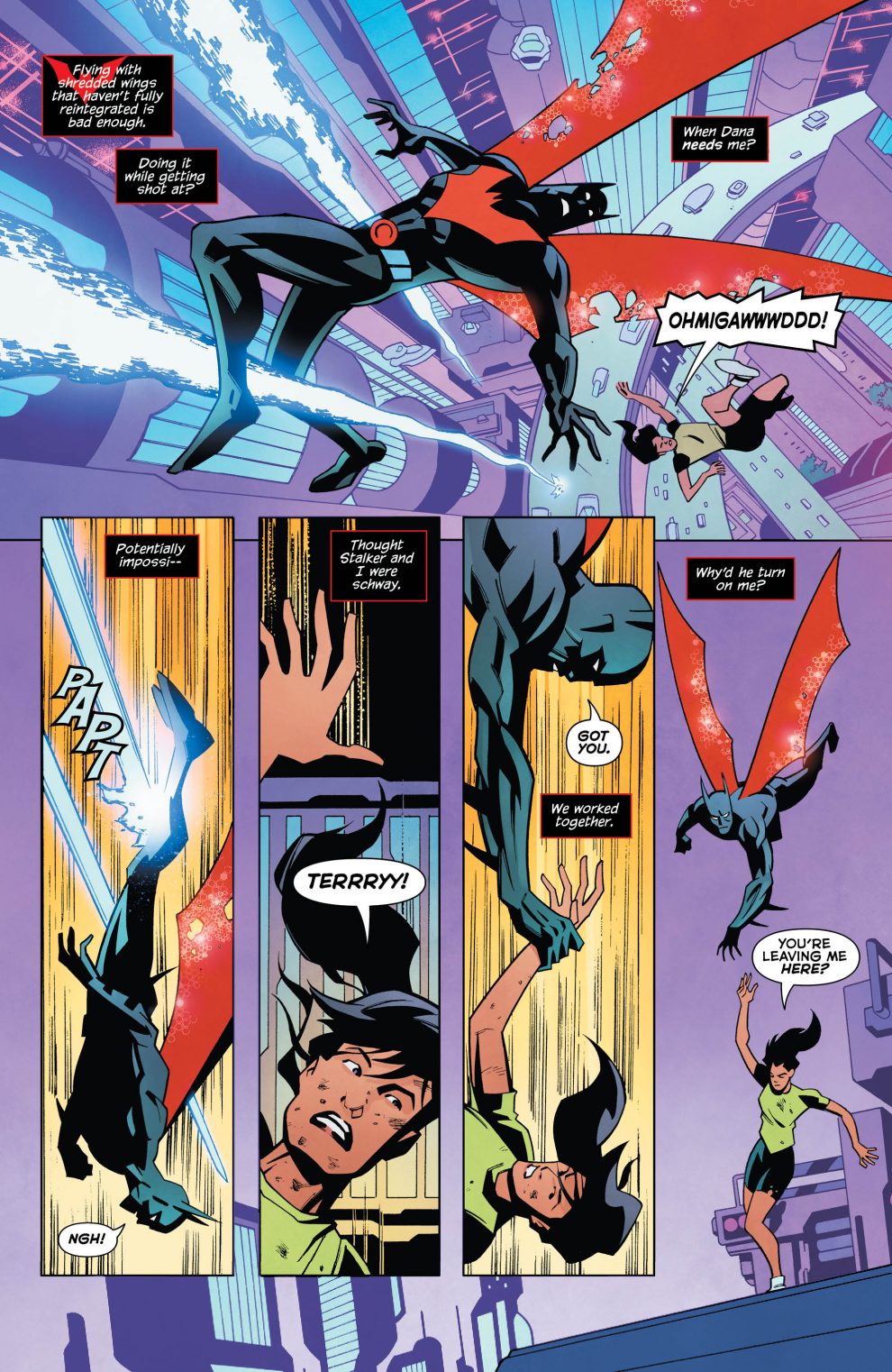 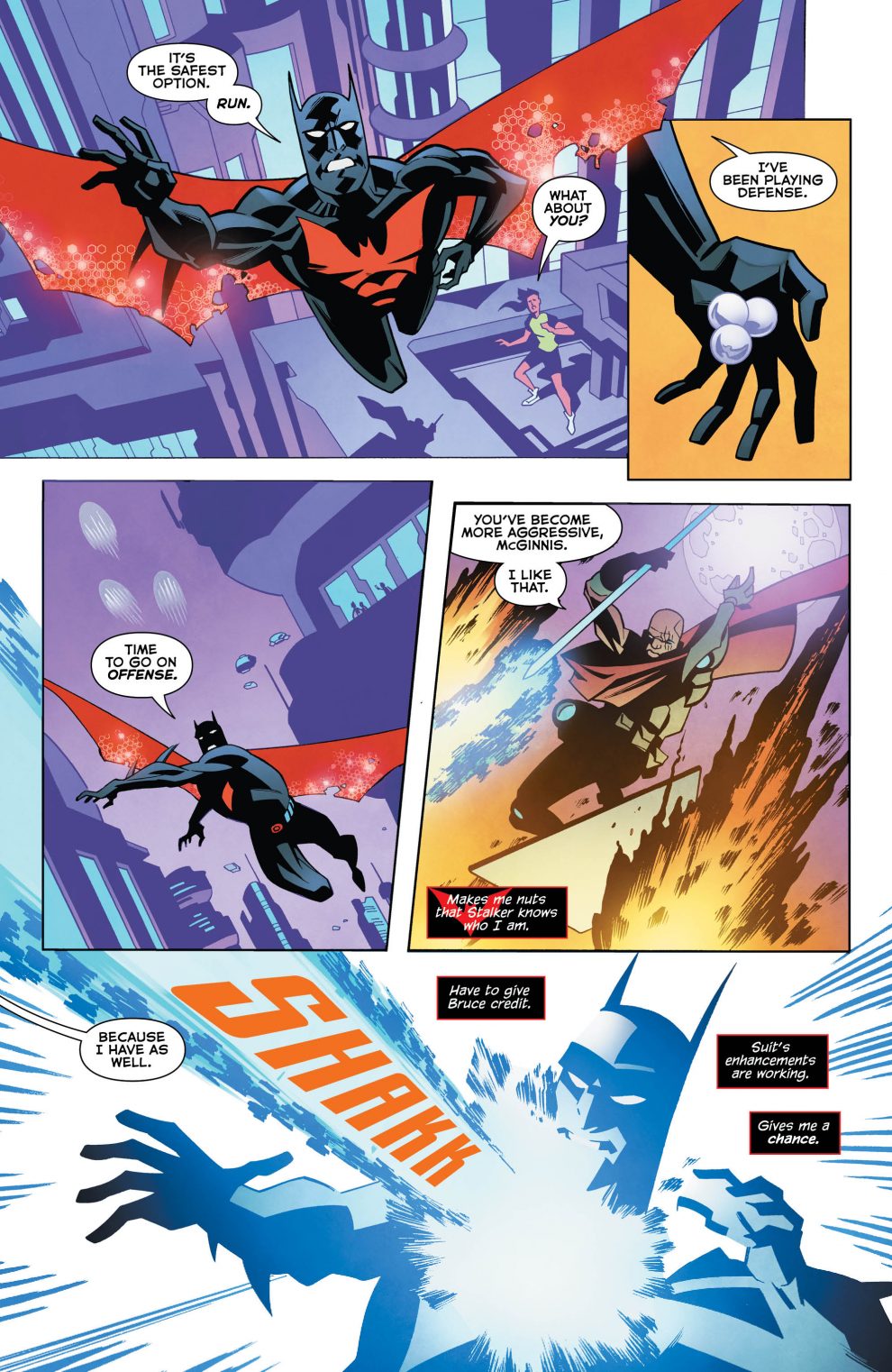 Batman Has A Stalker

Whether it’s by bringing back classic characters, like Stalker, or updating classics like Ra’s Al-Ghul, Dan Jurgens and his collaborators have kept this title fresh, and engaging month after month, and year after year. I loved Bernard Chang‘s art on this title, and am really enjoying his work on Nightwing too. I was worried at first that the quality of the art on this series would suffer, after Bernard – along with colorist Marcelo Maiolo – left the book.
Oh, ye of little faith.
Comics veterans Phil Hester and Ande Parks, along with keeper of the hues Michael Spicer, have proved me so wrong. Thanks, guys. I love what you’re creating in these pages. I’ll be very happy indeed if your stay turns out to be a long one.

With Terry seemingly having met his match in the Stalker, where does he go from here? If anything is certain in comics, it’s that the hero always finds a way. I can’t wait to see how Dan Jurgens and the gang get Terry out of this one!