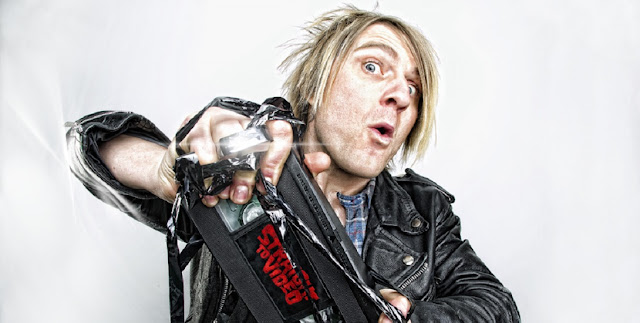 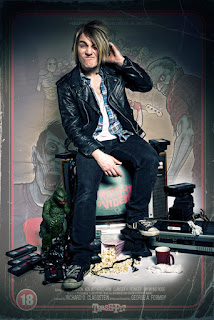 Rob Lane provides the bottom end in Ryan Hamilton and the Traitors. Onstage he’s a blur of hair, throwing shapes with his trusty bass like a full on rock star. Away from the band, he heads up his own project Straight To Video, a mix of rock/punk music which draws influence from eighties culture in general, as well as creating some cool merchandise to go along with the music. Rob was cool enough to chat to us recently about music, the eighties and being a geek.

Scott Hamilton: Would you like to tell us a bit about yourself Rob?

Rob Lane: Hey Scott.... Thanks so much for reaching out! So, I guess I start with introducing myself.... my name's Rob Lane... a bass player from the East Midlands / Nottingham / Derby area. I've been actively playing with various bands for the best part of 20 years. For over ten years I was the bassist for Nottingham Power Pop Rockers TEENAGE CASKET COMPANY... we had a pretty good run from 2003 through to November of last year, touring all over the UK, visited Europe and completed a couple of East Coast US Tours. Our albums received amazing reviews and we got to rub shoulders with some of our heroes. I guess the band's time came to an end... we were probably the right band at the wrong time or whichever way you say that. Super proud of what we achieved. I've also played bass for legendary Hard Rockers BULLETBOYS and was also a member for Pop Band LET LOOSE when they reformed in the late 2000's. Both amazing bands and I made some great friends. I'm now playing bass for RYAN HAMILTON & THE TRAITORS. 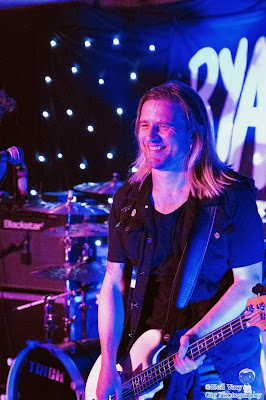 SH: What's your particular geek love of choice and how did you get into it?

RL: Rather than a specific style of movie / interest / TV Show, etc.... I guess my Geek Love of Choice is an Era... the 80s. I grew up during that time and I've certainly become a product of it. My Summer Holidays were spent visiting my Dad in the USA and I absorbed everything I could about American Pop Culture. I still can't get enough of it. I began a music project called STRAIGHT TO VIDEO a few years ago which tries to encompass everything about the decade which I love. I record my own versions of Movie Soundtrack Songs with the help of my ridiculously talented music buddies. Throw anything 80s and particularly Horror and I will eat that sucker up!!

SH: What is it about the eighties that appeals to you so much?

RL: I've thought about this a lot, probably too much to be honest. I think it's a natural thing to be drawn back to the time you grew up. I was pretty lucky and had a great childhood.... never really had any worries, as boring as it may be... stayed outta too much trouble and simply enjoyed being a kid. The 80s were such a great time though for Movies and Music. For me personally, so much of it holds up today and looking around a lot of 80s nostalgia is hugely back in fashion. 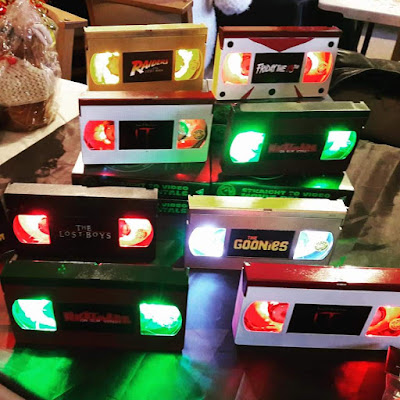 SH: What kind of memorabilia do you find yourself collecting?

RL: Over the past few years I've really enjoyed going to conventions and meeting heroes from the films I grew up on. It's always extra special when you meet someone and they turn out super cool and friendly. I think some of the nicest people I've met are Robert Englund (Freddy Krueger), Sherilyn Fenn (Twin Peaks) and Robert Rusler (Weird Science, Thrashin) were all as great as you'd hope! As for collecting stuff - I can't resist old Big Box Ex Rental VHS Tapes and also anything to do with the film BACKBEAT.

SH: What's the prize piece of your collection?

RL: Tough one.... I've got some pretty cool Nightmare on Elm Street Prints by the artist Graham Humphreys all signed up by the cast of the films. I'm pretty proud of those!

SH: Is there something you think of as your holy grail that you'd love to have?

RL: Not sure to be honest.... as much as I love collecting I'm trying to downsize a little and not put too much attachment on stuff. I think I'd love an old Arcade Machine though at some point... maybe an original Spy Hunter or the original Star Wars arcade game. Either of those would be pretty amazing! Not sure how the wife would feel about it though! 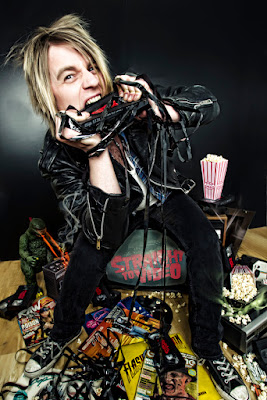 SH: There were some great American TV Shows from the 80s that always seemed to be must watch TV. What were your favourites?

RL: Oh man.... I was that kid who watched pretty much all of those shows. Like you said, it really was 'Must Watch TV'. Again, it was a snap shot at a country so much bigger and exciting than ours here in the UK. I would watch all these shows at my Grandma's house where I spent my weekends... all of them dude. The cool thing was that we'd all sit and watch them as a family... Grandma, Grandad, my Uncles... it was just the best! If I had to pick some favourites I think it would be The A Team, The Fall Guy and I always had a soft spot for The Greatest American Hero which has probably THE BEST theme song ever!

SH: This might be a tough one for you but if you were trapped on a desert island, which Box Set would you choose from Street Hawk, Airwolf or Knight Rider?

RL: I LOVED Airwolf.. I had a rip off Airwolf Tracksuit from the local market! The theme tune and intro were just the greatest and Jan Michael Vincent was just the coolest dude back then (STV Trivia Spot.... I learned a few years ago that he actually now lives in the same town as my Dad in the USA... Vicksburg, Mississippi... I'm yet to stalk him and track him down though!!). My problem with Airwolf though, was that you very rarely saw the helicopter until the last ten minutes! That was a long time for a kid to wait!

Loved Street Hawk too.... I got to meet Rex Smith who played Jesse Mach at a Comic Con a few years ago and got my annual signed. He was a really cool guy and didn't we all pretend our BMX Bikes were Street Hawks too?!

I gotta go with Knight Rider though! You couldn't really beat it... everything about it was mind blowing to us kids.... The Hoff was at the top of his game and for a long, long time my dream car was a Trans Am! 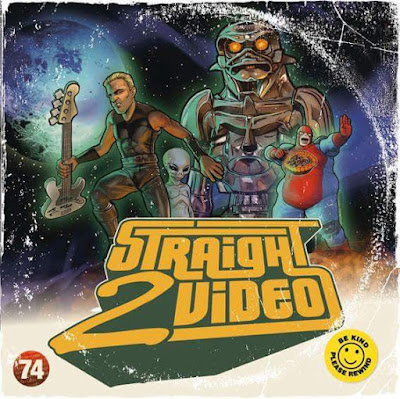 SH: Can you tell us more about Straight To Video please? It always seems to be more than a 'Music' Project?

RL: Haha... yes it is much more than that and that was always the plan. Anyone who knows me will confirm I like to have fingers in lots of pies. I get bored really quickly and jump from one thing to the next... I am, for the most part, pretty good at spreading myself thin.

One thing I'm not that great at though is songwriting which always made it tough to do what you might call a Solo Project... songwriting is kinda a bit part of it!! :) I have been VERY lucky though over the past twenty years or so to have worked alongside some amazing musicians, so I decided to take my love of Movie Soundtracks, 80s and 90s nostalgia and wrap it all up in something called STRAIGHT TO VIDEO.

I originally did an EP of 5 songs from various films. I went in the studio with Mickey from The Traitors and we put down the bass and drums. Then from there I got a bunch of friends to all add their input to make the songs come alive! It got a great response so the following year I did a full album on Pledge Music which hit over 200%... I was floored. Since then I've been recording the odd song a couple times a year and just putting it out there for people... I love the feedback, particularly if someone has not heard the song or seen the film it's originally from.

Aside from the music I like STV to branch into other areas too. I've done Movie Nights and try and create some cool things to sell online... Halloween is becoming a big deal too, now I've started doing my Halloween Crates... full of all cool stuff I collect throughout the year. Kinda along similar lines to the Nerd Block and other subscription boxes. I have a lot of fun doing all this and it certainly keeps me busy when The Traitors aren't recording or touring. 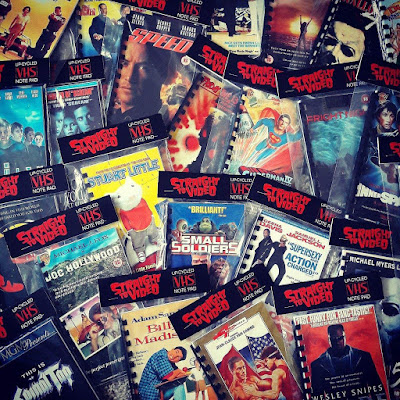 SH: You've probably been interviewed loads and been asked hundreds of questions over the years. But is there ONE question that you've always wanted to be asked, that nobody's ever asked you? What's that questions and what's the answer? What do you want your fans and our readers to know about you?

RL: Good Question!!! I don't think anyone has asked who my favourite Beatle is? Which my answer would be Stuart Sutcliffe, their original bass player and best friend to John Lennon. I've had a bit of an obsession about Stu since I saw the 1994 film Backbeat all about his life. I've even been to Liverpool a bunch of times, tracking down landmarks and trying to walk a little in his footsteps. His story is incredible... if you're unfamiliar with him please check him out!

I'd love to know more about the peeps out there who dig the kinda stuff I'm into. I'm pretty easy to track down on the internet and would LOVE to hear from anyone who wants to chat or show off their retro collections! :) 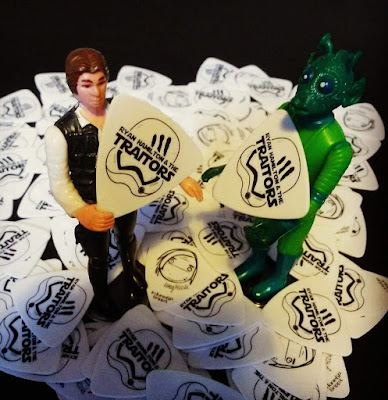