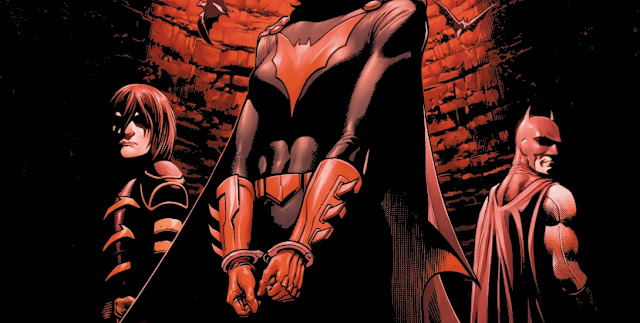 “The Trial Of Batwoman” 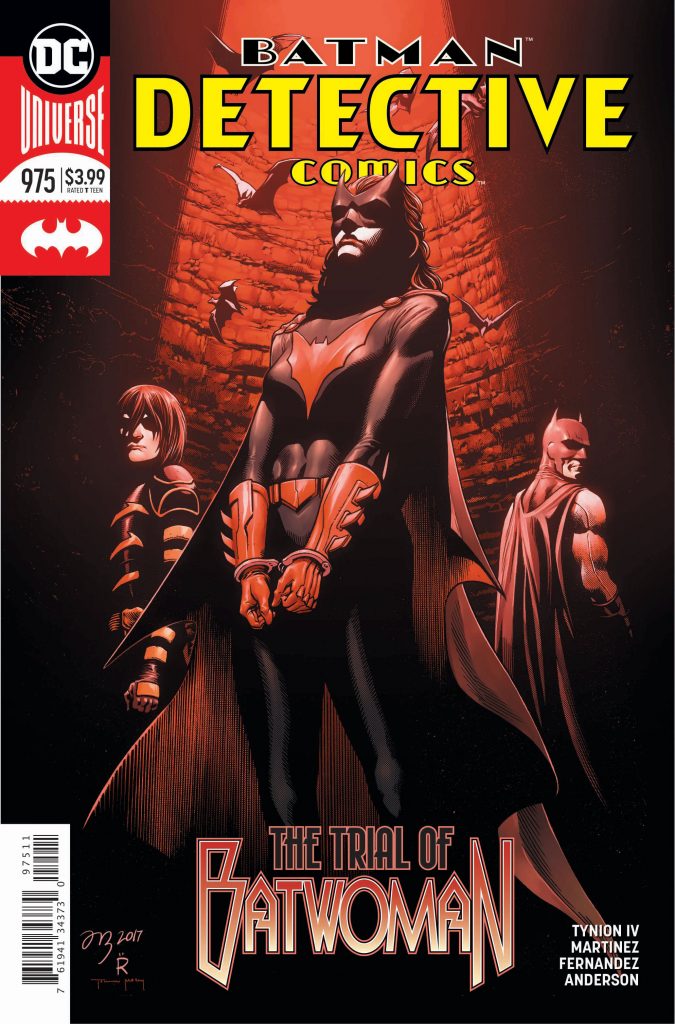 Review by Steve J. Ray
The latest issue of Detective Comics sees many welcome returns. My favorite creative team; writer James Tynion IV, artist Álvaro Martínez, inker Raül Fernandez, colorist Brad Anderson, and letterer Sal Cipriano has reunited to bring us the tale of “The Trial Of Batwoman.” This is a team that has helped this book rocket to greatness, most recently in the stunning “A Lonely Place Of Living.”
We also have the long awaited appearance of all of Batman’s original sidekicks; Dick Grayson, Jason Todd, Barbara Gordon, Tim Drake, and Damian Wayne. It’s a Bat Family reunion, but NOT in a fun way.
Oh yes, this issue is BIG… in more ways than one.

Bruce Wayne has called in Nightwing, Red Hood, Batgirl, Red Robin, and Robin to help him decide the fate of Batwoman. After shooting and killing Clayface Kate Kane’s future as part of Gotham’s Knights is in question. Once again, it is hard to condemn her actions, no matter how horrible they seem. The brilliant part of this issue is that the rest of the Bat Family are as divided on the issue as the audience is.
This bumper 28 page feast of a comic delivers in every way possible. From the opening scenes with a young Bruce and Kate at her mother’s funeral, the emotions are high. We would certainly expect that certain members of the team would defend Batwoman, yet some of the responses in this instalment still surprised me. The beautiful part of the writing is that, with his intimate knowledge of his cast, every emotion James Tynion writes fits. Every character is portrayed as we would expect, and every sentence uttered, every emotion felt, is true to who they are. This isn’t just a case of a writer who’s done his research… no. In these comics Tynion proves that he knows these characters intimately, and loves them as much as we do. 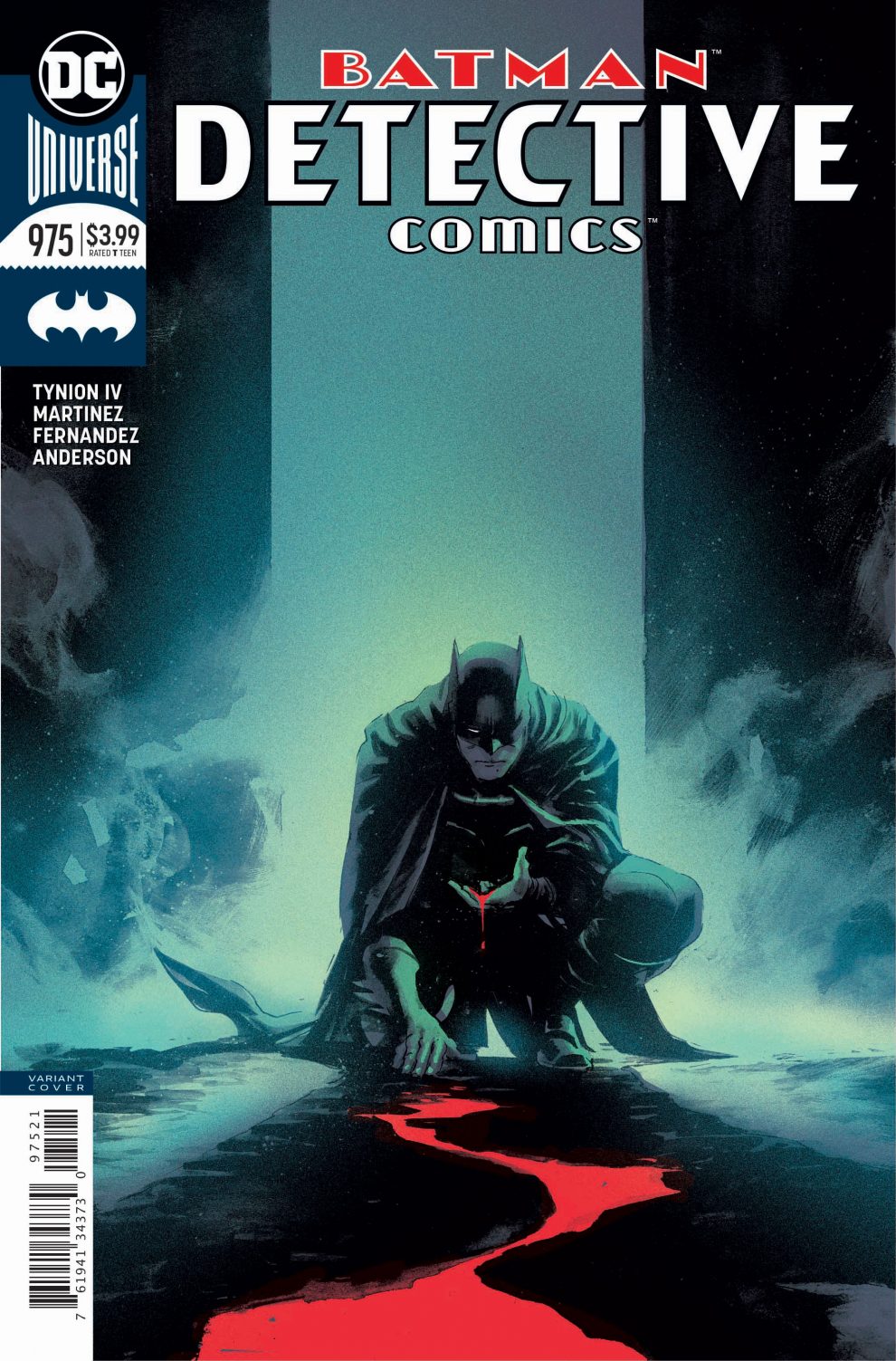 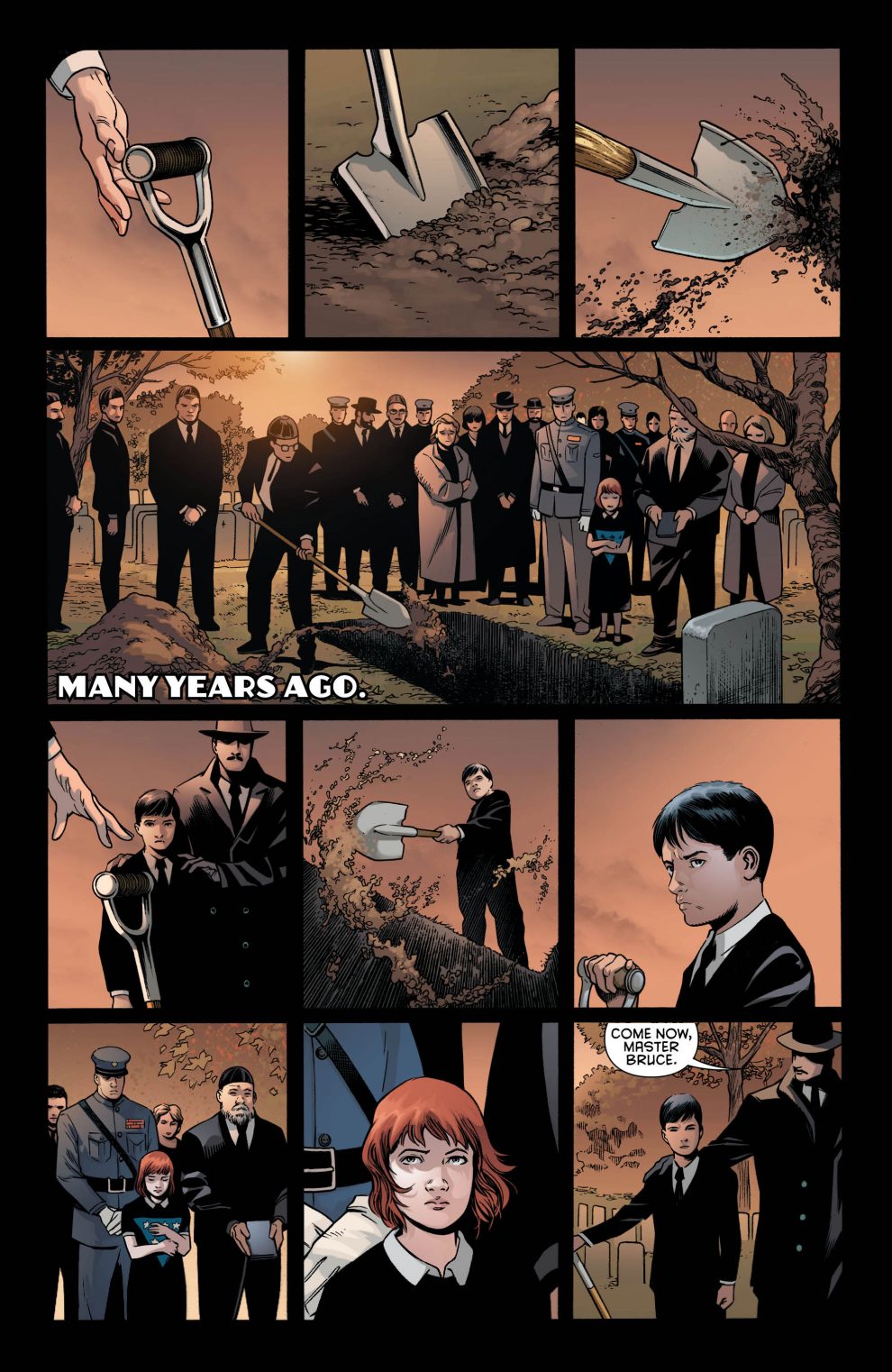 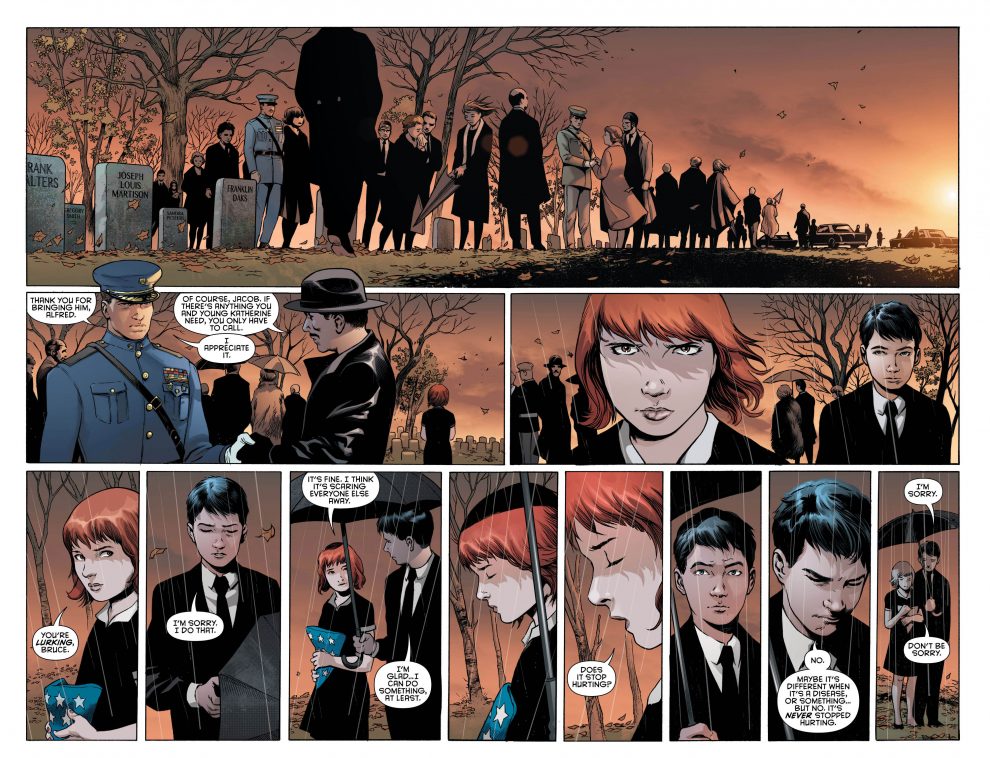 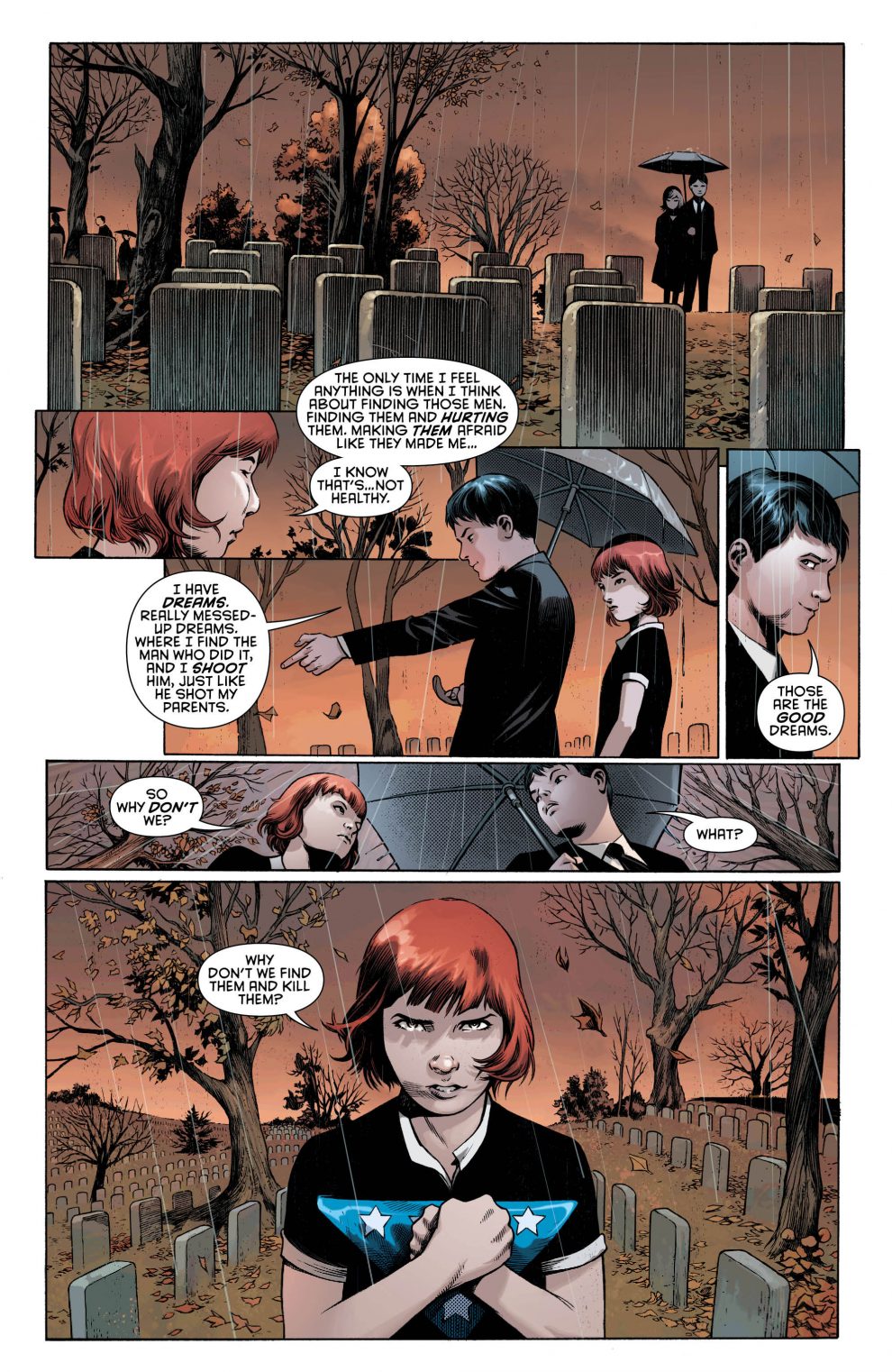 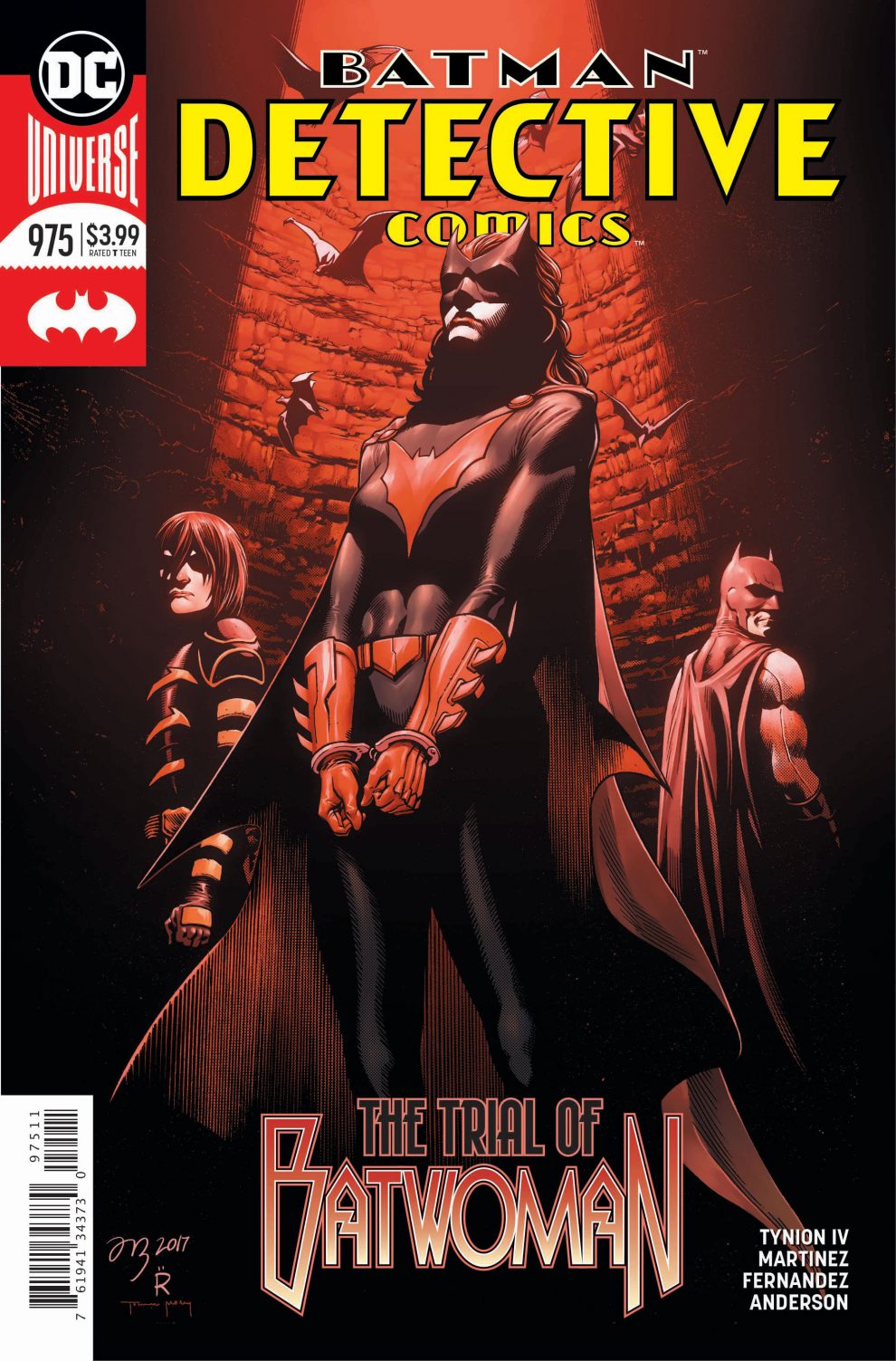 Since this arc began in Detective Comics #969 tension levels have been high, and the fractures in the team have been spreading. The amazing thing to note is that, since Clayface’s death, this title has been bringing us issues full of drama, and emotion. The last instalment with action and comic book thrills was the issue in which Batwoman pulled the trigger. Does this mean the book has been boring? No, not in the slightest.
The art in this series has been stellar, week, after week, after week. I’ve already said that this team is one of my favorites in all of comics. I don’t just mean currently… I mean EVER. Álvaro’s intricately detailed pencils, beautifully drawn faces, figures and settings. Raül’s lovingly rendered inks, adding depth and contrast to the already gorgeous visuals. Color wizard Brad Anderson’s triumphant return to the book, bringing light, darkness, emotion and substance, elevating the visuals even further. Sal Cipriano’s crisp, crystal clear lettering, making it so easy to read, and to follow the deep, rich dialogue written by scribe James Tynion. This team is simply phenomenal.

As a fan it’s great to read comics by creators who clearly show that they are fans themselves. I’m not saying that any fan could achieve this, oh no. Tumblr and the internet are full of stories that are the worst kind of fanfic. Detective Comics is being handled by fans who are true professionals and, in my mind at least, leaders in their respective fields. “The Trial Of Batwoman” is another prime example of what a great comic looks like. With James Tynion nearing the end of his run I must admit to feeling a twinge of sadness, but I can’t wait to see what he brings us next.