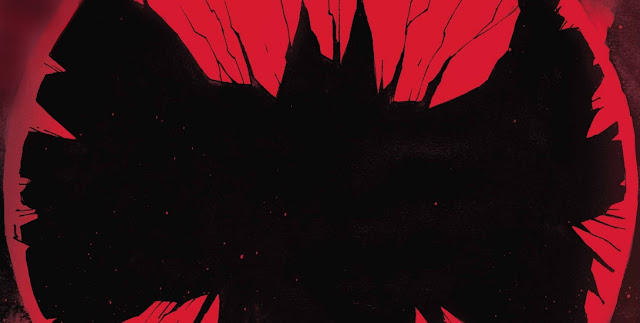 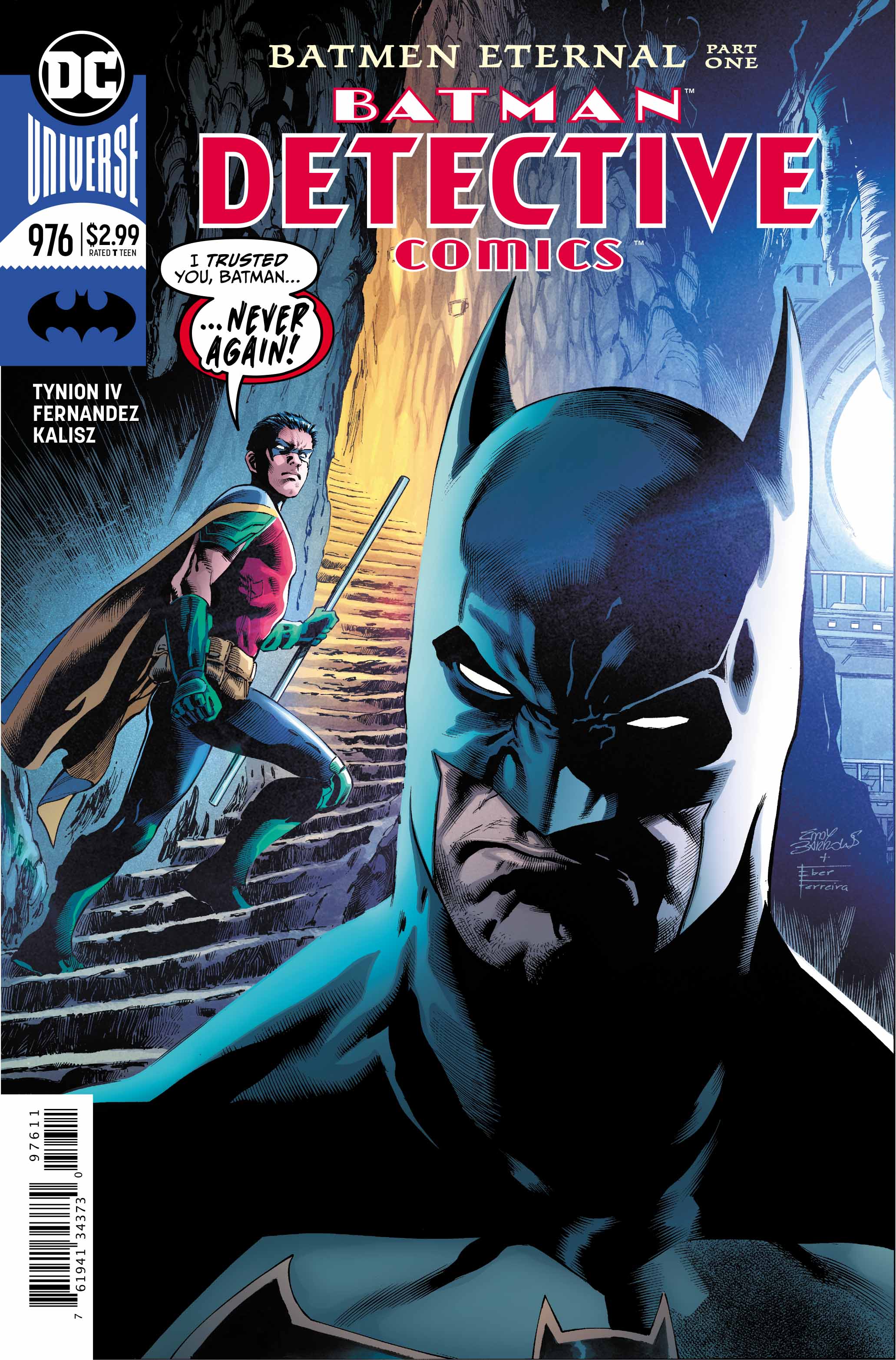 From the alternative cover, depicting a shattered, blood red Bat-Signal (evocative of the vintage 90s Bat Epic “Knightfall”) to the very last page, “Batmen Eternal” is an emotional powerhouse of a comic. The script is tight, tense, and emotional, and the art elevates the tension to nerve shattering levels.
This issue of Detective Comics is cinematic, atmospheric, and action packed!
The title “Batmen Eternal” sounds positive, but seeing the strained relationship between Bruce and Tim, and Kate leading The Colony makes the future feel very bleak. 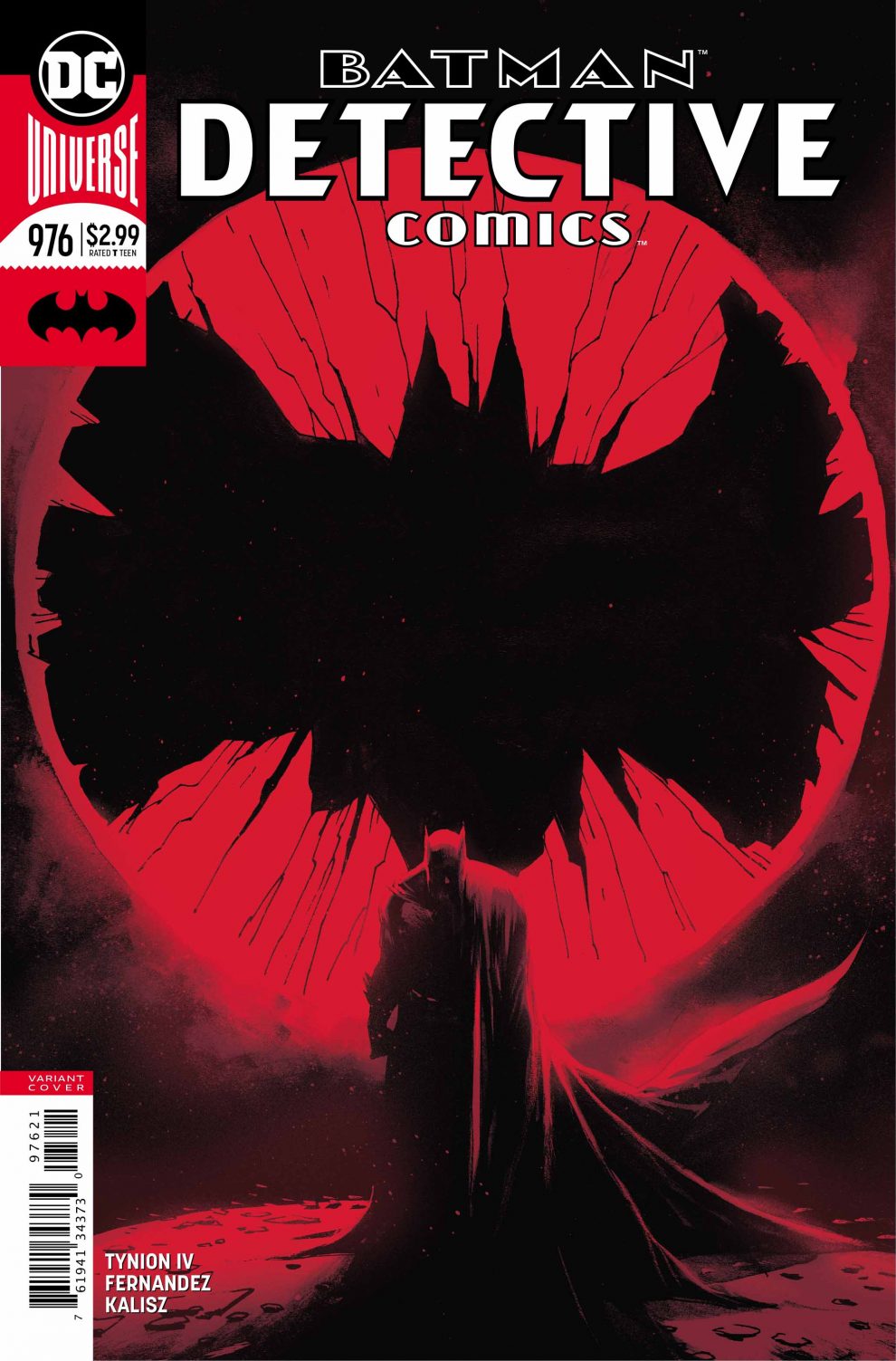 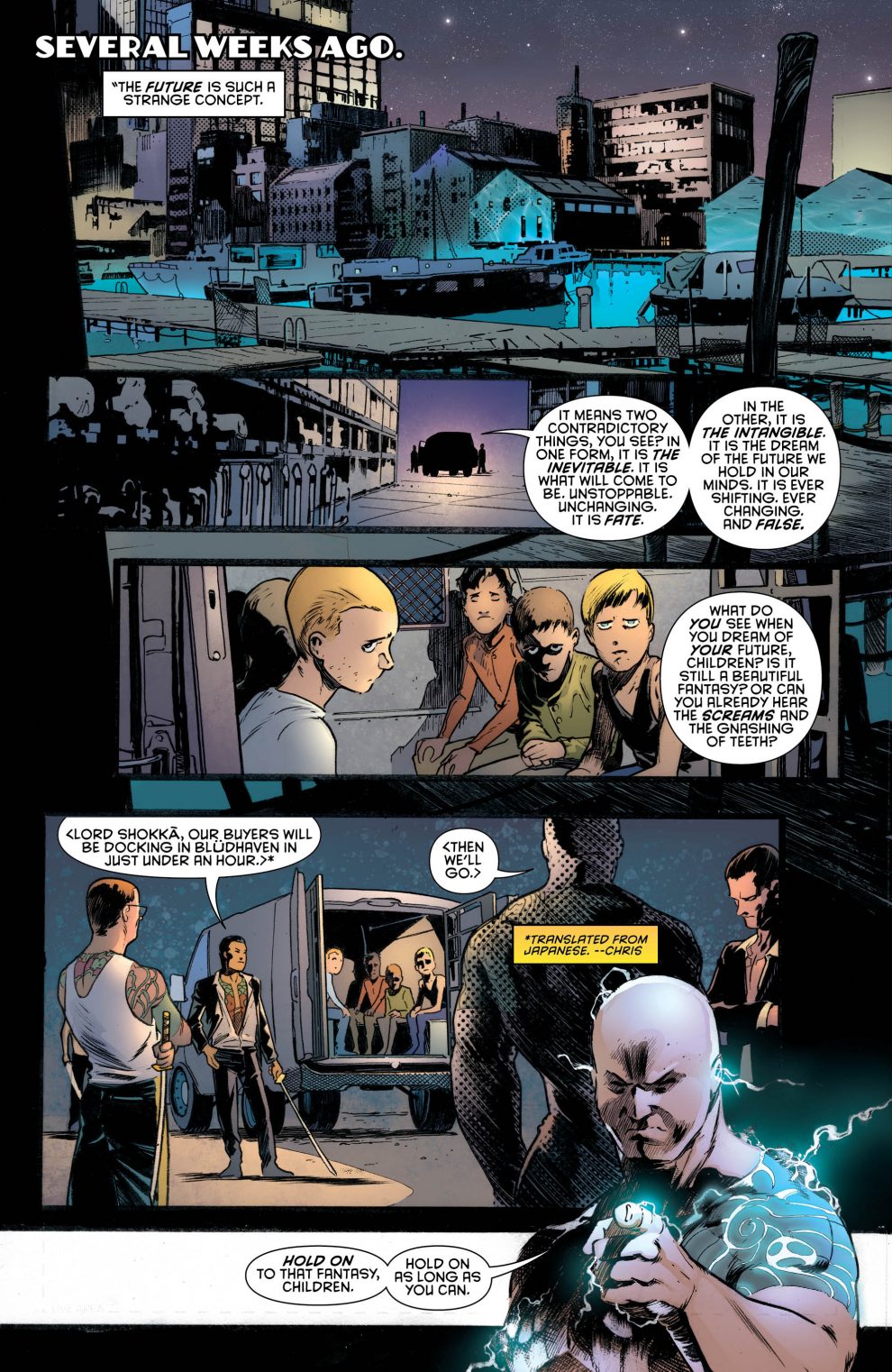 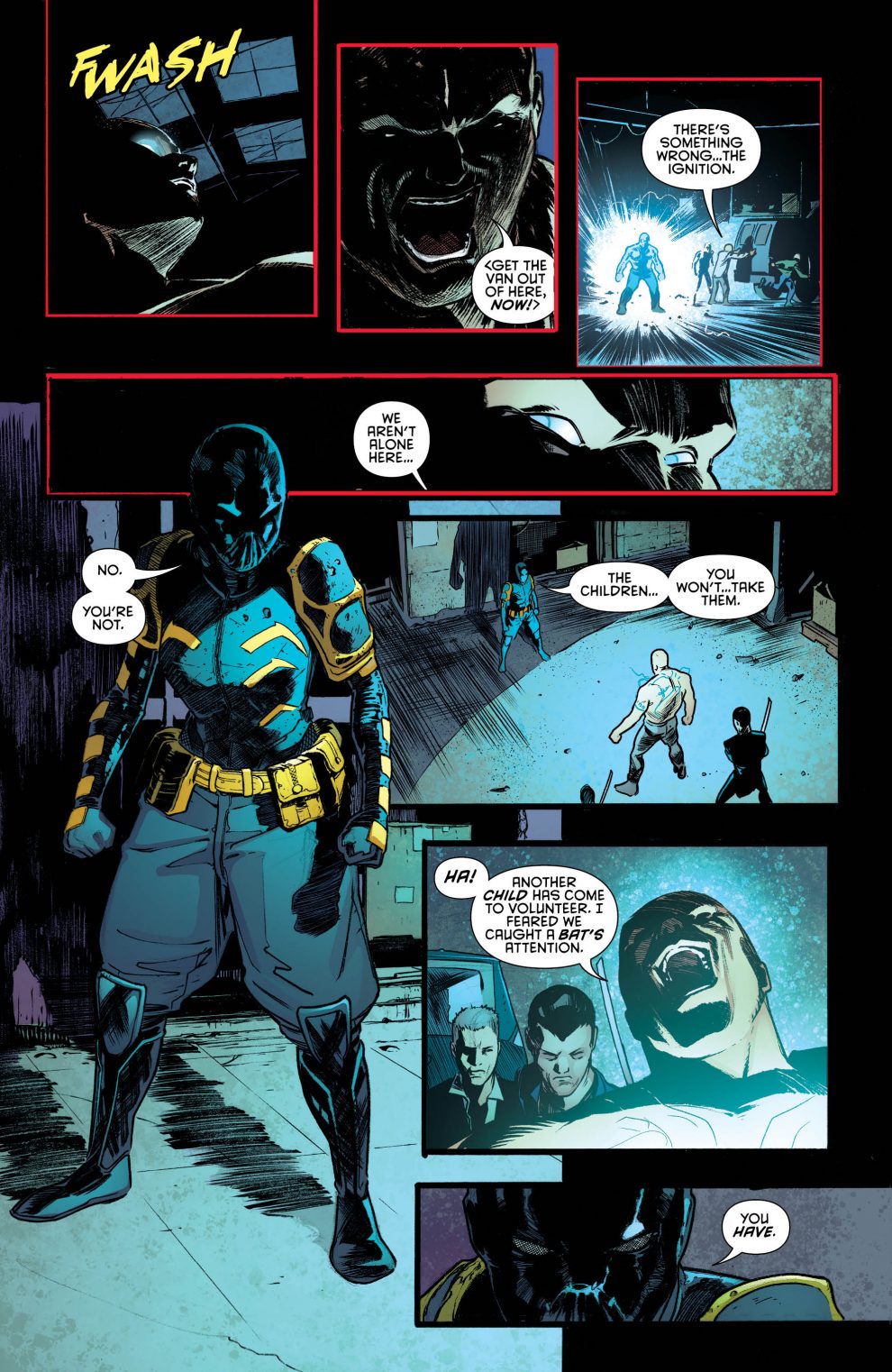 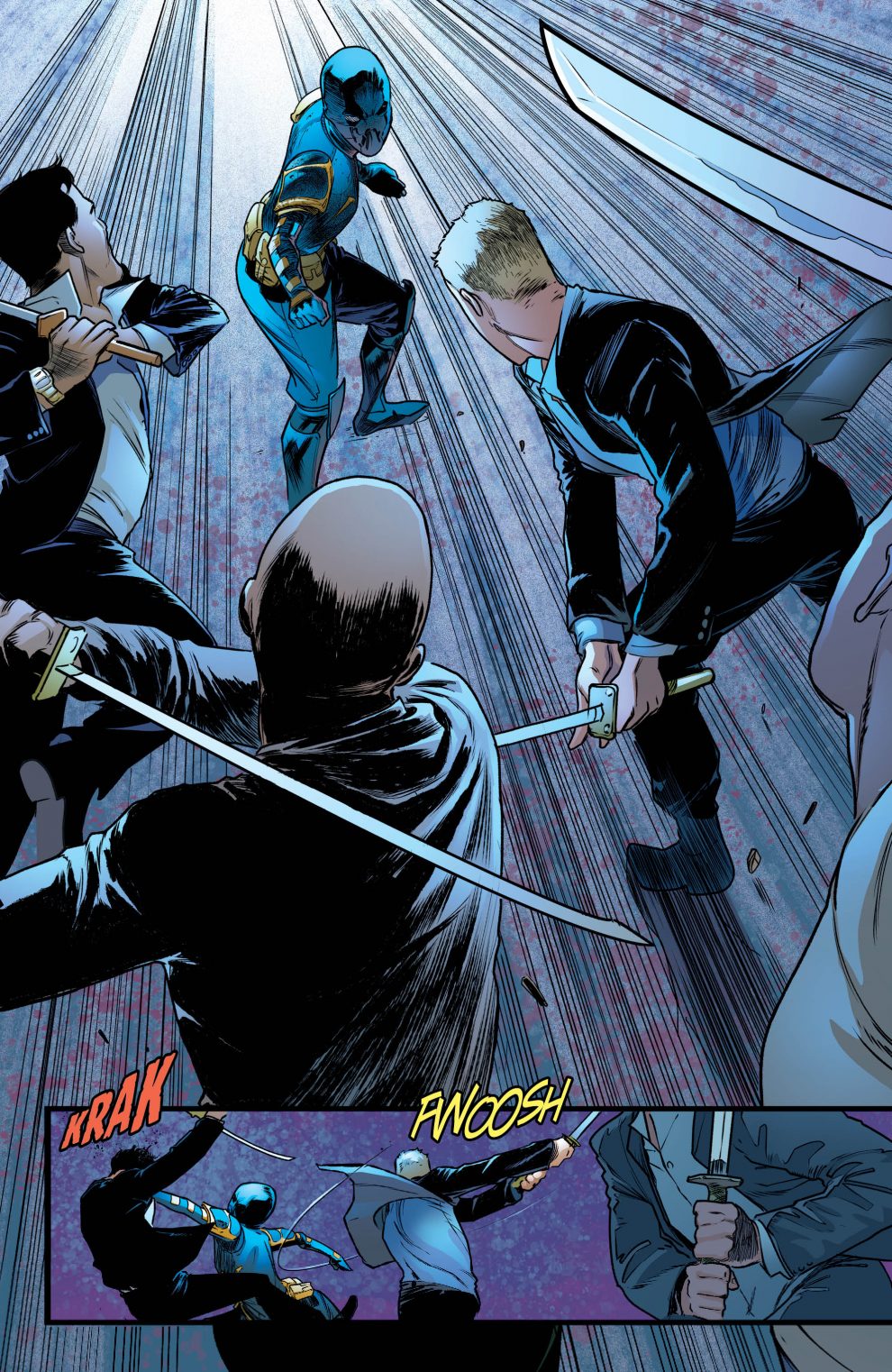 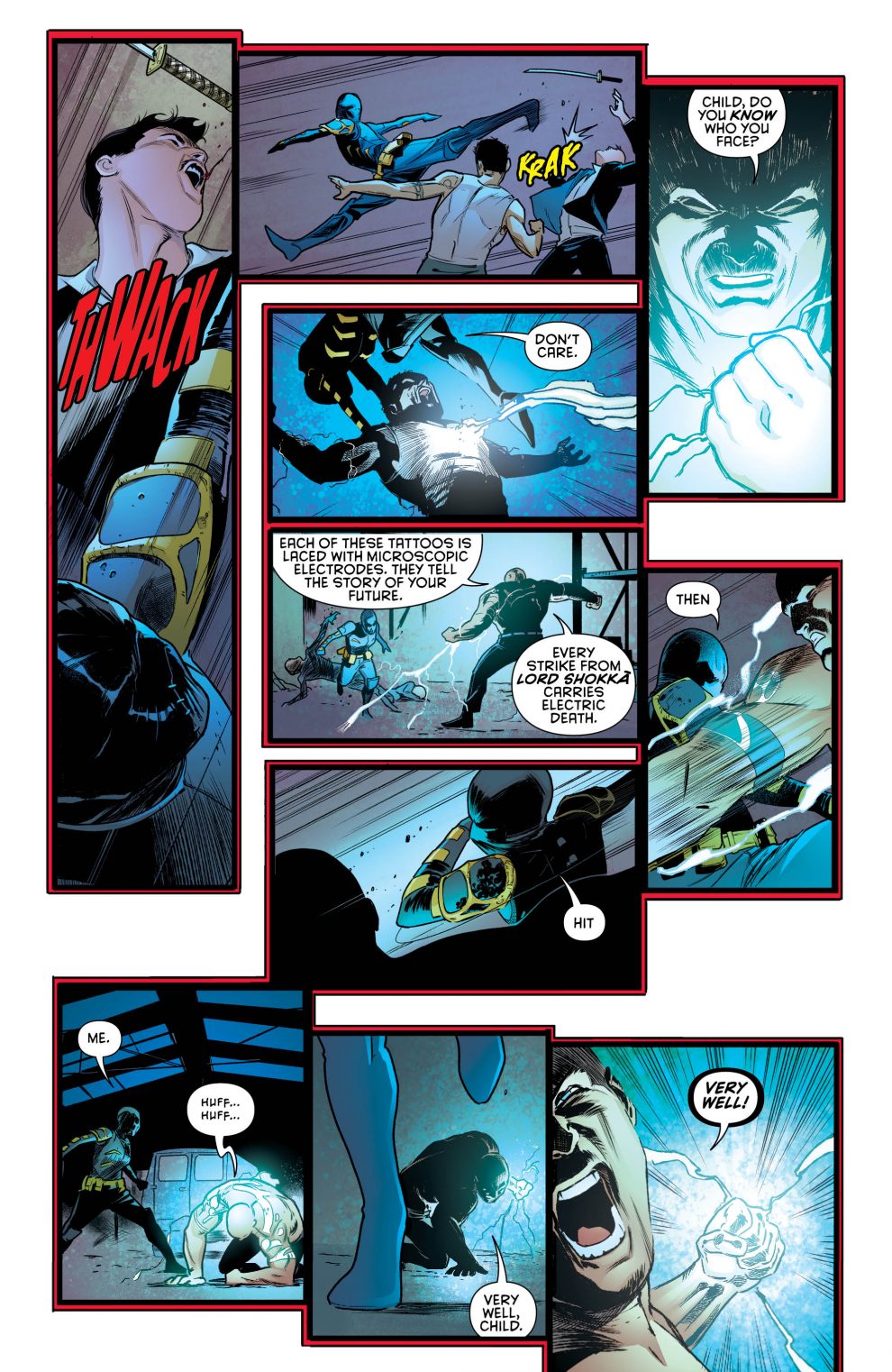 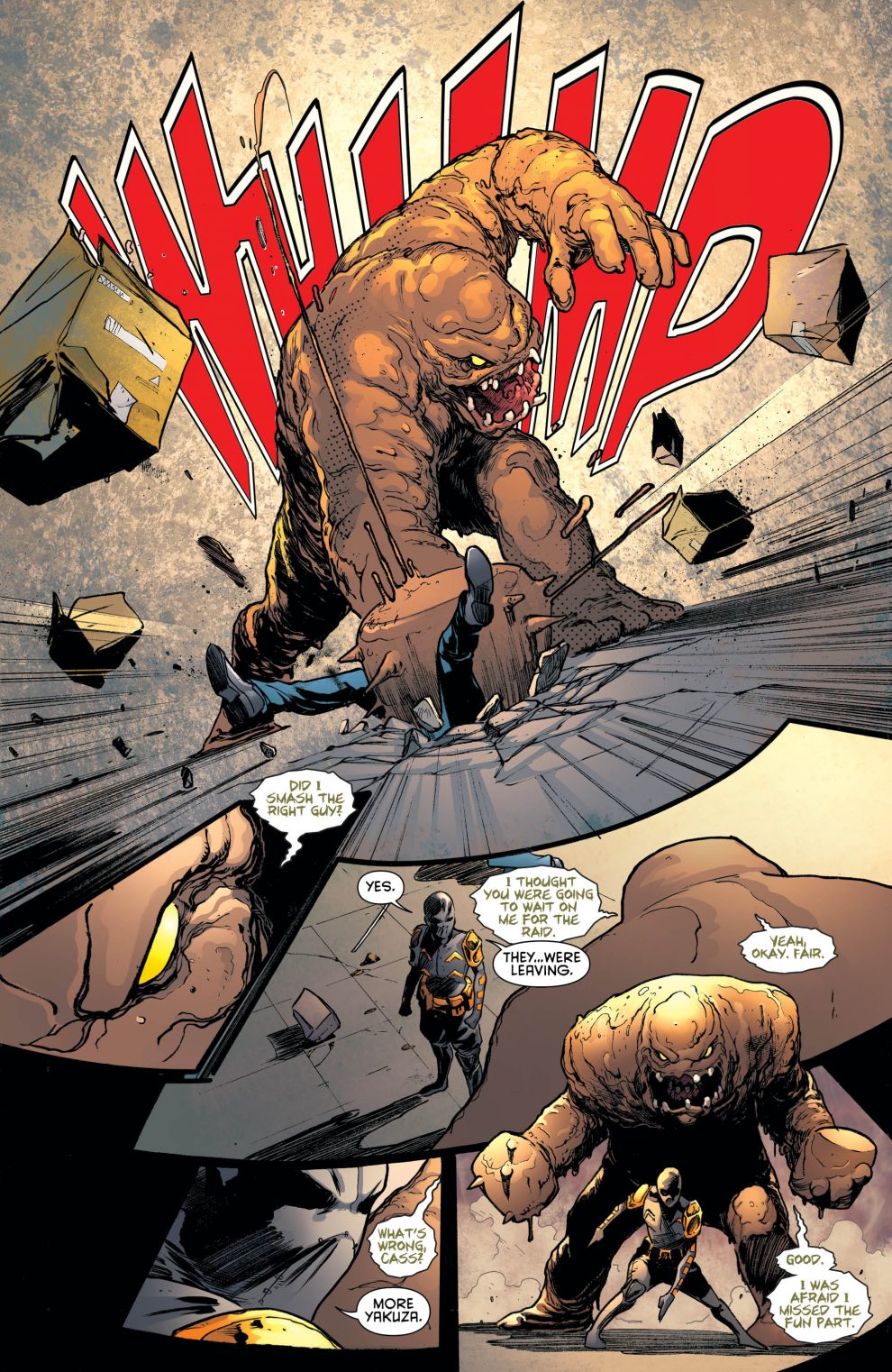 The glimpses into the recent past, with Cass fighting side-by-side with the now deceased Clayface, really tug at the heart-strings. James Tynion IV is really crafting drama of note. I would love to see the original script for this issue.
The way that Javier Fernández has drawn pages 6 and 7 (with that stunning wordless, final panel, showing an emotionally broken Bruce Wayne hunched over his workspace in the Batcave) is absolutely sublime.
I’ve followed Mr. Fernández’ DC Comics career since first seeing his work in Batman Eternal. His art on Tim Seeley’s Nightwing run was superb, and I’m delighted to see him on one of DC’s flagship Batman books. Being half Spanish it fills my soul with patriotic joy. Here is another amazing talent from my motherland receiving international success.
Detective Comics has been the launchpad for many stellar Spanish artists. Javier follows Carmen Carnero, Álvaro Martínez, and Raül Fernandez onto the list of my compatriots that have worked on this amazing title.
Javier Fernández’ style is gritty, kinetic, and super atmospheric. I also love the fact that I first experienced his work in Batman Eternal, and he’s found a home on Detective Comics with “Batmen Eternal.” Cyclical… nice. If his debut on this book is anything to go on, I’d LOVE to see him return. Brilliant stuff. 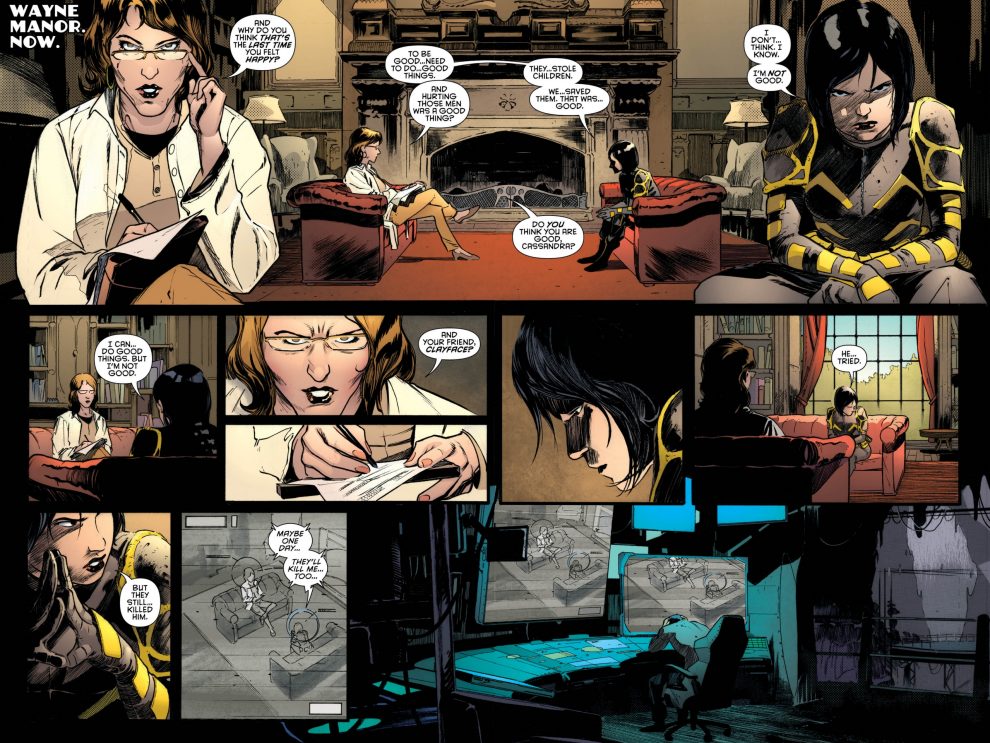 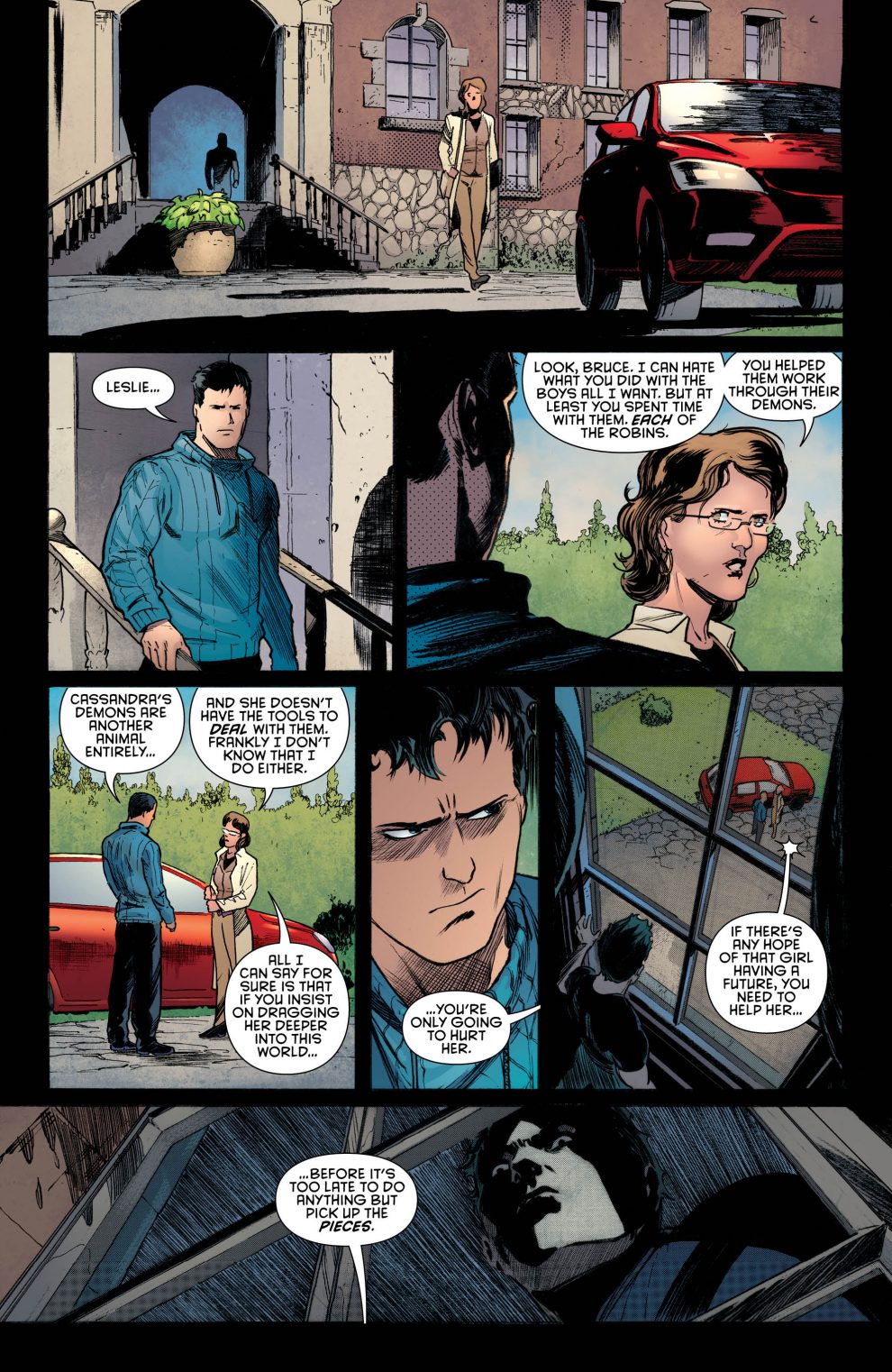 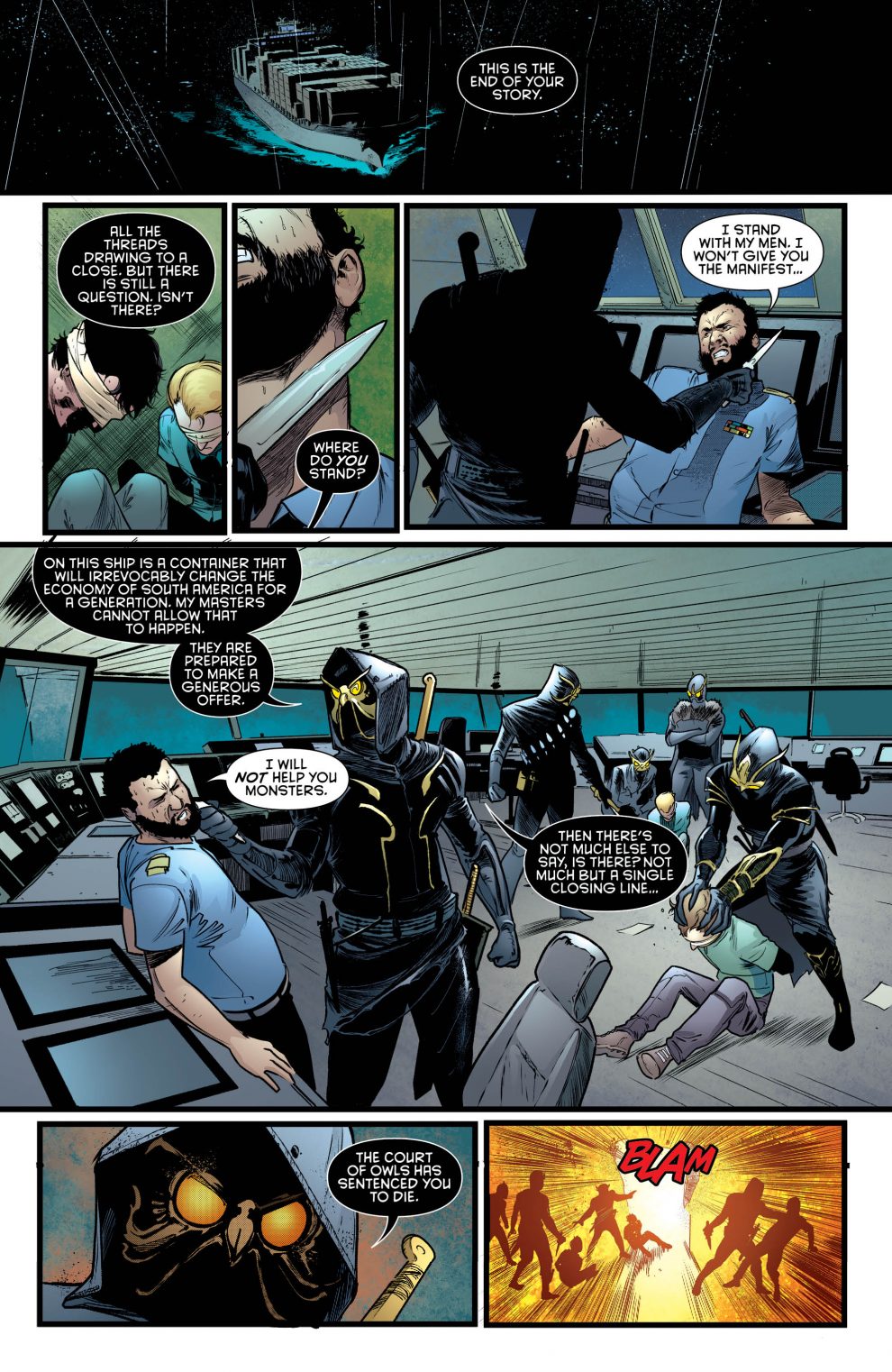 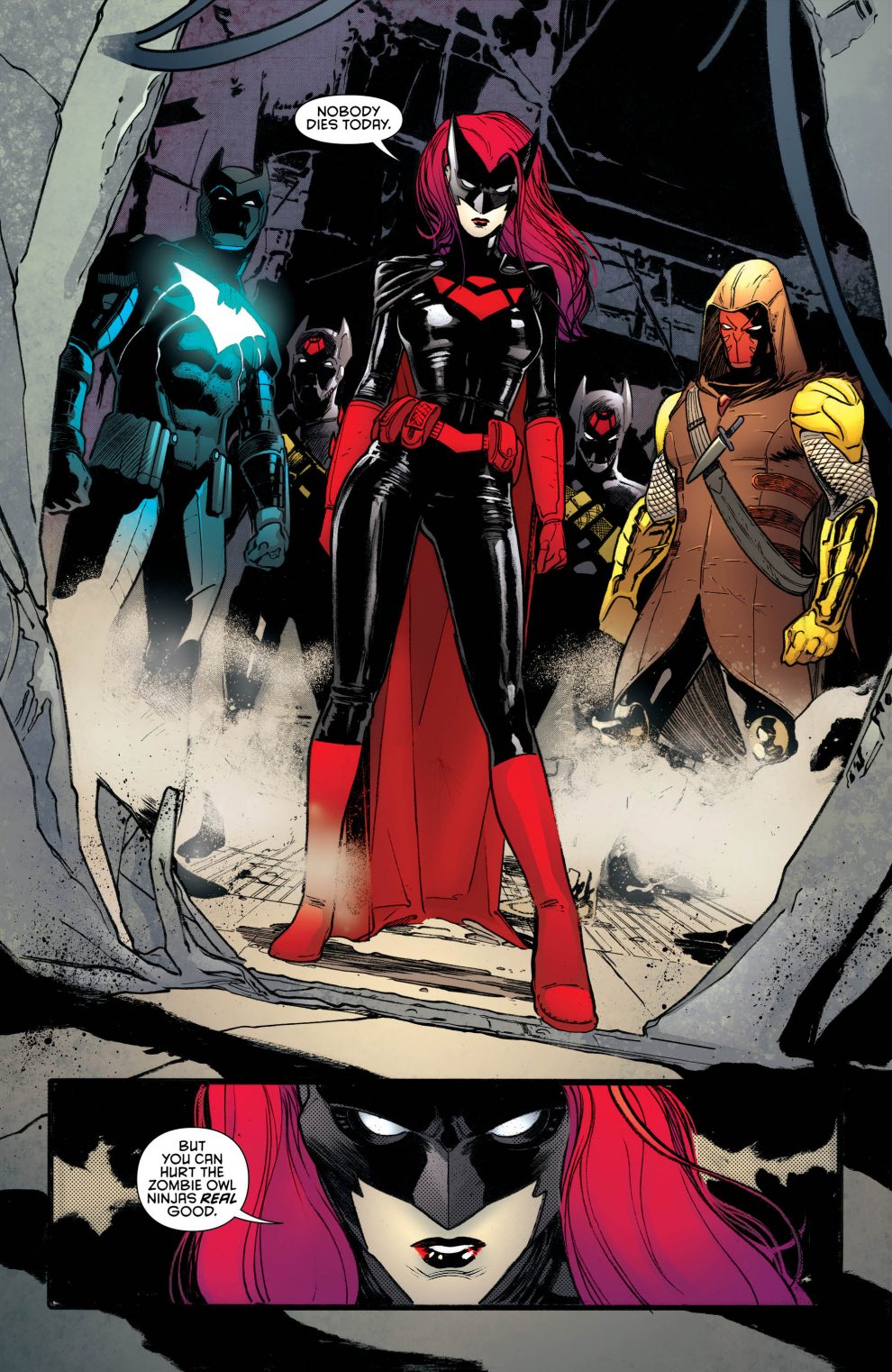 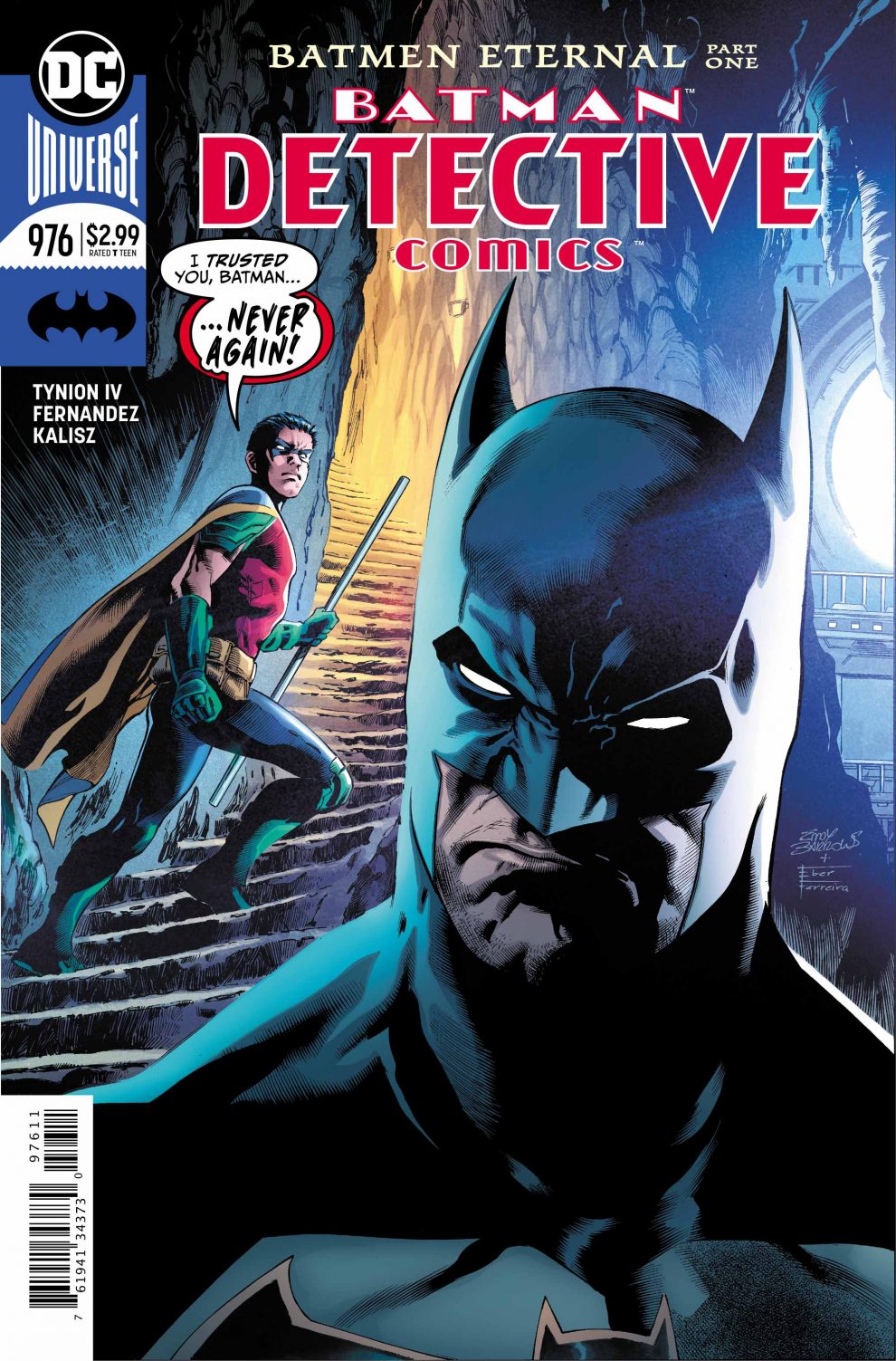 With the team fracturing, Kate’s leading Batwing and Azrael away, Cassandra’s turmoil, and Tim’s confrontation with Batman, I am concerned. The subtle hints at the cracks widening, like the Bat-Signal cover, and Kate’s new costume literally having a broken bat on it, are masterfully handled.
John Kalisz’ subtle, muted color pallette in this issue helps enhance the feelings of dread, and despair. His pairing with Javier is great, as they bring out the best in each other’s work.
As always, Sal Cipriano’s work is bodaciously bubbletastic. I grew up reading comics that had dialogue on the front, and it really took me back seeing a speech balloon on the main cover for this issue. Another lovely touch.

I don’t know how James Tynion IV is going to end his extraordinary tenure on Detective Comics. I’ve honestly enjoyed his run on this book more than any, since the heady days of Grant, Wagner and Breyfogle.
Yeah, I’m old… deal with it.
I want to see my heroes reconcile, but with things as they stand the road ahead looks dark. The next two weeks are gonna be loooooong…