Dominaria dropped a few short weeks ago, and many people know how strong the set is. I'm fresh from a Grand Prix where a certain Colourless Planeswalker was in the winning decks of both the Standard and Legacy events. That's powerful magic from one set tearing through and building up new archetypes and expectations. I don't know about you, but I think I need to take a trip to the arena, bash some heads in, and take a load off.

Magic's newest Draft centric set, Battlebond sees two players face against another two players in Two-Headed Giant goodness. We've seen the new cycle of rare Lands, shown above, to be included in the set. While lacking the basic subtypes, meaning a Fetchland can't nab them, they still look to be very strong in the Commander format, aiming to come out untapped a great deal of the time, and great pickup for ally colour, or shard colour decks. 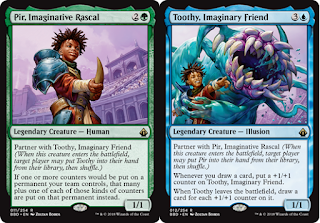 The most ambitious design from the set looks to be the expansion of the popular Partner mechanic from Commander 2016. Having two creatures lead your deck adds for interesting challenges and approaches in the deck build. As for these guys when you crack your packs with your buddy in Battlebond limited, the fact that they tutor each other makes them much more playable, and that they benefit the team regardless who controls who makes them very strong. Gavin Verhey, designer and manic-pixie-dream-person, ensures that Partners will appear in the same booster pack, so you're never left with half the combo, and both buds can be your commanders.

Smells like a new mechanic? Well it's a new mechanic giving off that scent. Being able to help cast your teammate's spells seems to be quite powerful. There's been many a prerelease where one of us was just a mana short off the thing to turn the tide, or letting their other head take all the action and just wanting to pass. Assist means you can literally assist the casting of a spell so you both get the value from either drawing a card or making a 7/5 trample. Even helping to activate on board abilities like that on the fan favourite, reminds me of Deadly Designs from Conspiracy 2. 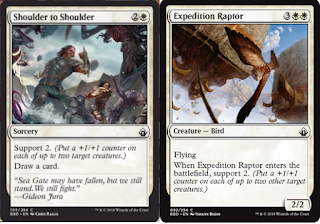 We were promised a high number of reprints in this set, and of the ones coming, I was certain to expect a return of the Support Mechanic. Originally seen in Oath of the Gatewatch, the original Two-Headed Giant set, I expect an expansion on the mechanic, as well as a hopeful reprint of powerful Support cards like Nissa's Judgement or even Press Into Service. 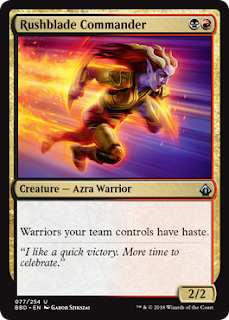 Now here's an interesting but understated uncommon. The more you read it, the more begins to unfold about the set and the setting. A blanket keyword for your whole team's Warrior creatures seems very strong at two mana on a respectably costed creature, and in aggressive colours. I imagine a set taking place in a gladiatorial arena will have a large number of warriors, making this a premium limited pickup. In terms of flavour, what's an Azra? New race to Magic, unique to the world of Kylem; they resemble the Tieflings of Dungeons and Dragons. More on this soon, I hope. 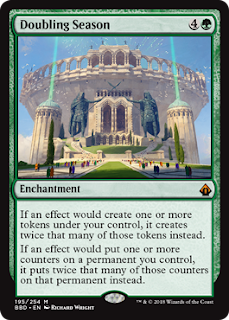 We found it, kids. We found the chase Mythic of the set. Commander players blow your cash on packs of this as Doubling Season, the card that made Mark Rosewater's name in design, is back with stunning artwork of the arena at Valor's Reach, and the correct new, Post-Kaladesh, oracle text.

My tiny mind cannot contain the excitement of the set, I snapped at writing it, then Wedge and The Professor put out videos that made my tiny nerd heart explode in rainbows and pain. 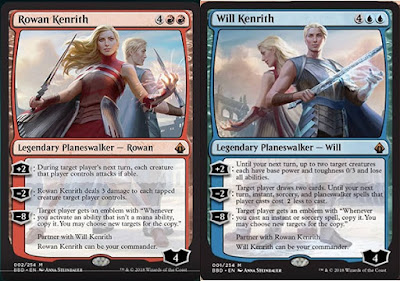 The unreasonably photogenic Will and Rowan Kenrith follow the likes of Daretti and Liliana as powerful Planeswalker Commanders. This is perfect timing on Wizards' part, as Commander 2018 is set to be focused on Planeswalkers, and having more Commander Planeswalkers in the format is a good thing for players to get used to. In terms of playability, six mana for four loyalty isn't amazing, but being able to +2 makes it a little better. Mister Will defends himself a little better, turning two enemy creatures into chumps, but there's certainly an advantage as Ms Rowan forcing some creatures in even if they don't want to attack. Her plus and minus do work very well, forcing an attack then Sweltering Suns-ing them.

Will's minus reads like absolute gravy to me. Drawing, making his (sister? wife?) cost 2 less as well as spells just reads breakable in a world where you can play him and then Expropriate on curve in Commander. Their emblems are ridiculous. Permanently twinning activations in Red means Zirilan tutors two Dragons - Purphoros becomes an on board Trumpet Blast (which I deeply expect a reprint of in this set). Twinning your spells forever, thanks to Will, just reads as abominable, and if you activate him after activating her, you get two emblems. You make 4 things 0/3s. The possibilities are endless.

Expect more commentary of the battles in Valor's Reach here on Fantastic Universes.