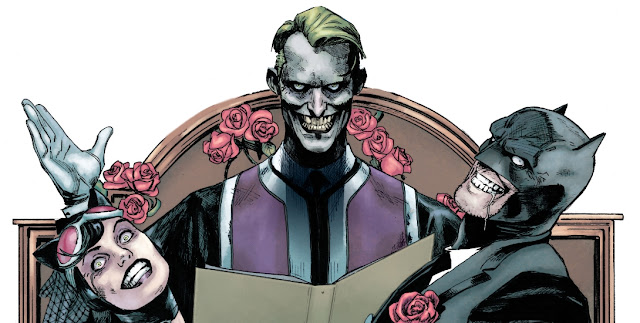 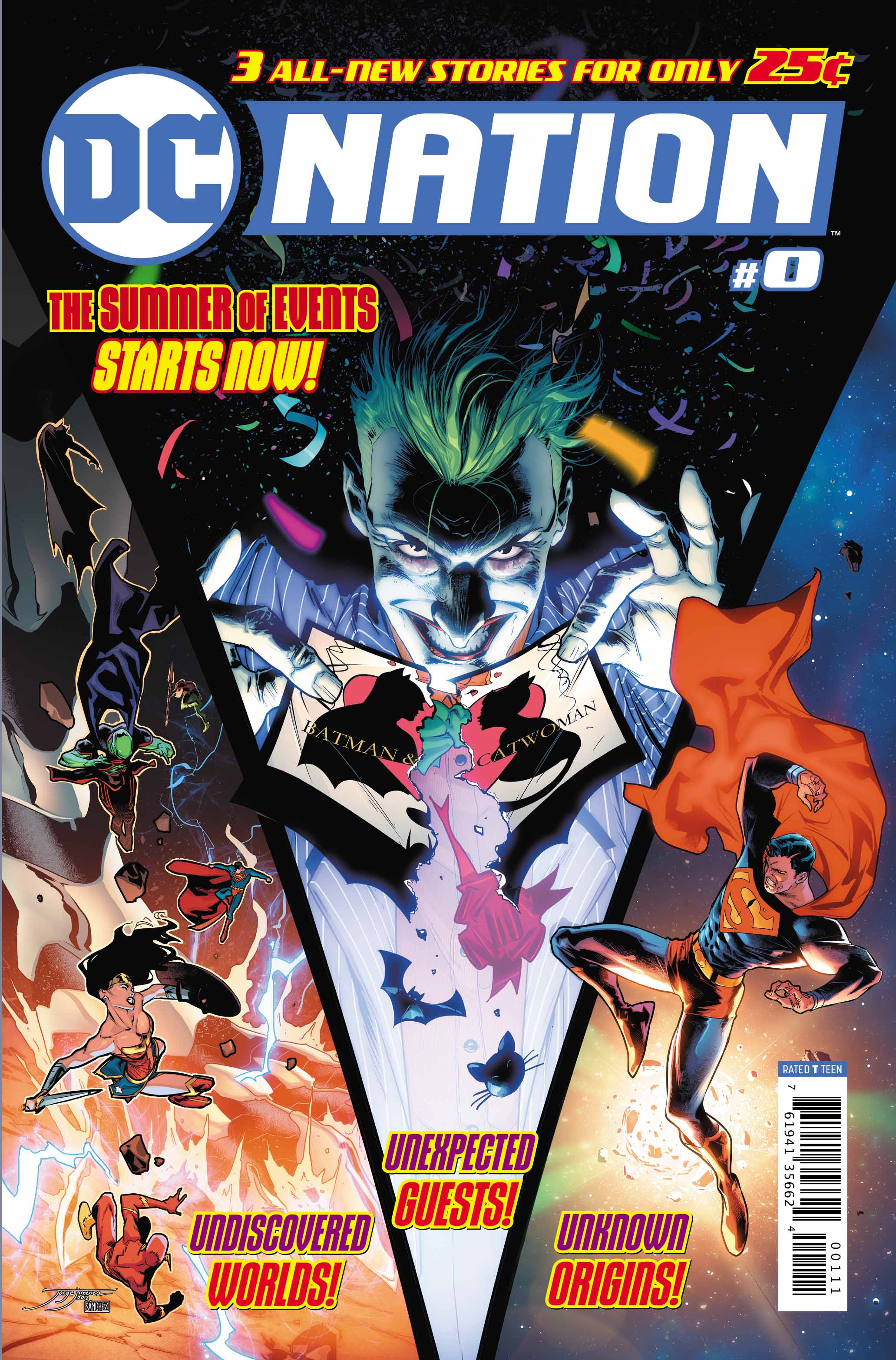 When I first previewed DC Nation #0, way back in February, I was excited. A Batman story, a Superman tale, and a Justice League adventure all in one book… for just 25 cents?!? Then, seeing the talents behind the stories, I thought there must be some mistake. There’s just no way us comics fans could be so lucky. What had we done to deserve this?
The months passed. Tom King got Batman engaged, Scott Snyder rocked us all out with some cosmic Metal, James Tynion IV got Batman’s family all in a kerfuffle, Josh Williamson made life Flash before our eyes, and Brian Bendis began plotting Superman’s future.
So… was this comic worth the wait? You bet your sweet Bat-Tushy it was! 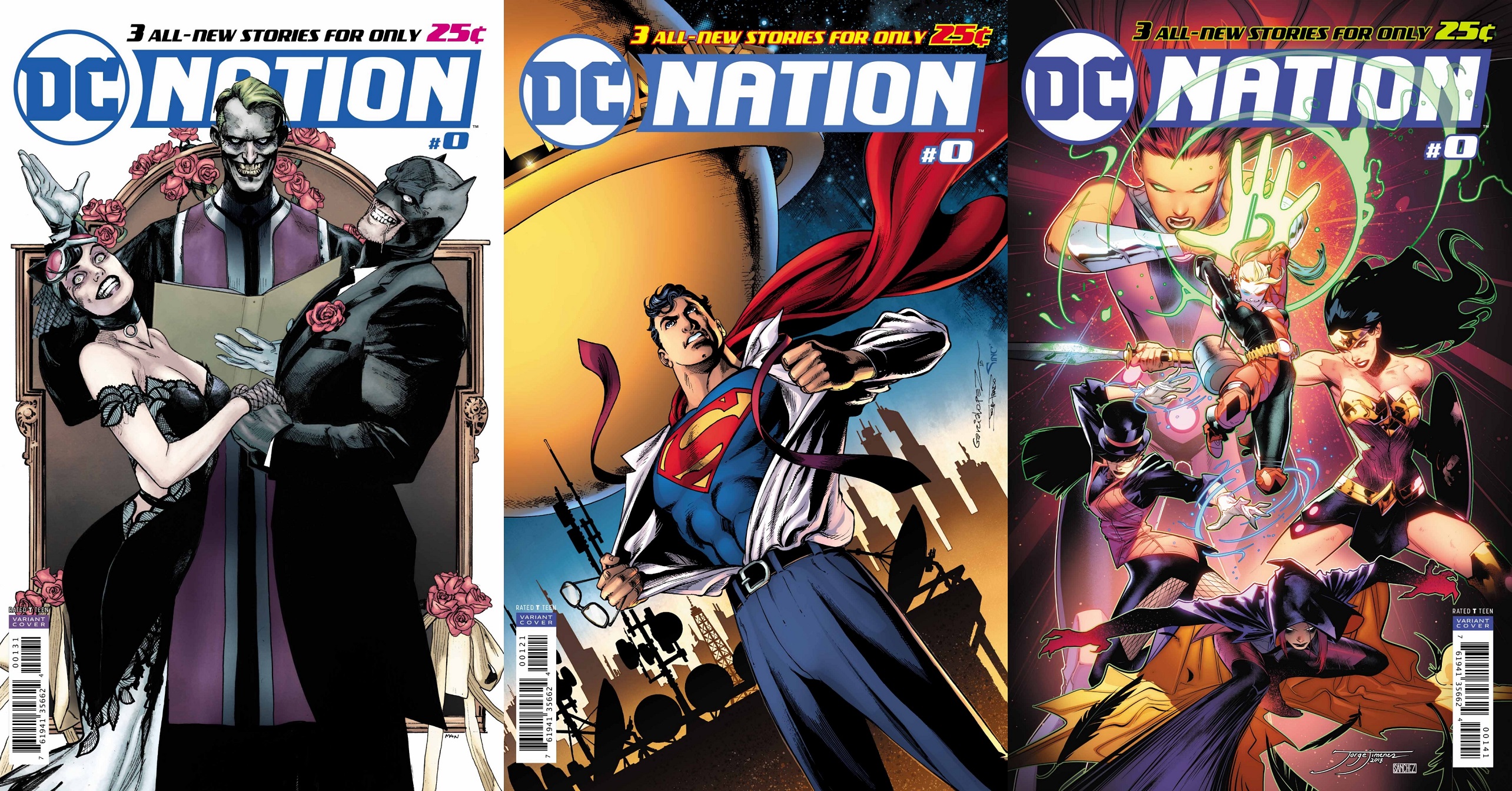 It Takes A Nation of Zero To Hold Us Back

This issue is a dream of a read. It’s also the perfect gift for someone who wants to collect comics, but doesn’t know where to start.
It begins with a psychological thriller in “Your Big Day”, where the Joker moves into a poor unsuspecting schmoe’s apartment to wait for his invite to the Bat/Cat wedding. Tom King’s script is taut, harrowing, and funny in equal measure. Clay Mann’s Joker is truly terrifying. No, I mean it. The splash page, and the fourth panel of page five… chills. Jordie Bellaire’s gorgeous color art enhances the tension and adds a whole extra layer of realism to the narrative.
Then we get the Superman tale “Office Space” that leads us neatly into the weekly “Man Of Steel” series. It’s got action, but also gives readers a sense off dread and foreboding. What’s happened to Lois and Jon? Why is the Man Of Steel acting this way?
For me one of the absolute highlights of the DC Rebirth was Peter J. Tomasi and Patrick Gleason’s run on Superman, so Mr. Bendis has very big shoes to fill. Though, if this story drawn by the legendary José Luis García-López, inked by Dexter Vines and colored by Alex Sinclair is anything to go by, then we’re all in for a treat. 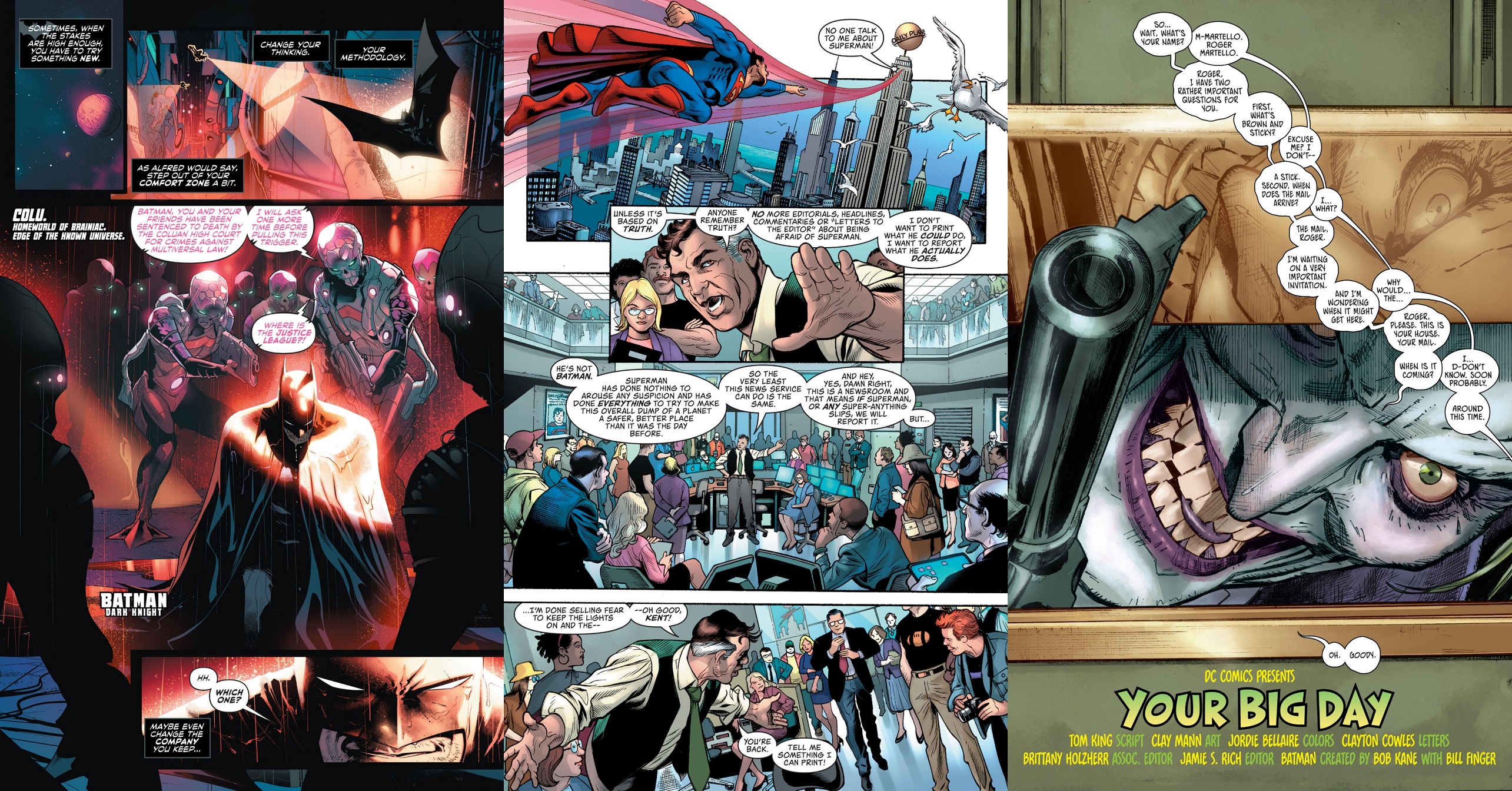 There’s No Justice… There’s Just Us

The issue closes with a cosmic, and visually stunning Justice League story, “No Justice: Prelude.”
This tale is, quite literally, out there! As a direct sequel to the bonkers but brilliant “Dark Nights: Metal” this story shows the audience some of the after effects of that inter-dimensional event. The Source Wall marked the very boundary of the known DC Universe for untold millennia in comics time, and for over fifty years for readers. The incursion by Barbatos and the Dark Batmen broke the barrier which could (and should) not be broken, and what was on the other side has noticed.
I don’t know who wrote what, but Snyder, Tynion and Williams have really got me excited. Where the first two stories in this book are personal thrillers, this is pure comics magic and fantasy. Jorge Jiménez’ art with color by Alejandro Sánchez  is as good as it gets. I think that Jack Kirby would be proud.

This is one of the best FCBD issues I’ve ever had the pleasure of reading. “It’s NOT free, though!” I hear some of you cry. It is free on digtal platforms, so please check it out. If, like me though, you prefer to hold a physical comic in your hands, you will not find anything anywhere of equal quality for 25 cents. Trust me, I’m a professional.