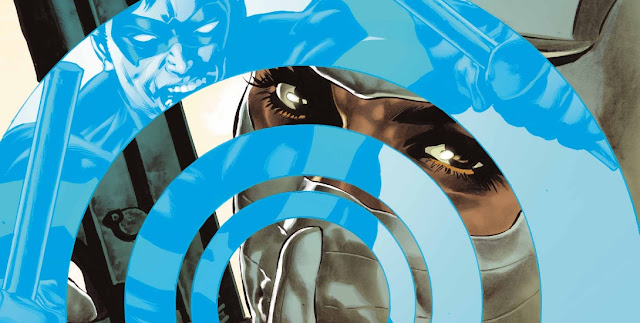 “HARM’S WAY”: PART TWO. Nightwing has been driven into a nexus between realities by The Silencer. Is she friend or foe? Can our hero win the race to save his friends, trapped in cyberspace by the evil Wyrm? Or will Professor Pyg, El Flamingo and Leviathan’s assassins take him out first? Fire up your engines, folks. It’s all happening in Nightwing #49.

This issue truly is firing on all cylinders. Benjamin Percy has given us a comic that would work in any era of DC Comics’ 80 year history, but with all the flourish, depth and characterisation that 21st century comics fans have come to expect. Being a regular reader of Silencer’s ongoing book, I knew that she was one of the goodies, but I have read a lot of reviews for issue #48 where writers were expecting her to be gunning for Nightwing. Sometimes being an uber-geek really pays dividends.
Newcomer – and a talent to watch – Amancay Nahuelpan has actually drawn an even better issue than his last one! I can almost feel the g-forces of the high speed motorbike chase. The scenes with Nightwing performing cycle hopping aerobatics are totally awesome! Man, I’d love to see stunts of this kind on the big screen one day. Come on, Nightwing movie! Fans need this stuff in live-action!

None whatsoever. This comic shows us just how awesome Dick Grayson is, and along with the previous instalment and the terrific work of Tom King over on Batman, will lead us into an all-new era for Dick Grayson.
I truly hope that colorist Nick Filardi stays on this book after the change of creative teams. This fella adapts his style to fit the art and his work on this issue is brilliant. Letterer Carlos M. Mangual has the unenviable task of sticking text all over this glorious artwork, but like a true pro his art fits the finished pages like hand in glove.

Benjamin Percy has delivered a terrific penultimate issue to his short, but oh so sweet, run on Nightwing. If you’re a serious Dick Grayson fan, then I strongly suggest that you to pick up Batman issues #54 and #55 BEFORE reading Nightwing #50. This two issue story leads straight into both the next issue, and into Batman #56.
Trust me folks, this is something that you do NOT want to miss.