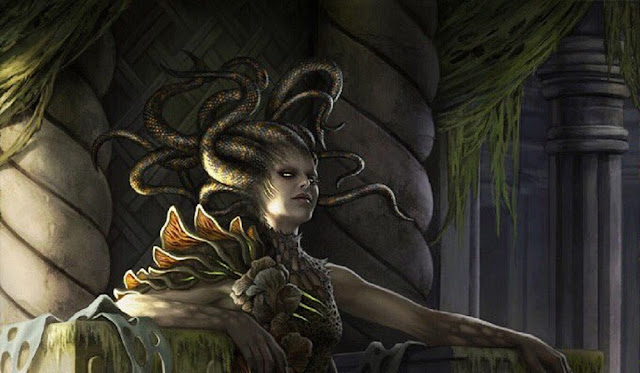 It seems like I posted yesterdays article, blinked, then the floodgates of spoilers came out while I wasn't looking. Lots to go over, so let's get to it.

Affectionately named the two-stones, these mana rocks will find themselves fixing mana in Limited for the rest of the format and find be welcome in Commander Mana bases for the rest of time. The legacy of mana rocks that you can break for cards is well upheld with the banners, cluestones, and now these. The distinctiveness of the art really stands out on each one, with wires, not rope on the Izzet, and the Boros resembling a military badge of honour. 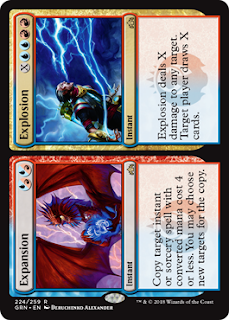 The Izzet contribution to the rare Split cards is as enigmatic as you'd expect from the guild. Expansion is a very narrow Fork, but these effects are very useful to the Mizzix or Melek player at the table. The Explosion half is a lot more interesting. Being able to do both halves of an Invoke the Firemind at Instant Speed is very very tantalising. May have to get this to replace Invoke in many decks. 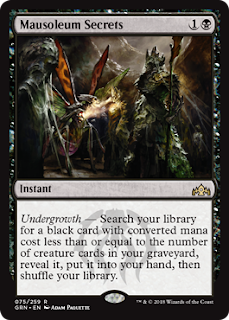 So this is accidentally the most powerful new Tutor Magic's printed in a very long time. A 2 mana Instant, that in the right deck, will get ANYTHING. Sure it has the restriction of Undergrowth checking a CMC, and a Black card only, but those don't sound like real downsides to a Commander player. 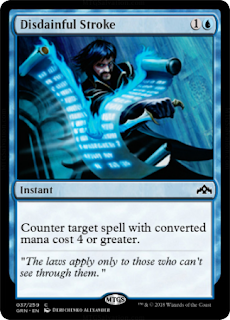 A rough translation courtesy of mtgsalvation.com shows us this reprint of Disdainful Stroke. Very useful to hose late game plays in Standard and control pricey spells in Modern, this is a welcome reprint. The artwork, a callback to Remand is a nice sight too. 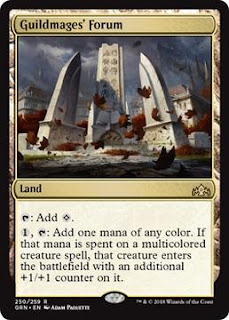 Kids, this is what a good Shimmering Grotto looks like. The downside of counters only going to multicolour creatures isn't a downside if they want the counters, like Master Biomancer, Animar, or Ghave. You can feel the collective excitement of every Atraxa player. 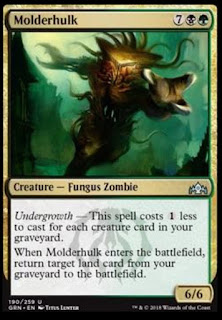 An uncommon 6/6 that can come down for less than its printed cost, and that ramps you with gone lands. Very nice in Limited and as an undercosted body in Sultai Muldrotha? 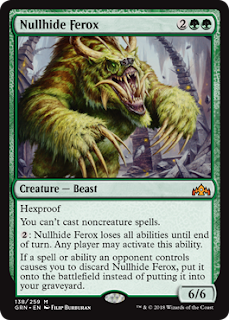 So a 4 mana 6/6 that taxes your opponents removal and forces you to play to creature combat, sometimes. Mono-Green is already a force of nature in the current Standard. With access to Llanowar Elves and a 2 mana dork in new Standard (probably Druid of the Cowl), then we're all going to stare down hexproof threats from this and Vine Mare on turn 3. Stompy! 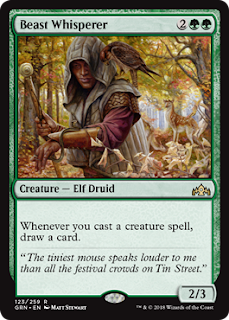 It goes without saying that this becomes a staple in every Mono Green, non-Azusa Commander deck, forever. That said, I secretly quite like this guy as a sideboard slot against the many flavours of coming control decks. Rotation means we're losing Lifecrafter's Bestiary, and though this druid is easier to remove than pokedex, I still think it may generate enough card advantage for Mono Green, or some Elves decks to win the race against control after sideboards. 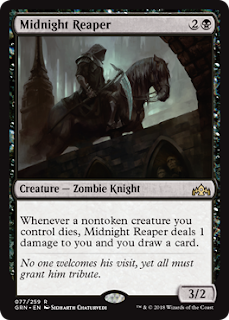 So the Witch-King of Angmar has shown up in Magic, and I approve. The zombie creature type makes him relevant with the loss of Lord of the Accursed. The looming presence of an aristocrats deck makes him the draw engine post board against control, killing your forces for power. 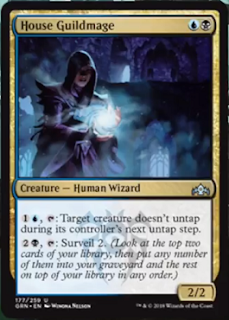 It wouldn't be Ravnica without a cycle of Guildmages. Similar to the gold border ones from Return to Ravnica. The distinction is their abilities are overall stronger and require them to tap. The Guildmages were always strong limited pickups and this looks to be the same. The abilities allow her to fix the topdeck with the powerful Surveil mechanic, or freeze an opponent's creature. Limited powerhouse for Dimir decks coming soon. 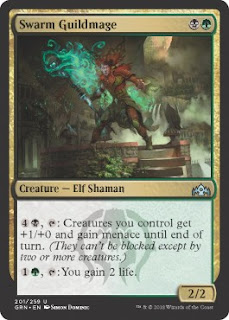 The Guildmage for the Golgari Swarm does what you would want for Golgari in Limited. To set up a stocked graveyard for effective Overgrowth triggers, you'll want to live to the long game, and gaining 2 life every turn cycle helps towards that. When the board state is big enough, a power boost and gaining menace is a game winning play in a limited game. 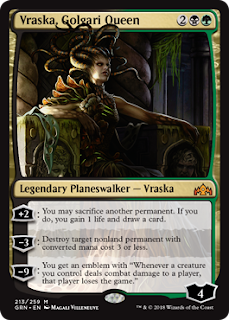 She's found her relic and now she's queen of the mausoleums. Long may she reign. This Planeswalker card is remarkable for many formats. Her plus is the sacrifice outlet that Standard has craved since we heard the Undergrowth mechanic. Commander players will feed her majesty Ichor Wellsprings and SadBots for a very long time. Her minus is straight up Abrupt Decay, and in a deck that also plays the new, mental, Assassin's Trophy, nothing lives on your opponent's board. Her ultimate; while most do something back-breaking that leads to you winning the game, truly wins you the game, by granting your creatures true deathtouch. In the unlikely event of you not having something to sacrifice, she pretty much enters as 4 mana for 6 loyalty. Her ultimate, if you never minus, doesn't send her to the graveyard after 4 turns. I'm in favour of saying that this is the second most powerful planeswalker in Standard.

Hail to the queen. We'll be back with more offerings to her majesty tomorrow.
Adam B Ray Adam B. ray Adam Ray Adam's Dragon Cave Magic Magic: The Gathering Wizards of the Coast