Week two of Guilds of Ravnica spoilers are here. With Prerelease coming next weekend, it's likely that as we're sitting down to FNM this week, we'll see the whole set unveiled. Until then, we can discuss and speculate about new cards shown off online. 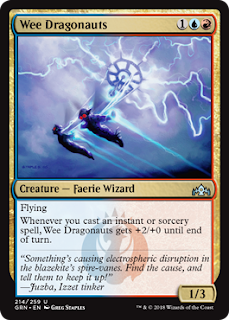 A classic returns to us. A welcome evasive threat in Limited, the Wee Dragonauts are certainly welcome, and with the number of aggressive Wizards in Standard, may have a place alongside Adeliz in aggro decks. 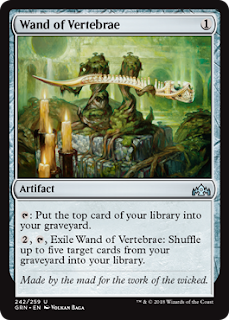 Well this is an interesting milkshake. Milkshake being a term popluarised by SBMtG, for cards that deliberately put cards into your graveyard (because milkshakes bring all the boys to the yard). This is definitely the enabler to get Golgari decks going in Limited. I don't know if this is the milkshake of Standard yet to come though. Perpetual Timepiece was a stronger repeatable milkshake that didn't get there when Delirium nor Muldrotha was with it in Standard. I doubt this will see the play when other, better milkshakes like the new Glowspore Shaman and Stitcher's Supplier are on the scene. 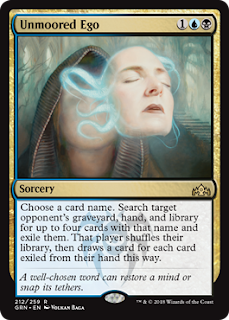 It's definitely very good to have a Lobotomy effect in Standard at any given time, given that Lost Legacy is leaving Standard. The way it's phrased and structured makes this one that can take four basic lands for the first time in this effect's history. With Assassin's Trophy in the format, taking basic lands for Trophy to replace might be interesting in a Sultai Control deck. It's more likely that this is for a sideboard of those Sultai or Blue/Black Control decks to hose any combos or pricey Control finishers in the mirror. 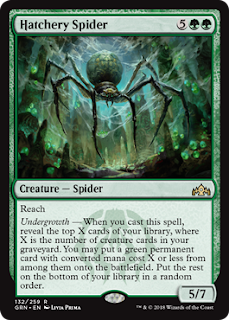 Ishkanah this most certainly isn't. I feel that, while the raw stats are very good and the potential card advantage gained by digging a high number in and probably getting some form of value would be good from this spider, you'd need a LOT of dead creatures to assure a live hit in a 60 card format. In Karador, Mimeoplasm, or Meren, this is a surefire value spider that you'll love to play. A bit of a flavour disparity strikes me at second reading. Why doesn't it put the found cards into your graveyard? Golgari card selection like this usually does, plus it would fuel further graveyard shenanigans. Odd. 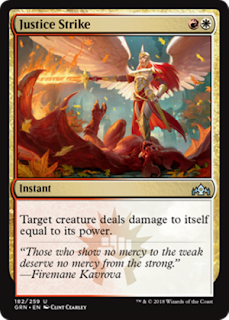 Now this is a removal spell and a half. The majority of creatures ever printed are equal power and toughness. With the exception of things with higher toughness, this is a certain way to have most creatures punch themselves to death. This would fill the removal slots that Lightning Strike and Lava Coil will hold in a Boros Midrange or Jeskai Control deck. 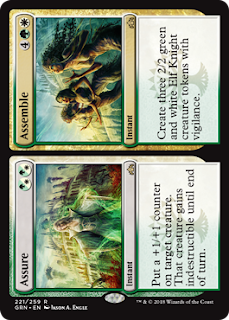 The unfortunately nicknamed Ass-to-Ass finishes the rare cycle of Split cards. Assure is most certainly not the second coming of Blossoming Defence that the format was hoping for. The permanent buff and indestructible is nice. A bigger buff and hexproof is better. The Assemble half will garner all the Avengers jokes at Prerelease, where making 6 power for 6 mana at Instant speed will certainly turn a game. As for Standard, this is good, but there's also March of the Multitudes. So... 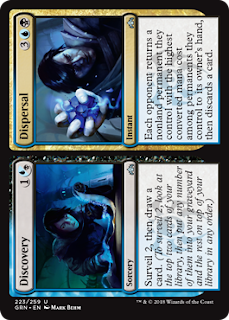 So the Dimir uncommon Split card reads a little crazy to me. Blue/Black Control will eat this UP. Discovery, though an extra mana, is Preordain. Preordain is banned in Modern because it's too good a Cantrip. Sure, a Control deck would rather cast Search for Azcanta on turn 2 than Discovery, but as a cantrip goes when cards are getting scant before casting a Chemister's Insight, a Preordain is a very welcome glimpse at the topdeck. Dispersal reads like a hell of a tempo play. Most of the time, the card with the highest CMC is the card you most want gone. To bounce the most costly card, then force a discard, reminiscent of Dinrova Horror when done late, at Instant speed no less, can lead to a tempo blowout. Best part, is that if it's a costly, hexproof permanent, this does not target, and to the hand it goes! 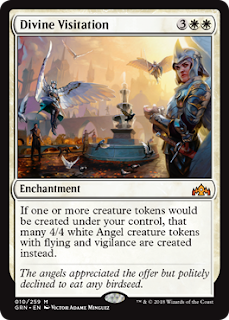 I'm not sure if this is good, but it's certainly funny. By turning the elf tokens Rhys sneezes out or Rith's Saprolings into angels them too makes most token armies a great deal more intimidating. 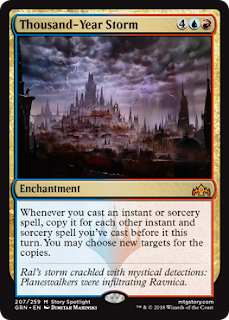 Sweet. Baby. Girl. I don't care how dumb or win-more this card is. This gives all of your Instants and Sorceries pseudo-Storm. I've heard this called the Spellslinger Doubling Season, and it's hard to disagree. This has achieved staple status in almost every Blue/Red/X Commander deck and is officially the card I am chasing hardest from Guilds of Ravnica.