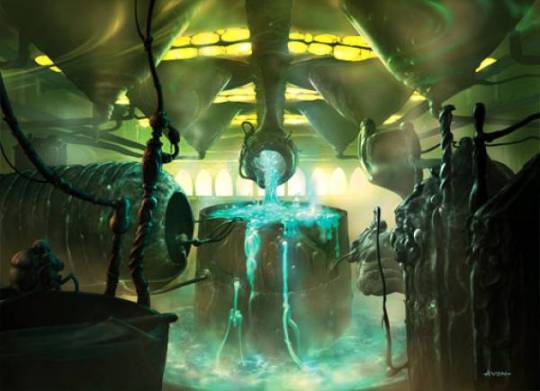 Momir Vig was the leader of the Simic Combine during the first block of Ravnica cards. He wanted to take the guild back to their roots, by improving the well being of the people of Ravnica, by mutating them with a strange substance, without their consent. He was killed by the ghost of Agrus Kos, and the Simic have been moving away from the practices and reputation that Momir had left on the guild.

Momir Basic is the format built around the flavour of this character. It doesn't really work in paper formats, only online where randomisers that digital formats like Magic Online and MtG Arena allow for.

Your deck in this format is all basic lands. You also have the Momir Vanguard card beside you, like an emblem. You can pay X and discard a card to Momir, and in his cytoplast factory in Novijen, he'll grow you a token that's a copy of any creature at that Converted Mana Cost. If you're playing on MtG Arena, it'll only be creatures in Standard, but for Magic Online, it'll be anything.

So what's the strategy for a format this deliberately random?

From here on, I'm going to be focusing on Arena, since that's the version I've played. If you're playing Momir on Magic Online, skew your deck towards more Swamps and Mountains (as those are good for activated abilities) and try to make 7 mana creatures.

On MtG Arena, your deck is 12 of each basic land (no customisation allowed sadly). The higher up the curve you go, the bigger the creatures in terms of stats and power. With no access to other spells, and no real need for Instant speed interaction since you can only have Momir make a guy on your turn as a Sorcery, most of the work is done as creature combat and threat assessment.

On Arena Momir, the prevailing strategy is to get to 9, and now as of Ravnica, 10 mana. There are 3 creatures in Standard with CMC 9: Arboretum Elemental, Molderhulk, and Zacama, Primal Calamity. If you can make and keep a Zacama, you probably win. His on board ability to zap things for 3 clears away so many things. Gaining life if you're behind really stems the bleeding. Any artifact creatures Momir made for your opponent get crushed by the naturalize ability. Being a 9/9 with reach makes flying over impossible.

Or, you can go to 10 mana and make Indestructible Impervious Greatwurms to be chump-blocked forever.

Certain bombs at 6, 7, and 8 mana also close out games very quickly. The later the game goes, the better on board mana abilities get.

Momir is a strange and wild format, where luck favours and hinders many, and you're left with an above rate vanilla creature you wouldn't be caught dead with in Draft can win through.

Catch me playing some Arena Momir down below.