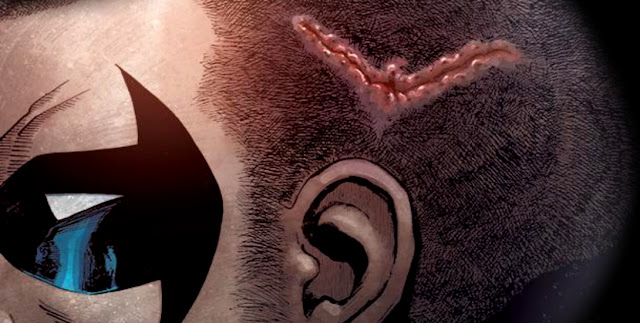 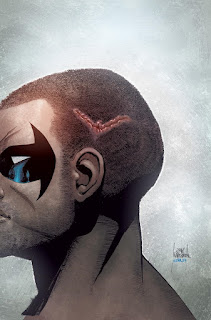 “KNIGHT TERRORS”: PART ONE.
STOP!
Before reading Nightwing #50 and this review, pick up and read Batman issues #54 and #55. You have been warned.
After winning the most cosmic motorcycle race ever, Nightwing returns to Gotham City to spend some time with his mentor, Batman. After re-connecting with his past, the reunion is cruelly cut short when the K.G.Beast fires a bullet into Nightwing’s skull. Yes, you read that correctly, Batman #55 ended with Dick Grayson getting shot in the head. That’s where this anniversary issue picks up.
I’ve known that these events were coming for a couple of months now, but actually witnessing them has taken my breath away.

I’m glad to say that writer Benjamin Percy has ended his – far too short – run on this title with real style. The book is split into two tales, which run parallel. The half of the book that’s set in the present in Bludhaven is drawn by the brilliant Travis Moore, while the look at Dick Grayson’s past is delineated by the dynamic duo of Chris Mooneyham and Klaus Janson.
I usually hate having two art teams on one book, but the styles match the feel of what goes on across the two different eras depicted in the story. We have Moore’s clean lines showing us the present, while Mooneyham and Janson’s grit brings us a previously untold tale pitting Batman and the original Robin against the Scarecrow.
The story is both joyous and heartbreaking. The happiness comes from learning that Nightwing has survived, but the pain comes from seeing the real and painful repercussions of the shooting. I’m not spoiling anything by saying that life will never be the same again, either for Richard Grayson or the Bat-Family as a whole.
I LOVE Mr. Grayson’s new career choice, and his car number is a clever and loving reminder of the origins of the first, best, and greatest comics sidekick of them all.
The color art of Tamra Bonvillain, John Kalisz and Nick Filardi is also exceptional, but I expect no less from these three incredibly talented artists. Carlos M. Mangual’s work is the only visual constant, because it runs throughout the whole issue. Once again, his artistry is impeccable and proves the benefit of having a professional letterer as part of a creative team.
Both script and art in this issue are of an incredibly high standard, but…

It’s clear that Benjamin Percy is leaving this book prematurely. While I am extremely excited by what DC Comics and new writer Scott Lobdell have planned for Mr. Grayson, Percy’s tale of technological terror and the dark web hasn’t been fully resolved. Where are Willem Cloke and Vicki Vale? Is Wyrm still out there? Look out for a lovely piece of graffiti scrawled on a wall in Bludhaven, which mirrors my feelings of frustration. Percy is a terrific writer and the way he’s written Nightwing, Batgirl and Batman in this issue clearly demonstrates his love of these brilliant, timeless characters.
I’m a little tentative about Scott Lobdell taking over this series as he has incredibly big shoes to fill, following Tim Seeley, Sam Humphries and Benjamin Percy. Lobdell is a fairly accomplished writer, but I would be lying if I didn’t say that I’ve been unimpressed by his work as often as I’ve enjoyed it; but, hey… let’s give the man a chance.

While Nightwing #50 is a terrific jumping on point for new readers (of which I’m hoping there will be many) fans who’ve been following Benjamin Percy’s run will probably be feeling as let down as I was that he wasn’t allowed to complete his story arc as he would’ve wanted to. I hope that the next Nightwing annual, or better yet a Nightwing Vs. Wyrm mini-series, gives him the chance to bring us Dick Grayson’s final adventure.
Dick Grayson is dead, long live Nightwing. 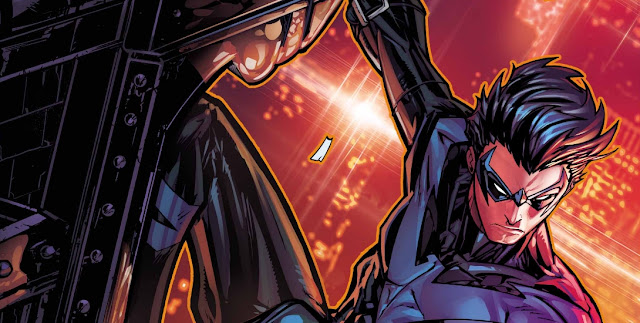