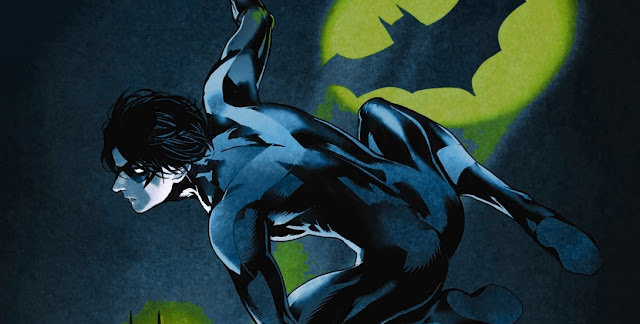 “KNIGHT TERRORS”: PART THREE. Dick Ric Grayson is a troubled soul. He’s a highly trained martial artist and former crime fighter, but can’t remember that aspect of his life. His remaining memories involve travelling with the circus, walking the high wire, and swinging on the flying trapeze. In Nightwing #51 after being attacked by a mugger, his years of fight training kicked in. The criminal went from aggressor to victim, after receiving a brutal beating at Grayson’s hands. This left Ric contemplating his actions, and his entire life moving forward.

There’s really not a lot to complain about here. I know that this recent turn in Nightwing’s life has upset many, but I’m loving the direction this story’s headed in. Ric Grayson, deep inside, clearly remains the man he always was, and the hero that we all love.
Many fans likening him to Jason Todd should really pick up this issue. Had Todd been the one that handing the beat down to the mugger, things would have turned out very differently. Does anyone out there see Jason calling an ambulance, and then sticking around to make sure that the street hood – a violent criminal – got picked up OK?
No… I didn’t think so.
Whatever name he may be going by right now, Ric Grayson is the real deal.
Scott Lobdell’s plot, brilliantly scripted by Fabian Nicieza, is moving along at a steady, and highly thought provoking pace. The Scarecrow’s threat is slowly building, as is Detective Sapienza’s. Last month the cop found Nightwing’s former base and appropriated the hero’s costume. Just the idea of a gun-toting Nightwing intrigued me. It seems though, that our hero’s old uniform isn’t the only thing Sapienza took from the bunker. A look at the cover art, attached above, will show you what I’m talking about.
It’s also great seeing Chris Mooneyham back this issue. I loved his work when Benjamin Percy was writing the book, but his style is more suited to this gritty crime thriller, than it was to the techno threat of Wyrm and the dark web. The art in this issue is the kind that I love. Strong storytelling, powerful visuals, dynamic action… the whole nine yards. The icing on the cake is that Mooneyham also delivers great character, facial expressions, terrific pacing, and anatomy. Yep, I’m a Mooneyfan.
As always color artist Nick Filardi and letterer Deron Bennett take the story, script and art, put them on a low heat and cook them to perfection. Check out the blood red skies, the falling rubble and the honking horns, near the end of the issue, to see what I’m talking about.
Yummy.

I have a gripe, but it’s not about this specific issue, but more about this run in general.
Nightwing has two incredible talents handling the art every month; Chris Mooneyham and Travis Moore. I love the work these guys give us, but…
Having this issue drawn 100% by Chris Mooneyham made me very happy. Having last issue by Travis Moore made me happy too… but when the collected edition comes out, swapping styles between chapters isn’t going to make me happy at all. Picking up a single issue with different art teams bugs me, so, by that token, I believe that having the collected edition alter drastically chapter by chapter will be jarring for many, not just me.
Travis and Chris are both exceptionally talented artists, but their styles are polar opposites.
Maybe I’m being too fussy, but for me it’s a concern.

Yes, I’m really enjoying this new direction. Ric Grayson always has been and always will be one of the greatest heroes in comics. His journey of rediscovery, plus having to deal with darker versions of his former persona, will eventually lead him back on the path of righteousness… I know it will. In the meantime, though, we’re going to get some fresh, thrilling and truly innovative new Nightwing adventures.
Bring ’em on!