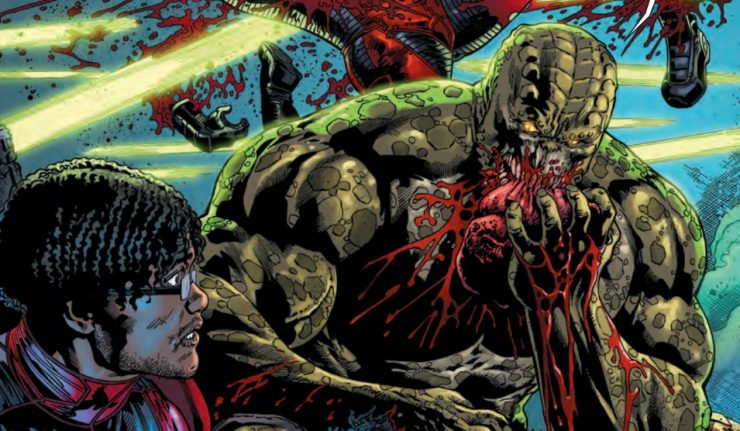 “The Chosen One” - Part One 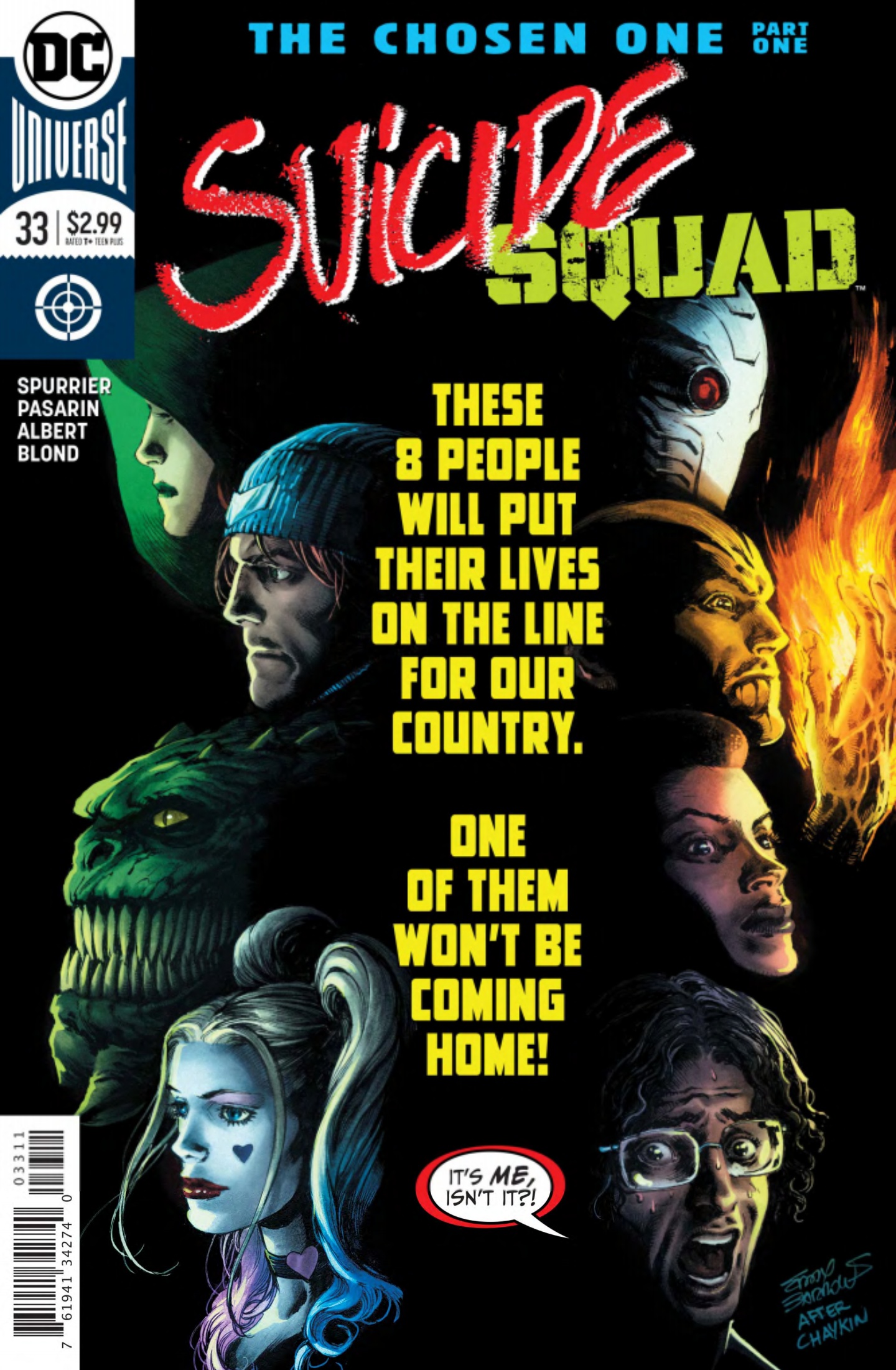 
Artists: Fernando Pasarin & Oclair Albert
Review by Philip Clark
What a story to come into as my first comics review. The way that Si Spurrier has written this issue of Suicide Squad is such a fresh new way of writing a comic, and definitely not a style that I have ever had the pleasure of reading previously. Matched with the artwork of Fernando Pasarin and Oclair Albert and this comic has quickly established itself as one my favorite current titles.
The first page sets the story up perfectly for the rest of the comic. Spurrier does a fantastic job of gripping the reader from the get go. Introducing us to Juan Soria, the most important unimportant character to grace the pages of a comic. In fact, you could be forgiven for thinking you had stumbled across a Juan Soria comic that just so happened to include Suicide Squad characters.
Pasarin and Albert have done a fantastic job keeping with the pace of Spurrier’s writing. Ninety percent of the panels are heavily populated with characters and action. This does not however, take anything away from each individual’s expressions and complexity of emotions that the characters portray. 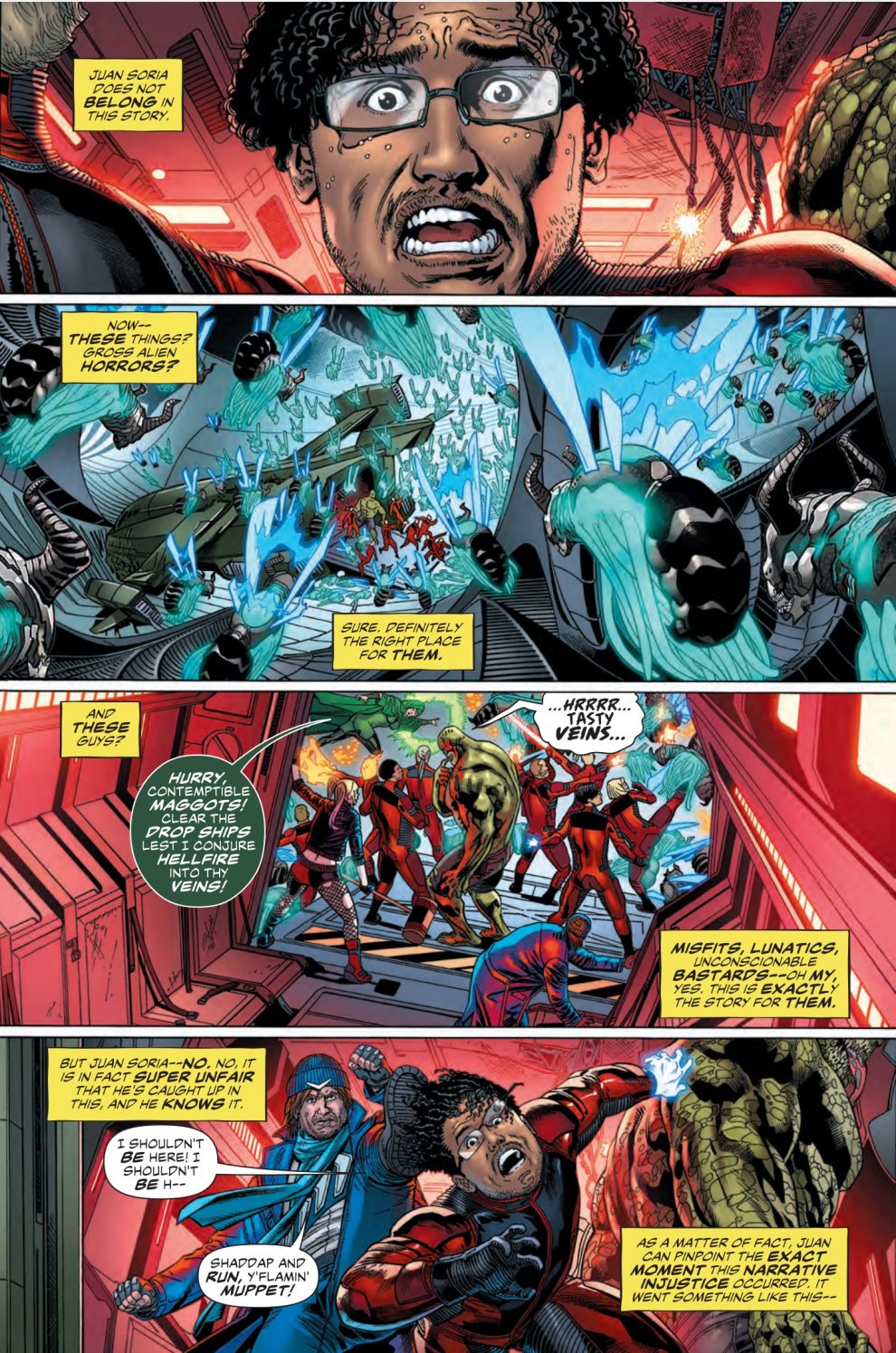 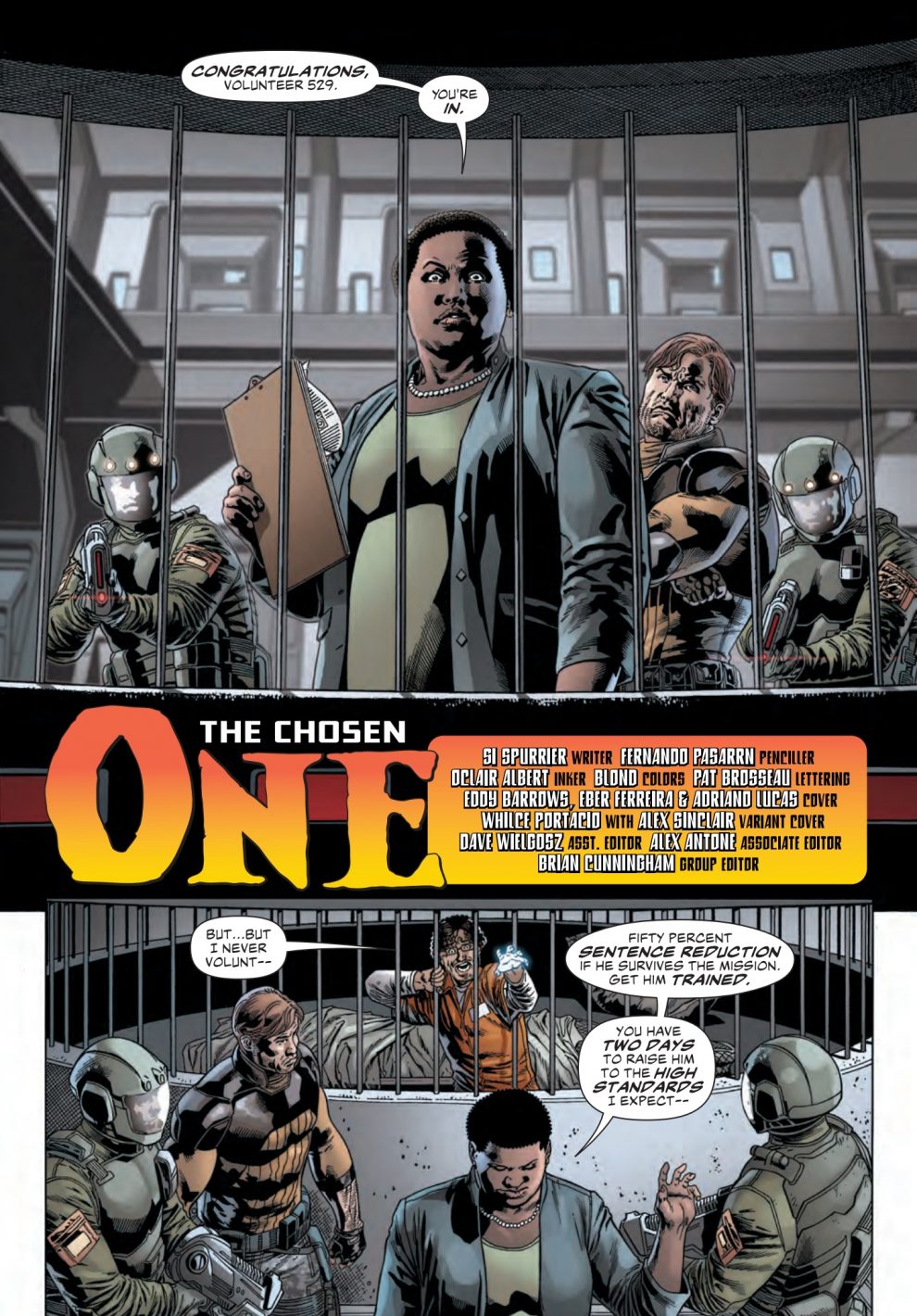 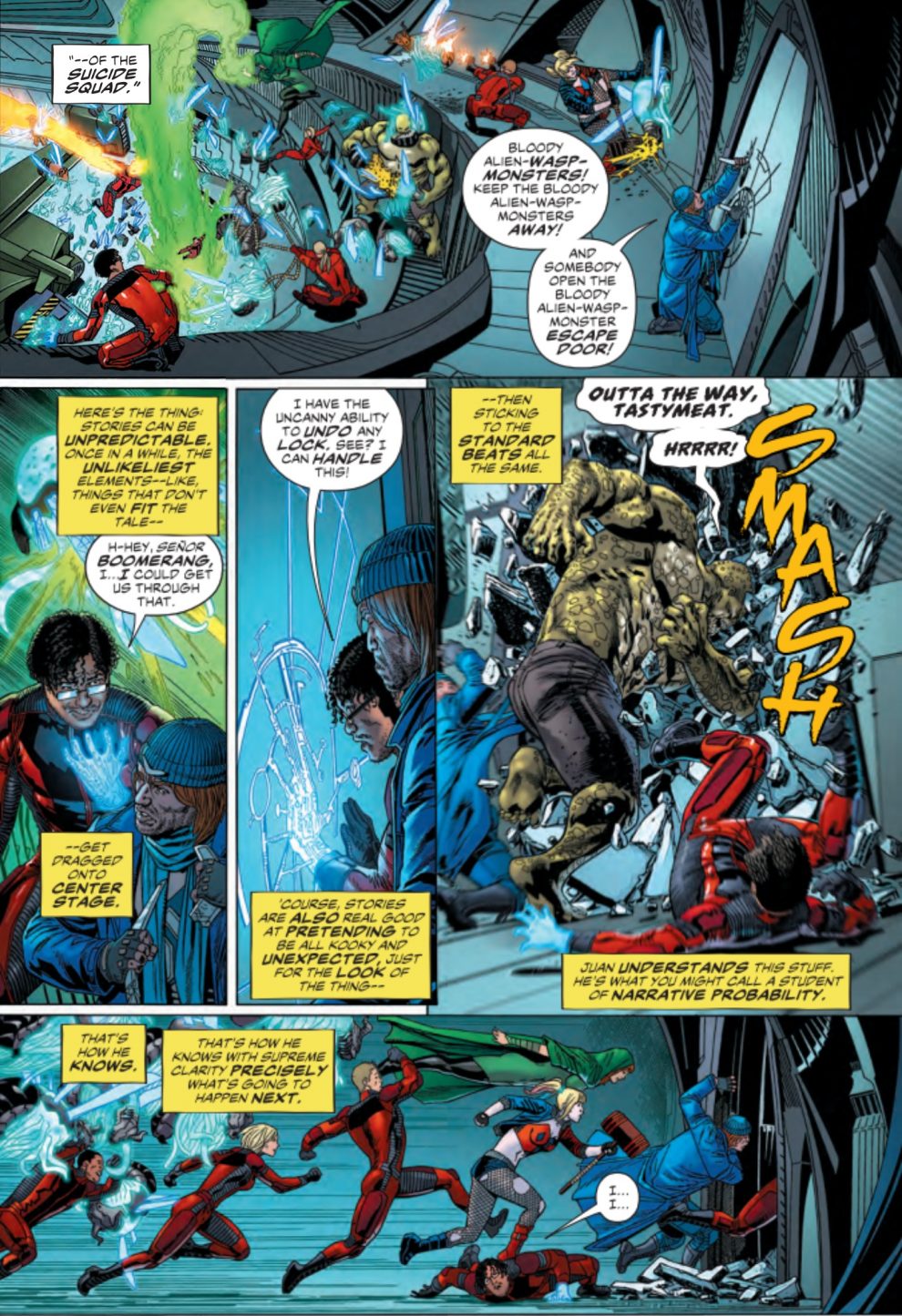 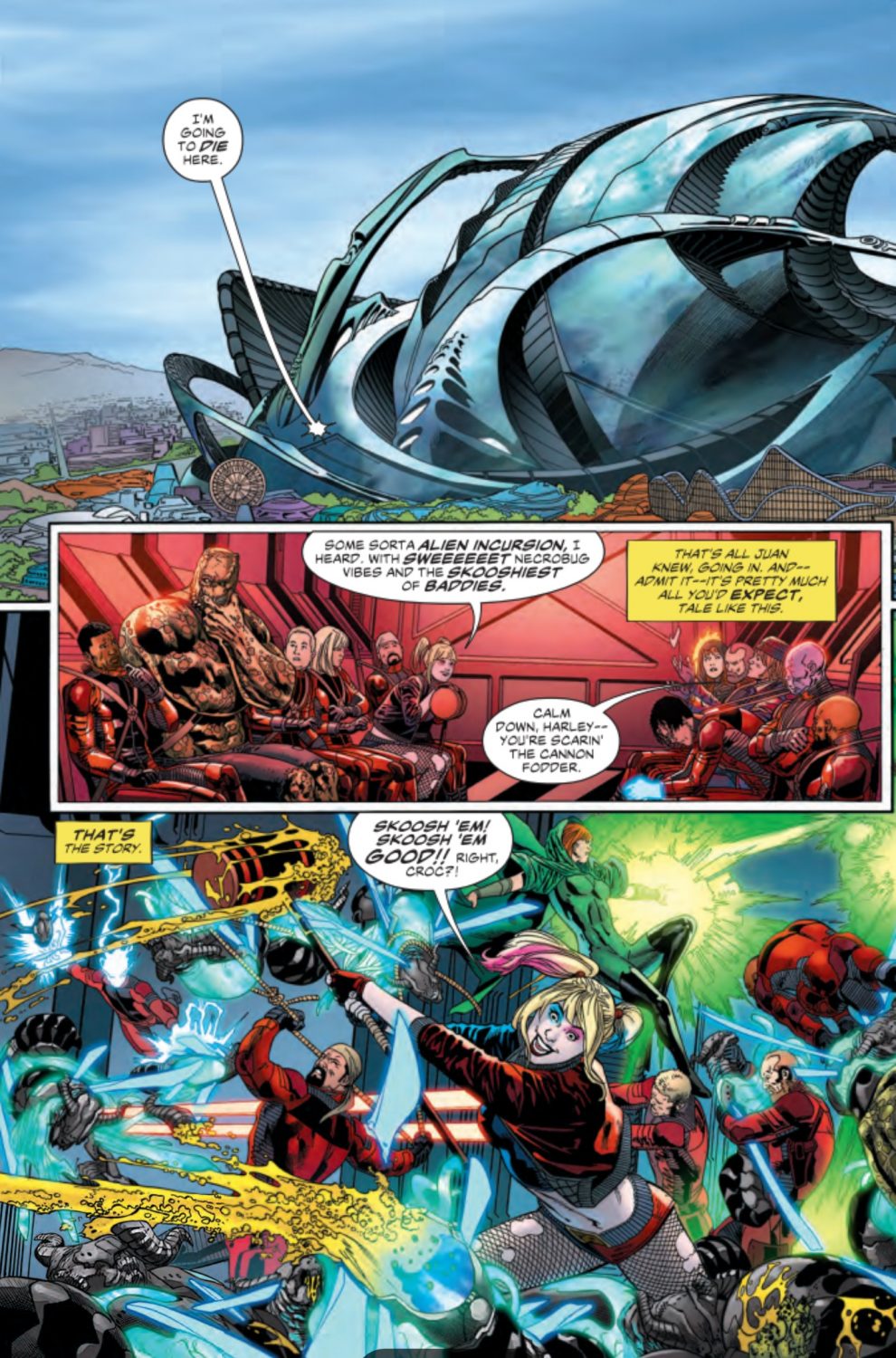 The issue is centred around Juan Soria, as he is thrust into the world of the Suicide Squad. We see the Squad fighting an alien wasp invasion with a group of volunteers, including Juan. The trials and tribulations start from the first page for Juan and the Squad, and they do not let up the entire issue. The fast paced action is written well and drawn brilliantly from start to finish.
It’s quite clear that this is supposed to be an origin story for Juan, however long he sticks around for. Spurrier gives the reader a two page short origin. Opposing to the normal issue long intro stories that we’re so used to.
Juan Soria himself is a very interesting character, one that seems to understand his place in the world and his position in the pecking order. Much like most, if not all, characters with powers; Juan’s current position in life has been dictated by a series of, mostly, unfortunate events. I for one am very interested to see where both this character and story arc goes.

Si Spurrier has sky-rocketed himself to a writer that I look forward to reading more of. I sincerely hope that Fernando Pasarin and Oclair Albert stay on this story as the artwork they have produced fits Spurrier’s writing perfectly.
This is a must read if you want a fresh new look at the narrative of a comic as opposed to the standard tropes that can be found in most other titles.