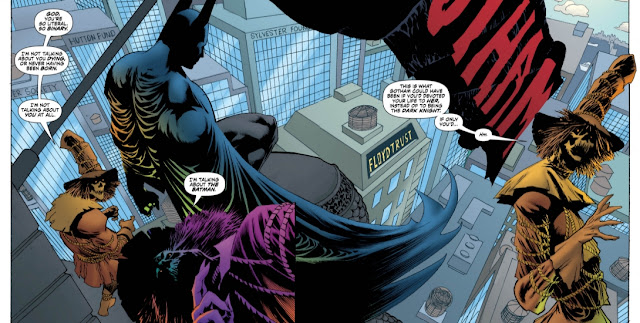 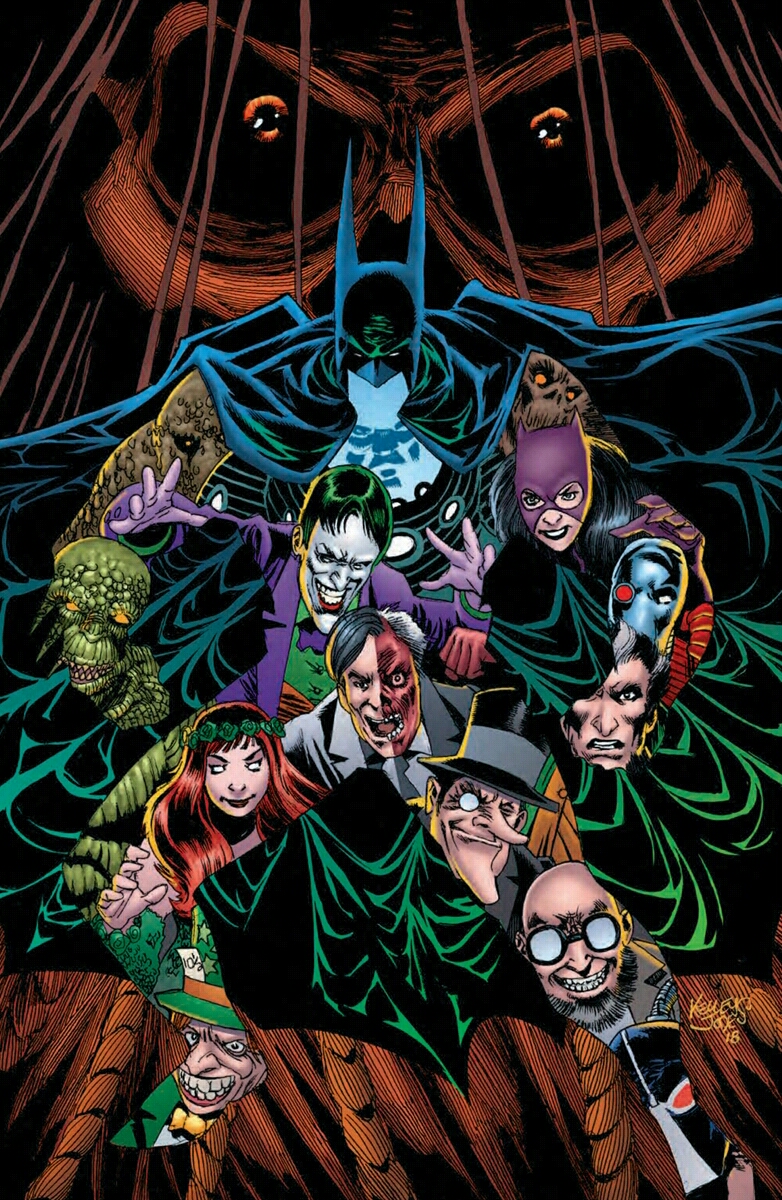 Have you ever wondered about your place in the world? Will your life have any lasting effect on people? Will you be remembered when you’re gone? Has your presence on this Earth affected the world in any way that’s meaningful? Most people live their lives trying to please themselves, or those closest to them. Batman isn’t most people. Over the course of the last couple of issues The Scarecrow has been trying to break Batman down in the scariest and most hurtful way possible.
The Dark Knight has given his life to helping others, but what if that was the wrong course of action? How has the world benefited from Batman’s struggle? Has he made a difference at all? What if all he’s done has just made things worse? What if Gotham City would have been a far better place if he’d never existed at all?
Wow. Deep stuff… and all from the glossy pages of a comic-book. Yet this issue isn’t just existential angst and philosophical debate, this is entertainment, this is art and this is 100% Batman.

Is Scarecrow The True King Of Fear?

Writer Scott Peterson and artist Kelley Jones are 90% through their epic tale of fear and terror. They have provided us with five issues of incredible emotion, nightmarish horror and true blue heroism. I have to say that this story could go down as the greatest Scarecrow tale of them all.
One of Batman’s most powerful character traits has always been his stoic self belief. His fight, however doomed to failure it may have sometimes seemed, was a fight for truth. His cause was just and his intentions noble. Having Crane make him doubt this, question his validity and his place in the world is the cruellest torture that the villain could possibly have inflicted. 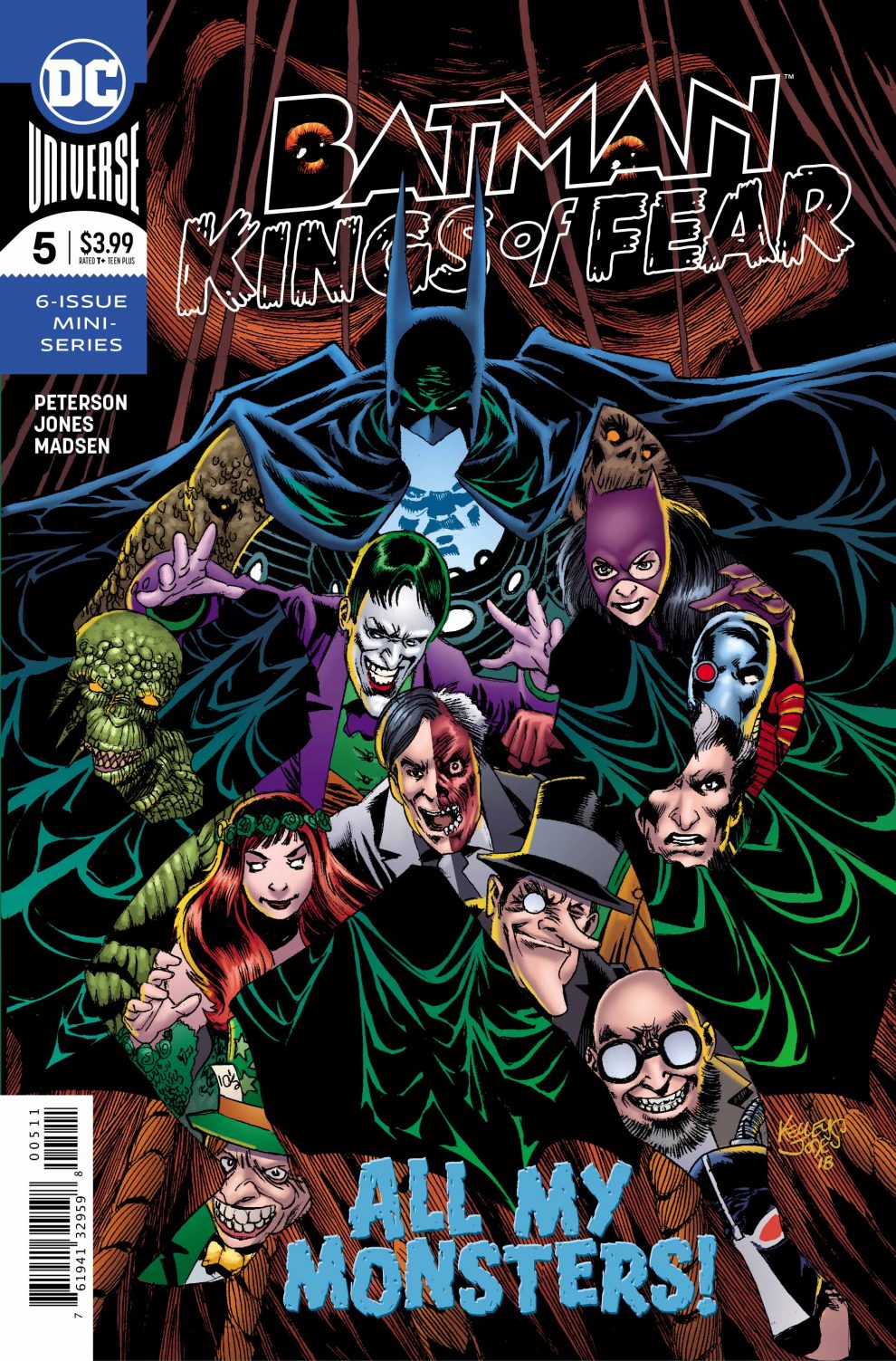 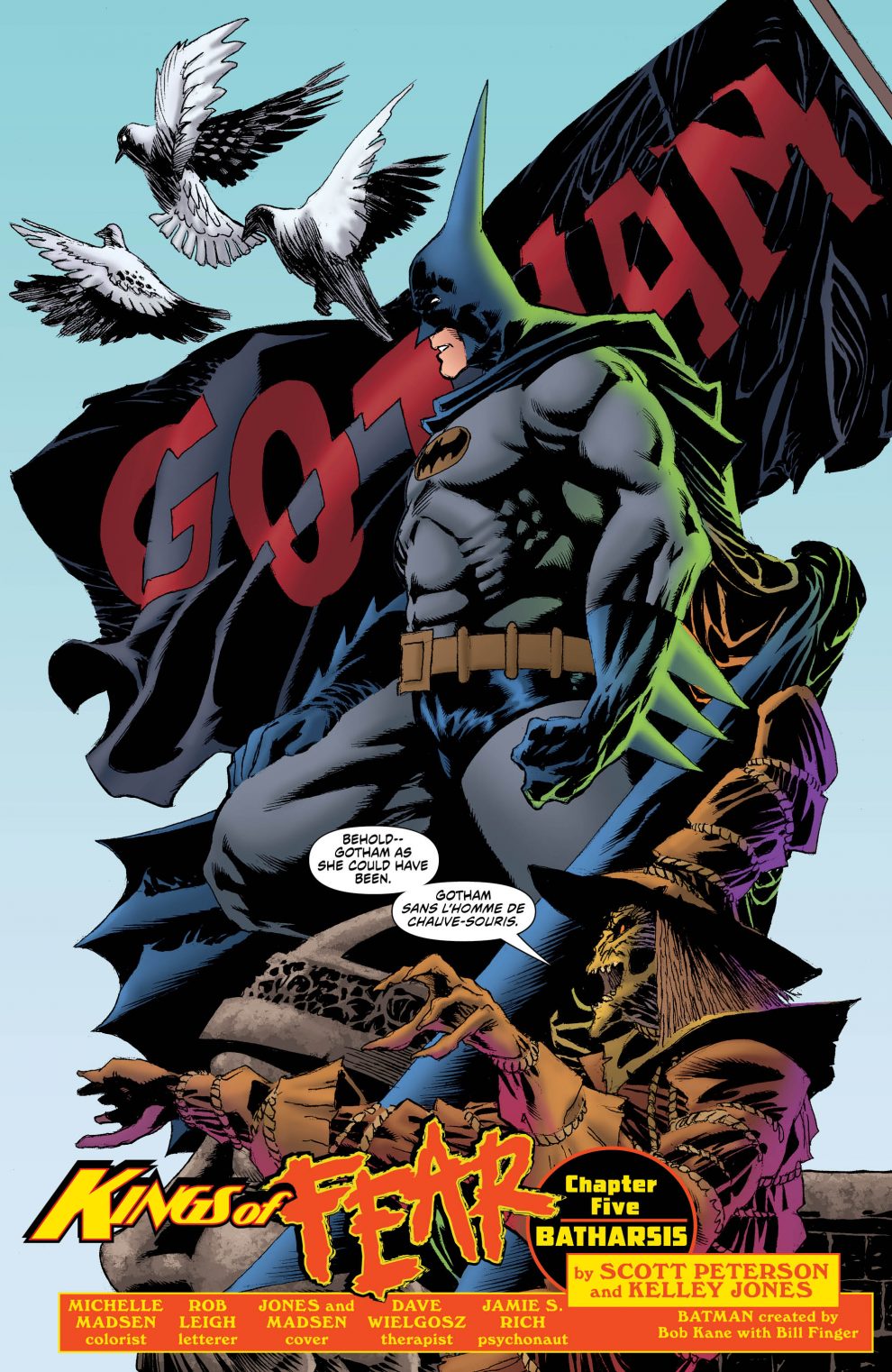 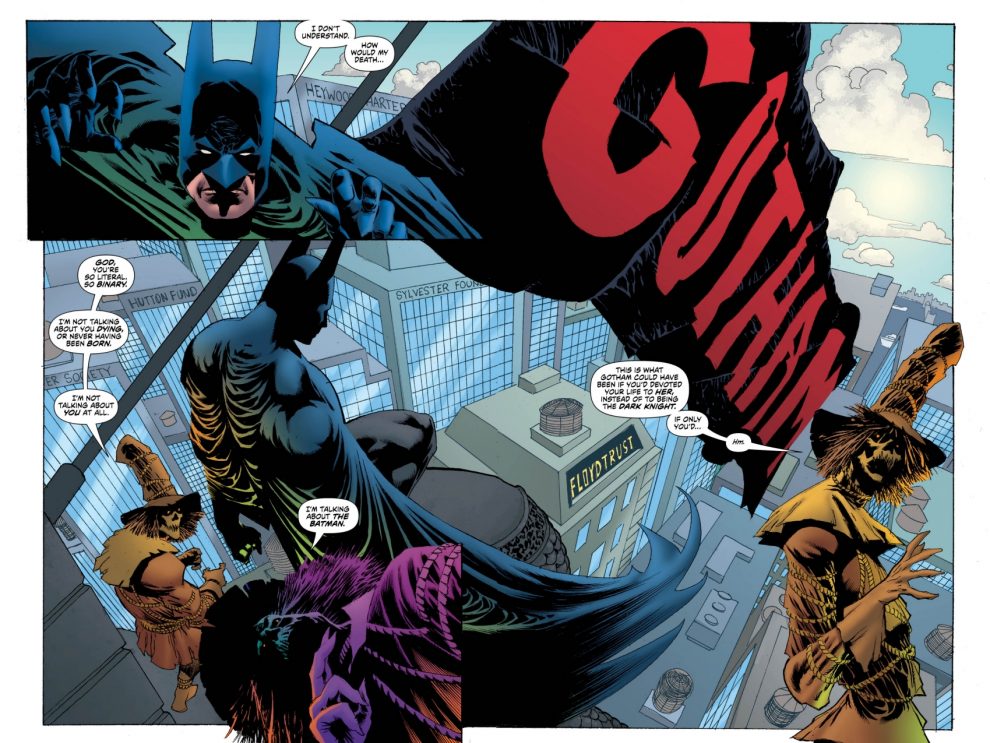 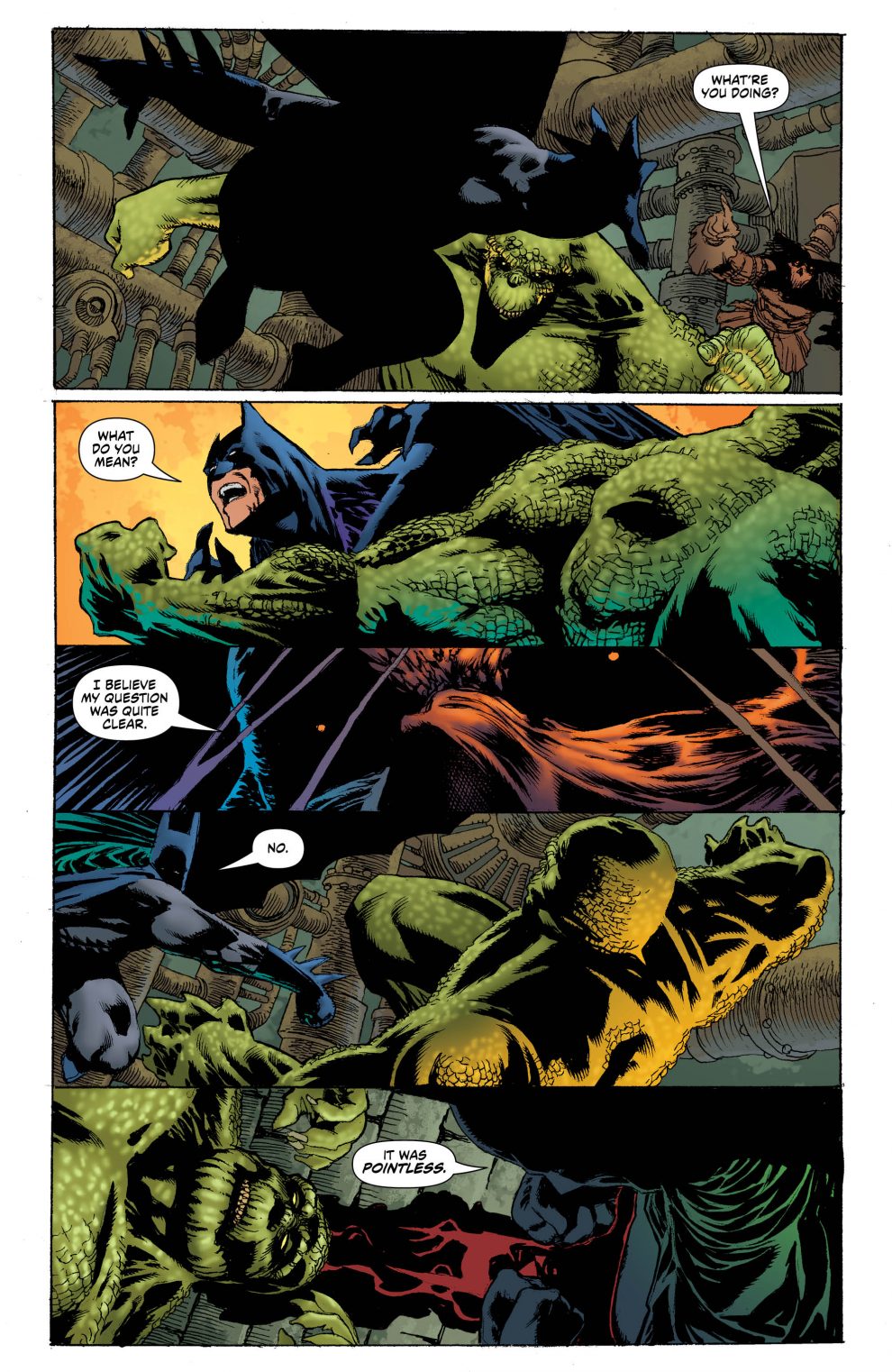 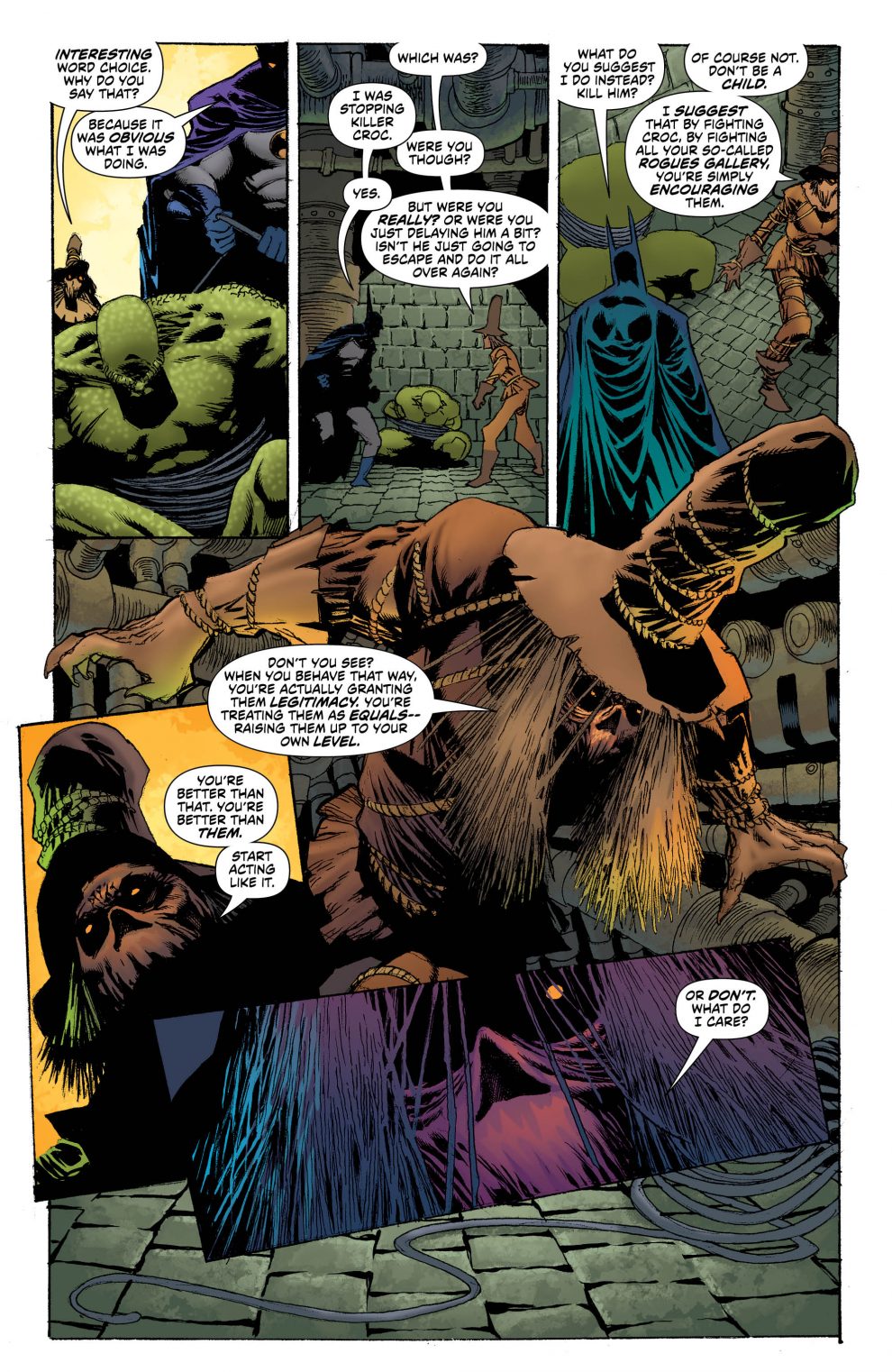 When everything is boiled down to its purest essence, isn’t everyone’s greatest fear the fear of failure? The sheer terror of everything we have ever said or done ultimately proving meaningless?
Kelley Jones is the perfect artist for this series as his style is both terrifying and uplifting. The nightmarish qualities of his figures and faces is both enhanced and tempered by the cartoonish, exaggerated designs he uses and the sheer skill with which he uses them. Pages 9 and 10 are perfect examples of this, but throughout this series he’s hardly put a foot wrong.
Michelle Madsen and Rob Leigh once again prove to be the perfect foils for both Peterson and Jones. The work of colorists and letterers is comics is often overlooked and undervalued. I can categorically state that this series could have suffered greatly under the hands of less talented individuals. This has been a beautiful and cohesive team effort from page one of issue #1.

Batman has been broken physically on numerous occasions, but rarely have we seen him as psychologically torn as he is in this story. Has The Scarecrow finally proven himself the true King Of Fear? Though we know heroes always win in the end, I truly feel that any victory Batman may yet glean will come at a cost. This series has been so well executed that I even fear he may not win at all. I eagerly, yet tentatively, look forward to the final chapter of this excellent series.