Devils of the Details: A Response to Teysa Karlov's Text Box 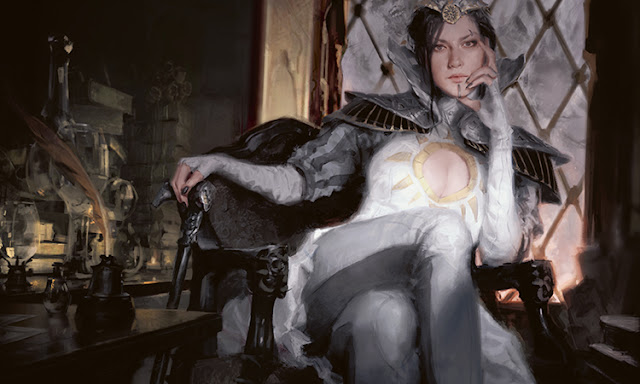 As Ravnica Allegiance spoilers have come through, I've been left puzzled by one such offering from Wizard's latest expansion. The rare Orzhov Legendary Creature, Teysa Karlov as seen below. You can find my original article discussing her and the other cards shown on the Third of January here. The short version, based on the minutia of the phrasing of her text box led me, and other players I trust implicitly, to make some assumptions. I was informed on Twitter by Rules Manager Matt Tabak that these judgments were wrong.

The short version of my assessment: she does not copy dies triggers. Apparently she does. Let's take a look at the card as we've seen it. 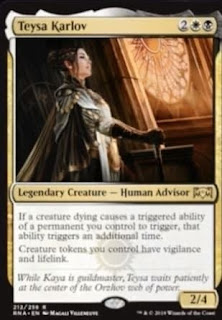 "If a creature dying causes a triggered ability of a permanent you control to trigger..."

It is no longer a permanent on the battlefield when the trigger is put on the stack.

What Teysa does work for is effects like Butcher of Malakir, or Midnight Reaper; stuff that says "whenever a creature dies..." as they're permanents on the battlefield watching things die, and making triggers out of the death.

As I see it, from a flavour standpoint that translates into the mechanics: Teysa watches something die, but its gone before she can intervene. I've been told this isn't the drill by Matt Tabak: 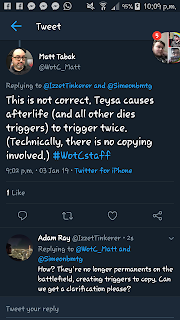 We get a very concise, brick wall of an answer. It just is. I do not see how the a card can copy a triggered ability of a permanent, when the permanent ceasing to be a permanent makes the trigger.

Don't get me wrong, I am using this excuse to sound off on how the fine wording on a Magic card doesn't quite follow. When the card was first revealed, friends and I were ecstatic to read it. Our first instinct was to read it the way Design and Development had intended it. The strict wording made us feel as though it doesn't work that way.

I am very happy to see that it works this way. The Black/White tokens deck has received an engine akin to Anointed Procession. Hunted Witness, Doomed Dissenter, Martyr of Dusk, and Elenda all get much better spitting out double the number of guys under Teysa's supervision.

The wording on Magic cards are more tight and linguistically rigid than in natural English. What had started with me evaluating a Magic card as much more narrow, due to the wording, is actually much more versatile and powerful than anyone had first thought.

It's hard to own up to your mistakes, and though I admit, certain parts of the card do baffle me still, I can look past the confusion and take her at face value. She's a powerful engine that'll define many decks to come.
Adam B Ray Adam B. ray Adam Ray Adam's Dragon Cave Magic Magic: The Gathering Ravnica Wizards of the Coast