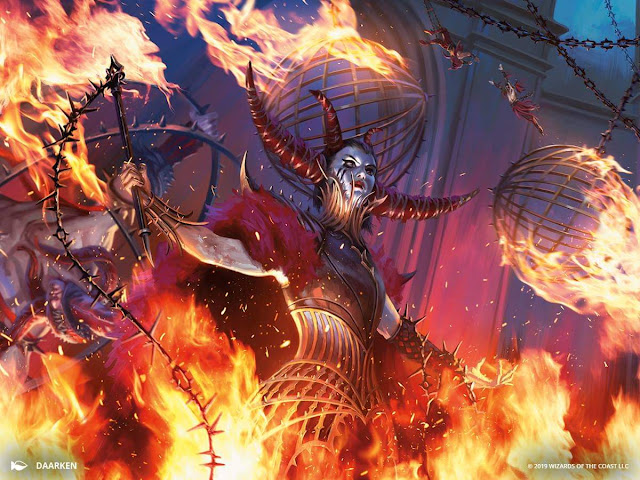 We're trucking along with Ravnica Allegiance Spoilers. We've seen the first glimpses of one cycle and almost the complete look at another. 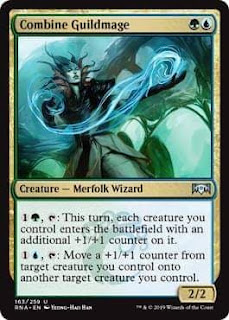 Finally the guildmages can convene. In dedicated counters decks, such as Atraxa or Vorel, Zameck Guildmage is still probably a stronger card. The blanket counters is strong for the Green ability in those counters decks, like Zameck does, as a redundant effect, or second counter. The Blue ability would be a great combat trick in Limited, or an enabler of effects like Fathom Mage or a new card later in this article. 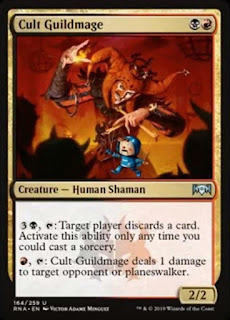 Simple and efficient. Most guildmages dominate Limited and this one is no different. Repeatable discard over one or two turns will turn that game of Limited into an attrition grind. The one mana Spectacle enabler will do very well in many Rakdos Limited decks. 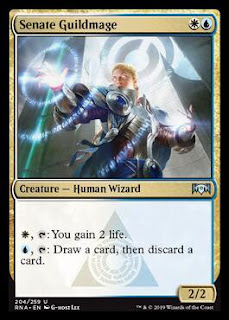 I like this one in that its abilities are the overall cheapest. You can get many activations of this guildmage over a game. It'll stem the bleeding in a limited game against a Rakdos deck, and move you through your deck, which is game winning in Limited. Interesting that it has the most efficient costs out of all the other Guildmages. The Azorius are stuffy bureaucrats no longer. 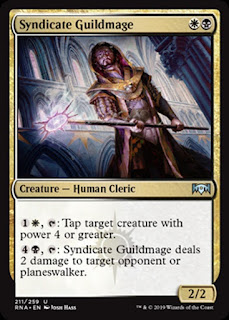 The design space of this guildmage is from a design space of a scaled down Legion Guildmage. Both are tappers, but this one is limited to tapping only the big power threats. Both do direct damage, but this one can hit Planeswalkers, but the Boros are heavier hitters. An interesting, simple design which would do work in Limited. 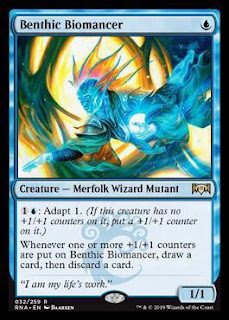 Now this has a lot of play to it. An aggressive one mana creature that can grow reliably has practical applications in Merfolk or Mono Blue Tempo in Standard. Moving the counters around thanks to Combine Guildmage gives you multiple loot triggers. This might be a creature worth putting counters on thanks to Hadana's Climb or the new Essence Capture. 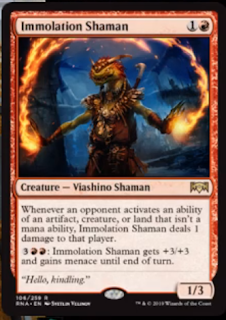 This design seems familiar. The Harsh Mentor was welcome sideboard card in certain Red decks, but not a great number. The lessened damage is a point off of its favour, but the on board pump makes it a great deal more formidable in combat. It'll be as welcome as Harsh Mentor was by Red burn Commander decks like Neheb and Zo-zu. 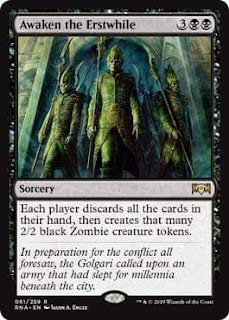 Sure, the mana cost taxes this out of Standard play. In dedicated Zombie decks, particularly ones that run Shepherd of Rot. It's a welcome card in punishing zombie commander decks, and mass discard like Nath 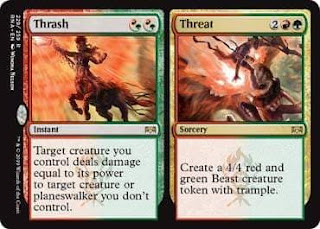 The first of the rare split cards. The art is keeping the convention of the guild key member and the guild master making the artwork. As for its playability, an Instant speed punch spell that can also hit Planeswalkers is immediately playable in Gruul Monsters decks.When behind, the Threat half does make a body on board. Very versatile. 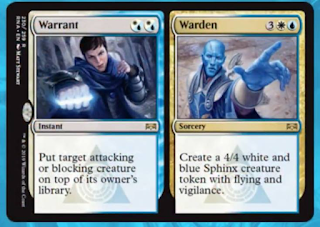 The Azorius split card has play in a great deal of spaces. Warrant is tempo removal that's welcome in lots of Blue/White/X decks. I can see it being a thing to fear alongside a Seal Away and Expansion when Teferi enters. Warden is essentially Serra Angel, and a welcome but not powerful effect. 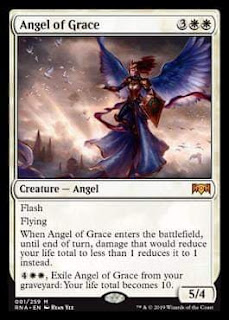 Well this is fun. This is the second angel in two years that saves you from the brink, the other being Exquisite Archangel. It's a fun card for various angels decks in the Commander format. 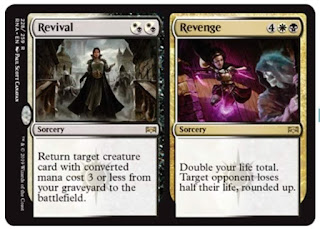 Now this is a spicy card. Revenge is a one shot kill when paired with Sanguine Bond. Revival is two mana to reanimate three mana worth of creature. Lots of play to this card. 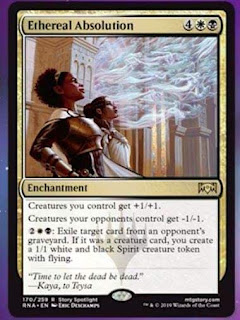 The power couple that Magic deserves, now in charge of the Orzhov. They seem to have released all the indebted ghosts under the Orzhov control. In all seriousness, a Commander tokens deck would love an anthem that weakens the opposition, and farms the enemy graveyard to make evasive tokens. This card will see a lot of play.

Powerful Commander cards have been shown today, with a few short days to go before the end of spoiler season in a few short days.
Adam B Ray Adam B. ray Adam Ray Adam's Dragon Cave Magic Magic: The Gathering Ravnica Wizards of the Coast