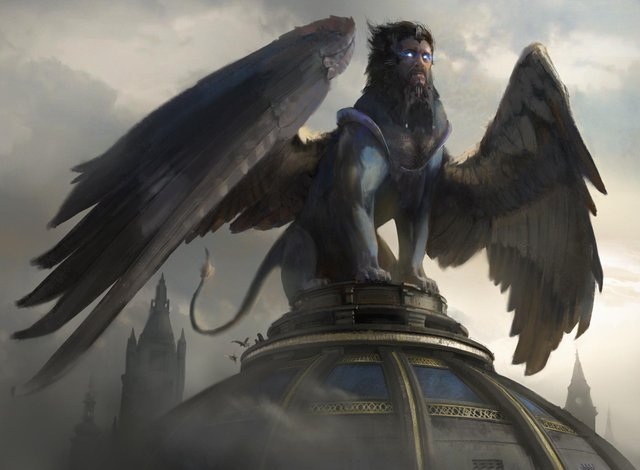 Do forgive me, ladies and gentlemen. Wizards has revealed (too?) many Spoilers over Thursday and Friday, and one card was able to make our attention on Saturday. I can't cover all of the spoilers I've missed since the great Teysa incident, but I'll do my best do cover cards from the end of Thursday the 3rd to Saturday the 5th.

I'm only talking here about cards for one or more non-Limited formats. A lot of these cards will be old news for you all. They're still worth the discussion.

The titles of Jane Austen's latest collection. So far we've not seen any of the Rare split cards, but the Uncommons have all seemed quite playable. Carnival is a welcome one mana Spectacle enabler, and Carnage is a slightly pricier Blightning. Cremate was a fine Sideboard card and will continue to be so, but Consume actively kills Carnage Tyrant, putting it into consideration in Standard Esper Control.

Depose is a very welcome Limited combat trick on the Azorius split card. Deploy however, may have quite a bit of play to it, by virtue of it being an Instant alone. Two flying bodies, and two life at Instant speed is certainly a turn around for Limited, but new Dovin Baan would certainly appreciate a boardstate and a cushion against how aggressive the new format looks to be. I think the shell for a Bant Tokens deck with this, History of Benalia, and March of the Multitudes, with Dovin Grand Arbiter as a draw engine is coming very soon to Standard, which plays this to help recoup bodies on board alongside the removal at 4 mana like Conclave Tribunal. 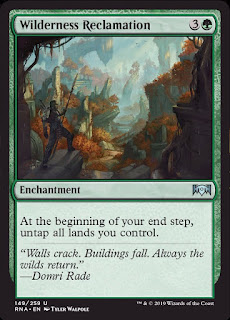 Ah, Schrodinger's enchantment. This card exists in a weird dual state for me. It's either the most busted enabler for Turbo Fog, other than maybe Emergency Powers. Or, it'll do absolutely nothing in Standard, but turbocharge a billion Green/X Commander decks. In multiples, it's good but anaemic, and at 4 mana, the Turbo Fog deck would like to be able to turn the corner, not play a relatively do nothing enchantment. Sure if you have the Settle the Wreckage at the same time, then you've successfully survived a Rakdos attack step, but at the cost of slots in your deck. Turbo Fog was a fine tier 2 deck without this card. I can see it being tried, but unsure if it'll do anything away from Hundred Card decks. 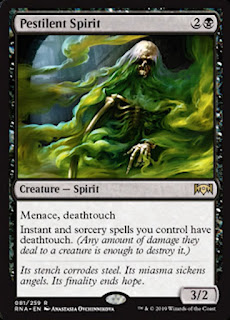 So that's funny. Despite the relatively squishy two toughness, it will always be a two-for-one in combat as menace and deathtouch will take two creatures down with it. Giving innocuous burn spells like Shock and Shivan Fire deathtouch, and the fact that this isn't legendary may just put either a Black/Red Burn, or Rakdos Control deck together. 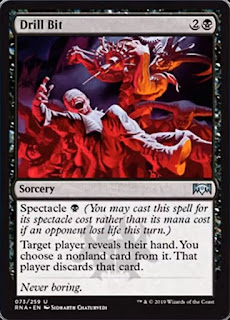 Yet another piece for the Rakdos Control deck, alongside Carnival//Carnage, Pestilent Spirit, and previously spoiled Swiss Army kill spell Bedevil. If a deck can consistently enable Spectacle, this is a Thoughtseize, which puts the premium on Red damage dealing one drops like Shock and Fanatical Firebrand through the roof. Couple that with other consistent discard spells like Vicious Rumors; removal like Cast Down, Moment of Craving, and Vraska's Contempt, then have Angrath as a top end, that's the shell of a Red/Black Control deck even I can't help but be interested in. 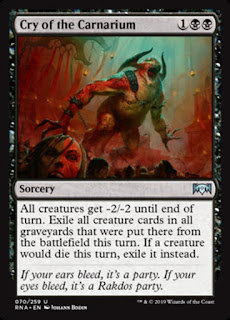 Yet another piece for the Rakdos Control deck. In all seriousness, all Black/X control decks play this, as the exile clauses on resolving this and for the rest of the turn makes this incredibly relevant against Golgari in Standard - which still looks to be the default shell for Standard Midrange. The continual exile is more valuable to the decks that want it, than the one-sidedness, making it much stronger than Golden Demise. 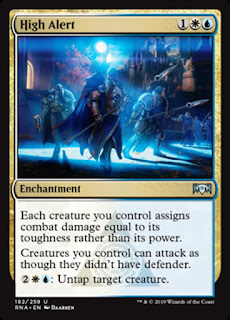 Now a piece for a very different deck. This may be copies 5-8 of Arcades that Bant Walls sorely needed. Especially since you can neither Bedevil nor Contempt an Enchantment. At 3 mana, it doesn't clash with the 4 mana payoffs like Arcades or Golden Guardian. Nor does it clash with the 2 mana bulk of the deck, like Wall of Mist or Gleaming Barrier. It letting all your creatures damage with their toughness is particularly good with Druid of the Cowl, a dork the deck traditionally plays. While I don't expect it to dominate the Pro Tour, I do think it's a considerable deck to cook up for Arena. 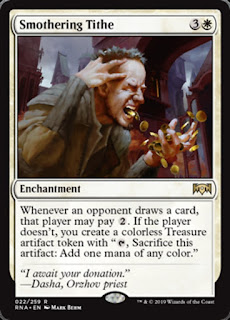 Speaking of White Enchantments that'll do silly things on a Commander table. The lovingly nicknamed "rhystic money" is the tax and ramp that a lot of White decks will be very eager to get. Four mana is a lot for a tax piece, but in dedicated Mono White with Land Tax or Weathered Wayfarer starts, this can come down and pick pockets very quickly. On top of that, it making Treasure Tokens is so relevant for Artifact decks like Sram and Jor Kadeen, adding up to Metalcraft and Affinity very quickly. Mark Rosewater himself said that Treasure tokens are going to be sticking around for a while, to represent gold doubloons and other muns of various planes. I'm very excited to see what Zibs and Zinos look like. 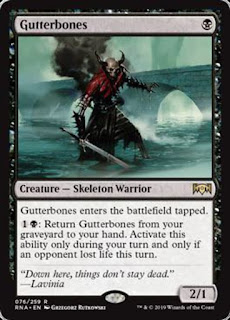 Skelly over here might yet be the second coming of Dread Wanderer or Scrapheap Scrounger. Sure, his trigger might be the hardest to enable, but a recursive, above rate, aggressive Black creature will see play in many an aggro deck. I do believe now we have the pieces for a very aggressive Mono Black deck. Even still, we may yet have the pieces for a Mono Black Undead Aggro deck. Death Baron is an amazing lord in multiples, and Liliana is a powerful engine on the top end alongside Midnight Reaper as a refiller. Worth keeping an eye on at your first FNM. 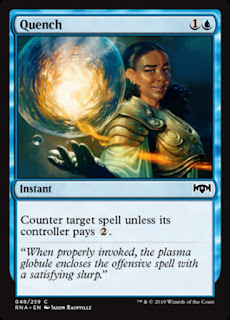 And the award for my favourite Common goes to! Sure, it's not Mana Leak but as an early game Counterspell it's more versatile than Essence Scatter. It will see play alongside Sinister Sabotage in the heavy permission decks. 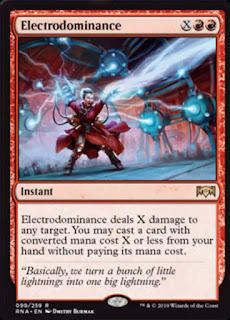 Delicious. Obviously Banefire and Explosion take up the top spot of big X spells for Standard play. This is a Commander burn spell in big mana decks like Rosheen or spellslinger decks like Mizzix. 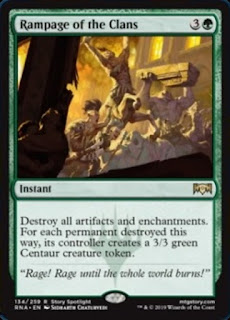 The story implications on this Spotlight card shows just how incensed the Gruul are under Domri's reign. They'll destroy anything. As for the playability at a Commander table, this is the artifact and enchantment sweeper strong enough to make it into 3 or 4 colour decks. Hitting everything this efficiently puts it up there as a sweeper of the quality of Bane of Progress. It might be just a little too expensive for Modern play to deal with KCI or Affinity decks, plus the Centaur tokens are much more relevant in Modern than Commander, and in Modern, cards like Creeping Corrosion already serve as an artifact wrath in big Green sideboards. 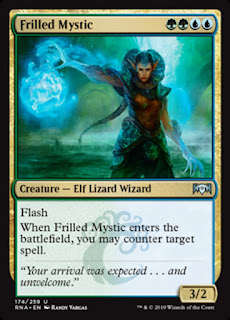 At last the Lizard Wizard has flashed onto the battlefield. The playability on this card is quite strong. Being harder to cast but having a higher power than Mystic Snake is already a good company to be considered in. Certain big mana Bant decks may play her as a flash blocker or a living Counterspell. Her playability in Commander is very high, especially in a flicker deck like Roon. 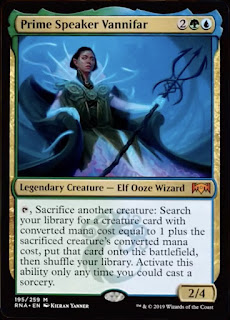 The new leader of the Simic Combine seems to be hatching all manner of creatures out of a birthing pod. Having the same ability as a banned combo tutor engine makes you a very powerful card by reputation. Being limited to two colours in Commander is a small constraint, but there are ways to abuse repeatable tutoring for miss Elf Ooze over here. Slap some Boots on her and activate an Intruder Alarm and you can bore your commander table by searching forever.

Wizards has revealed a lot of cards in their first week. We can expect to see the full set revealed before the next FNM. We're still yet to see the new version of Domri Rade, the Guildmage cycle, the Rare split cards, the Gruul uncommon split card, the White Blue and Green Mythic rares, the Rakdos Mythic (not to be confused with new Rakdos) and many Commons and Uncommons. There's much to look forward to going into next week of spoiler commentary.

You can find it all right here on Fantastic Universes.
Adam B Ray Adam B. ray Adam Ray Adam's Dragon Cave Magic Magic: The Gathering Ravnica Wizards of the Coast