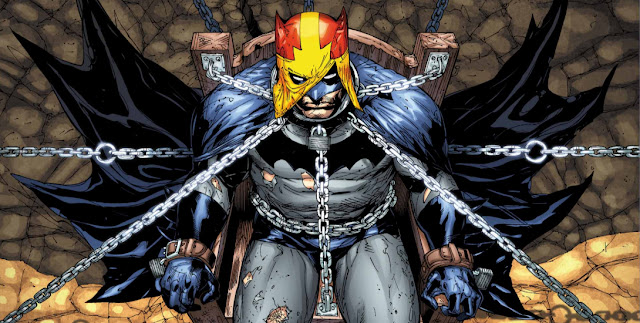 “Mythology: Waiting For A Miracle” 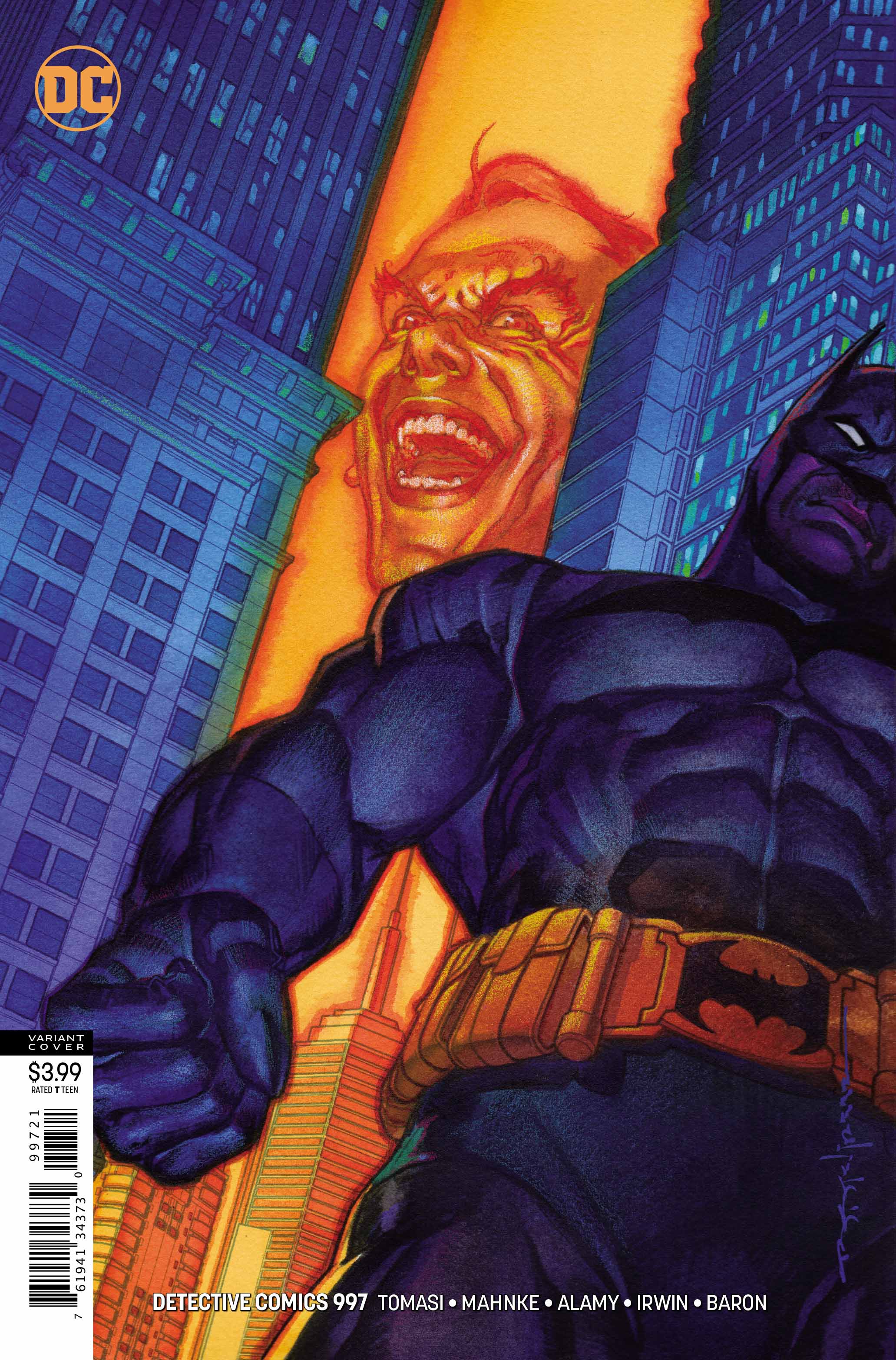 Writer: Peter J. Tomasi
Artists: Doug Mahnke, Christian Alamy & Mark Irwin
Color Artist: David Baron
Letterer: Rob Leigh
Review by Steve J. Ray
Just when I thought that this series couldn’t give us any more surprises, at the end of the last issue, Peter J. Tomasi dusted the cobwebs off yet another vintage DC character. Yes folks, Thaddeus Brown – the original Mister Miracle – is back! You read that correctly; Thaddeus was DC’s first “World’s Greatest Escape Artist” before Scott Free or Shilo Norman. Brown was the man who trained Scott upon his arrival on Earth, and he trained a certain Dark Knight in the art of escapology too.
In Detective Comics #996 Bruce discovered that his mystery assailant wasn’t just attacking his loved ones, but everyone who had a hand in making The Batman who he is. Leslie Thompkins comforted the newly orphaned Bruce Wayne as a child, nurtured and counselled him. Alfred raised Bruce and was key to instilling the Caped Crusader’s strong moral code. Leslie was murdered because of this, and Alfred now lies in the Batcave in critical condition.
The latest issue opens with Batman and Thaddeus in a death trap that is reminiscent of the vintage comics of yesteryear, and the legendary 1960s TV Batman too. The bad news is that Batman seems to be completely out of shark-repellent Bat-Spray! 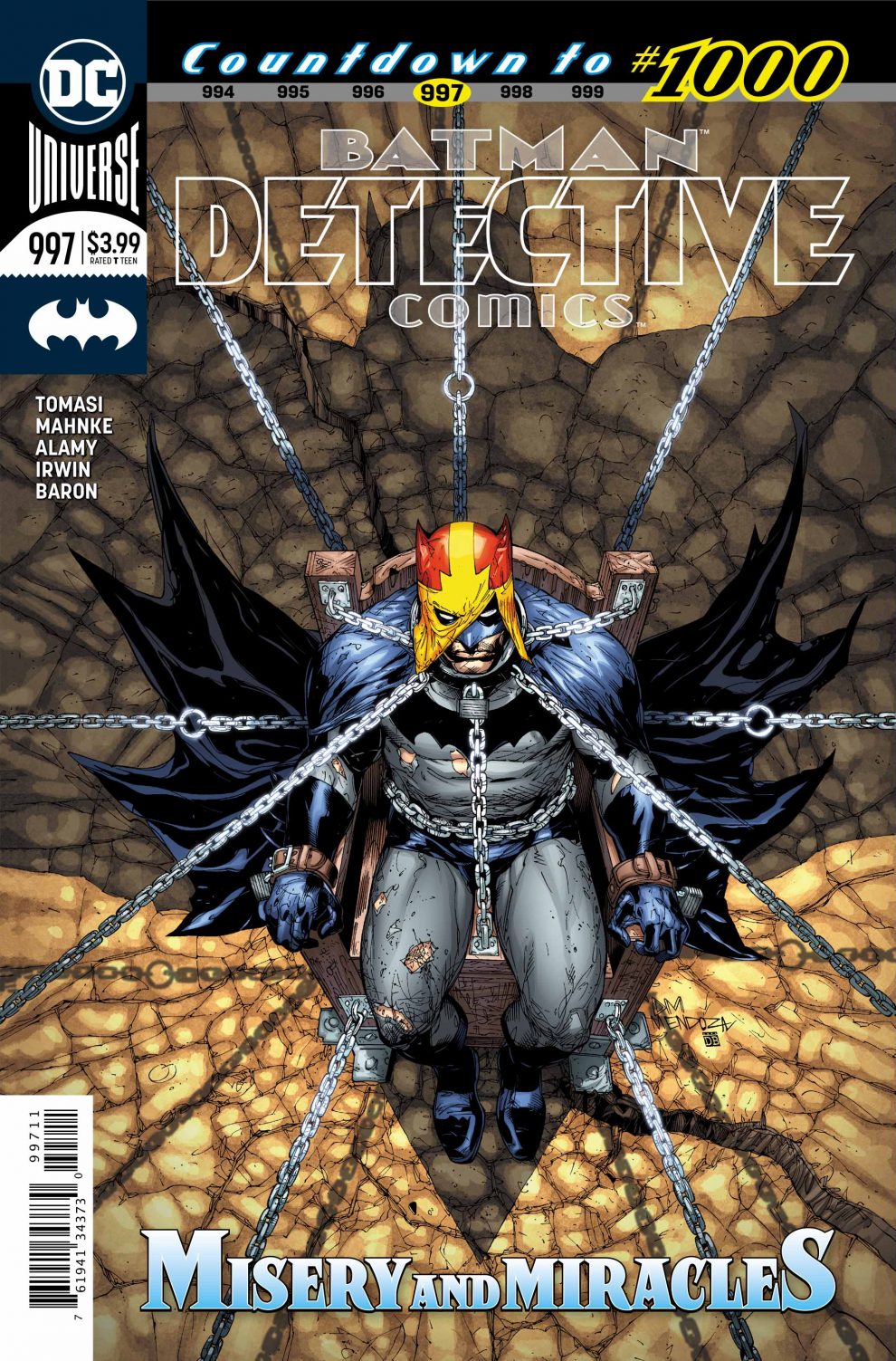 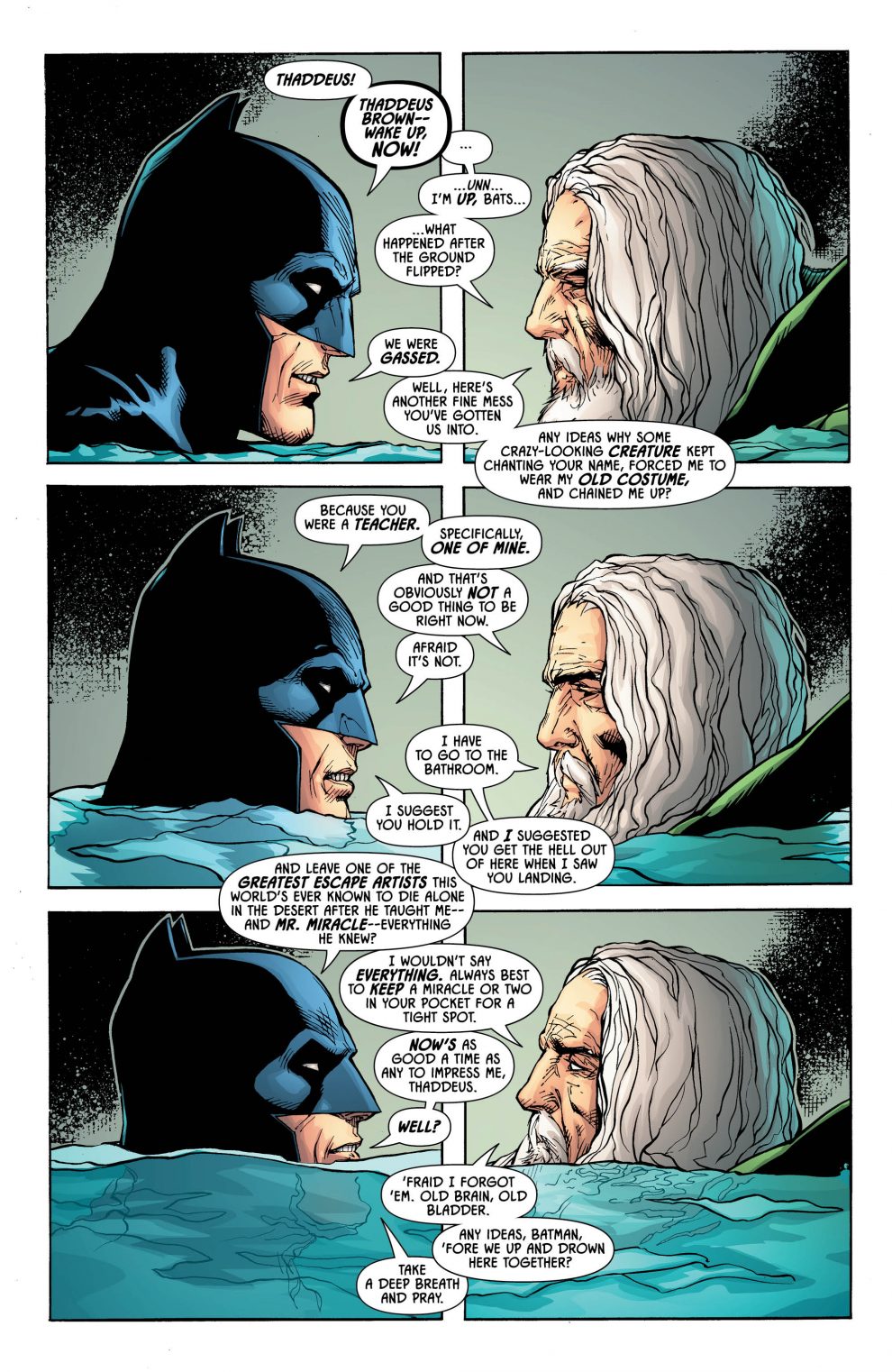 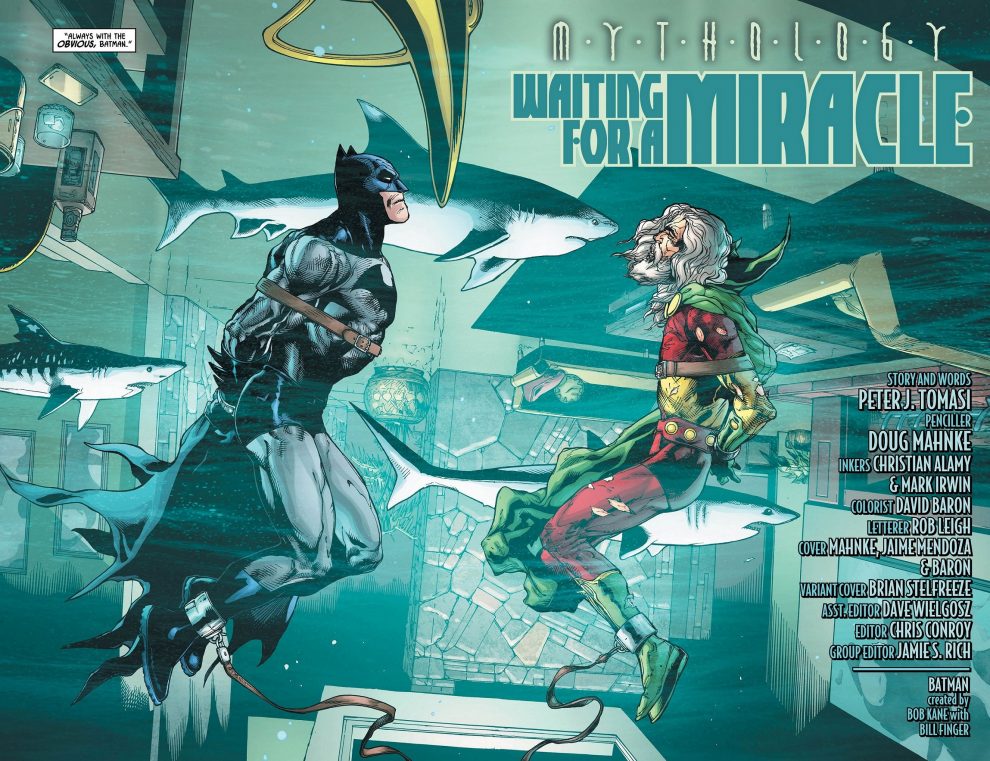 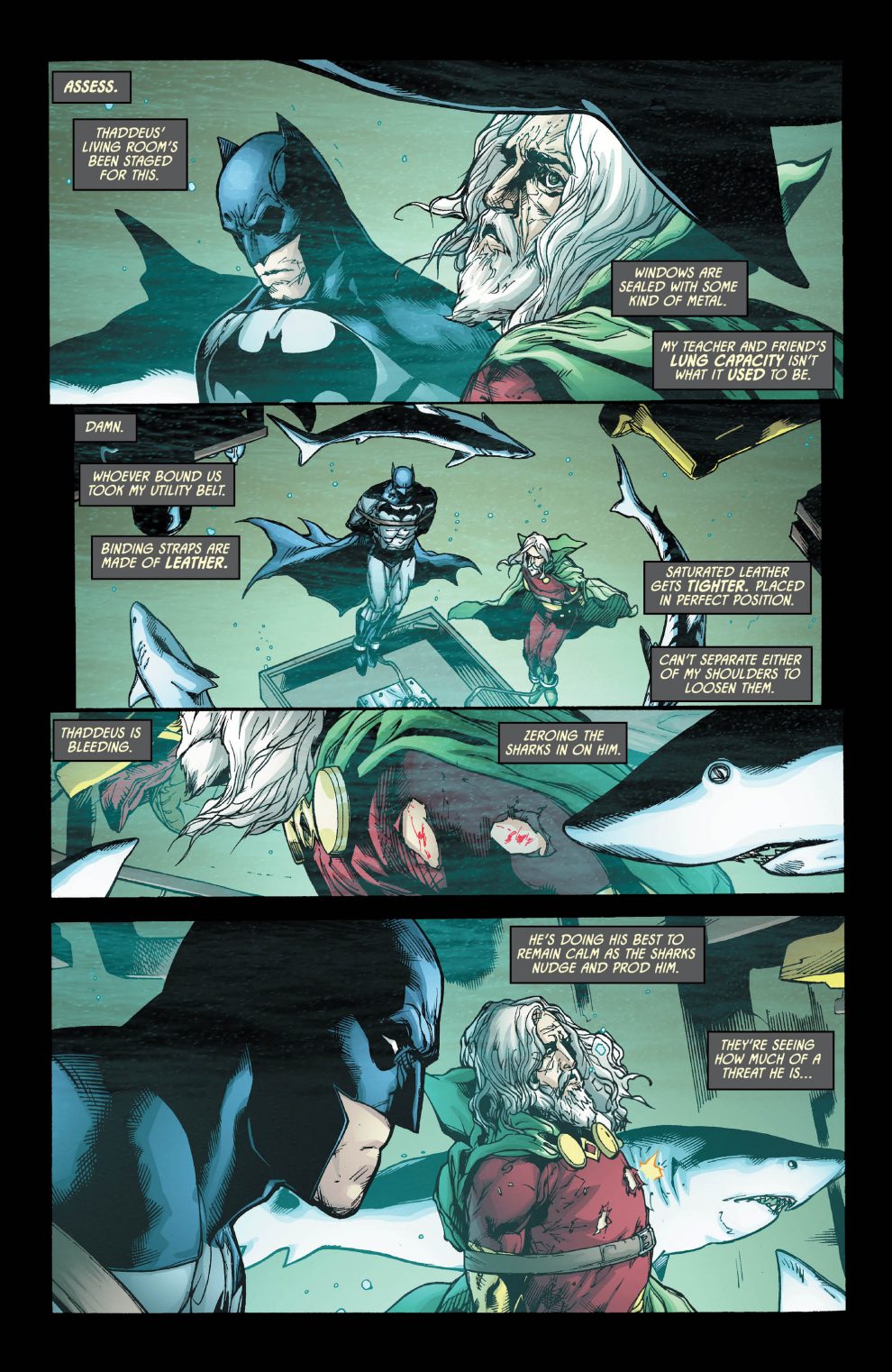 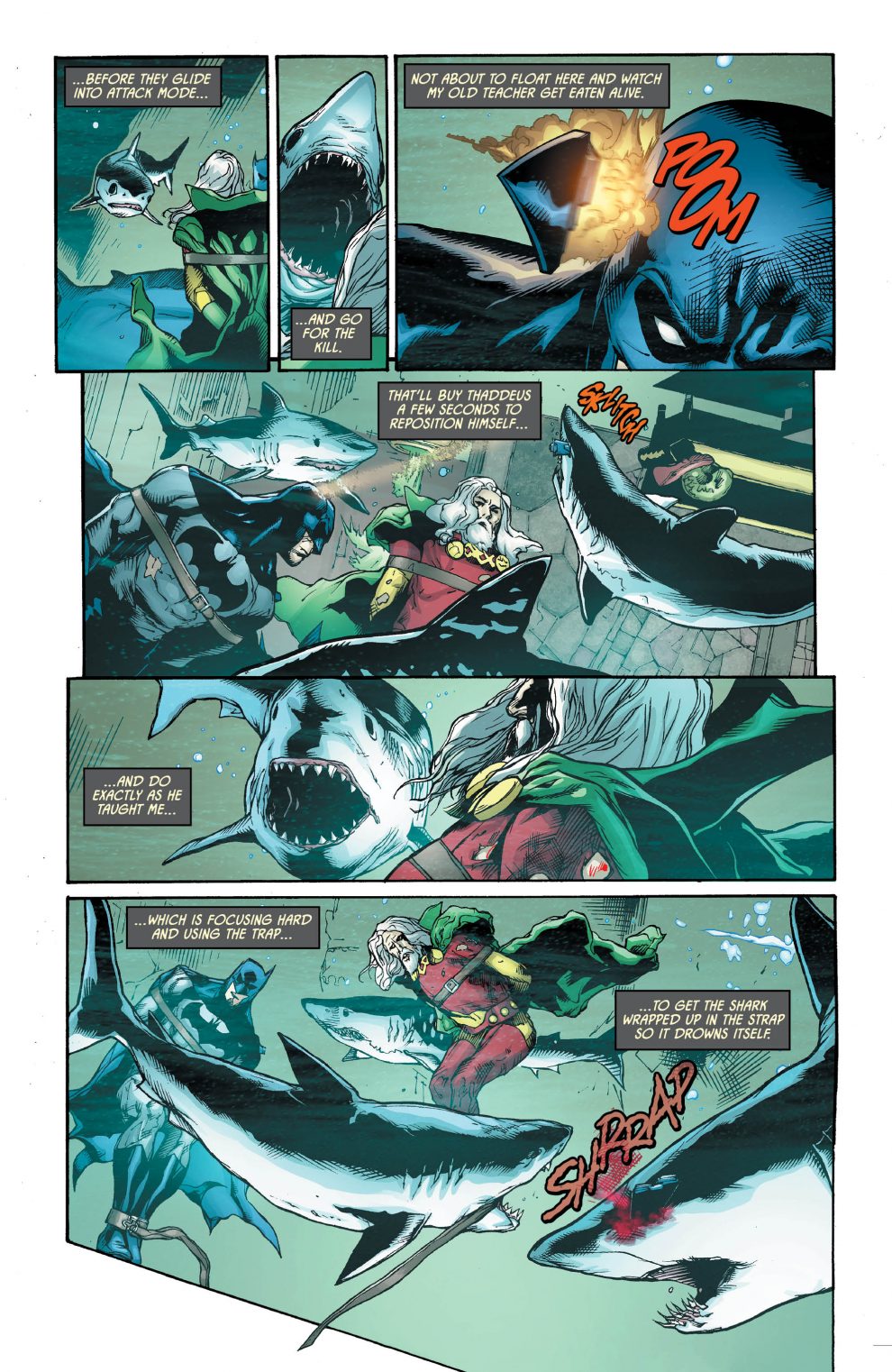 It’s not just Peter J. Tomasi who is on top form right now, as Doug Mahnke is also delivering some sterling work. I’ve always loved Doug’s Batman, since way back in “Under The Hood.” Mahnke was the artist who officially brought Jason Todd back into comics starting in Batman #635 (December 2004). I was very pleased when he was announced as penciller for the run leading up to the land mark 1000th issue of Detective Comics. This chapter highlights his talents admirably. Doug draws a classic, brooding Batman, but he and Tomasi do something with Batman’s cowl in this issue that I’ve never seen before! I’m not going to spoil it, but let’s just say that on page five one shark gets the point… quite literally.
We have two inkers on this issue, both of whom perform brilliantly. Doug Mahnke has a distinctive style, and both Christian Alamy and Mark Irwin showcase their own talents, without drowning (pun intended) Mr. Mahnke’s.
Color artist David Baron is bloody brilliant, as pages 6-8 will attest. What’s amazing about his work is his versatility. Mr. Baron is also colorist on The Batman Who Laughs. Look at his work there and compare it to his coloring on Detective. His choices of style, palette and tone are completely different on each book. You would never guess that both titles were colored by the same man. This guy’s an artist, no question.
Rob Leigh, I salute you. Here’s another talent who is working his bat-butt off. Rob is working on three titles that I review, and I know that he letters at least another couple, as I edit all the reviews on this website. Not only is he prolific, he’s extremely talented. When you buy this issue, check out page 11. His sound effects are beautifully placed within the art, and his use of sold lettering mixed with translucent sound-effects is really creative and eye catching.

I’ve stuck with this series for over 32 years, and stories like “Mythology” are the reason why. Batman, Henri Ducard, Mister Miracle, Leslie Thompkins. Murder, mayhem, mystery and The World’s Greatest Detective finally living up to his billing. There are only two issues left until the long awaited Detective Comics #1000, and if they’re all as good as this one, I can’t wait to read them!