We Have Ascended: KeyForge – Age of Ascension Spoilers

Many critics, and by that I've mean me, have one big point to talk about when it comes to KeyForge's future: how will it handle the newest expansion of cards? They need to be able to stick the landing – not making cards too strong compared to their first set, Call of the Archons. They needed to also create enough of a new impression to let the game evolve and expand. Richard Garfield is no stranger of making strong second sets, and Age of Ascension looks to follow Call of the Archons. We've seen a few of the new set's cards, and heard about some favourite cards making cameos in the new decks. 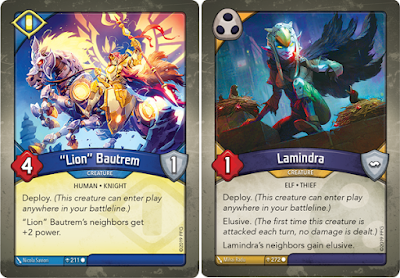 Now appearing on certain creature cards is 'Deploy'. Not needing to enter on a flank, Deploy creatures enter anywhere – letting you scoot a space between creatures for them to enter. The mascots for the mechanic really show off the design space. "Lion" Bautrem giving a power boost is fitting for an inspiring commander from the Sanctum, while Lamindra shows her neighbors the tricks to staying safe on the Battle Line. I imagine there'll be a large Taunt creature with Deploy (probably from Brobnar or Sanctum), a Deploy creature that grants Skirmish (probably from Shadows, Untamed, or even Logos), and another Sanctum Deploy card granting an armor bonus like Bulwark. 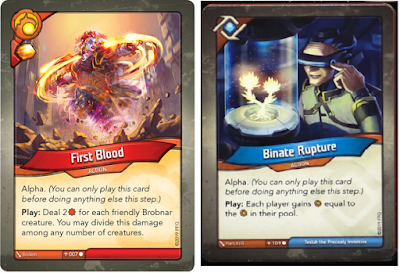 First Blood would be bonkers if it didn't have Alpha, as it doesn't care if the Brobnar creatures are ready. Going ham on a Brobnar turn means you can play out your hand, use your angry giants, then deal damage with a better Mothership Support. Doubling everyone's æmber seems bad with Binate Rupture (especially if you can't play it after gaining a lot with your Logos turn) but twice as many is still a strict increase. There are effects like Neuro Syphon and Dextre to keep your opponent hemmed in on this gain. 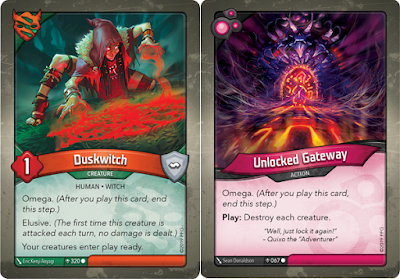 The last new mechanic, Omega, is the opposite that Alpha deserves. Being forced to end the Main Phase and go straight to Ready Cards after playing truly powerful effects like these makes you wish you didn't have to, but I'm still happy to see cards at this power level in my game nonetheless.

Duskwitch is just silly. Speed Sigil is already a nutty KeyForge card that breaks games open, so having one that's just for you and for all creatures in all Houses is nutty. Putting this effect on an Artifact, as I've heard naysayers debate is crazy talk. Not all decks have Poltergeist or Gorm of Omm. Yes a 1 Power creature is vulnerable to sweepers, but the Elusive is what keeps it from not being utter trash. Unlocked Gateway is a truly spicy wrath. Having Omega really punishes you for making a board then playing it as the last card in a turn, but hopefully Dust Imp and Trubaru are among your side of the board, and others with Destroyed abilities as you clean up with an Action card that doesn't give out any Chains.

Among the first few spoilers, we've seen a few cards from each House (except Sanctum for some reason). Here are some of the individual cards I'm very interested in; House by House. 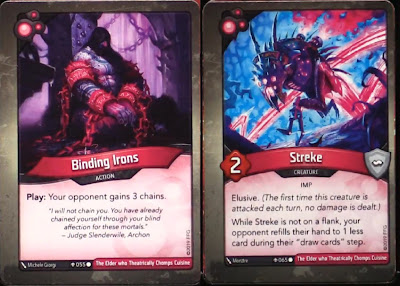 Binding Irons is a unique effect you'd expect to see more on the most punishing House. The simple design of your opponent gaining 3 chains is brutal. Streke is already a pretty annoying looking card. Sure it's weaker in stature than Succubus but giving it Elusive makes it much more resilient than succubus. I've heard people wonder why it doesn't have Deploy, and that's crazy talk. That downside needs the tax of being sandwiched in the Battle Line, and letting it be that easy to enable in the late game is unreasonable. It's probably a better Succubus and one lots of players will be annoyed to fight against. 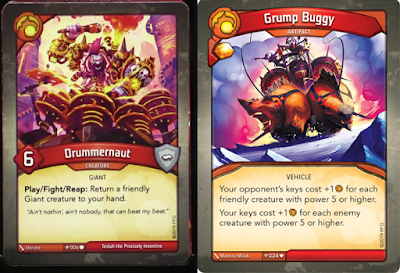 One of the few Artifacts we've seen so far, this one has a very clear goal in mind. Have your board full of big boys; clear away your opponent's big boys. A tax effect – something Brobnar is known for – that's relevant at all stages and has a lot of interplay from your opponent will make for very interesting games. Drummernaut is a nice design. Something about Brobnar war drums calls them back to the safety of your hand, to heal, and come back out to battle. It may make me wonder if there's going to be Giants in other Houses. Certain Houses are known for their races of people – the Giants of Brobnar are as rooted in as Knights are to Sanctum and Thieves are to Shadows. There's potential for a Giant to don armor and join the Houses of Sanctum or one heavily experimented on by the Scientists in Logos. If that's the case, this increases the value of a repeatable play trigger like this. Let's just hope they don't reprint Hunting Witch because you can bounce him indefinitely for practically infinite æmber. 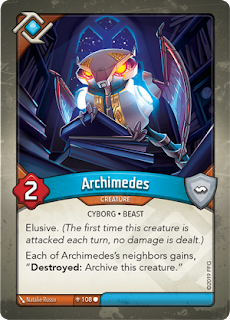 A lot of the design space in this set has been centred around battleline placement. This robot owl is one of them. Just like Streke, giving this Deploy is crazy talk. Key creatures with Destroyed triggers are all the more safe with Archie looking out for them; and being able to just drop him into place is a little strong – looping them around to get the Play and Destroyed triggers quicker than waiting for the Discard Reshuffle. Don't forget that this is true for as long as Archie is around, so a Turn one Archimedes, and building your team around him means you can replay your team a lot quicker than a deck without such archiving. 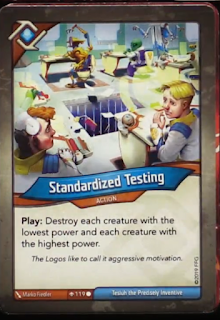 Standardized testing is a very funny mass removal Action. Seeing how large and how small each creature can be and leaving the middling guys is such an interesting design – and more open to variance than most Logos removal pieces. As long as there are creatures on board, this will always hit something. 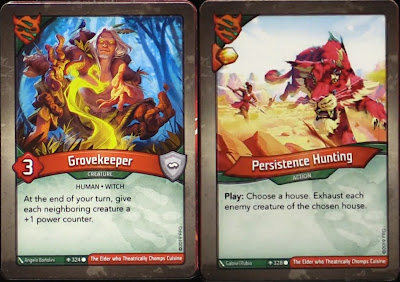 Another key creature in the 'placement matters' cycle. Grovekeeper actively improves the quality of your creatures and will keep doing so the longer its around. Mass exhausting is a big tempo play for Untamed – other than Lost in the Woods. Nocturnal Maneuver is already strong, but making a third of your opponent's team sleepy is decidedly strong. 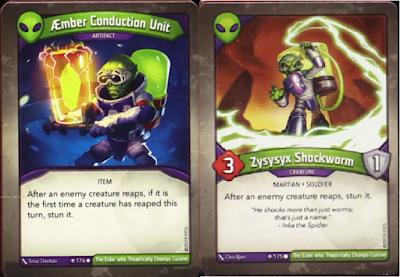 This is an interesting theme they're putting into Mars. Stunning a reaping creature is such a tempo blowout. That's why the Conduit only stuns one creature; too strong if it had the continuous effect like the Shockworm. Either way, this delay tactic is very powerful. 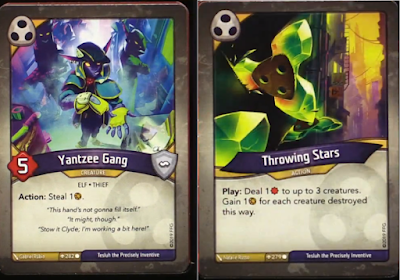 It makes total sense that one of the strongest steal cards was House-shifted. Yantzee Gang is Pit Demon by any other name, but having a large creature steal most turns is definitely a solid effect for Shadows. Putting the effect of a Mack or a Seeker Needle on a one shot Action, removing up to three creatures and gaining three æmber will become a favourite in one of the game's stronger Houses.