Review: The Batman Who Laughs: The Grim Knight #1 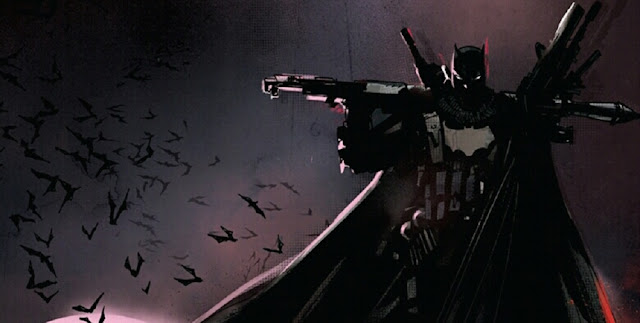 “A Grim Knight In Gotham” 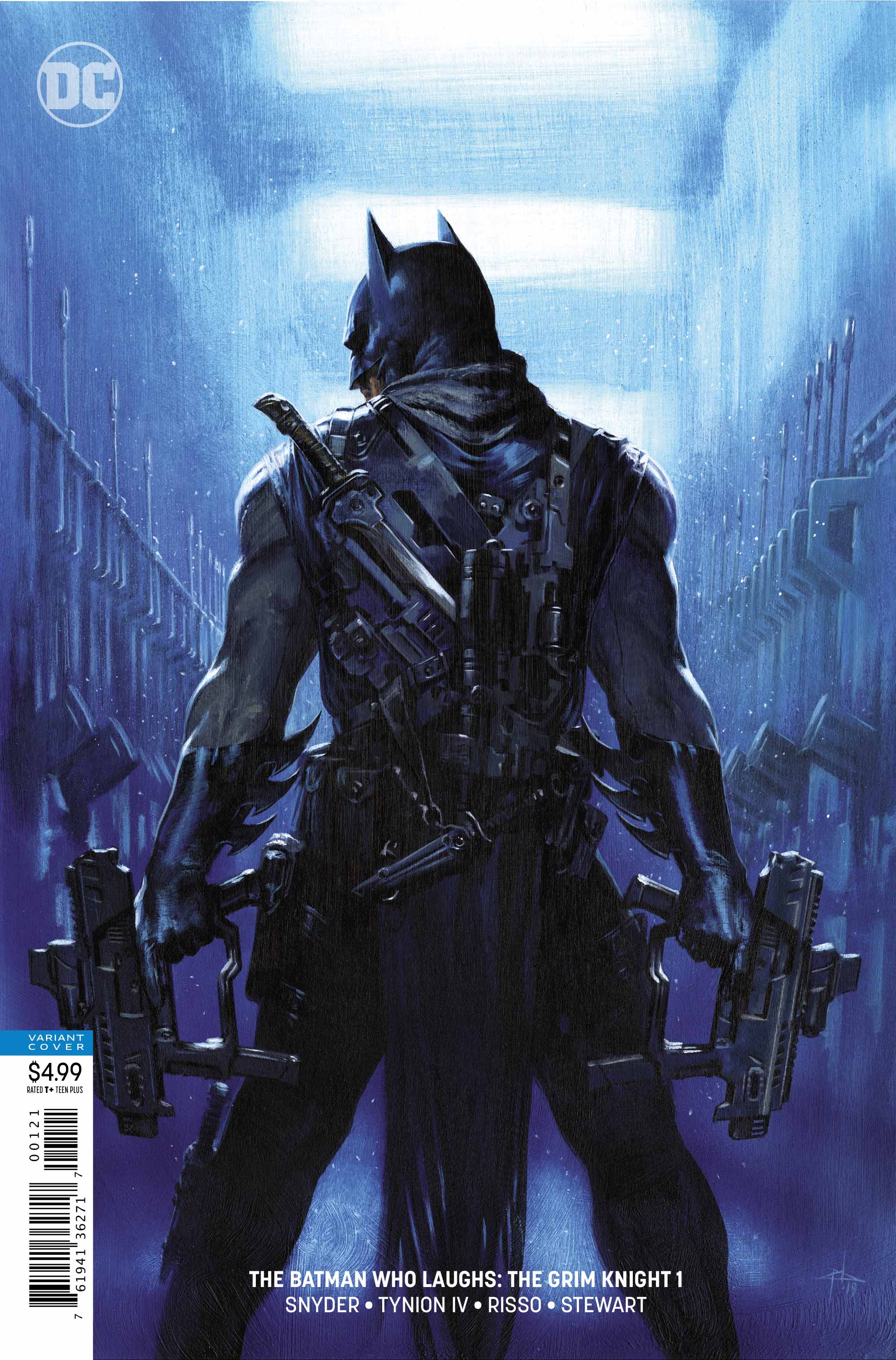 The Batman Who Laughs has returned, bringing with him yet another evil Bat-Doppelgänger: The Grim Knight. Anyone who’s been reading the brilliant Batman Who Laughs mini-series will know exactly what I’m talking about. If you’re not, you should be. I know that this issue is a one-shot special, but it will make a lot more sense if you’re up to date with the mini-series.
Thanks to the brilliantly bonkers Dark Nights: Metal, we’ve already met a multitude of evil versions of Bruce Wayne. The Devastator: a cross between Batman and Doomsday. The Red Death: an evil Dark Knight with the powers of the Flash. The Dawn Breaker: a corpse-like Batman wielding Green Lantern’s ring. The Drowned: Bryce Wayne; a female villain with the abilities of Aquaman. The Murder Machine: who has Cyborg’s otherworldly armor and abilities, combined with Batman’s own formidable tech and fighting prowess. Of course, we mustn’t forget The Batman Who Laughs: a Dark Knight who has become what he hates the most, a Batman/Joker hybrid.

The newest evil Caped Crusader is known as the Grim Knight. All we have seen of this Batman so far is that he’s a stone cold, machine gun toting psychopath! Each of the darker knights has received their own origin special, so it’s only right that the vigilante Batman should get one too. This dark genesis could be the most chilling of them all, as it so closely mirrors that of the one, true Batman. This is a black and broken mirror though, and one that could only have been imagined by Scott Snyder and James Tynion.
The writers have picked up from issue #3 of The Batman Who Laughs, where The Grim Knight kidnapped Commissioner Gordon. This issue divulges the reasons why. Tynion and Snyder have created a nightmare origin for this “Punisher-esque” Batman, that is truly inspired. The mysteries uncovered throughout this story, which run parallel to events witnessed in classic tales like Batman: Year One and The Long Halloween, are absolutely brilliant. The way this Bruce Wayne’s life deviates from that of our own Batman is cleverly, but tragically, well researched and crafted. 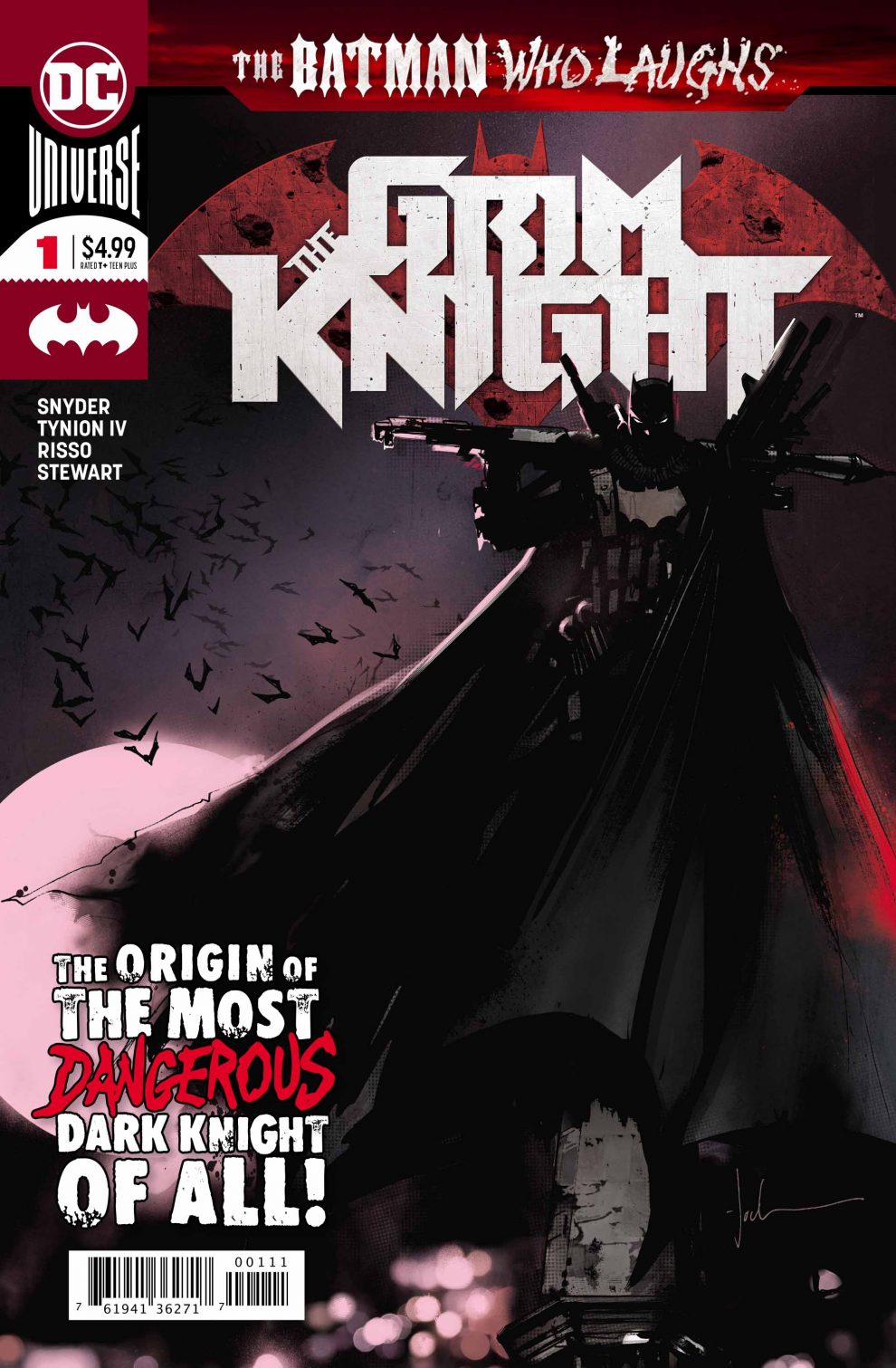 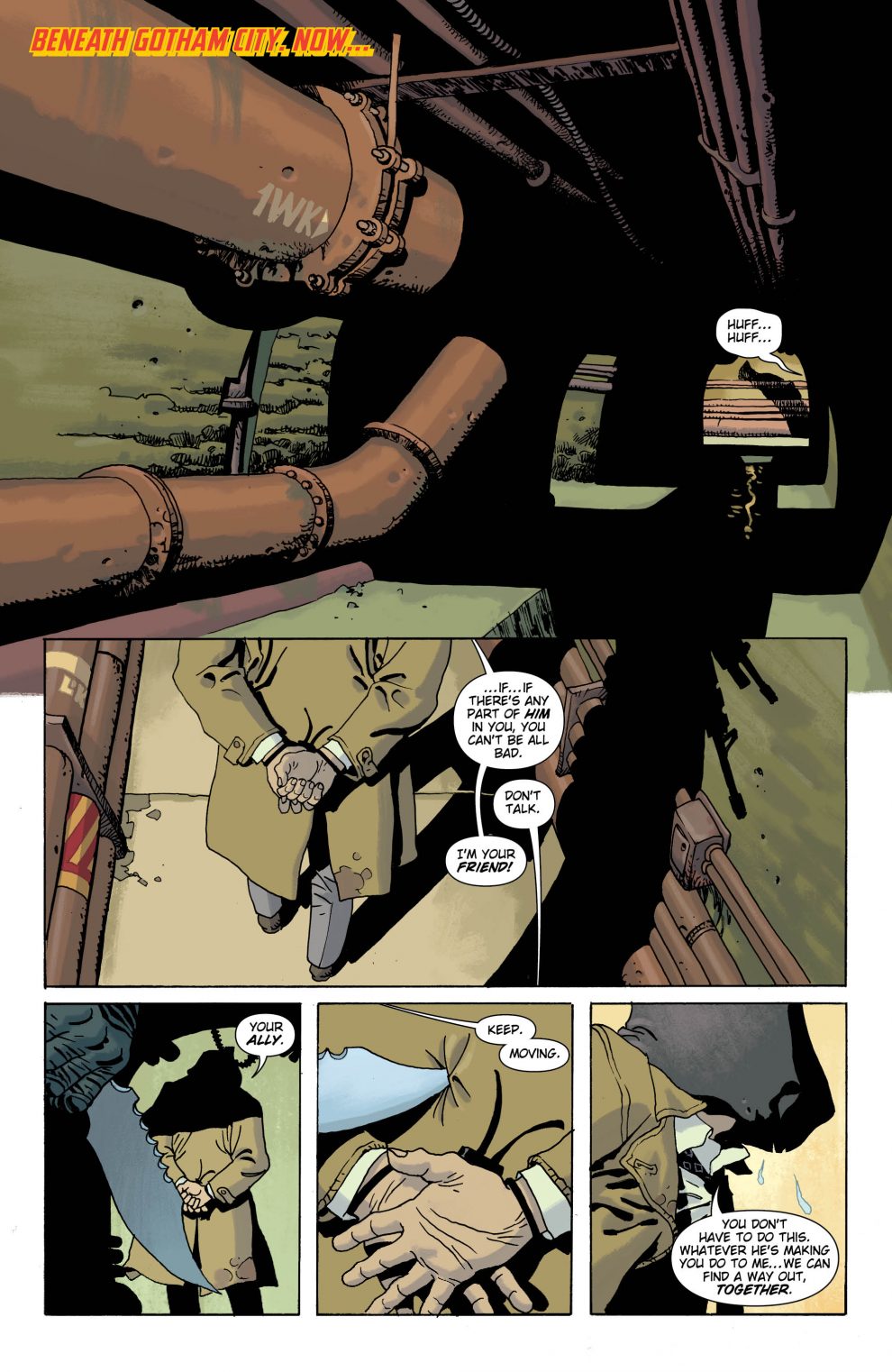 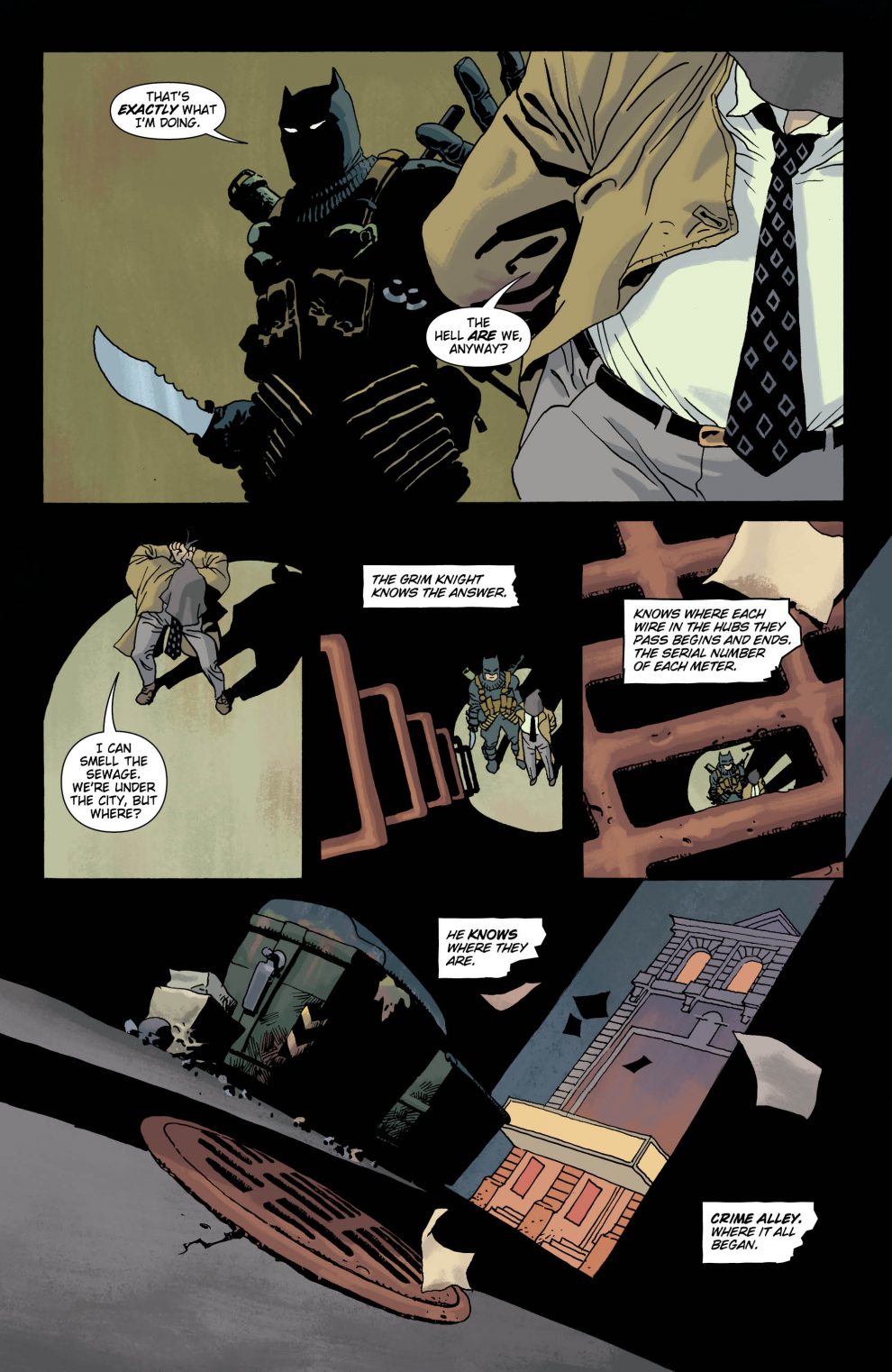 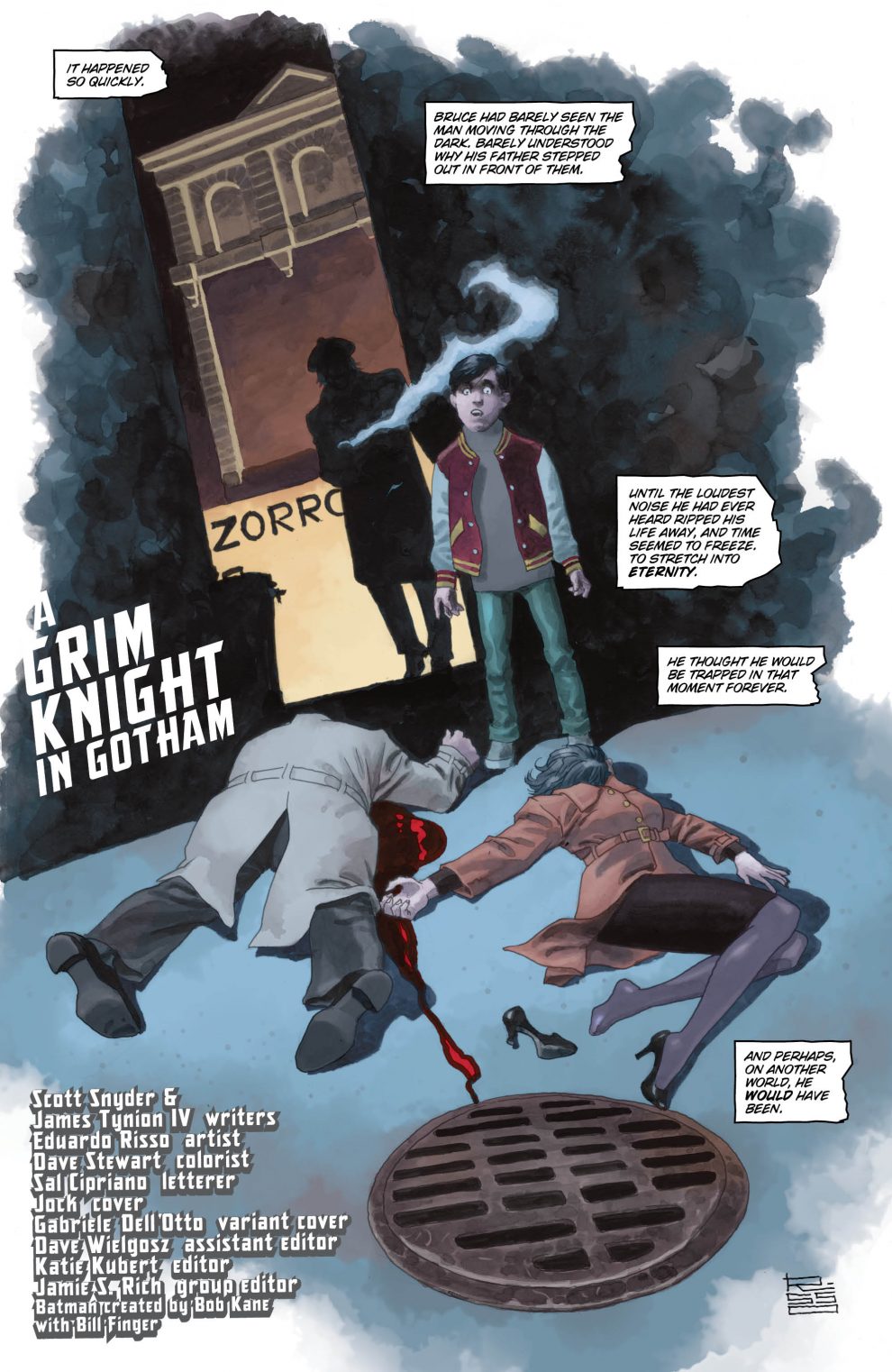 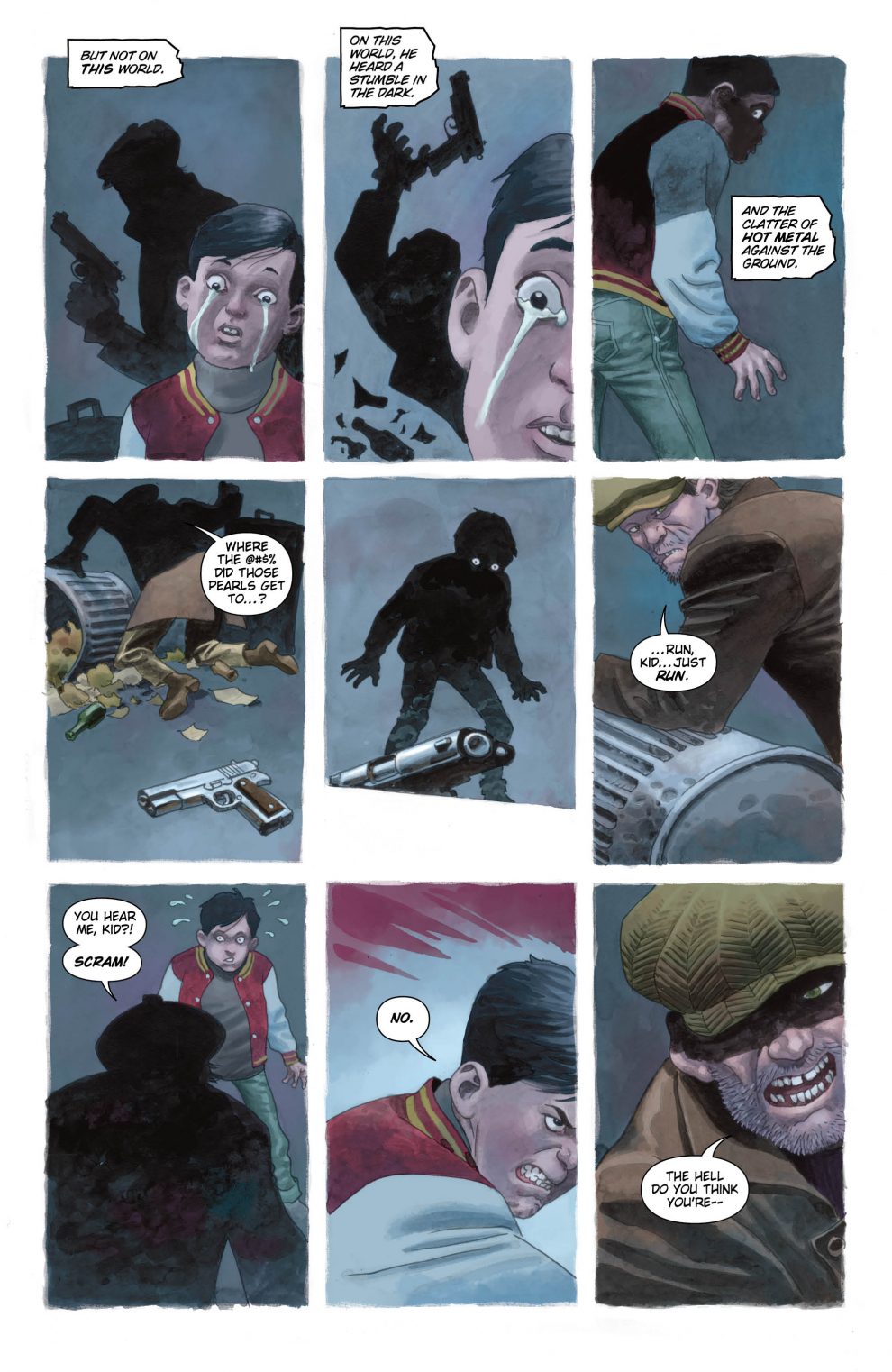 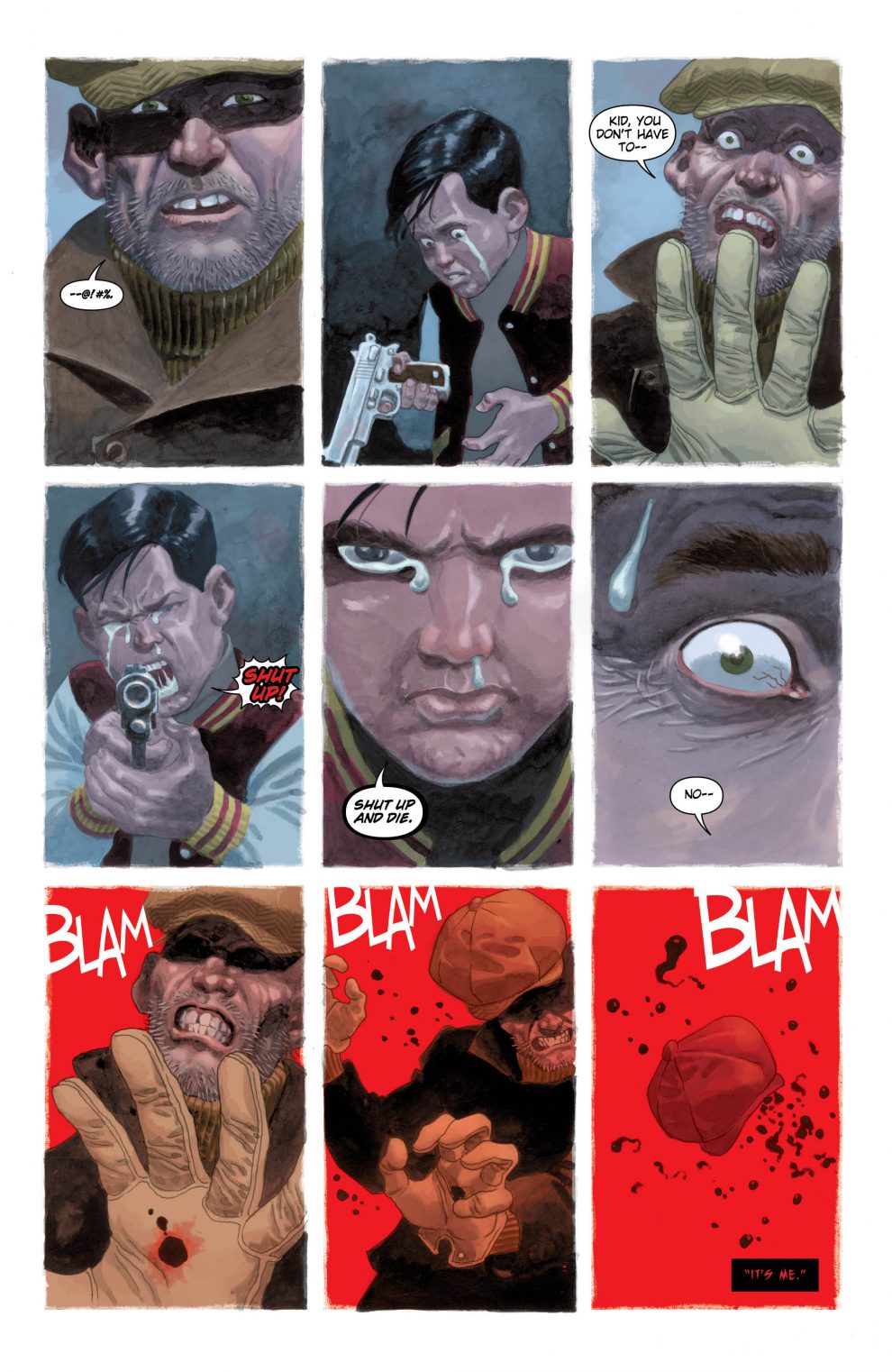 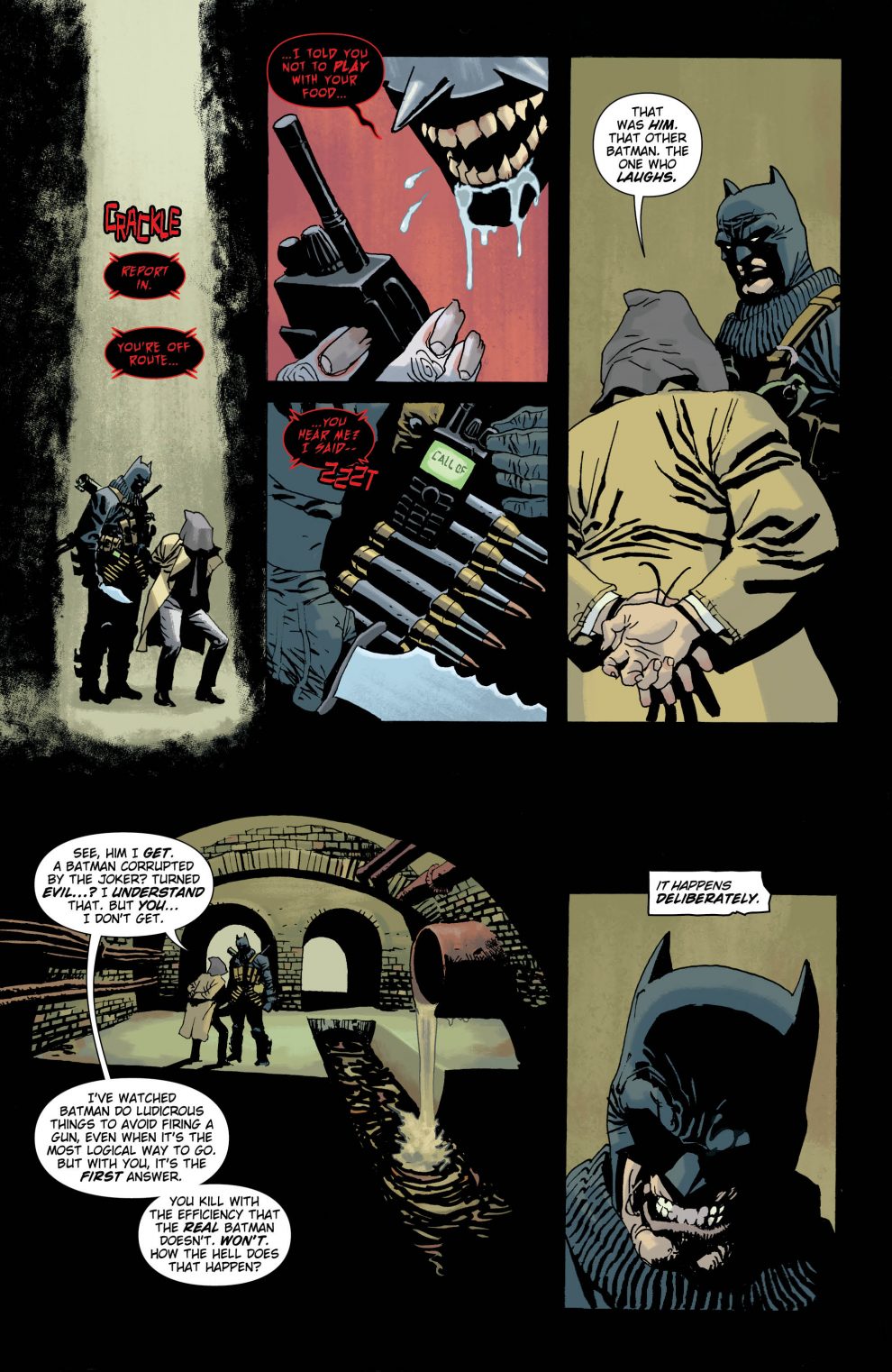 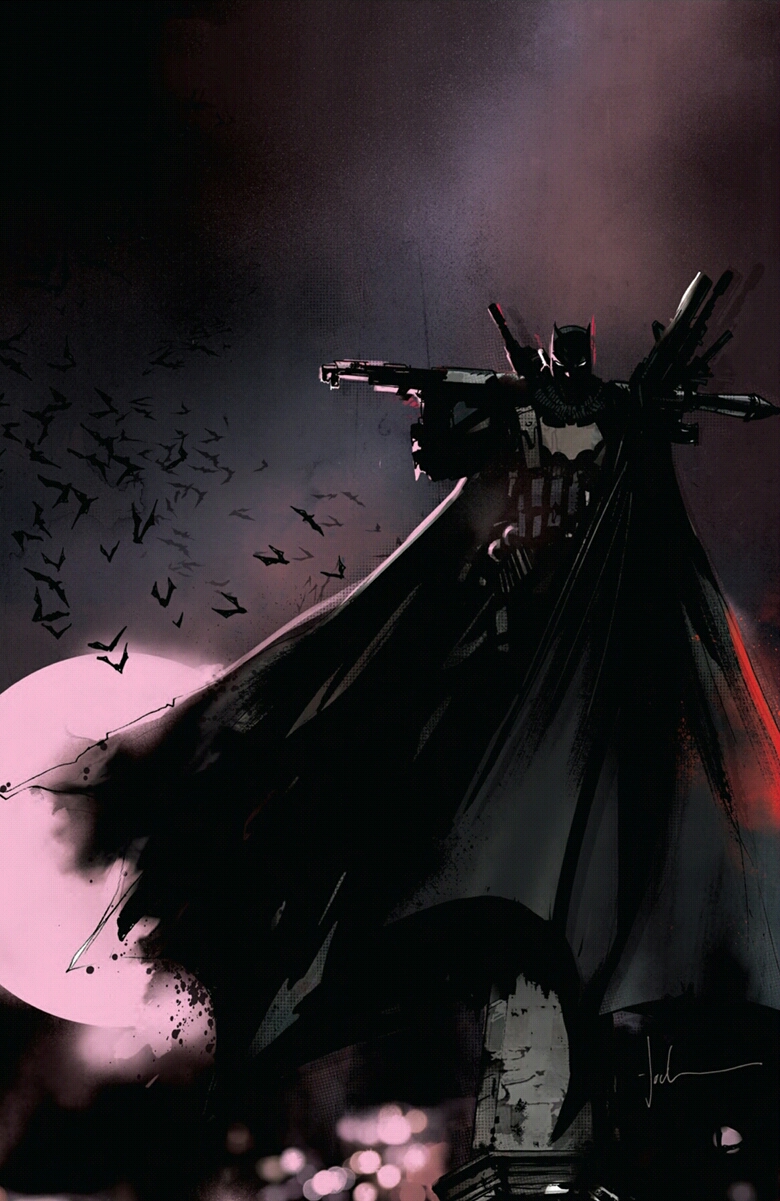 A minor spoiler follows. The relationship between The Grim Knight and the Jim Gordon of his world is chillingly poignant. I don’t want to give too much away, as I think that every true Batman fan should read this series, but this is a terrifying “What could have been” story for our own Batman. What’s also really clever is how this evil Bruce Wayne, who relies far too much on guns, can be bested physically, both by our own Dark Knight (see BWL #3) and Jim Gordon himself. Our hero is all the better because he doesn’t rely on guns and lethal force. I love that!

The art in this issue is stunning. I fell in love with Eduardo Risso’s Batman back in 2003, when he illustrated the terrific “Broken City” (Batman #620 – #625). His art is very atmospheric and balances the fine line between heightened realism and caricature beautifully. The way Risso, and color artist Dave Stewart, alter their styles slightly to differentiate between scenes set in the present, and the flashbacks to the Grim Knight’s past, is really well done. Check out the way the art and colors change from the standard, more solid, comics art on pages one and two, to the softer, more washed out/water-color style of the flashbacks on pages 3-5. Wonderful work.
Some of my colleagues are wondering why Jock, the artist on the main BWL series, didn’t draw this issue. I agree with them up to a point, but this story breaks the ongoing arc dead-center, so, having a change of style to suit the shift in tone works brilliantly. Dave Stewart and Eduardo Risso have also managed to create a tone that will fit in perfectly with the other six issues.
Sal Cipriano’s solid lettering also helps. I am an ultra nerd, so I would notice the change in artists, particularly when this story receives its obligatory trade paperback collected edition. Sal’s work will help make readers feel like this is all one story. This guy’s one of the very best in the business.

I’m a sucker for continuity and tributes to classic Batman tales of the past. I love alternate timelines, parallel worlds and “What If” stories. Batman is my all-time favorite comics character. This issue ticks each and every one of those boxes.
Thanks to all involved.