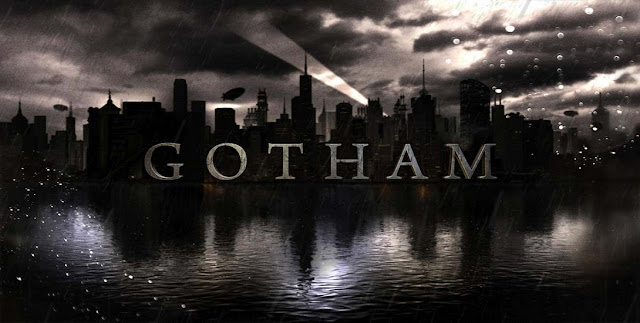 “Nothing’s Shocking”
Writer: Seth Boston
Director: Kenneth Fink
Starring: Ben McKenzie, Donal Logue, David Mazouz, Sean Pertwee, Robin Lord Taylor, Cory Michael Smith, Erin Richards, Andrew Sellon, Dan Hedaya & Sarah Pidgeon
Review by Steve J. Ray
Almost every season of every TV show ever made will have a “Filler” episode. A story that’s a flashback, or that stars more of the supporting cast, to give the big names a break. Back when it was announced that season five of Gotham would be its last, the show was reported to be running for ten more instalments. A few months later the producers adjusted that number to twelve, so that the series could end on its 100th episode. This is one of the stories that was added last minute, and very little was known about it, almost until the day it aired.
This is one of those “Filler” episodes… but it’s oh, so much more besides. “Nothing’s Shocking” is absolute class. 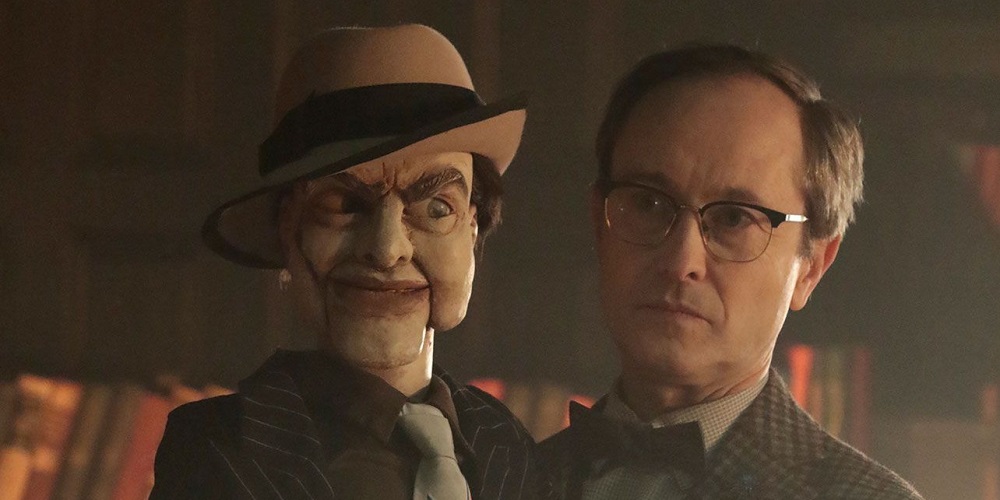 Giving Gotham a deadline and a definitive ending has strengthened it immeasurably. The writers, directors and cast are giving every line, every scene and every shot their utmost. In all honesty, this episode isn’t essential to the ongoing plot, and not seeing it at all wouldn’t damage the story in any way. Missing it, however, would be a crime.
This season Ecco more or less became Harley Quinn. We’ve seen Poison Ivy, the birth of Bane and even met Magpie. Last week Bruce and Jeremiah fought at Ace Chemicals, leading to the birth of the one, true Joker. The research that’s been done in bringing never seen before members of Batman’s rogues gallery to the screen, and updating others, has made this particular Bat-fan very happy indeed.
This episode is a fan-boy’s dream! The Ventriloquist and Scarface make an appearance, but to my mind so do two other classic Bat-Baddies. I’m not one for spoilers, so let’s just say that one of them’s a biter, while the other’s really only trying to save face. Come back and re-read this review after watching the episode, then you’ll know exactly what I’m getting at. See you later alligator, you’ll come back all doe-eyed, I promise.
It was wonderful seeing Andrew Sellon again, and having him use his real life talents for ventriloquism on the show was an absolute joy. His throat was clearly making the sounds, but those lips did, not, move! The little touches, with Oswald mis-remembering his name and calling him Arnold instead of Arthur were inspired. In the comics the Ventriloquist’s name is Arnold Wesker. Brilliant. 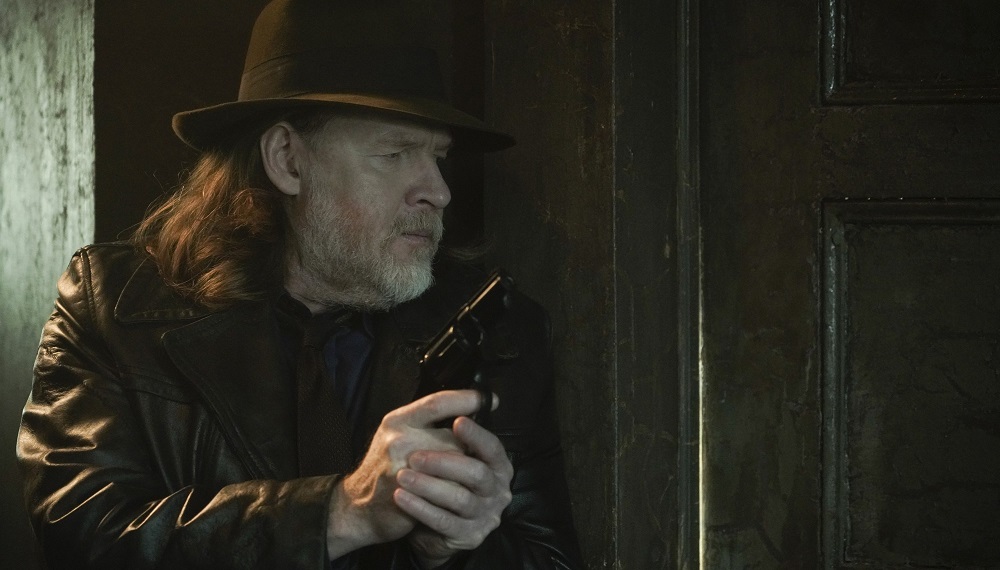 Bull In a China Shop

Donal Logue is one of this show’s unsung heroes and most underrated cast members. This episode deserves to be seen, as it’s a testament to this actor’s talent. For once Jim Gordon, Bruce Wayne and Alfred are supporting characters in the story, as Harvey Bullock takes another huge step on the road to redemption. His former parter Dix has returned, once again played by TV legend Dan Hedaya, and trouble has come back with him.
When we first met Harvey Bullock in season one he was a cop treading water in the darkest depths of the so called “Grey area.” Here was a guy who was almost more criminal than lawman. Over the last five years we’ve seen Bullock grow, arguably every bit as much as Bruce Wayne himself, into a true hero. Yes, he’s made mistakes and has skeletons in his closet, but he knows it, owns it and is fighting for redemption. 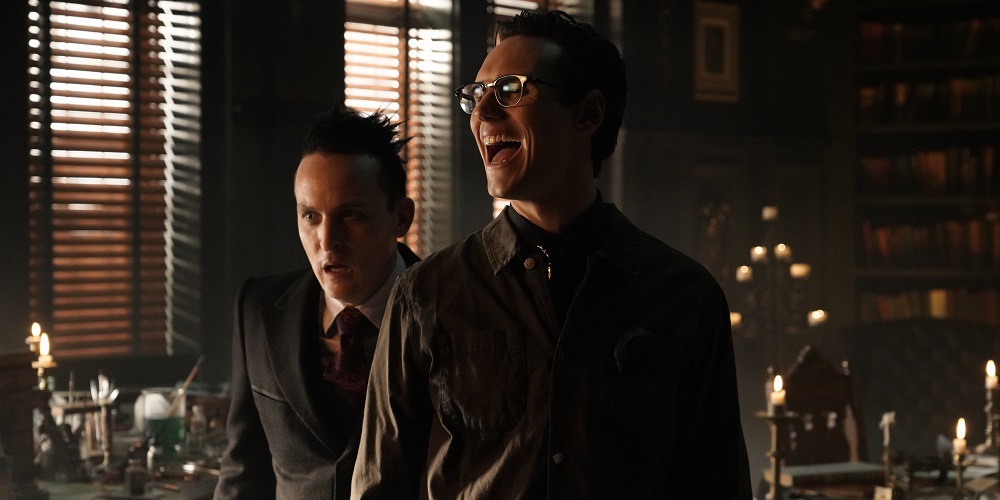 Riddle Me This. Why Don’t Penguin’s Feet Freeze?

I’ve not made it a secret how much of a huge fan I am of both Cory Michael Smith, and Robin Lord Taylor. They are every bit as much the dynamic duo of Gotham as Bruce and Alfred, or Bruce and Jim Gordon. These two gentlemen are the backbone of the show and their on-screen chemistry is a thing of beauty. Their love/hate relationship is one of my all-time favorites. They, as always, also deserve a mention this week.
Erin Richards also gives an outstanding performance. In reality we should hate this Barbara, but Erin gives the character so many layers, and subtle nuances. In this episode she’s not quite herself… well, she is, but she’s also completely beside herself at times.

Yes, come back later. My cryptic gene’s on overdrive today. 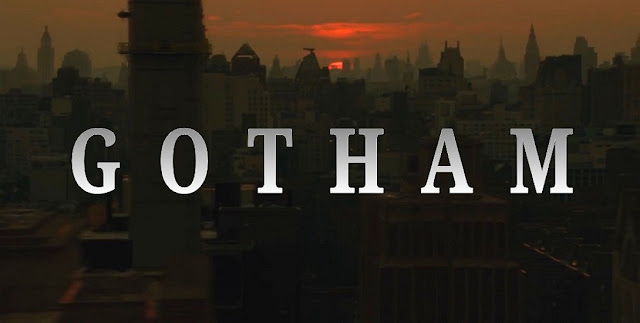 Veteran Gotham writer Seth Boston has well and truly delivered this week. He has fit more into 45 minutes of TV than should really be possible. Every actor shone, every line of dialogue fit and this episode stands well on its own, as well as part of a stellar final season. Even the guest stars were incredible! Sarah Pidgeon’s Jane Cartwright is vulnerable, sympathetic and terrifying in turn. Dan Hedaya isn’t a 49 year screen veteran for nothing, and his return to the show is a welcome one.
Kenneth Fink has directed a brilliant piece of television. “Nothing’s Shocking” was beautifully shot, intricately paced and Fink got great performances out of every single cast member.
This episode was all killer, no filler.