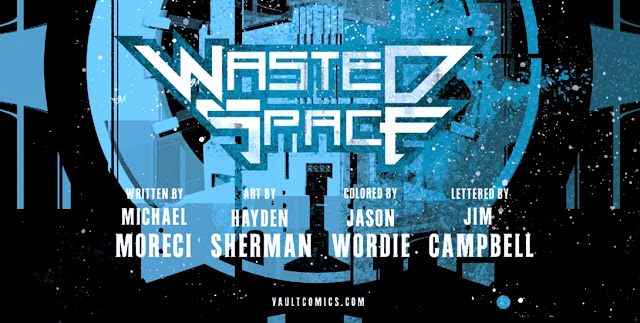 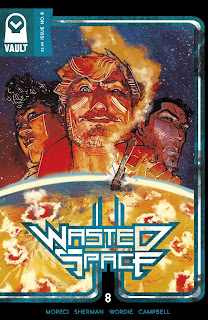 Fury is dead. After conspiring against Billy and the entire Gang, Dust's former lover betrayed the team, ripping off her fiance's arm and forcing him to take her life to save both himself, and his friends.

With Dust now missing a limb, the gang goes off on a side-quest to repair their blue-skinned friend, temporarily putting on hold their mission to destroy "The Creator." 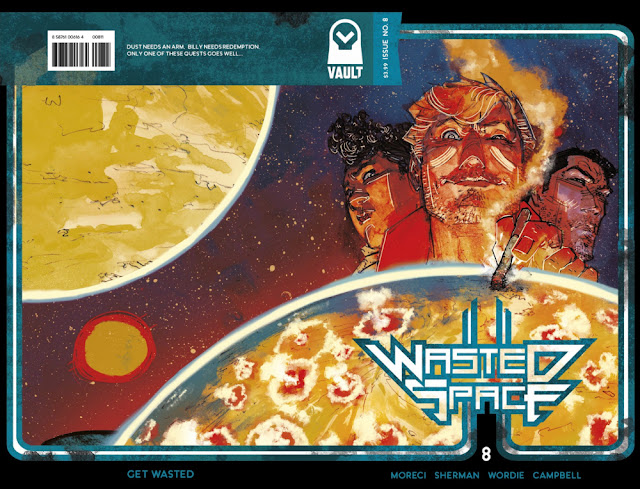 This series combines philosophy, sci-fi, comedy, politics, action and insanity in a cohesive, and entertaining way. How many other titles can do that? Every issue delivers thought provoking content and depth, mixed in with violence, comedy, sex, drugs and rock 'n' roll. Never, though, does any of it feel forced, or shoe-horned in. It flows, it's natural and it just works.

The most unreal thing about Wasted Space, in all honesty, is just how real it is. I see Molly, Billy, Dust, and even Rex, in people that I know and interact with on a daily basis. I see some folk fall under the slightest pressure, whilst others seem to survive and overcome the impossible.

The scenes with Billy and Dust in the temple, juxtaposed with Molly counselling her brother, are two of the best written, well drawn, cleverly drafted and executed conversations that I've read in over 40 years collecting comics, and a decade plus reviewing them. 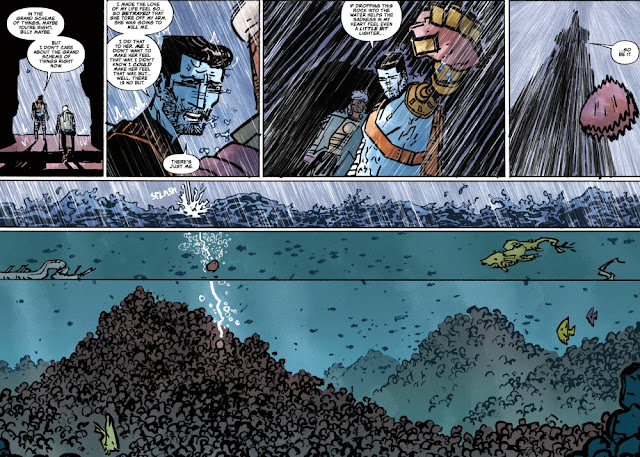 Michael Moreci, Hayden Sherman, Jason Wordie and Jim Campbell are delivering morality tales for the 21st Century, cunningly disguised as sci-fi comics. This issue alone gives us couples therapy, grief counselling, and espouses the power of faith in ways that are educational, but also - in places - absolutely hilarious.

The way a killer robot can express a desire to change and aspire to be more, whilst his human companion, a former preacher no less, can turn his back on faith and any attempt at self improvement, is both fascinating and heartbreaking. The biggest surprise though, is the way that the writing, and tiny expressions on the characters' faces, makes readers understand, sympathise and empathise with both sides of the argument.

Page 10 is amazing. The subtle shifts in Rex's posture and facial expressions are beautifully drawn. This is character with cybernetic eyes and robotic arms, yet rarely have I seen a more human reaction from a comic-book character. The way color artist Jason Wordie uses the hues of night, inside and outside the ship, to further add to the emotion of the scene as it unfolds, is sequential storytelling at its finest. 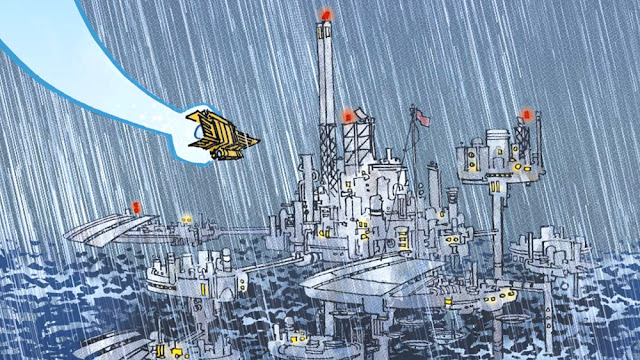 Letterer Jim Campbell's no slouch either. Pages 13-15 contain a TON of dialogue, but every word, sentence and paragraph is important. In hands of a less capable letterer those pages could have proven very hard to read.

I often hate the Manga and Anime tropes of exposition, on top of explanation, piled upon incessant talking and blah, blah, blah, when all that I'm craving is action. Wasted Space #7 provided all of the boom, but this month's instalment delivers the aftermath.

The quiet moments, the times of reflection, reaction and recovery are vital. Once again this book is delivering life lessons, but through colorful characters, who are often more human than some of the real-people that populate this unreal planet of ours. 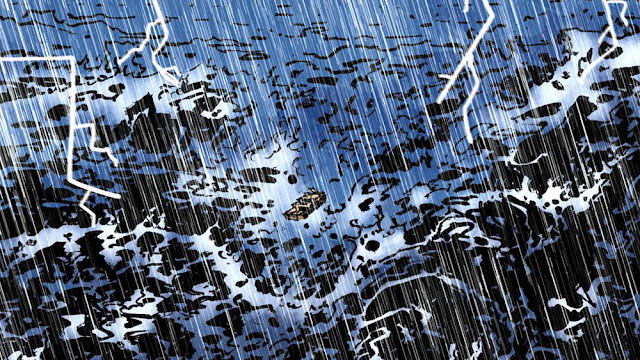 Whenever anything, be it a TV show, a movie franchise, or a comic book, delivers constant quality, one can cynically, secretly be waiting for the infamous moment when the story "Jumps the shark." This title has given us eight incredible issues in a row, and doesn't show any signs of letting up.

I LOVE this series, and will sing its praises to anyone who'll listen. I have faith that this is one of those books that's going to be remembered, and talked about the way that classics like J.M. DeMatteis' Moonshadow, Neil Gaiman's Sandman and Alan Moore's Swamp-Thing are.

Anyone who knows me at all will be well aware that there is no higher praise.

Images Courtesy Of Vault Comics And The Creative Team