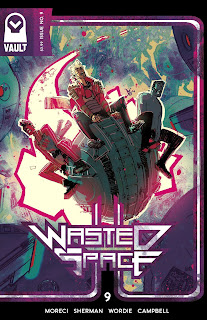 The end of the month can mean many things, to many people. For some it's when they have fill out their tax returns, to others it's the joy of pay day. For me, though, the end of every month brings a magical gift that's better (and lasts far longer) than money: The latest issue of Vault Comics' weird and wonderful Wasted Space.

Unlike some very underwhelming paychecks, this series never disappoints.

The latest issue focuses on wealth, war and all the horror involved with each. Over the last century most wars, whether the governments and countries involved in them admit to it or not, have all been led by greed and money. 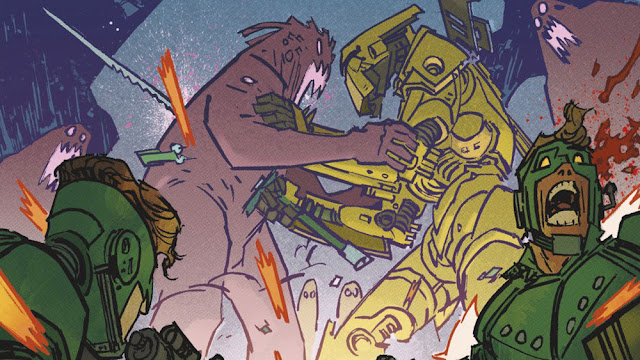 War! What Is It Good For?

The honest answer is causing suffering and getting rich, if we're all being honest. Now, everyone reading this might be thinking. "Whoah there, Steevo! Isn't this a comic-book review? Where's all this deep shiz coming from?" The neat trick that Michael Moreci pulls off in every single issue of this book is the way he's really getting all the things the bug the bejeezus out of him about this crazy world of ours off his chest, but makes it hilarious, thought provoking and entertaining as hell.

Most of us want giant robots, alien creatures, monsters and mayhem in our sci-fi. Yeah, we get all that too, but that's just gravy. The meat and bones of Wasted Space is the amazing, real characters and situations this series delivers. It may all be wrapped up in a setting based in a galaxy far, far away, either in a far flung future, a long time ago... or even happening right now. The scary part is, much of it actually is going on somewhere, but without the cool robots and spaceships. 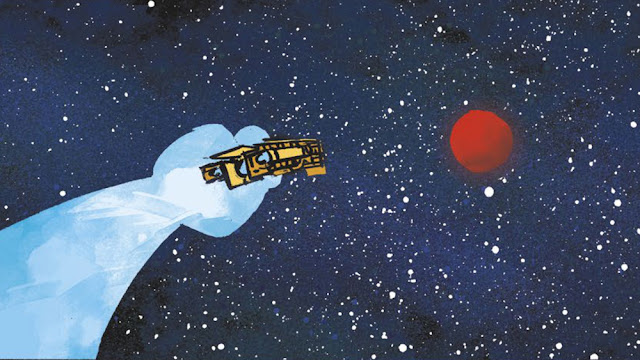 This issue also delivers fuzzy aliens, strange new worlds and more than enough boom to shake the room. The art team of Hayden Sherman and colorist Jason Wordie deliver sci-fi staples that are anything but. I love these guys. Their cityscapes, spaceships and weird and wonderful critters. Hayden's cartoony faces, more expressive than those of many Hollywood A-Listers (pre AND post-botox) and Jason's Bob Ross knife painting color art. Yum.

Then we get Jim Campbell. I say it a lot, and it saddens me that many other reviewers and comics critics don't. Letterers are the unsung heroes of the comics art-form. A pro-letterer can make all the difference, transforming a book that may be well written, and contain gorgeous art, but be an unintelligible mess. Jim Campbell works his A.S.S. off every single issue, making this - quite word heavy - series an easy and joyous read.

Thanks, Jim. Thanks Michael, Hayden and Jason. Thank you, Vault Comics. 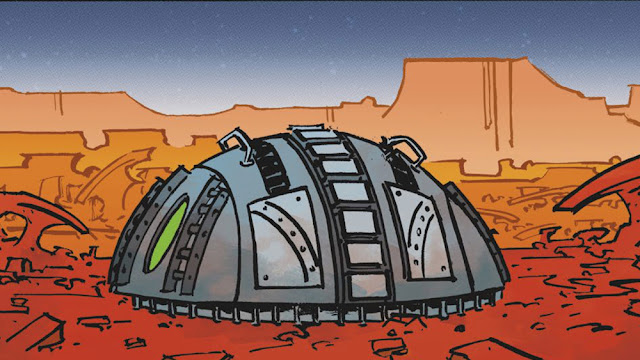 What other comic has protagonists deliberating about a sandwich filling, and can deliver words like these?:

We're just a bunch of self-aware animals. We can claim noble ambitions, maybe even practice them at times, but ultimately we're ruled by instinct. Our instinct is to survive, and greed, the heart of all conflict, is just the will to survive in extreme. We want to feel safe, but because we don't know what tomorrow brings, we can never have enough to feel truly secure. So we fight. We take from others -- their power, their land, their everything. We're compelled to make ourselves strong and everyone else weak.

The end of this issue is explosive and I'm on edge. I have to say that our heroes are in a real hot spot and the next four weeks are gonna be LONG. I was thinking about having mushrooms with tonight's steak, but may just lock myself away with a jar of peanut butter and Get sugar, nuts and protein Wasted instead.

I'll see everyone here at the end of May... I hope.

Images Courtesy Of Vault Comics And The Creative Team