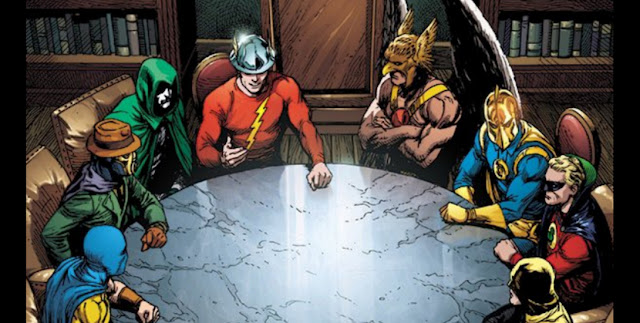 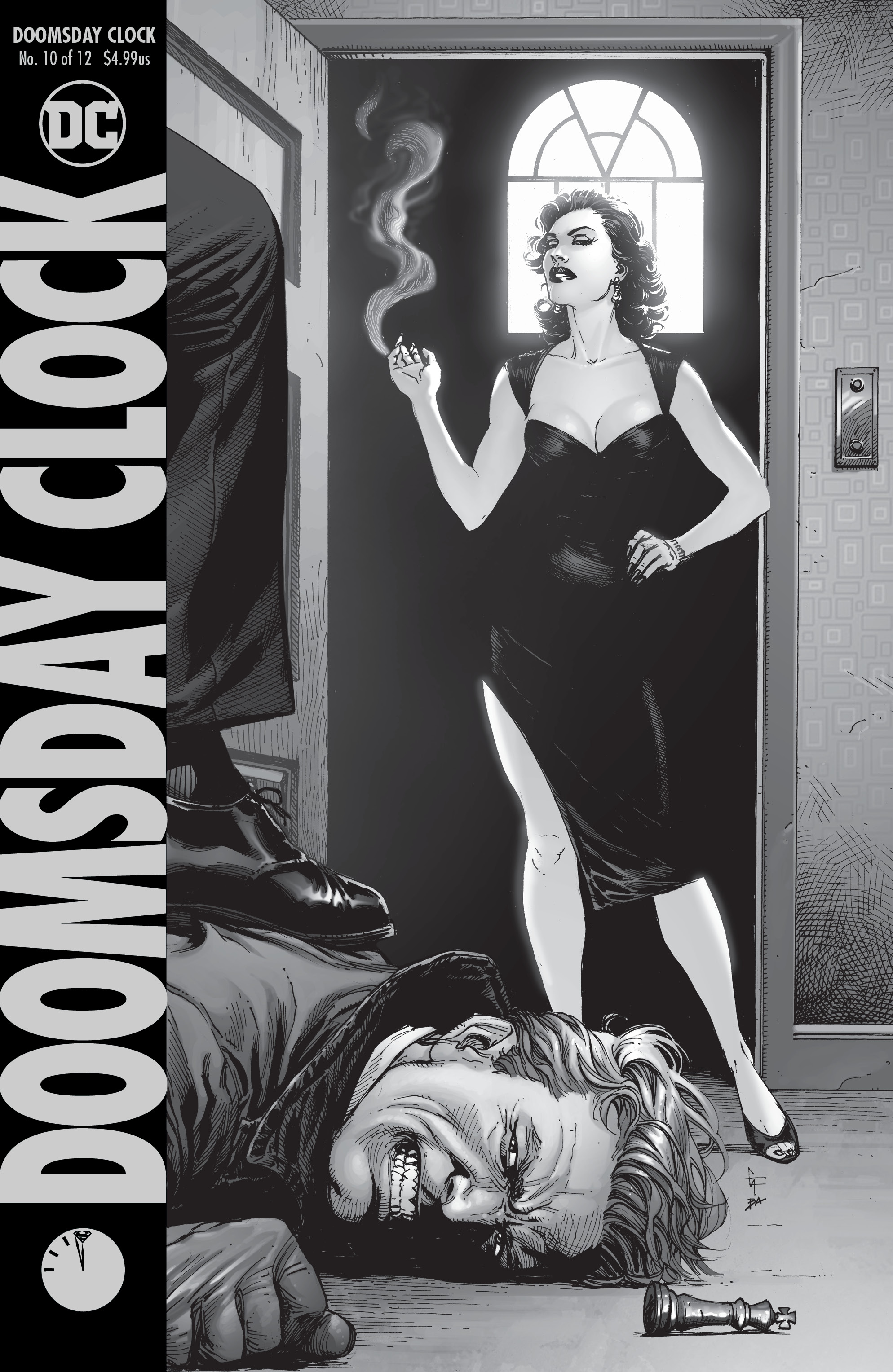 O.K. I have to admit that I am very fortunate. I haven’t reviewed a comic that I haven’t enjoyed in six months, or more. Doomsday Clock #10 could actually go down on my list as a contender for best single issue of the year, alongside the wonderful Detective Comics #1000. Every single part of this comic just clicks… and resonates.
From the opening pages, depicting a fictional movie set in a fictional world, featuring fictional characters, this issue had me hooked. I remember the old Gene Colan/Don McGregor Nathaniel Dusk comics from the early 80s. The way that writer Geoff Johns has woven these fictions into his own is nothing short of inspired. The original Watchmen had its pirate comic, this is the Doomsday Clock equivalent… and more besides.
Doctor Manhattan’s manipulation of time, and his meddling in the histories of the multiverse, has been given one of the most grounded and almost mundane focuses. All this in a cosmic, universes shattering series. Jon Osterman’s relationship with the poor, doomed thing that is Carver Colman is absolutely fascinating.
Extremely reminiscent of Watchmen #4, where we first experienced Manhattan’s incredibly unique perspective on time, this issue goes even deeper. Johns has written perhaps the single cleverest look at, and dissection of, the DC multiverse to date. His vision of the multitude of crises, and retcons, comics fans have witnessed since the legendary original Crisis On Infinite Earths is both a loving dig at, and joyous love letter to, all that has gone before. 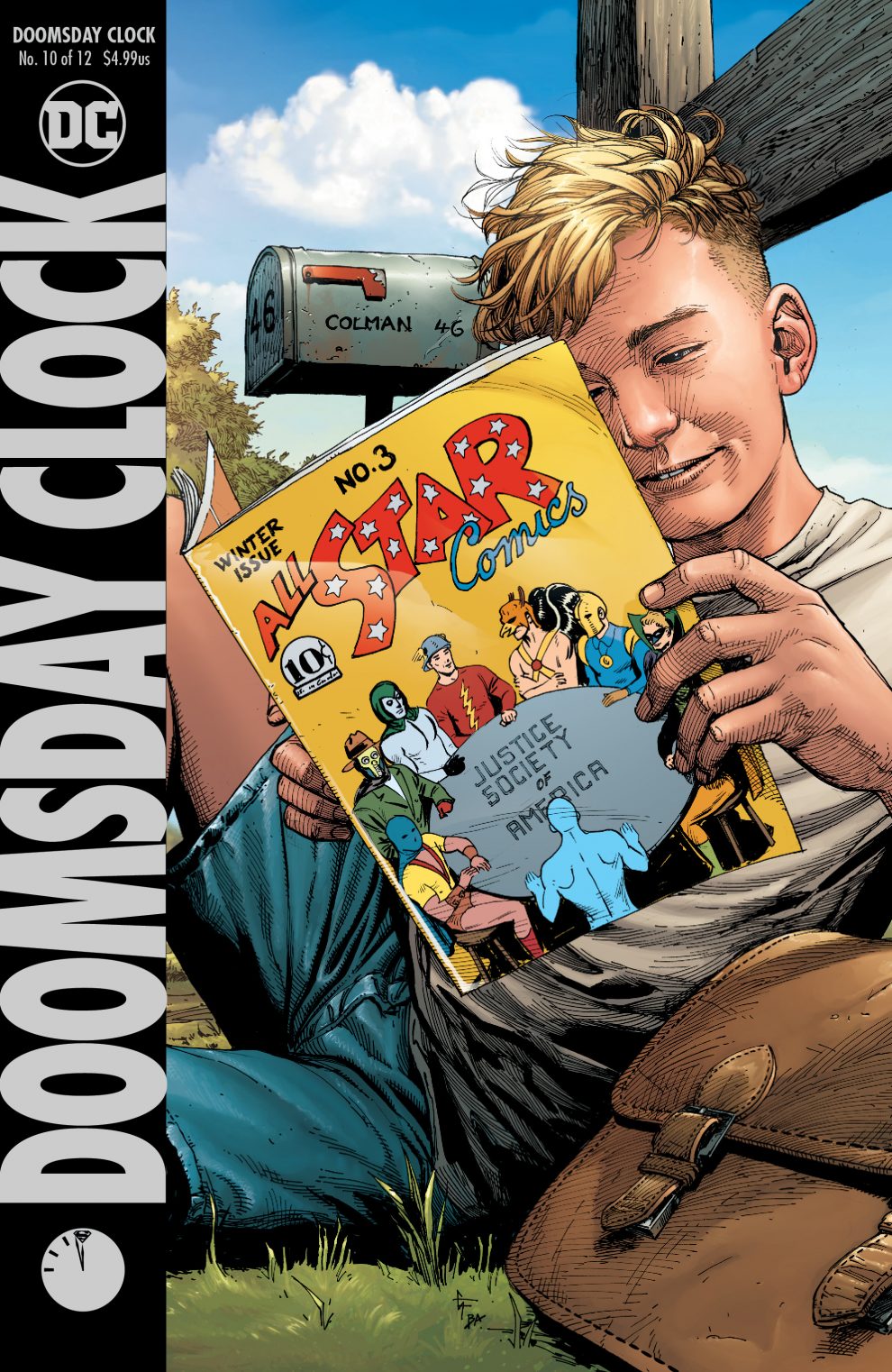 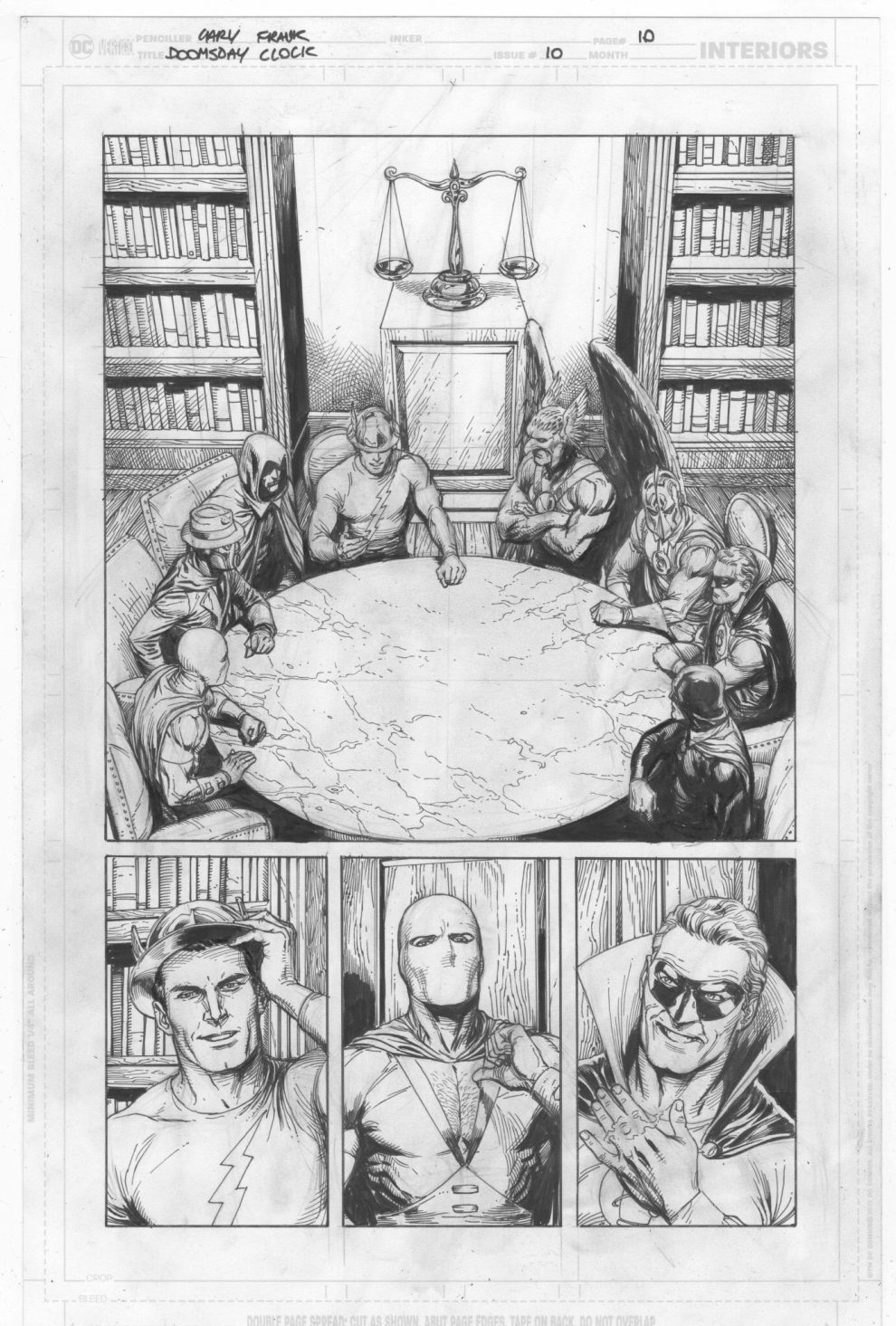 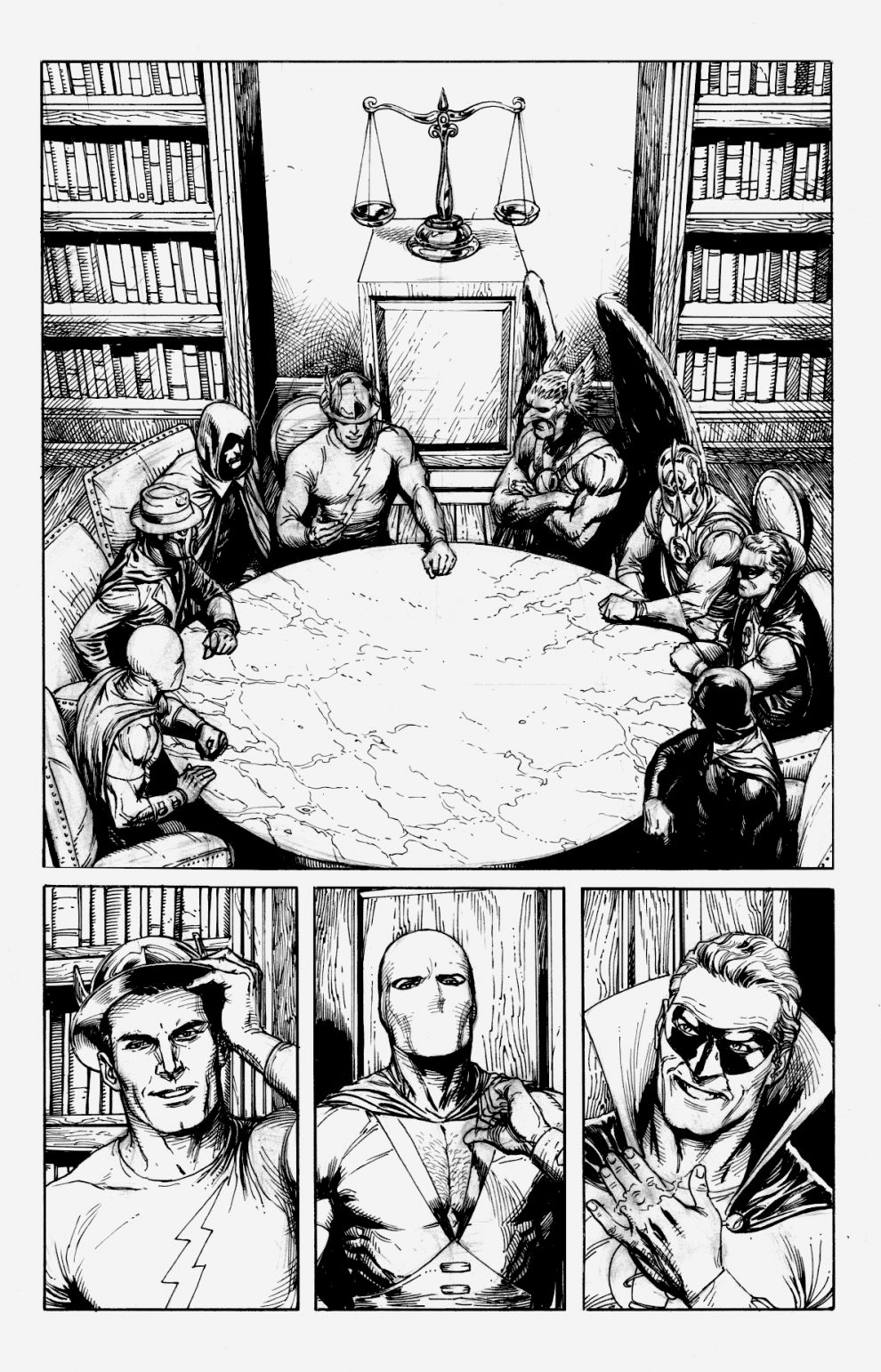 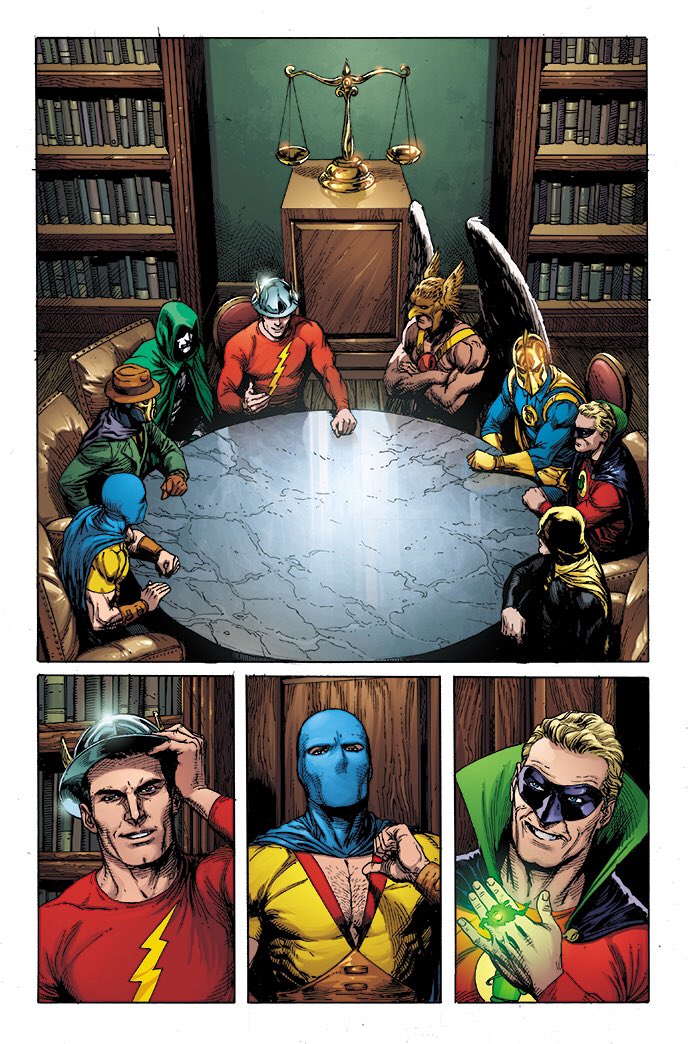 Where Does One Draw The Line

Gary Frank and Brad Anderson don’t disappoint either. I don’t know which of these artists is responsible for what, when it comes to the cover and opening page, both of them monochrome, but I’m impressed as hell. The way all the black and white pages are “shot” feel exactly like a 40s/50s pulp noir movie, right down to the lead actress’ face never being quite in focus, but always surrounded by a halo of light. Genius.
When color does creep into the pages is really pulls readers out of the movie within the comic, into the studio soundstage where the protagonists are performing their scenes. Baubles on a Christmas tree, and flares from the studio lighting act like a leading lady’s slap to the face, waking us up and dragging us out of one fiction, into the larger story that surrounds it.
Oh, and then there’s that page. Compare the pencilled version to the final, colored page. That’s what a top level color artist brings to the table… quite literally in this case. Anyone with internet access will have already have seen the stunning Justice Society page, but without context it was just a beautiful teaser, as opposed to an annoying spoiler. When you do finally read it, and the pages that follow it, though…
… Wow!

With only two issues remaining I remain absolutely spellbound. While it may not be the groundbreaking literary masterpiece that the original Watchmen was, this series is still amongst the finest comics titles being produced today. In terms of how readers view the entire history of the DC Multiverse, however, this incredible story will rank as one of the most important and pivotal of them all. Yes, Crisis On Infinite Earths included. The secrets revealed in Doomsday Clock #10 have made an old fan very, very happy.
Now, bring on the Man Of Steel.