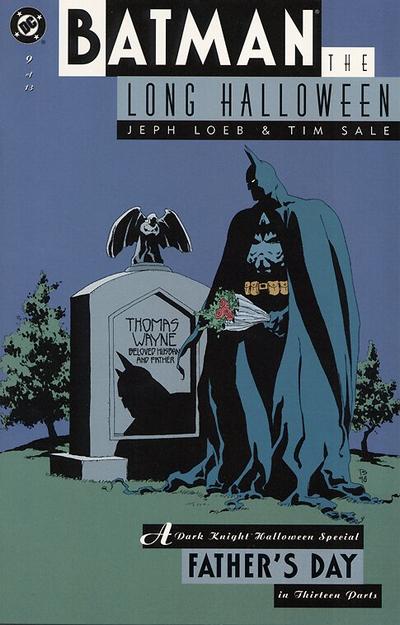 “The sins of the father shall be visited upon the sons.”
Falcone still rules organized crime and Bruce Wayne is locked up in jail. Meanwhile, the Holiday killer continues to tear through Gotham’s underworld.
The issue opens with a flashback sequence. Vincent Falcone greets Thomas Wayne while holding the bleeding body of a younger Carmine Falcone. Vincent demands Thomas operate on Carmine and promises him favors for saving his son’s life. Thomas - being a doctor who has taken the Hippocratic Oath - ends up saving Carmine.


Unfortunately, that all comes back to bite the now-imprisoned Bruce Wayne. Because of that one night, Harvey Dent and Jim Gordon suspect Bruce to be in collusion with Falcone. Worse still, Bruce considers how his father’s noble act allowed Falcone to survive to do terrible things to Gotham as the Roman.
“So if my father hadn’t saved the Roman’s life…all the lives, all the violence. How different Gotham might be.”

Decisions are hard. What may seem like a beneficial act may have unintended consequences in the future. Nothing is black and white. Interestingly, the visuals of the flashbacks reflect that idea. They are tinted with sepia tones, indicating a more morally-grey situation.
Almost every child-father interaction reaps consequences in this issue. When Holiday kills Sal Maroni’s father right in front of him, he surprises everybody and surrenders to the GCPD. Dent visits his father at a mental facility and receives the coin that will eventually become his trademark as Two-Face.
Even the callous way Falcone treats his daughter Sofia Gigante will have repercussions later in Dark Victory. Similarly, Catwoman’s annoyed reaction to Falcone are teases towards her true motives.

With the Gigante-Falcone scene, one can tell that Jeph Loeb is really playing the long-game with his plotting. He subtly lays seeds that are not addressed in The Long Halloween, but in its follow-up series, Dark Victory and Catwoman: When in Rome.

Fathers Are Not Perfect

The other thing about the child-father interactions in this issue is that they are all different. Some fathers treat their children with love, while others - like Maroni - treat them with restrained disdain. Fathers are not perfect.
That is displayed most clearly in Bruce’s perception of his father. He loves him, but even he is torn about his father’s choices. Meanwhile, Alfred is torn whether he has been a good enough father-figure for Bruce. The dynamic is wonderful and an excellent use of character parallelism. It's subtle and seeing the two characters divulge their thoughts adds tragic layers to the scene.

The Beginning of Dent’s Downward Spiral

This issue also continues Dent’s story arc on the road to becoming Two-Face. When Bruce is acquitted, Dent comes away with a strong belief that he only won due to his fame and money. He is desperate for any means to bring down Falcone, but his gambit with Bruce ended up being a dead-end. Now Dent’s faith in the justice system is shaken. This cynical mindset sticks with Dent and continues him down the dark path  leading to Two-Face.

Loeb and Sale add layers upon layers of complexity with their story. Each scene has a double-meaning, the characters are multi-faceted, and the plot sets up important events in future issues.

Nothing is ever simple in Batman’s world and this issue is an excellent example of how complicated it can get.

Images May Be Subject To Copyright
To check out our previous reviews of The Long Halloween chapters, click here.