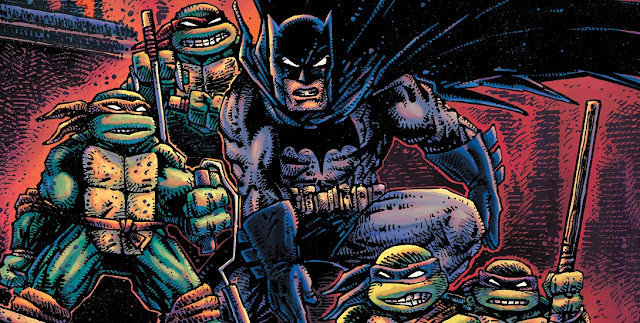 “Crisis In Half Shell” – Part Two 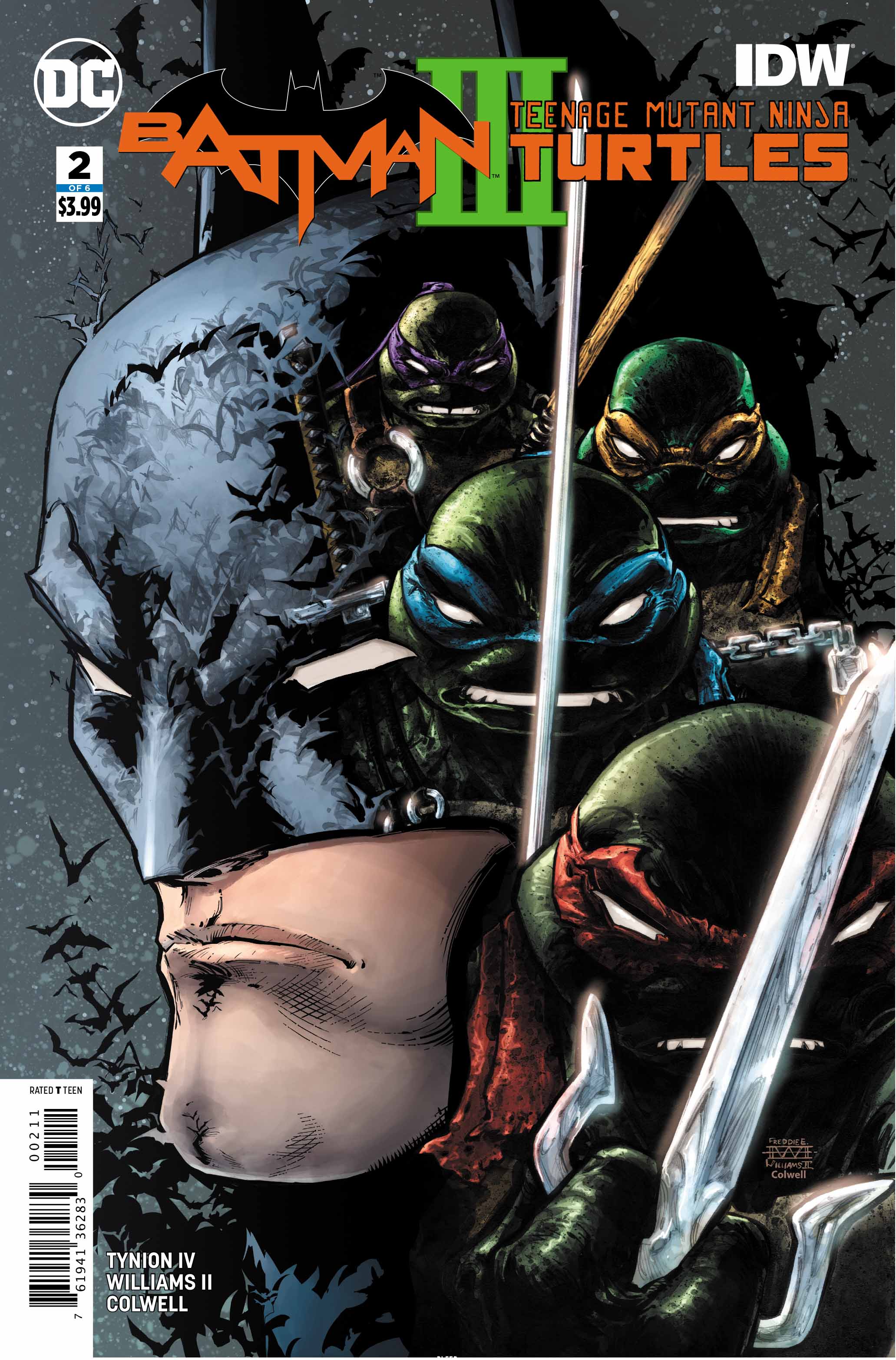 The final pages of the first issue of this multiverse bending super-saga, were absolutely great. Batman/Teenage Mutant Ninja Turtles III #2 takes the ball and runs with it.
Two universes, containing Batman and the Turtles, have somehow been merged into one by a version of the Anti-Monitor who has been possessed by Krang. Last month a monochrome Raphael (drawn by Kevin Eastman!) appeared with an important message. Our heroes need to listen, and learn.
It’s so great reading brand new comics that show so much love for what came before. James Tynion IV has always been a creator that does his research, clearly respects the past, yet can build amazing, creative and fun new stories that both honor the classics, and feel brand-spanking new. Throughout his incredible run on Detective Comics, his current superlative work on Justice League Dark, and now, on these very pages, he’s continuing this fine tradition.
I’m lucky enough to own copies of Crisis On Infinite Earths and Eastman and Laird’s original Turtles comics, so seeing them both honored and remembered so lovingly fills my heart with joy. The fact that Mr. Tynion knows that Krang didn’t appear in those stories shows his knowledge of this era and his respect for it. The fact that he also knows where the character did come from, and clearly understands his motivations, is a huge bonus. This man knows his lore. 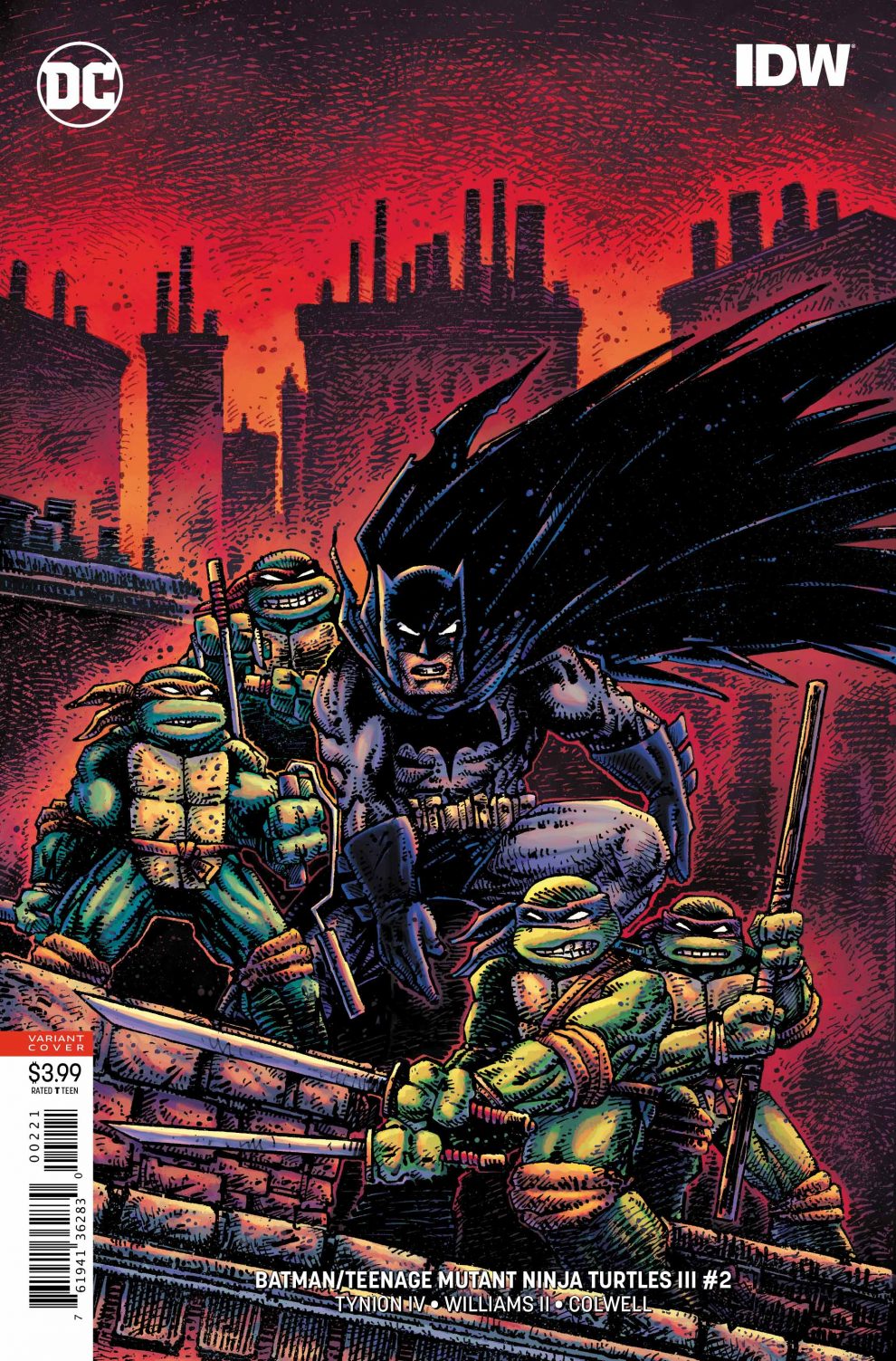 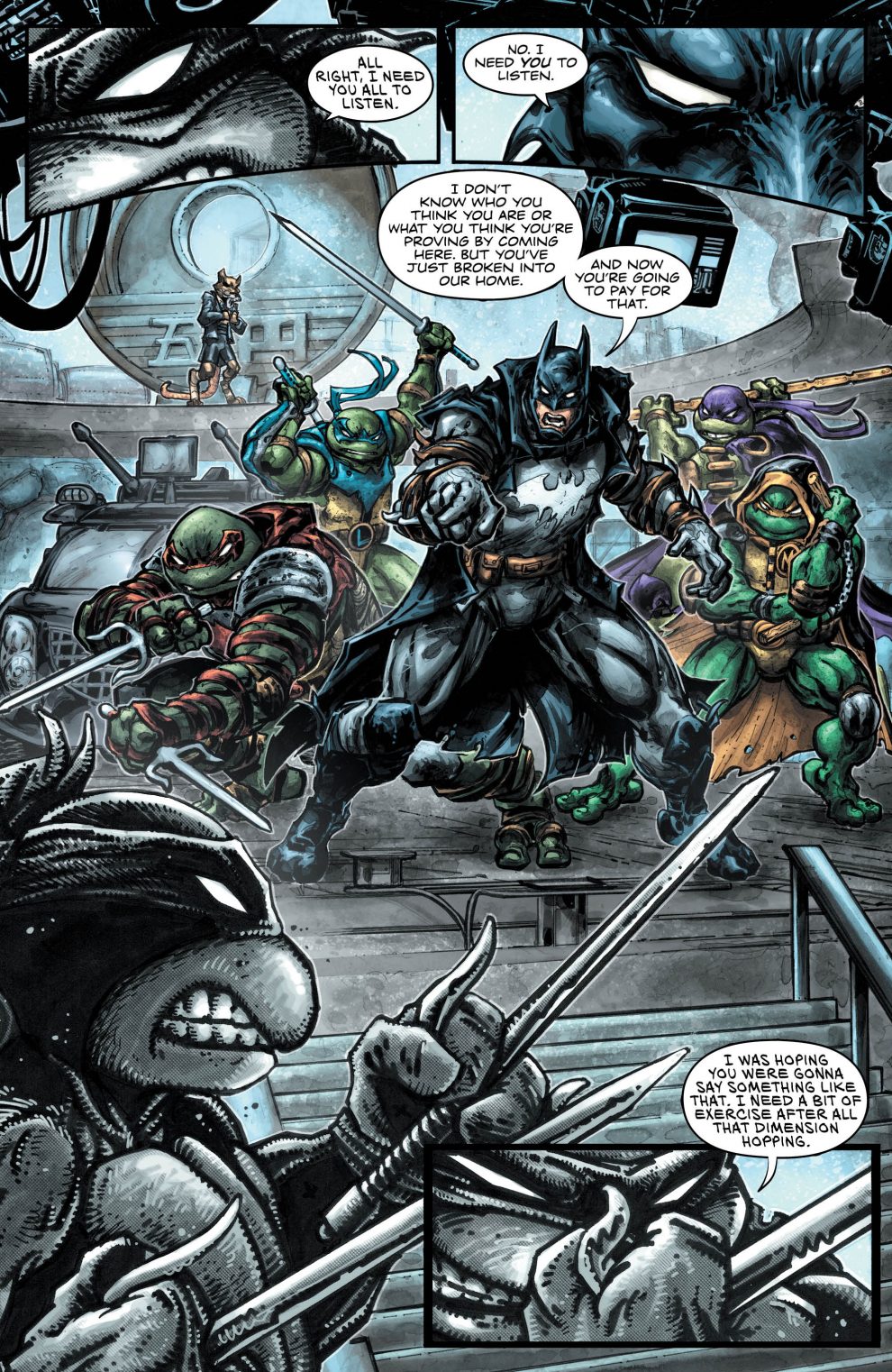 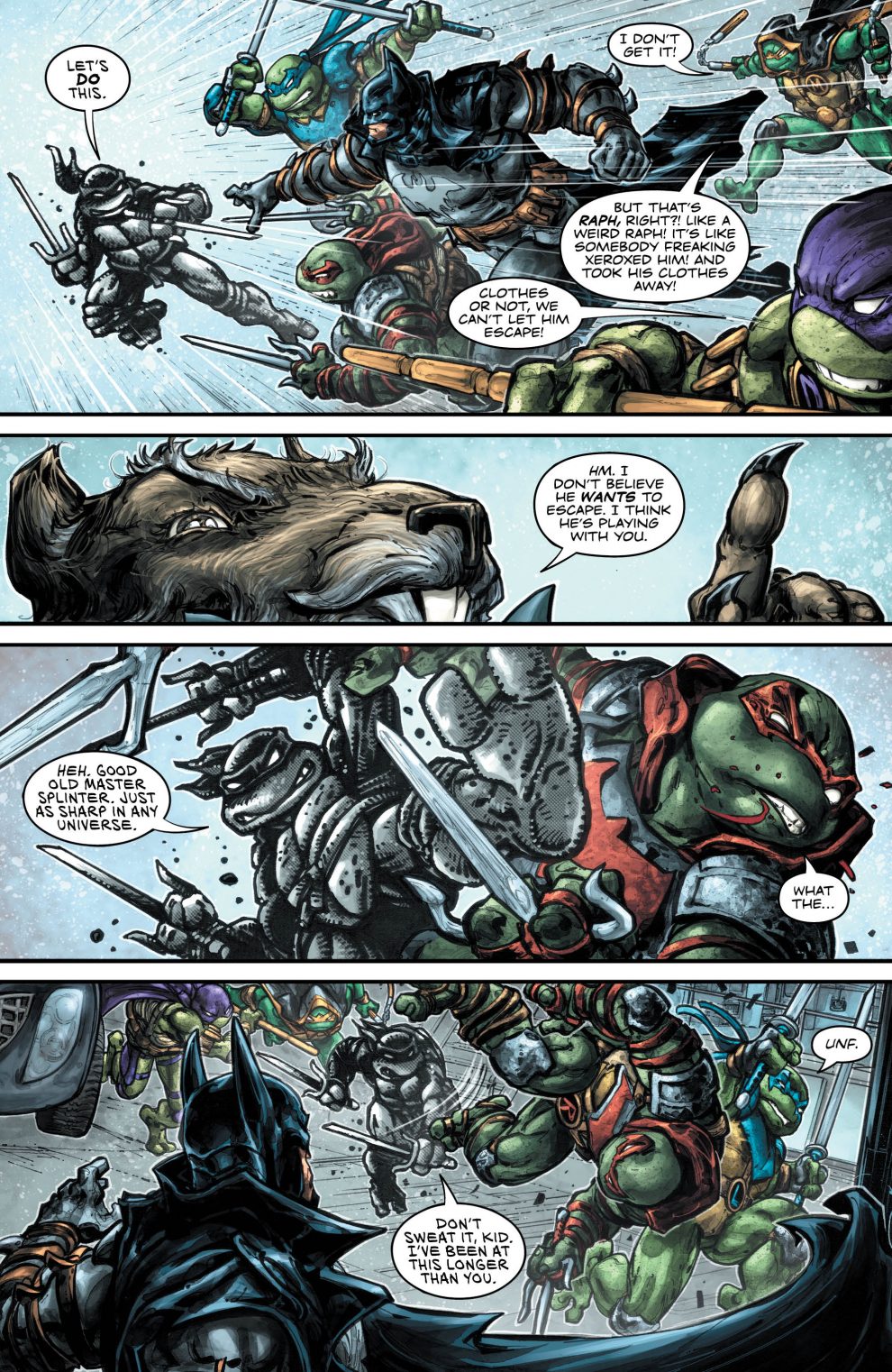 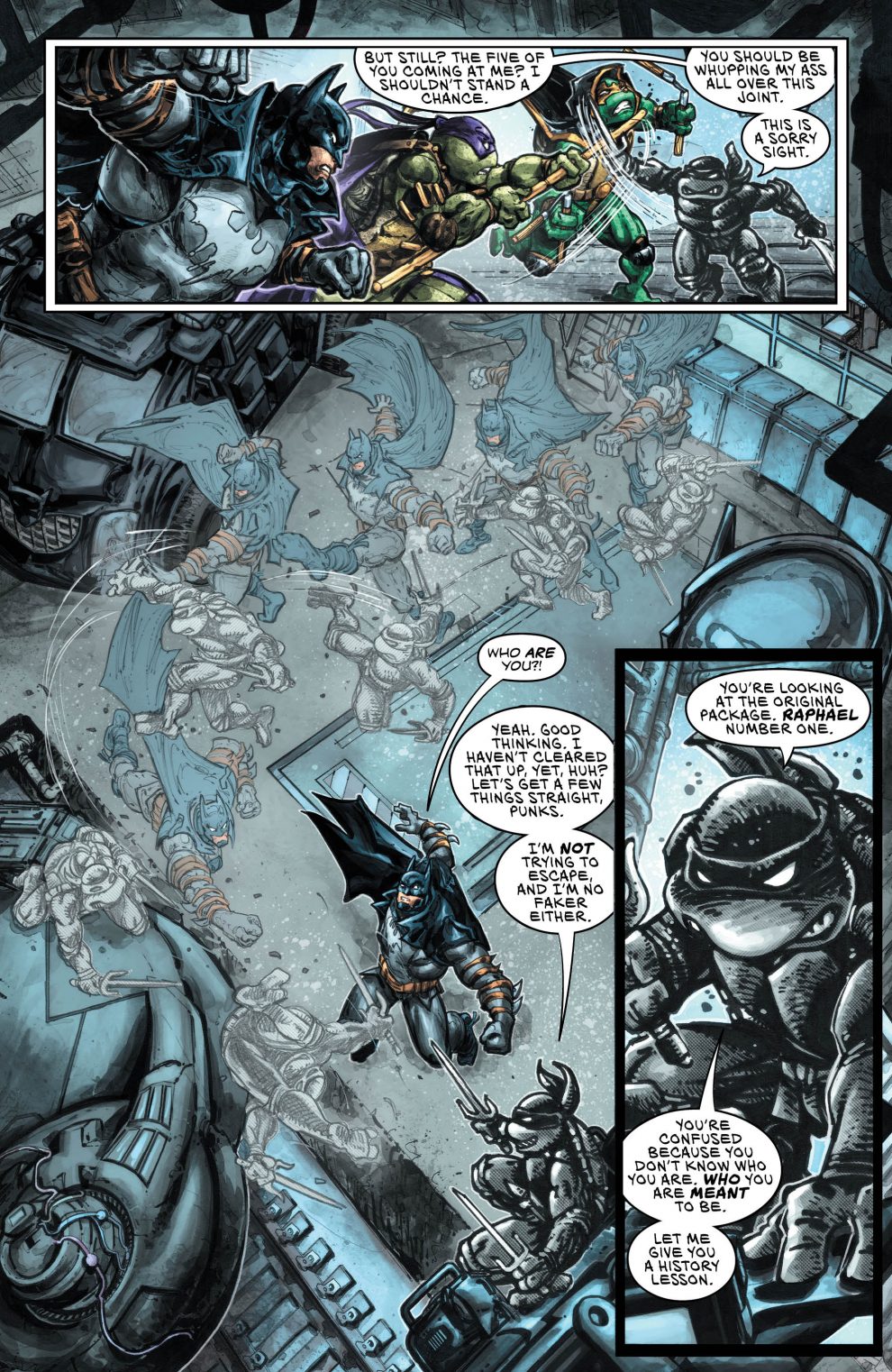 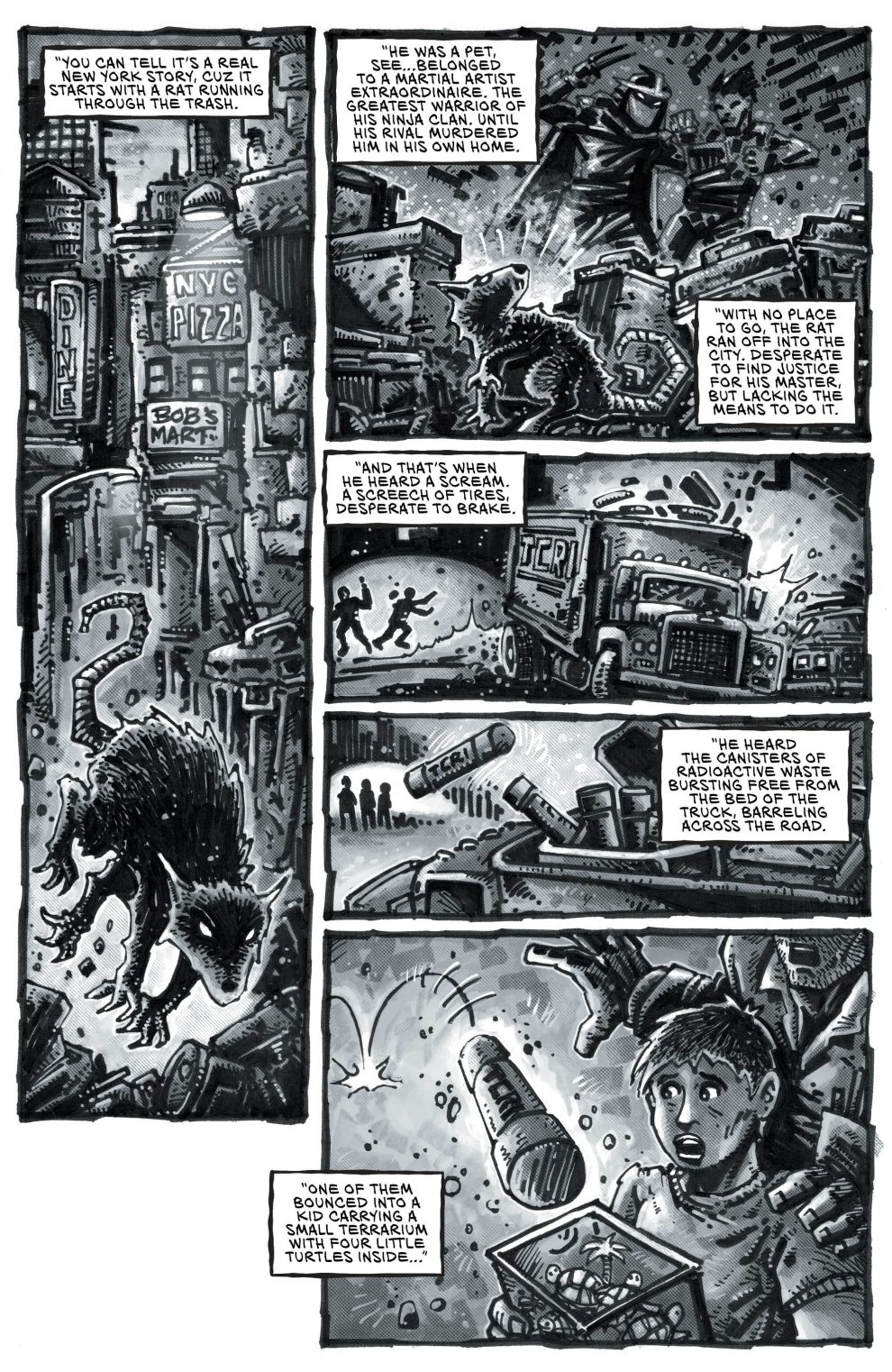 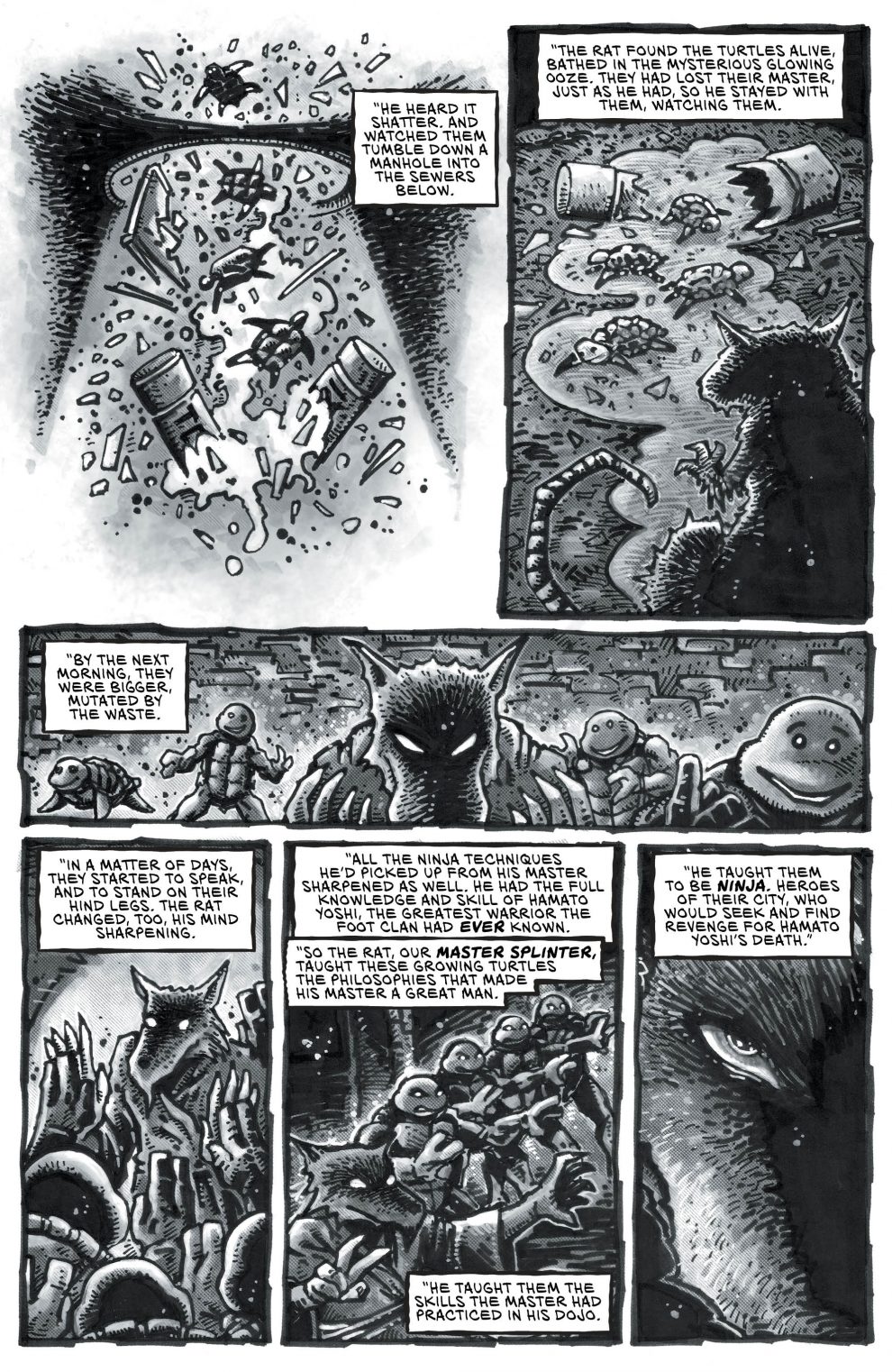 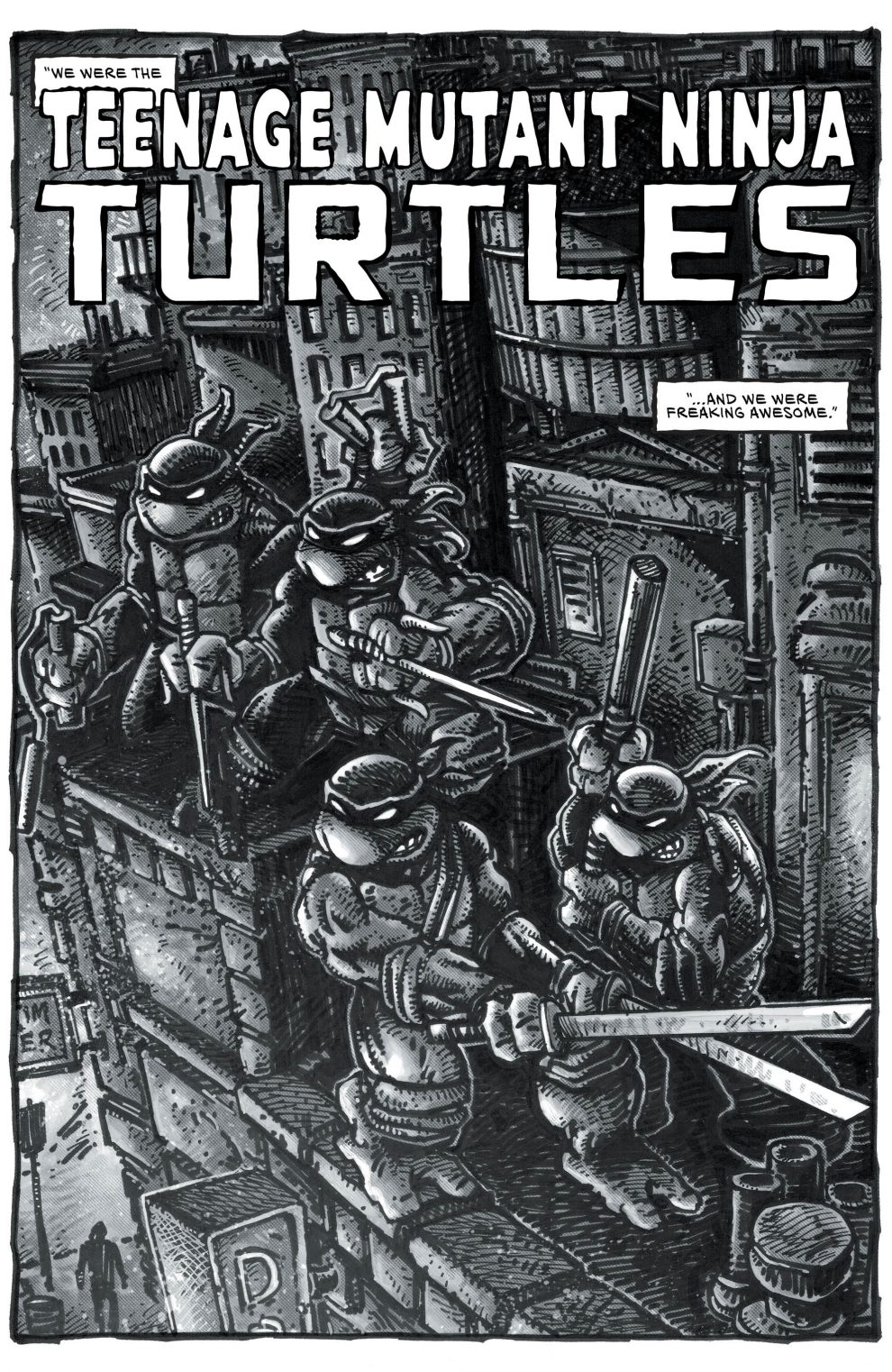 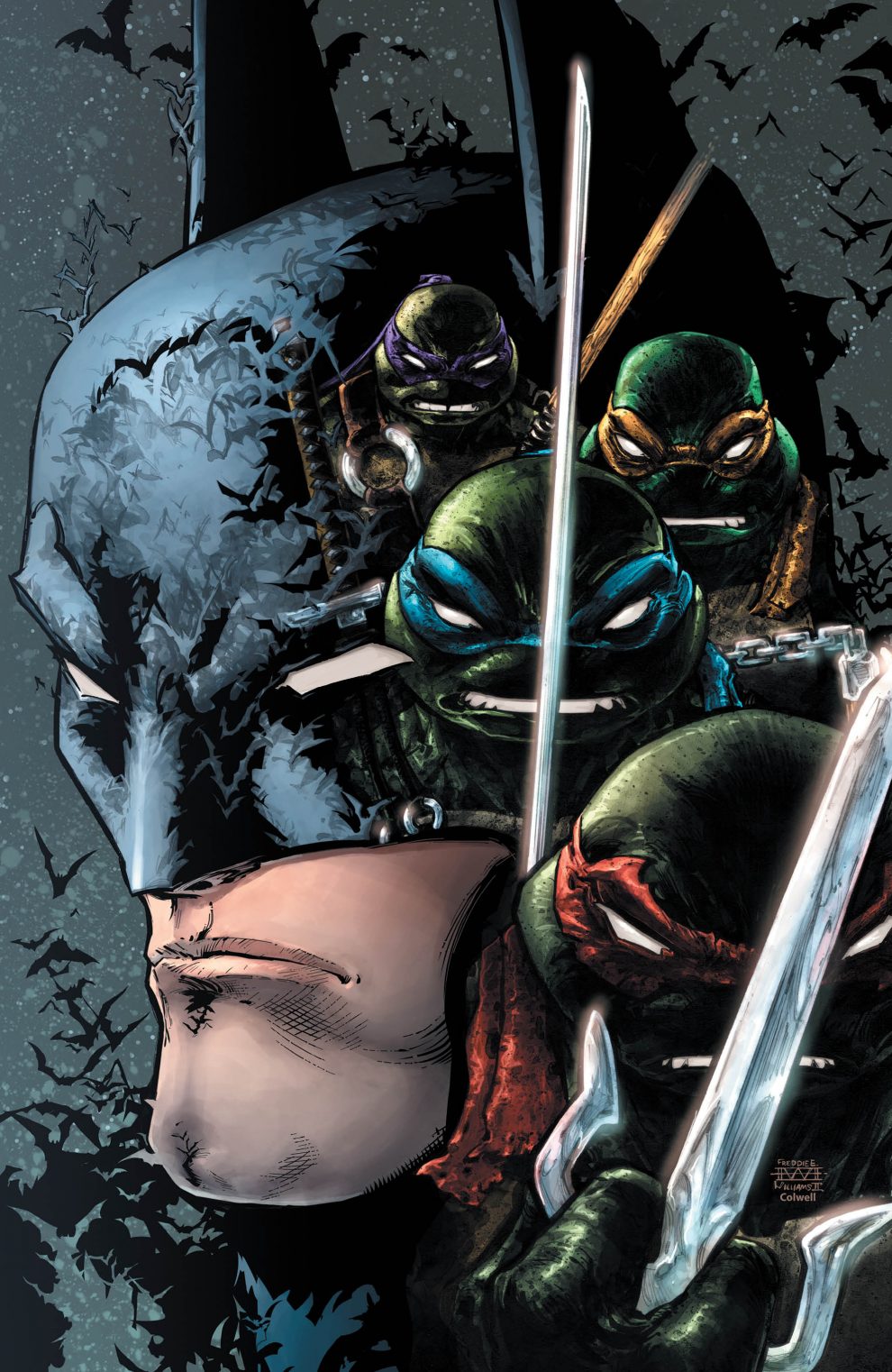 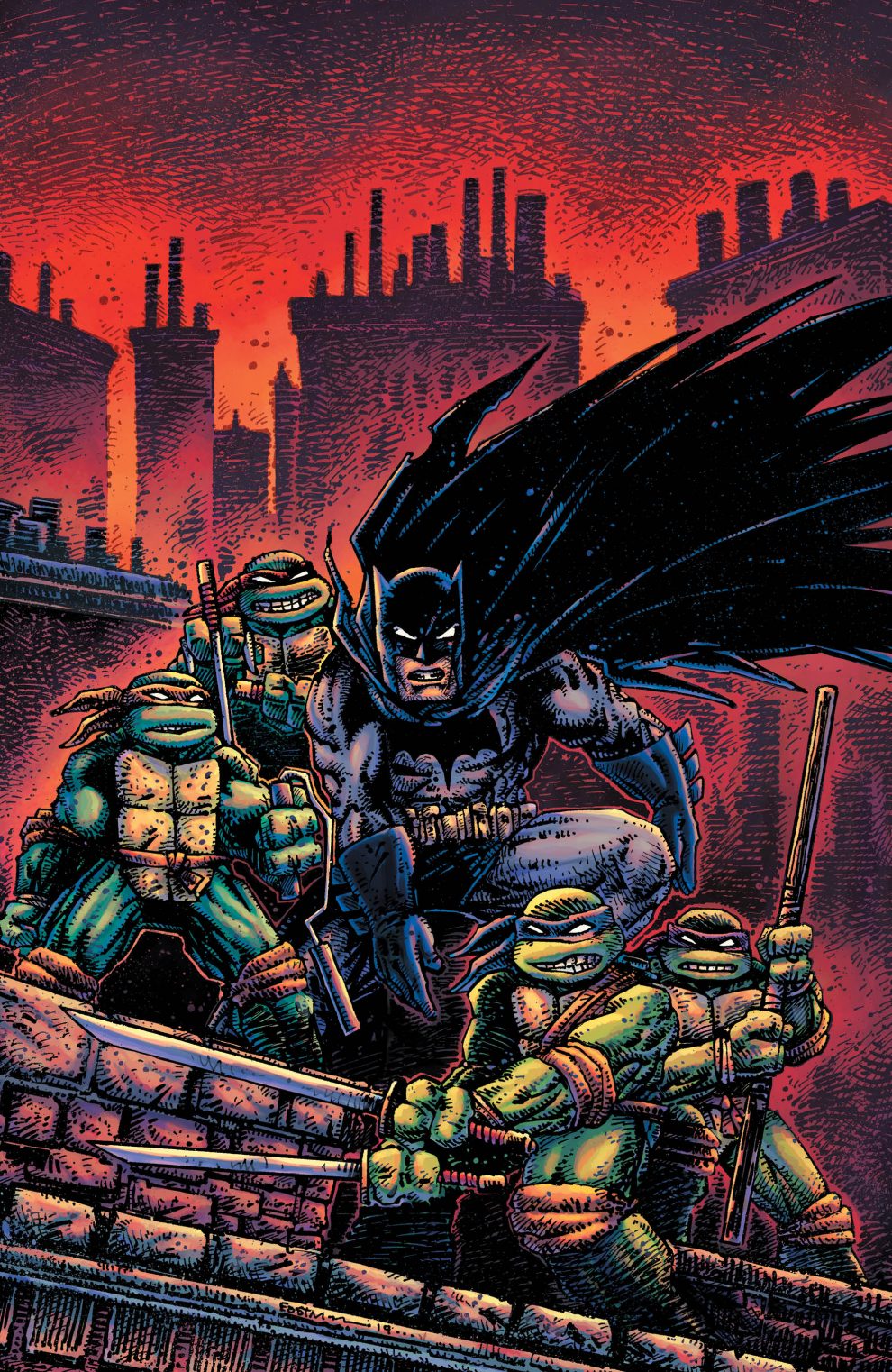 Last time all we got from Kevin Eastman was an alternate cover and a vintage B&W Raphael. This month the original Turtles artist, and co-creator, goes nuts. It is beautiful.
The way that Freddie Williams and Kevin Eastman, despite their different styles (and the fact that one is drawing purely in monochrome while the rest of the art is in full-color) adds to the brilliance, fun and insanity of the tale. Color artist Jeremy Colwell handles this task, which cannot be an easy one, like a master. I’m absolutely loving what the entire creative team is doing here.
Oh, I have to include Tom “Classic Calligraphy” Napolitano in this. Don’t think that I didn’t notice that the B&W Raphael’s dialogue is written in a completely different style to everyone else in the book. When retro-Raph speaks – and throughout his whole flashback sequence – his word balloons have the same texture and feel of the old hand-lettered Turtles comics of the mid 1980s. Bravo, Mr. Napolitano… bravo.

There’re plenty of dark, psychological and thought provoking comics material out there, and DC makes some of the very best. Then we get titles like Young Justice, Teen Titans and Wonder Twins which are just pure entertainment, and huge fun to read. Now we have Batman/Teenage Mutant Ninja Turtles III#2, which contains all the joy, but combined with the coolest history lesson ever. Don’t misunderstand me; I believe that everyone who reads this series will love it, but to an aging comics nerd who loves this medium the way that I do, this title is a wonderful gift.