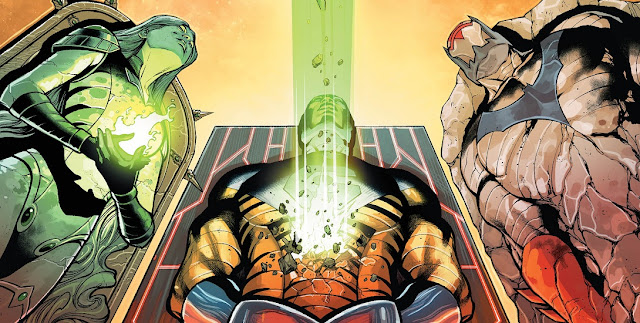 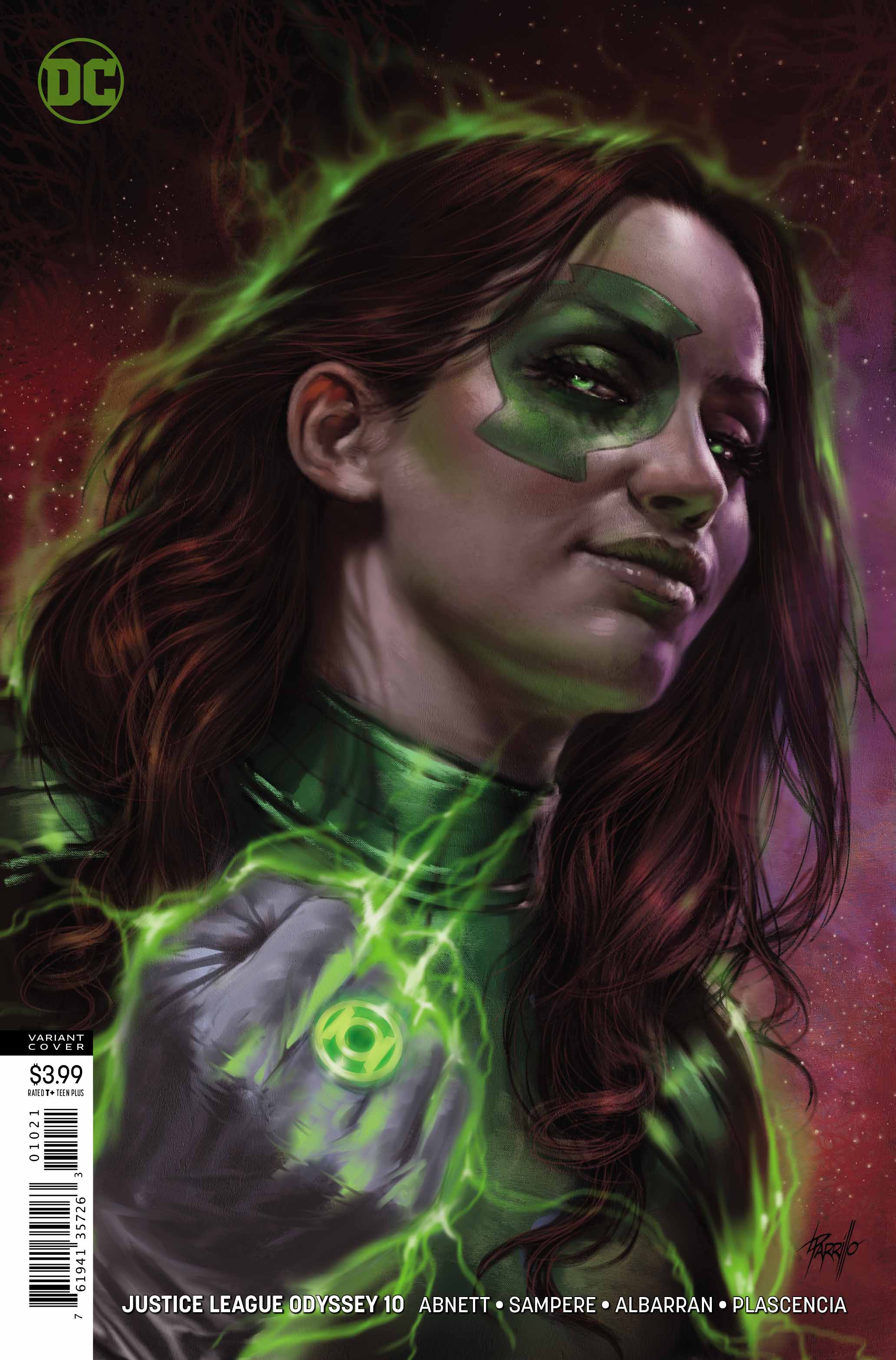 Justice League Odyssey #10 is a wonderful piece of art. Start to finish we are taken on an action packed journey with each page as beautiful as the last. You rarely get a chance to take a breath this month with all 21 pages packed to the brim with action and adventure.


Recruited by Darkseid, our heroes decide to pair up. Cyborg and Starfire are boom tubing from world to world. Azrael and Jessica Cruz are our other pair who, by means of a spaceship, are also on the hunt for ancient Apokoliptian relics to help create Sepulkore to save the multiverse.
That sounds like a very simple storyline, which it is. I think that’s why it works so well. Previous issues have been layered with multiple stories and narrative which could, at times, make you lose track of what was actually going on.
The story in this issue has been written incredibly well by Dan Abnett, who took over writing duties from issue #6. Abnett gives us an opening which drops us straight into the action, a middle which brings the characters together and tells the audience exactly what’s going on. We then get a definitive ending to the issue with a cliffhanger that makes you desperate for issue #11. 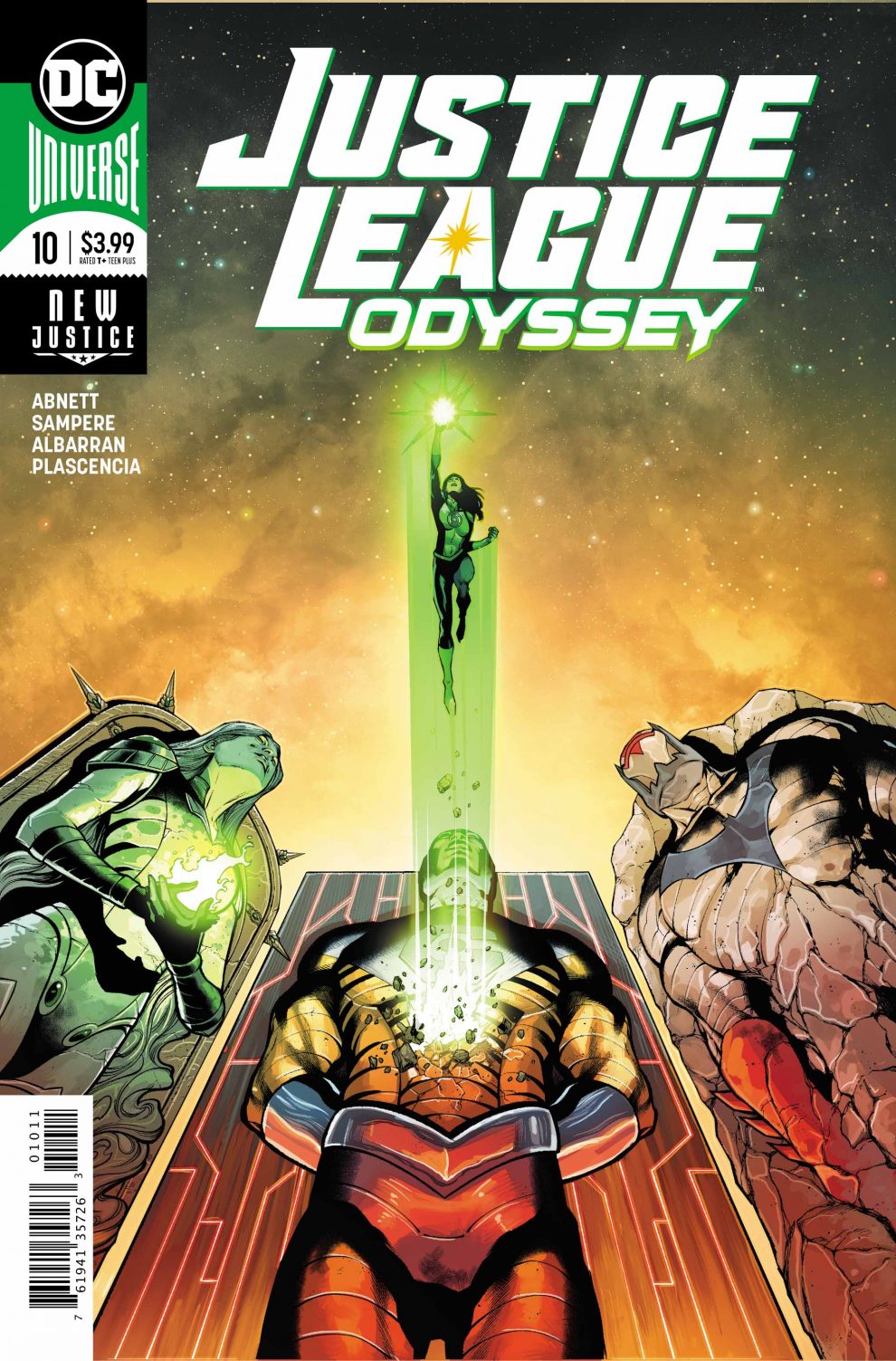 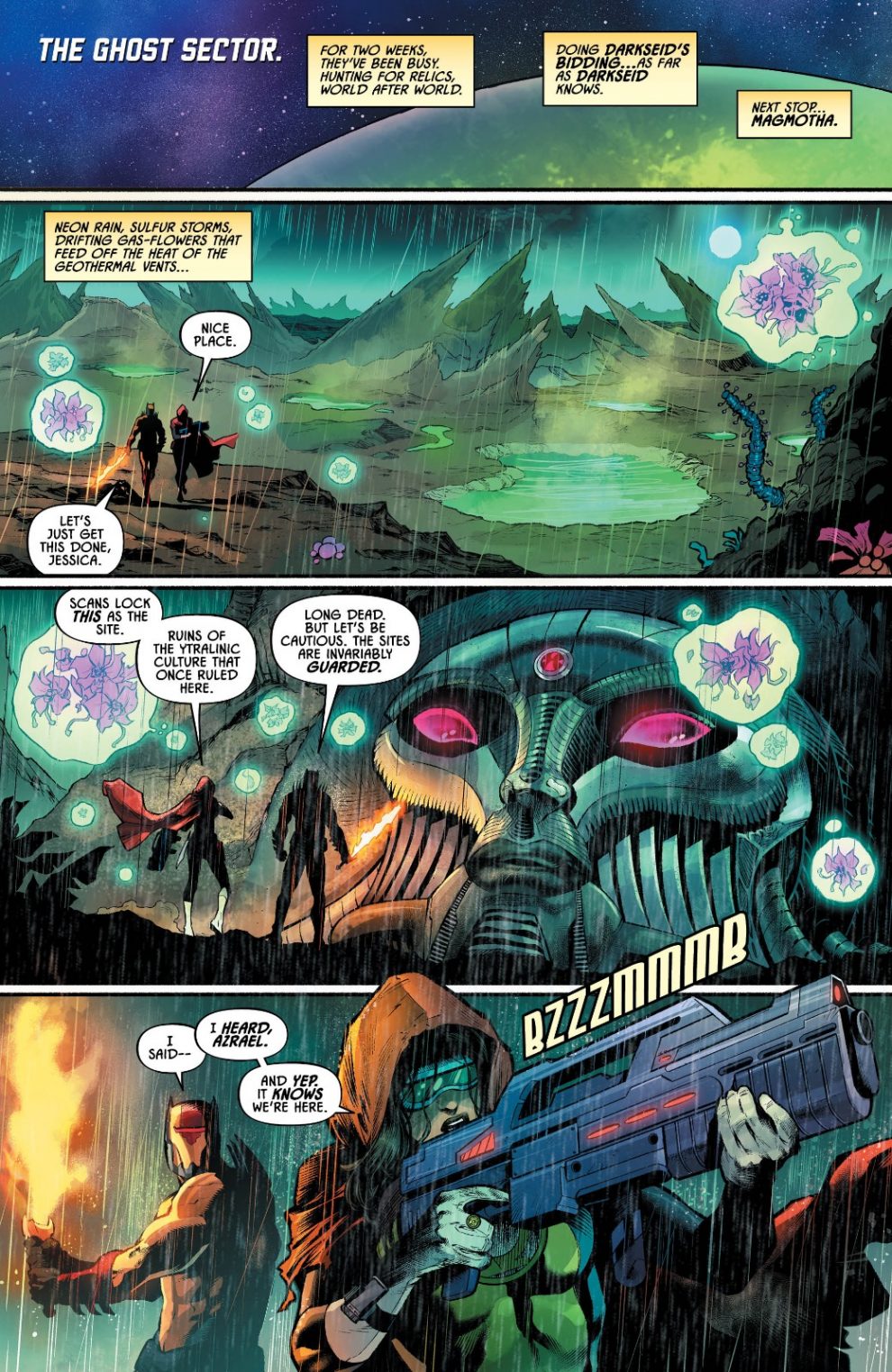 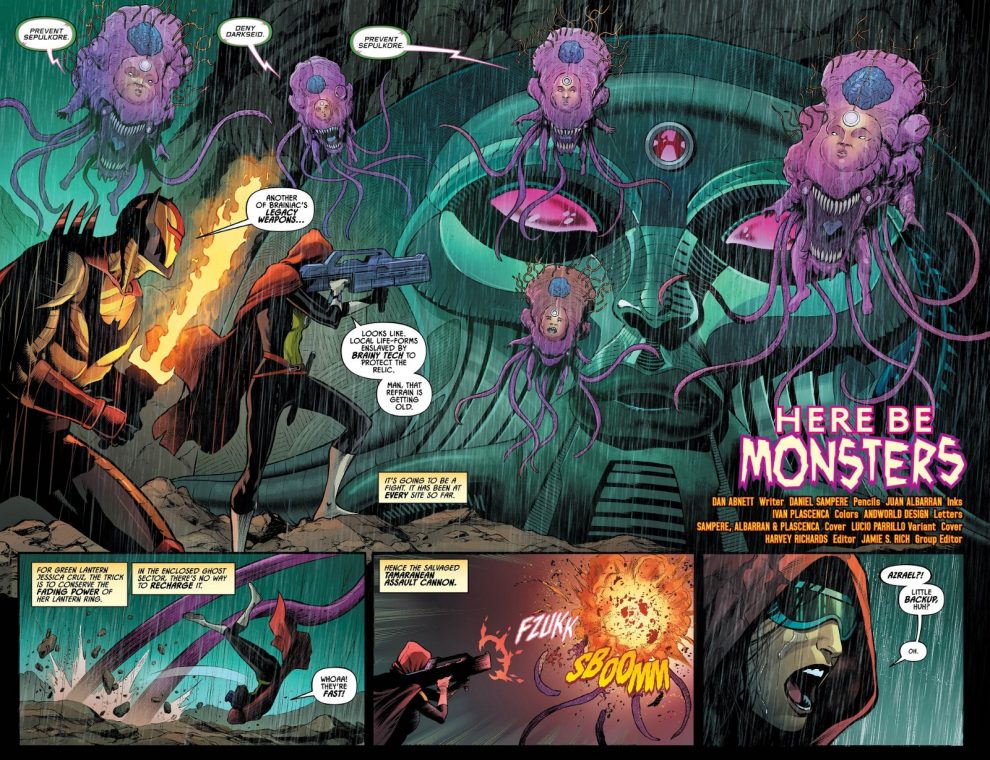 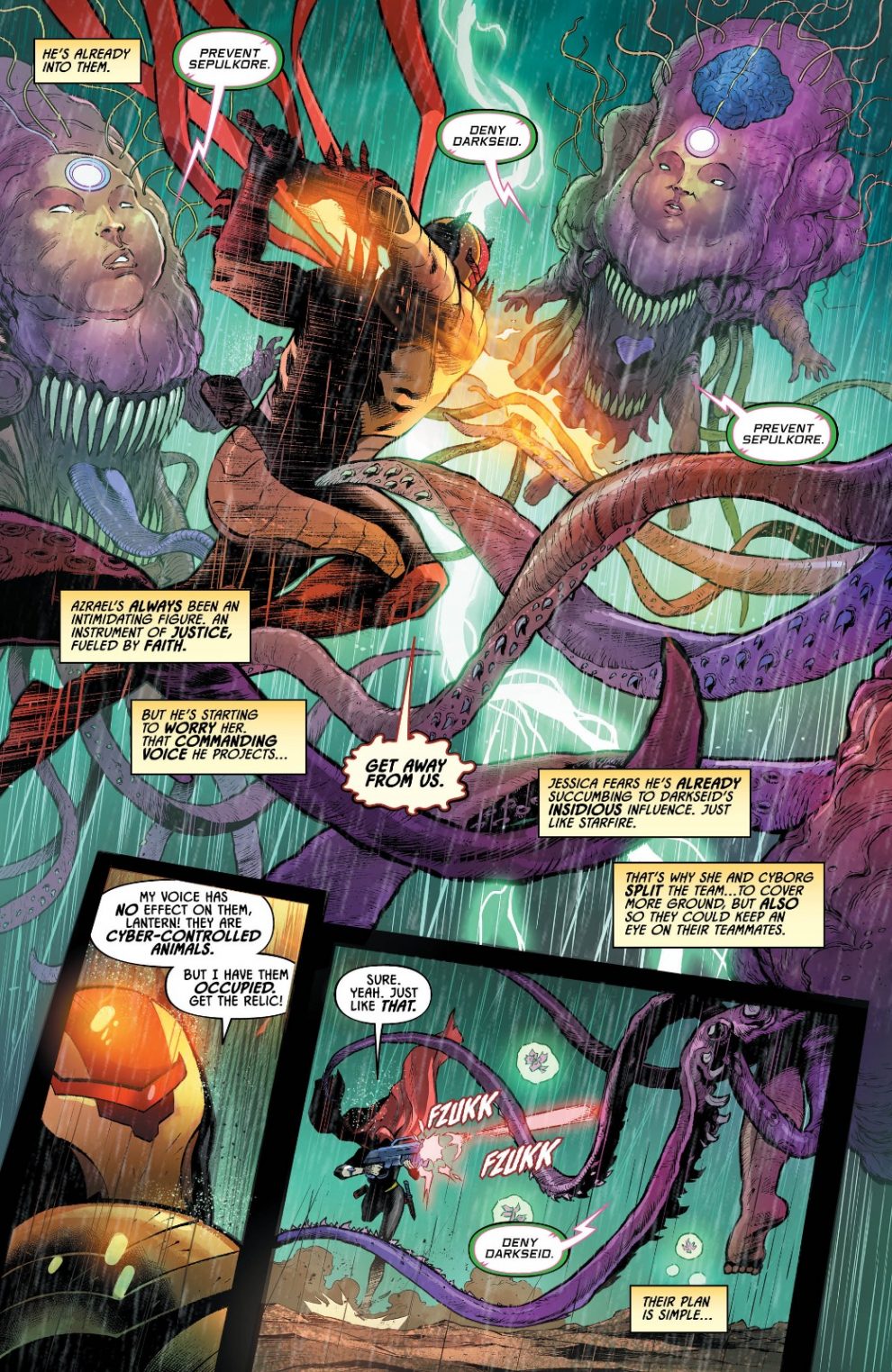 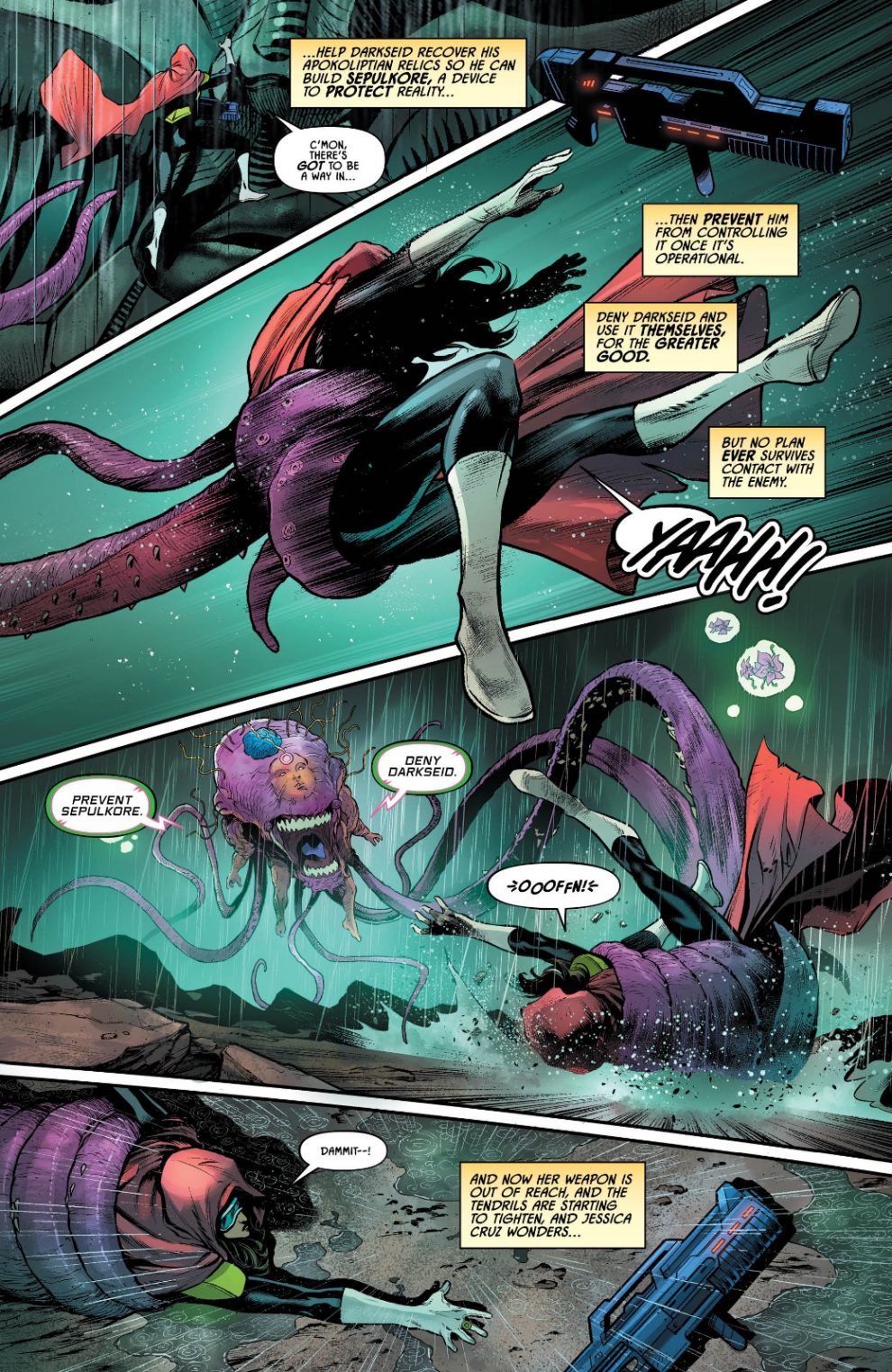 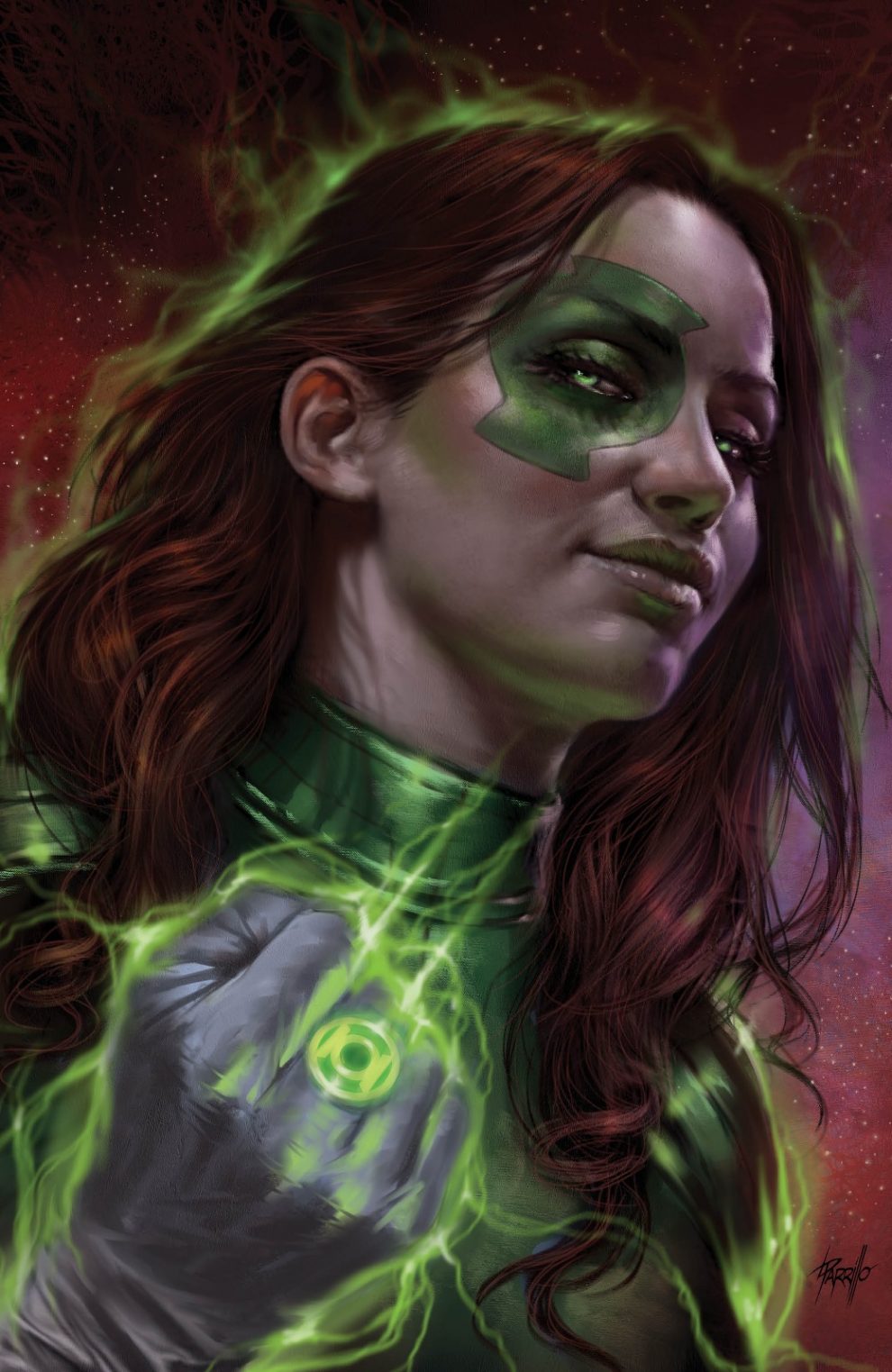 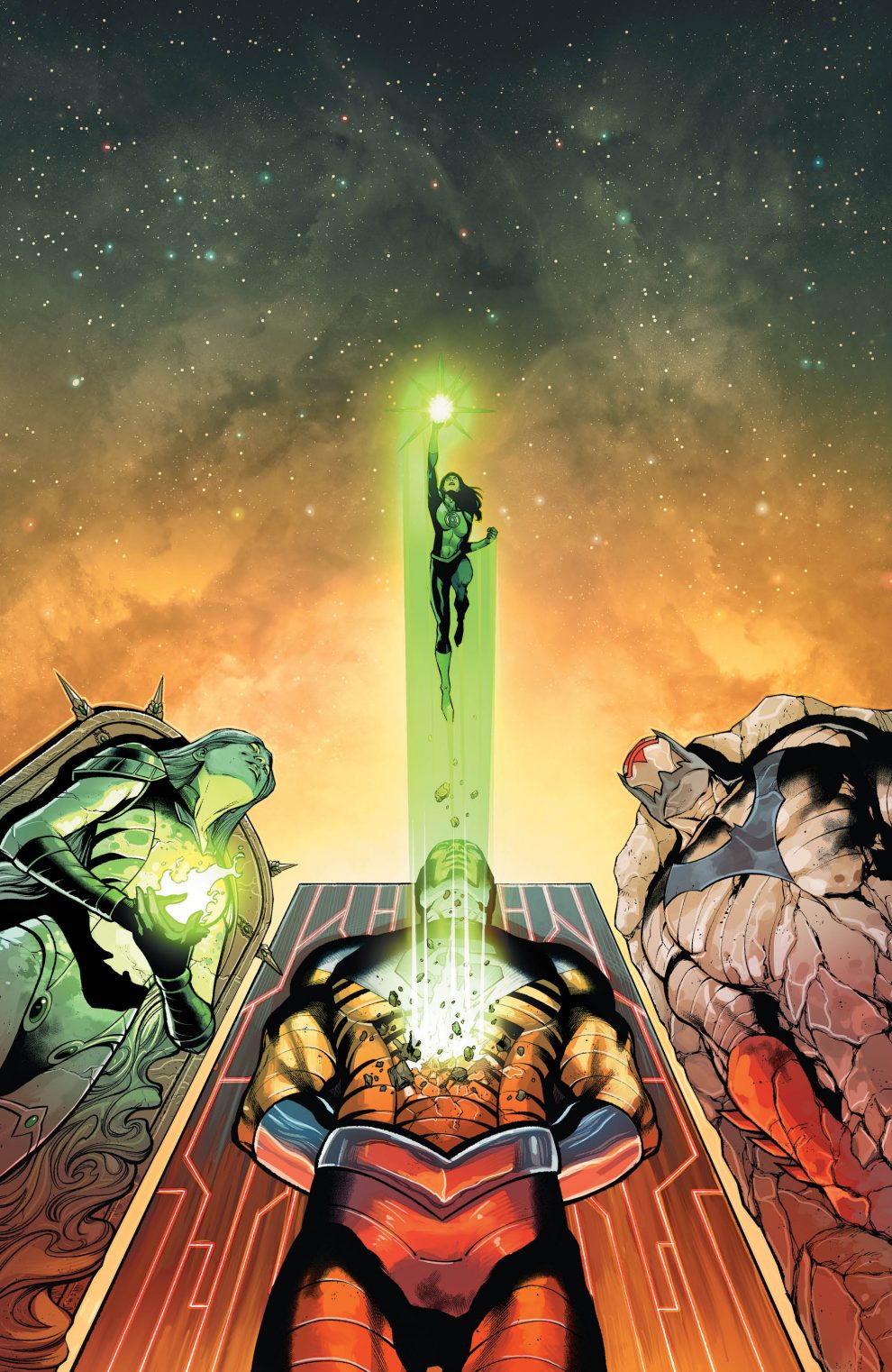 Following her recent outing in the animated movie, Justice League vs. The Fatal Five, Green Lantern Jessica Cruz is slowly becoming a favourite character of mine. She stands out in this episode for me because of the way Dan Abnett deconstructs her by taking away her power ring. Seeing her stuck on an alien planet with her ring running out of charge, it takes all her strength and skill to keep up with her partner, Azrael.
The moments between the two very different characters stood out to me as a real highlight of the issue. You wouldn’t want to mess with a Green Lantern, but seeing the way she can handle herself without her power proves she can stand on her own two feet when the going gets tough.

Color, So Much Color

Justice League Odyssey is finally starting to come into its own delivering a unique, compelling story. A huge part of the identity for this book is the wonderful art and color. The combination of Daniel Samperes pencils, Juan Albarrans inks and Ivan Plascencia’s color from issue 8 has been fantastic. Sampere is able to pack so much detail into each panel without making the pages feel overloaded. With the contrasts and vibrancy from Albarran and Plascencia, this book now has that modern space adventure feel, comparable to the likes of Marvel’s Thor: Ragnarok or the what we’ve seen from the recent poster for Wonder Woman ’84.

Justice League Odyssey #10 is a wonderful read that feels every part its own individual story, while still being part of a larger world. This proves that a simple tale told well can have a bigger impact than an overly complicated story told badly. After a rocky start this is a book picking up steam. It's such a shame that Dan Abnett, Daniel Sampere, Juan Albarran and Ivan Plascencia couldn't stick around for an extended run.