SUBMITTED FOR YOUR APPROVAL…

The Twilight Zone, a television series that shows no signs of letting up, is still going strong 60 years since it first debuted on CBS in 1959. Created by the already popular writer Rod Serling, the show became a series with an infinite lifespan.

The Twilight Zone is now 60 years young and still has a massive appeal to those who love a bit of twisted, comedic, moralistic and, at times horrifying, science fiction. I have been a fan of this show for many years, from the original to the latest version by Jordan Peele. 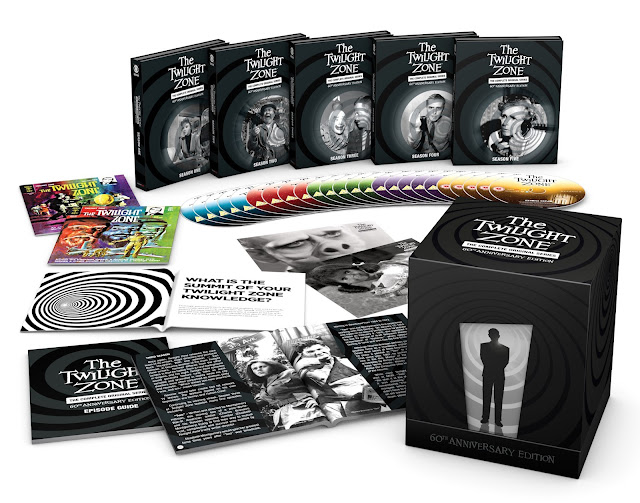 It was probably in the 1980’s that I first came across this show and I was amazed. Back then, just a teenager, I thought black and white shows were old and ‘fuddy duddy’ (as my kids would say nowadays). That was until my late mam (who was always there when I found my love for various things as a youngster) turned on the tv and an episode of the TZ was showing.

I always remember the first episode I saw being "Time Enough At Last" starring the utterly wonderful Burgess Meredith (who went on to make numerous appearances in the show). Well, I was hooked straight away. I knew nothing of the series, but seeing the twist of joy being turned to despair drew me in. It was like nothing I’d seen before and I’ve loved it ever since, including the 80’s, early 2000’s and the recent revival. That’s not forgetting the 1983 movie, various comic books and anything else associated with the wonderful show.
Anyway, I digress...

The 60th Anniversary of the original series has now spawned a quite terrific Blu-ray box-set.  Now, I may not have my own copy of this (I have the earlier Blu-ray release) but I am lucky enough to have a friend that has bagged a copy. I was therefore afforded the opportunity to take a look though at what the set contains. It’s impressive stuff.

Not only do we get all the original 156 (yes 156) episodes, over 5 seasons, of this wonderful show – no, there's also a wealth of wonderful extras. Most of these can be found on the Blu-ray box-set released in 2012 and believe me, there is a reason that this set won awards for the features contained within. 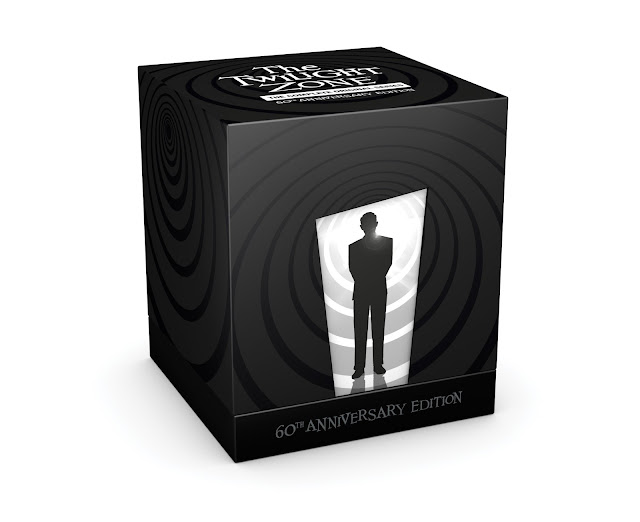 ·         156 episodes of the show
·         Fantastic commentaries
·         Radio dramas starring the likes of Stacey Keach, Michael Rooker, Jim Caviezel Adam West and many more
·         Sponsor billboards (have to admit, I loved watching these)
·         Isolated scores
·         An episode of a 1958 Desilu Playhouse episode called ‘The Time Element@ which is considered to be an unofficial pilot for The Twilight Zone
·         Rod Serling’s network pitches
·         Interviews
·         …and so much more
Adding to all those, the 60th Anniversary box-set also contains a bonus disc with a new biography of Rod Serling entitled "American Masters Presents: Rod Serling - Submitted for Your Approval" and an all new documentary called "Timeless as Infinity: Entering the Twilight Zone." The latter includes interviews with Serling’s family, Wes Craven and Joe Dante and more.

But that still isn’t all!. Apart from the quite excellent lenticular box, included are a 60 page episode guide, an 80 page companion book, 2 postcards and 2 repro Gold Key Comics.

This really is a boxset for the serious collector. It is certainly something that I will buy as soon as I possibly can; I've been lucky enough to have seen first-hand what this set looks like and contains (not sure I’ll be in a rush to give it back).

If you already own the earlier Blu-ray box-set then this may not be for you; if you can live without the ephemera contained within the box, then you already have most of what is contained, bar the bonus disc, that’s why I say that it is for the serious collector. Believe me though, on seeing it myself, I think others would find it difficult to find a reason to say no. It's wonderful.

CASE IN POINT…
There's a reason that this show is a staple in pop culture. Very well written, it took into account social issues of its time, while in the guise of science fiction entertainment. It was beautifully directed, with some outstanding cinematography, and the performances from all the actors involved are still a joy to watch.

Episodes such as "Time Enough at Last", "Nightmare at 20,000 Feet" and "Eye of the Beholder" are all very well known, but throw in all the mini-noirs and the comedic episodes and you have something that anyone can enjoy.

It’s a credit to all involved that this has stood the test of time.
The Twilight Zone 60th Anniversary Blu-ray box-set can be bought through the official website.