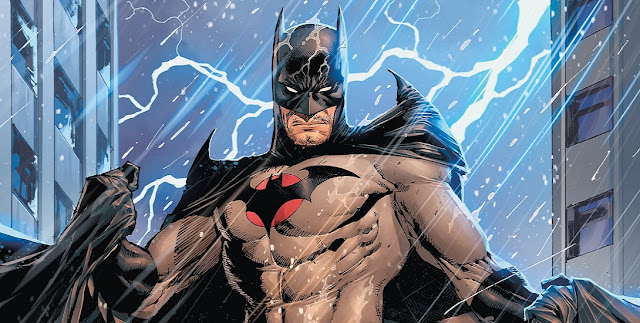 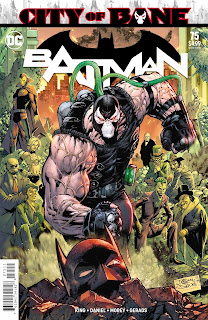 Audacious, brave, redefining and intriguing. Just some of the adjectives that can be used to describe the latest issue of Tom King's epic saga. As we enter the home stretch of his 85 issue run, this 75th instalment really does feel as though the entire story has shifted into something very vibrant and horrifying. As the diabolical collaboration between Bane and Thomas Wayne reaches its endgame, the paradigm shift is huge!

Following the cliffhanger ending of issue #74, the timeline has moved on by an unspecified amount. Sweeping changes have taken place in Gotham City, which has literally been turned upside down. The criminal element have taken the city for themselves in the absence of its Dark Knight protector. A situation so nightmarish that Dr Hugo Strange is the new Police Commissioner, The Riddler and Two Face are buddy-cop partners and Thomas has taken the Bat-mantle for himself. Just read that last sentence back and take it in. This truly is the "City of Bane."

The exchanges between Thomas and his captive, Alfred, are expertly written by King. Laced with barely concealed contempt and menace, Alfred's calm exterior belying his anger. As part of the Bane/Wayne plot, JL rescues are off the menu, due to a freshly conscripted and returning Gotham Girl. With a new look for the character, it very much feels as though she has been given a fresh coat of paint. as one of Bane's key allies, I can't wait to see her interact with a returning Bruce.

Speaking of Bruce, his current whereabouts are extremely interesting, to say the least. No spoilers here, but let's just say he's hit rock bottom, with only a reunion with a certain Ms Kyle there to reignite the fire in his belly. Based on his cold surroundings, a new flame is much needed (courtesy of an old flame).

What really adds to the impact of the book is the stunning artwork. Tony S.Daniel and Mitch Gerads have created pages that simply demand to be viewed, again and again. Their renderings of much loved, iconic characters are vibrant, exciting and striking. Able to make said characters terrifying, whilst attractive at the same time, the imagery literally pops off the page. I defy anybody to find an interpretation of Thomas Wayne's Batman that captivates on the same level. Truly outstanding stuff.

With the currently ubiquitous Lex Luthor making his expected appearance at the end, DC haven't forgotten to tie this book into the bigger continuity. The alst few pages are tantalising and whet the appetite for what is to come, both in terms of the book and the overall DC universe. Bring it on!

Batman #75 is a book that serves as the start of something new, yet also feels like the beginning of the end, as King's labyrinth of an arc is slowly, but surely reaching its conclusion. All bets are off regarding the end, and how it will play out.Overall, this issue is a must read, as it rewards fans for their patience and investment and all the pieces are now in place for fireworks. I have always enjoyed King's arc, and applaud the long term thinking in place. Let's all get ready for the final issues, which I feel will go down in history as some of the best Batman material that has ever seen print.