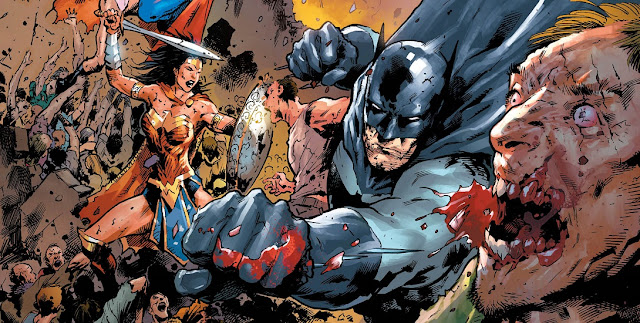 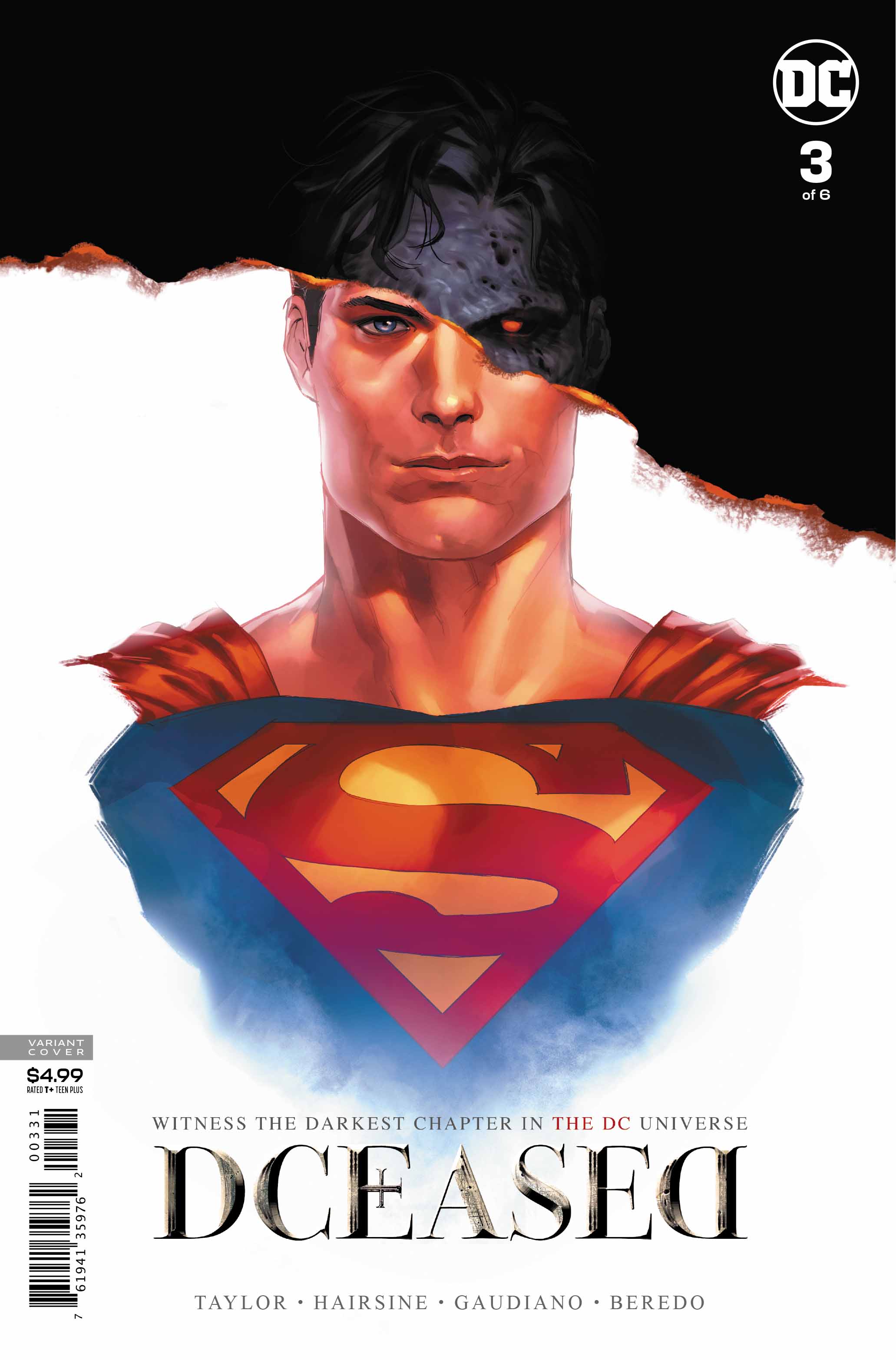 DCeased #3 may be an action/adventure comic, but the emotional responses it provokes are heartbreaking. The world has been overrun by the anti-life equation. All over the globe the surviving superheroes have to deal with swarms of ravenous undead. It’s one thing seeing our favorite characters take out hordes of un-named zombies, but seeing them dealing with friends and loved ones who have also turned is harrowing. I can’t remember the last time a comics series both thrilled me and kicked me straight in the feels as much as this one does.
Tom Taylor, you are one dark, twisted, sick man… keep up the great work.
Last month‘s issue saw Alfred dealing with the infected Batman, Nightwing and Red Robin, in a scene which ripped my heart in two. His reaction and actions at the beginning of this issue are both fitting and mind-blowing. I always knew that he was badass, but never has he been moreso than in this incredible issue.
Seeing Superman vulnerable, not physically, but emotionally, is one of Tom Taylor’s greatest achievements in this series. I urge every DC Comics fan who hasn’t read DCeased to pick up all three issues to see what I’m talking about. The anti-life infection has spread everywhere, from the offices of the Daily Planet, to the fields of Smallville. Ponder on that for a moment, if you will. 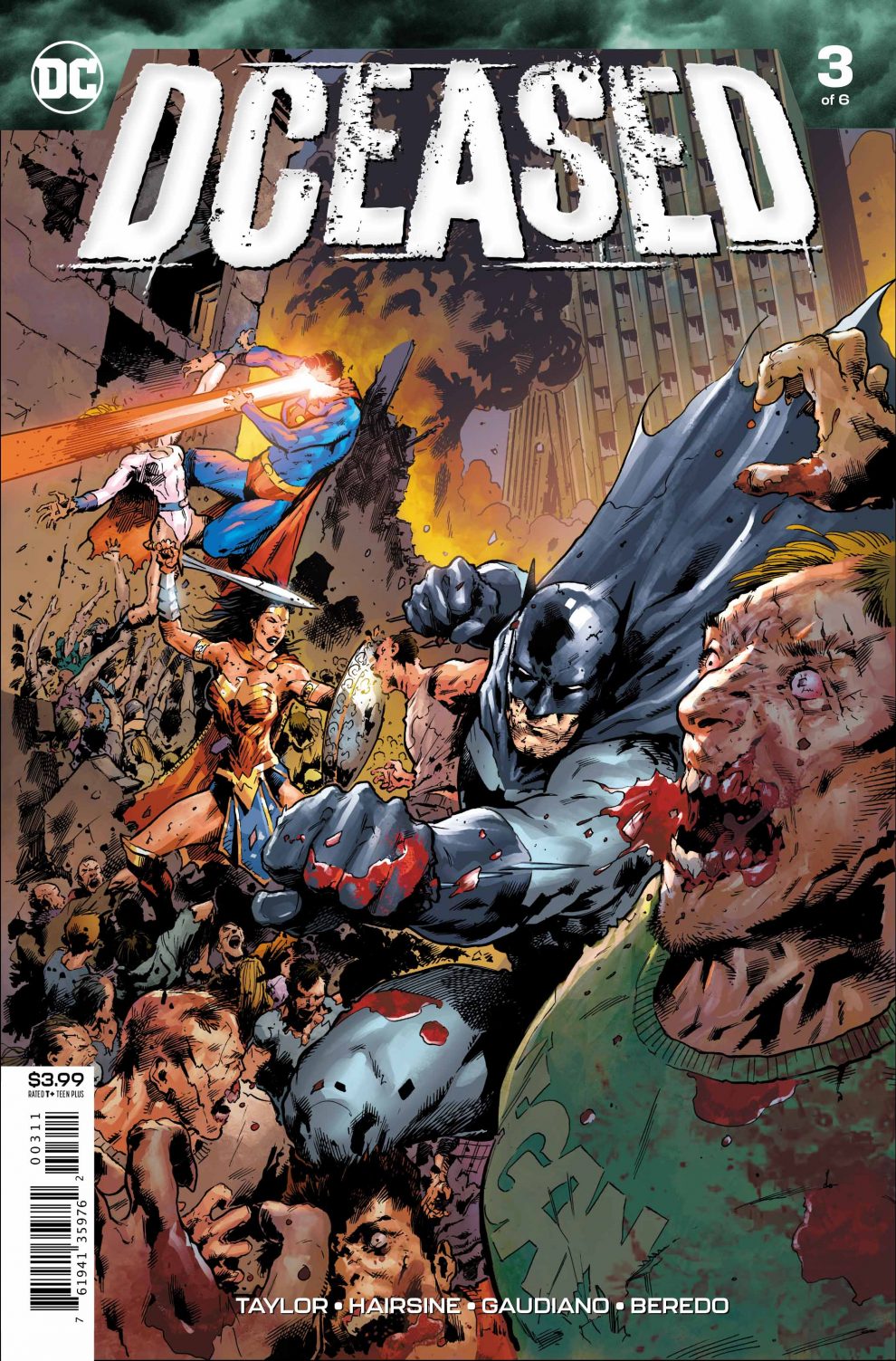 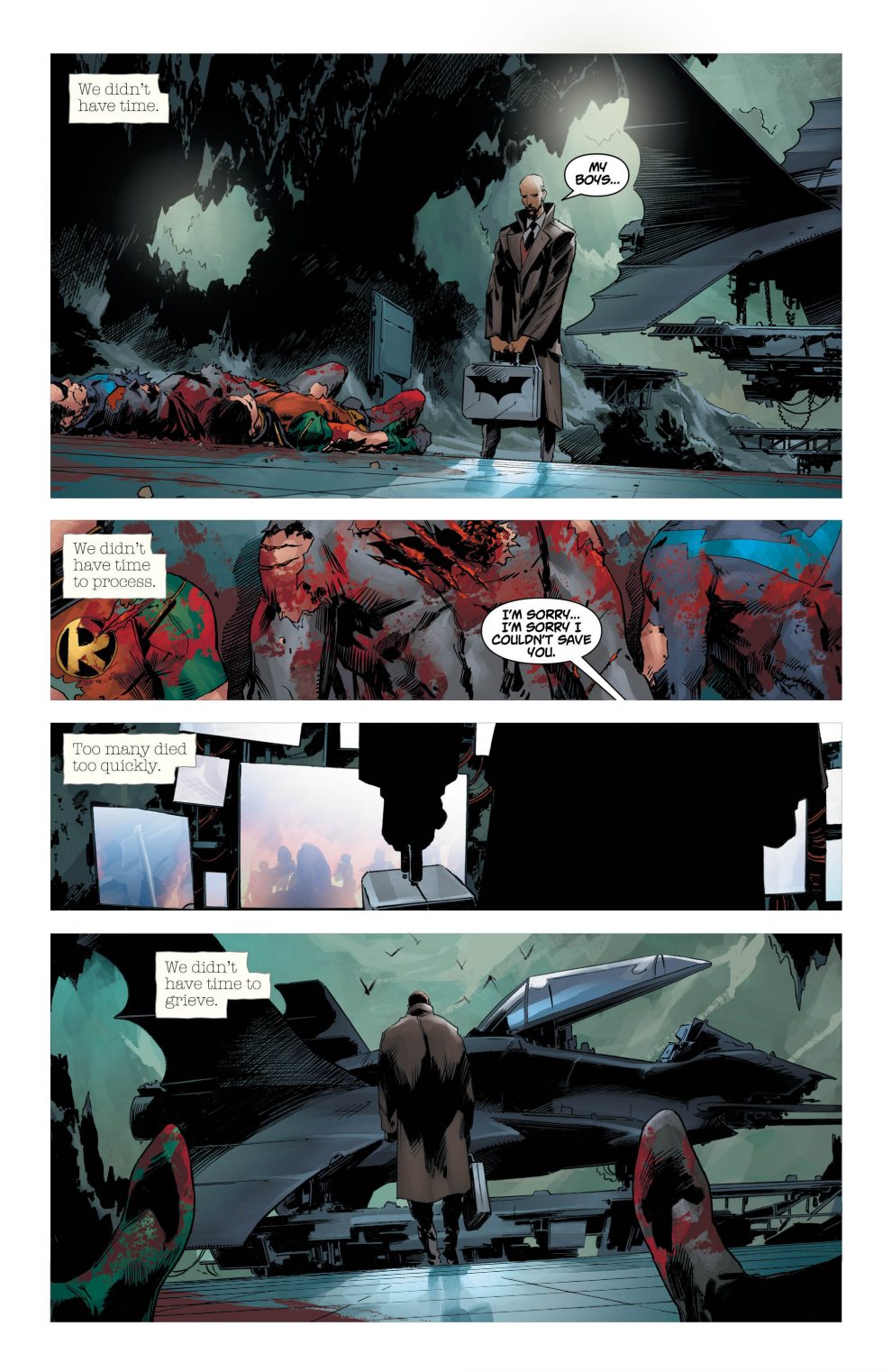 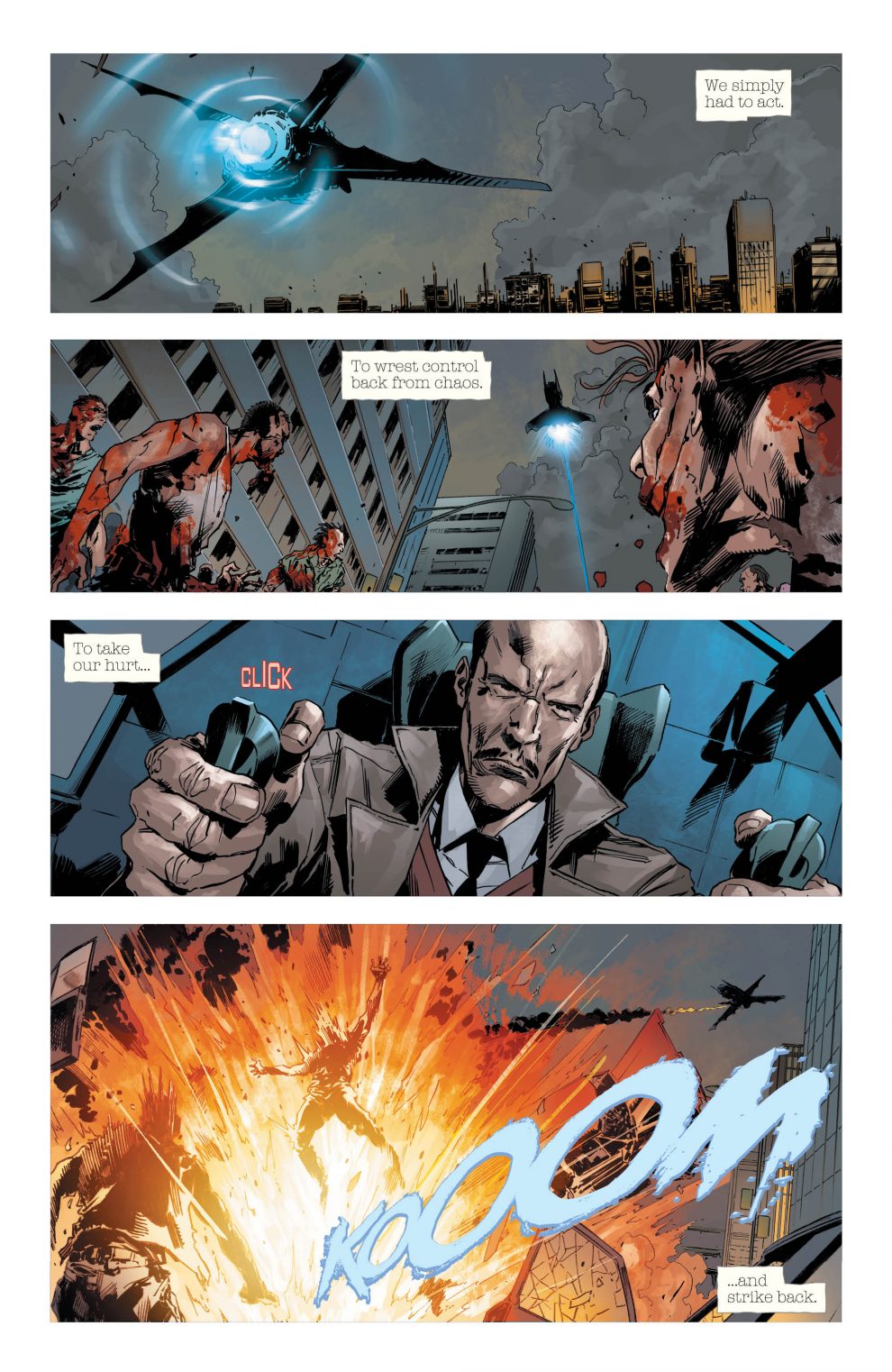 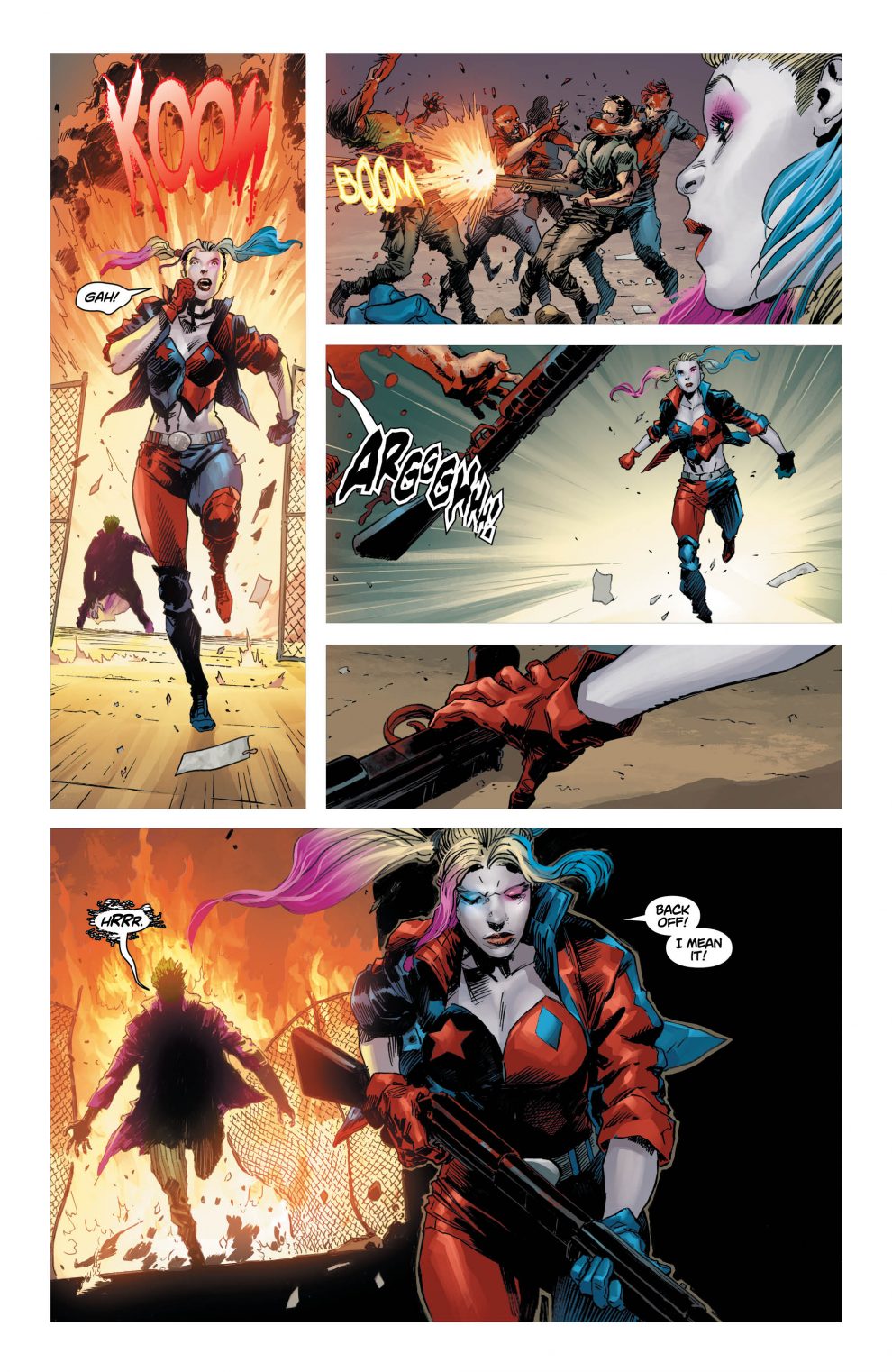 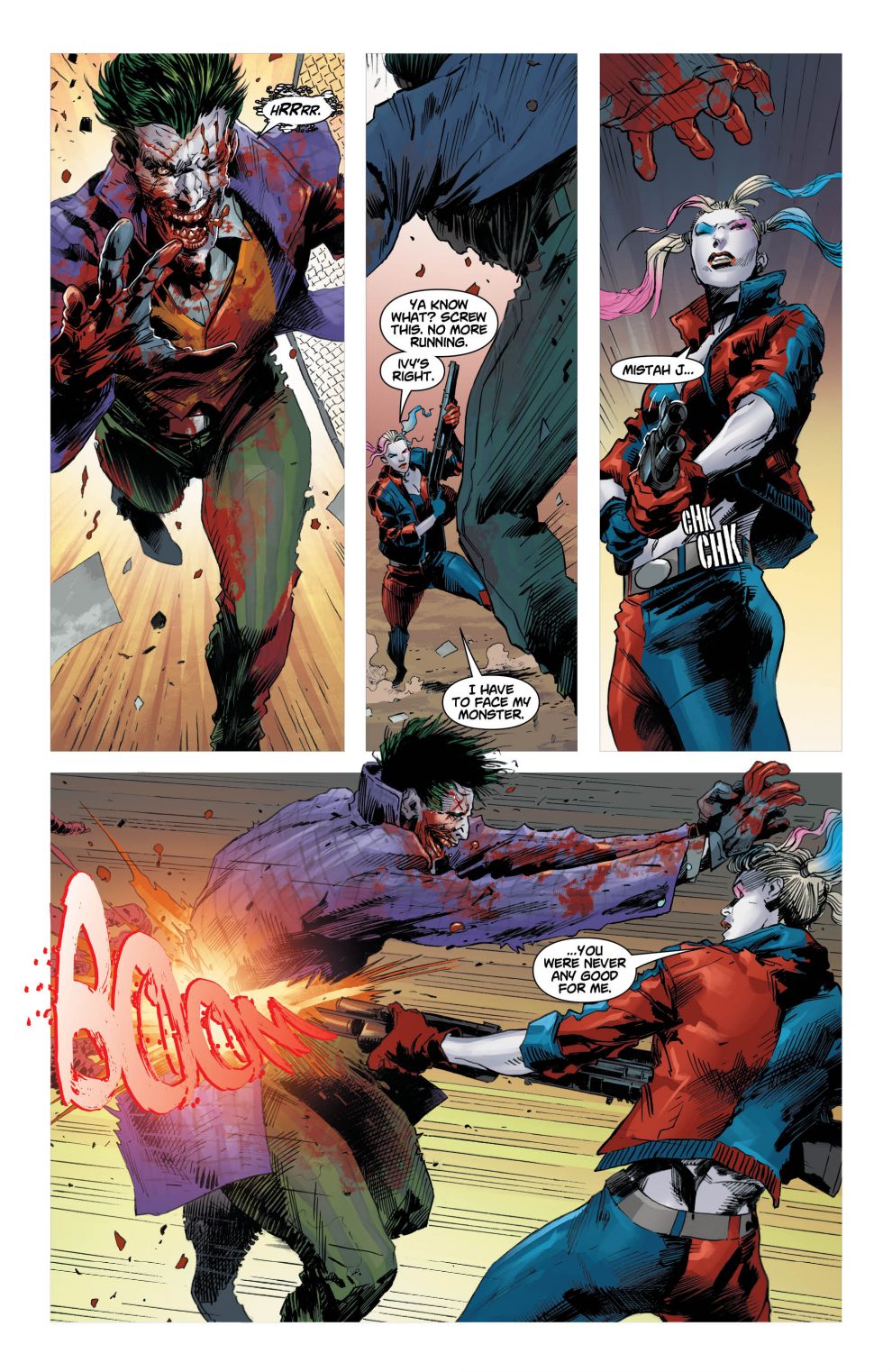 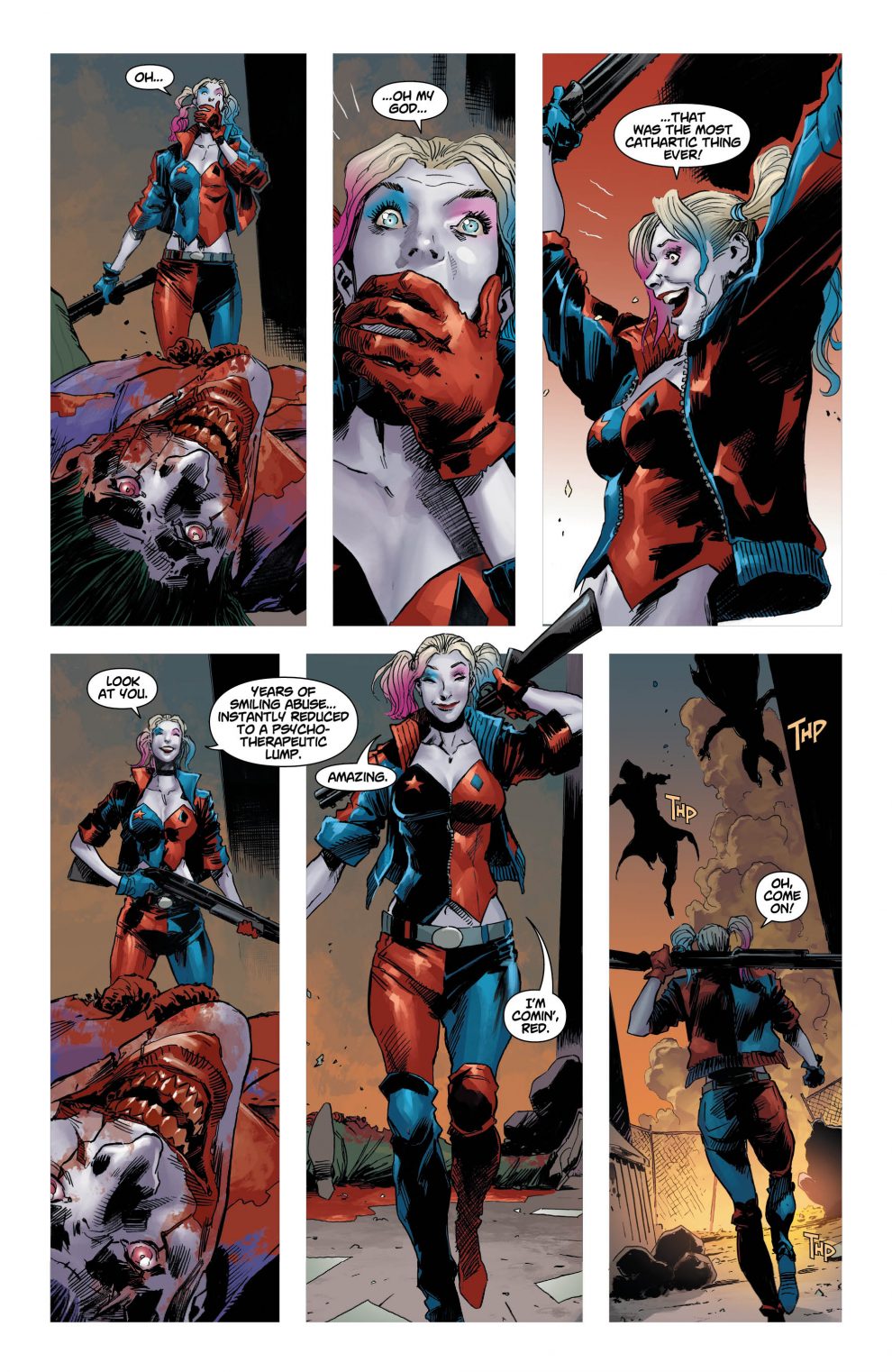 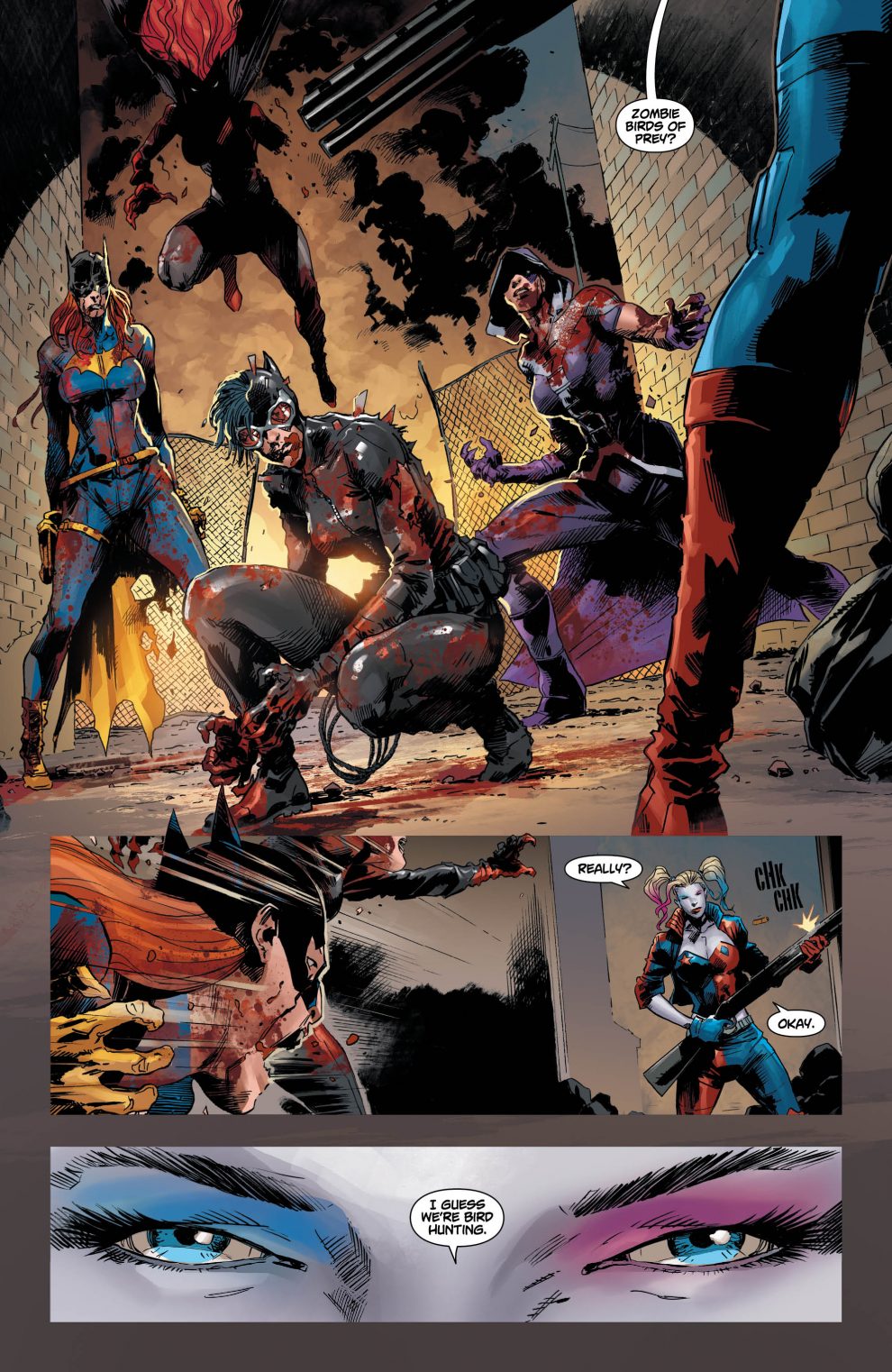 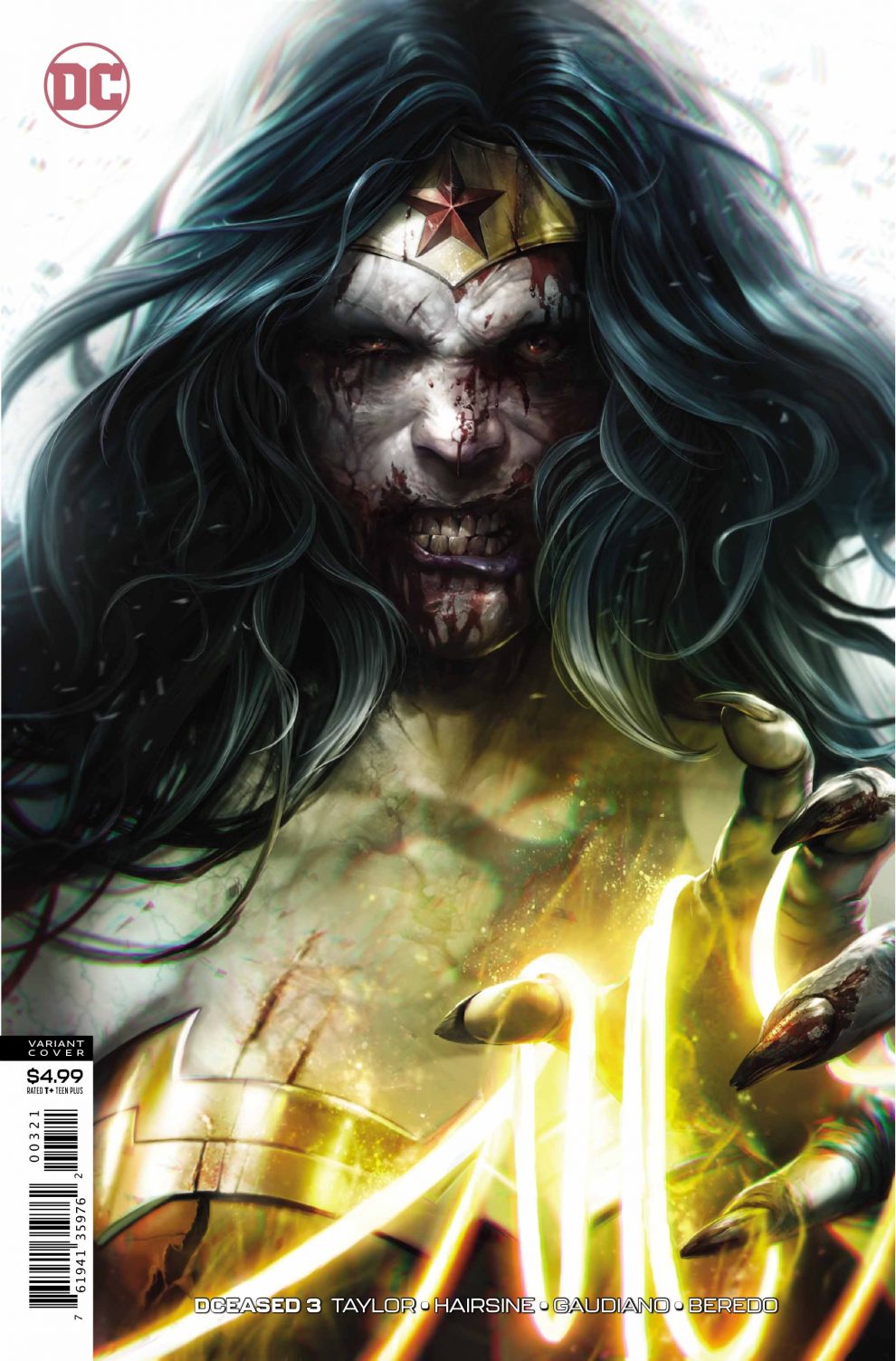 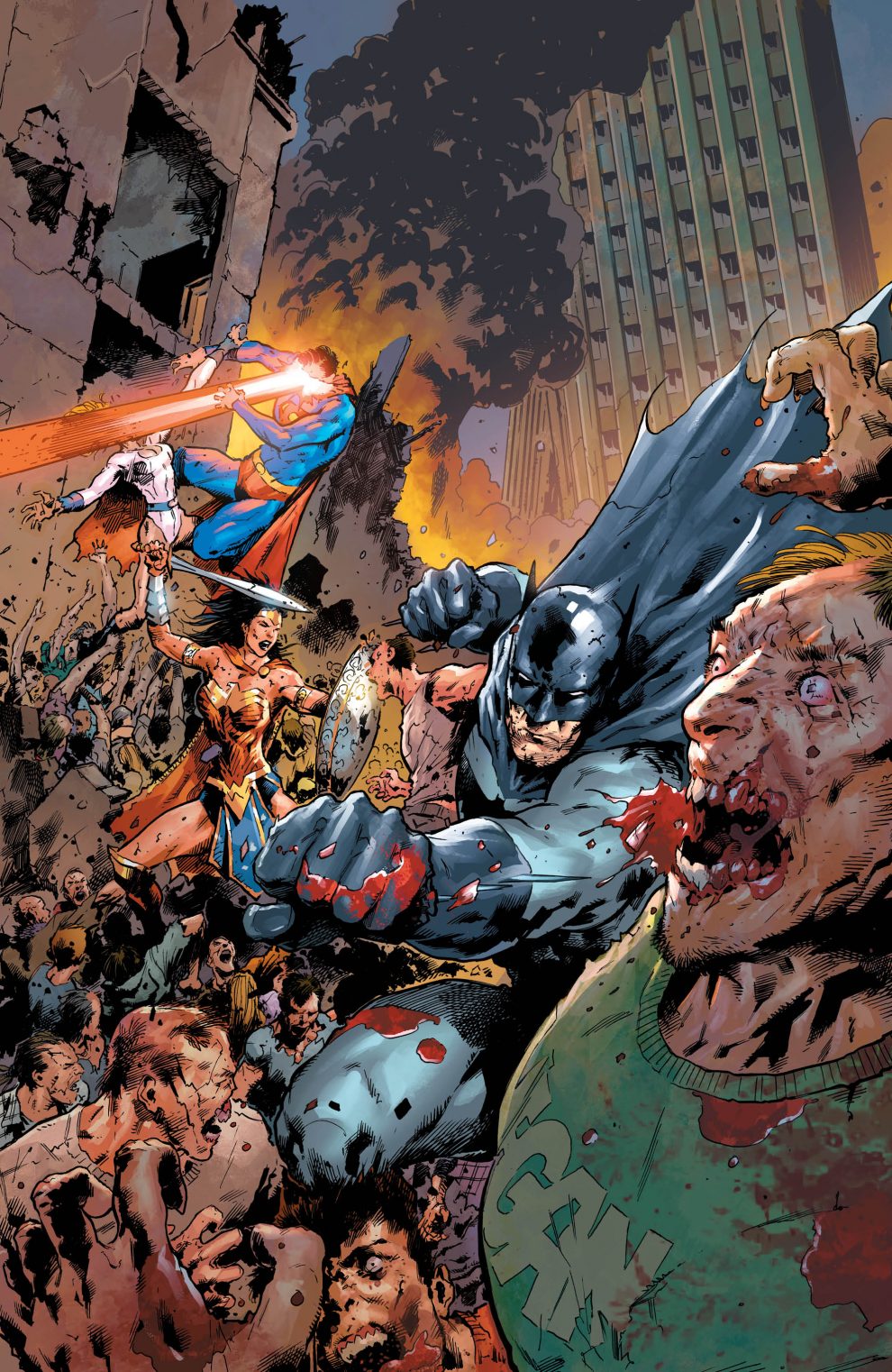 Once again the title of this chapter has many connotations. I’m not going to spoil anything, but bear in mind that 70% of our world is covered in water, and add that to the thoughts I’ve already left you with. Saida Temofonte’s lettering throughout the issue, particularly on the title page, fit this story so well that it feel that she and Tom taylor share the same brain.
The line art by Trevor Hairsine and Stefano Gaudiano – who manage to juggle carnage, violence and moments of deep emotion perfectly – is sublime. Harley’s confrontation with an infected Joker actually made me jump for joy, just as the scenes with Mera, Superman’s experiences in Metropolis and Kansas tore my heartstrings, and ripped my guts out. The way these artists draw the deepest of emotions with pencil lines and brushstrokes never ceases to amaze me.
Rain Beredo’s colors on this book are first rate. Check out Superman’s face on the very last page (not pictured here, so BUY THE COMIC), his organic and totally non-ketchup-like blood, his lightning, explosions and heat vision effects are fantastic.

After issue #1 I didn’t think Tom Taylor and the gang could surprise me again. Issue #2 shut me up. DCeased #3 has shown me that this team isn’t just entertaining us, they’re showing a side of zombie apocalypse comics that no-one has ever thought of depicting before. Never have the heroes of the DC Universe seemed more real, or more human.
This series is 24 carat gold.