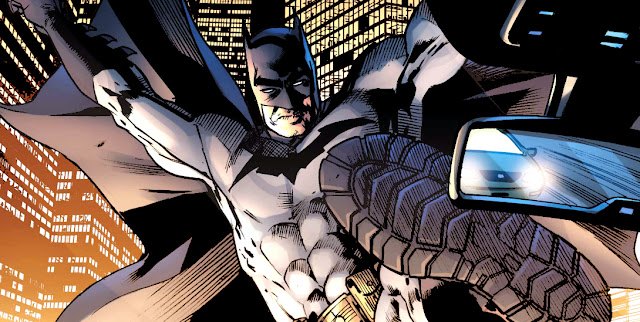 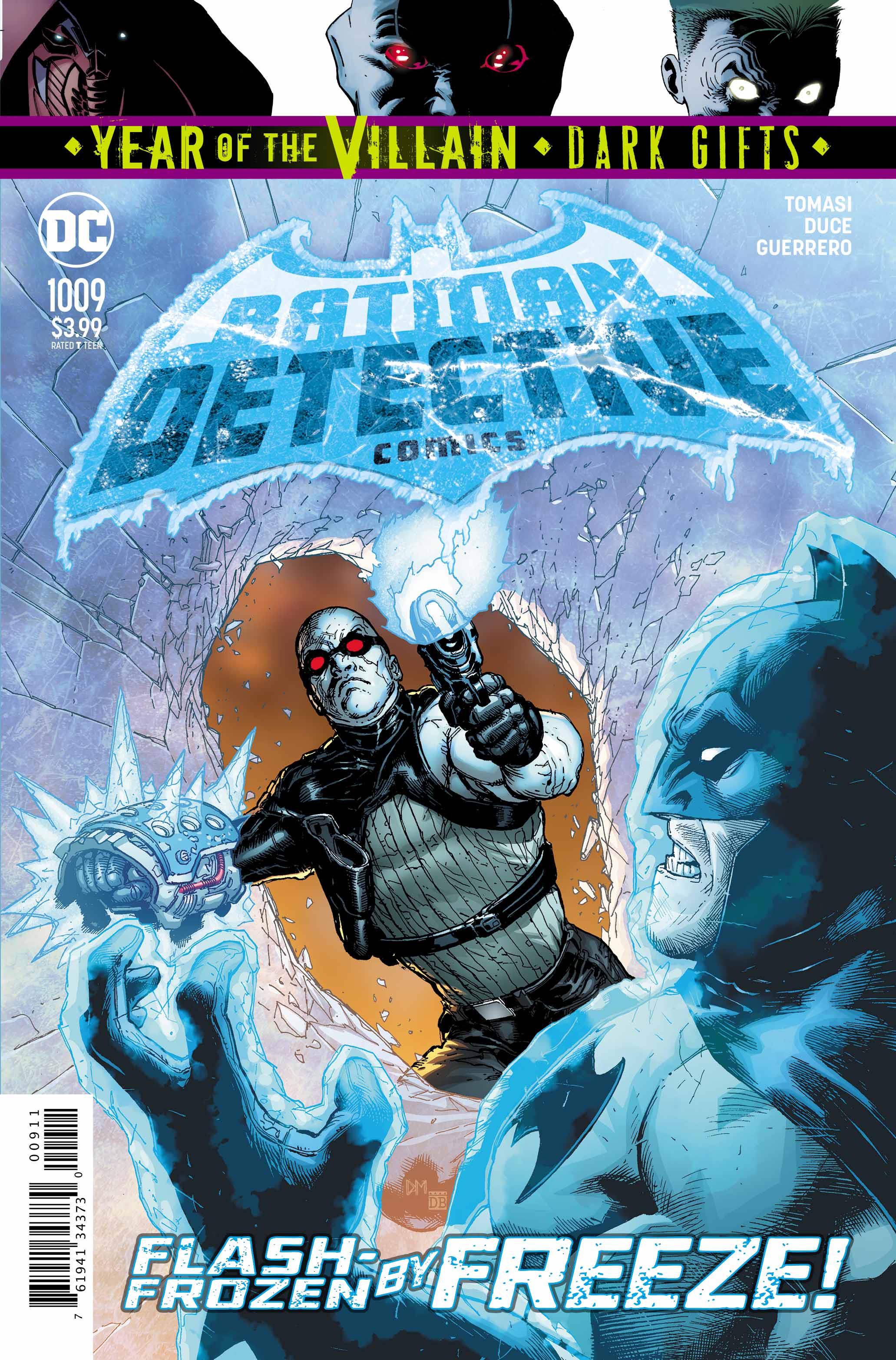 Detective Comics #1009 is the kind of comic you can hand to someone and say, “Hey, do you want to read a ‘textbook’ Batman comic? OK… here you go.”
Now, please don’t misunderstand me, I’m not calling the issue formulaic nor generic. No. What I’m saying is that it’s a near perfect template as to what a great Batman comic, nay, what a great action/adventure comic should look like.
We start with two in-your-face front covers; the first by Doug Mahnke with colors by David Baron, depicting the star of the cross-over portion of the issue, Mr. Freeze. The variant cover by Bryan Hitch, with colors by Alex Sinclair, has Batman diving, boots first, toward the windscreen of a fast moving car, driven by gun-toting crooks. Either of those is enough to grab any potential readers’ attention!

As soon you open the book: Whammo! Straight into Batman knocking a goon’s teeth out, and rounding up several groups of miscreants, all in the space of six beautifully drawn and colored panels. It’s not just the action, it’s the way that Peter J. Tomasi completely offsets the carnage with Alfred giving his boss a great Pennyworth telling-off.
Fantastic.
By the time you get to page two, where you’ll find a vintage Batman; standing atop a Gotham gargoyle, a grimace on his face, his costume torn and shredded, and with the blood of villains on his hands… you know that you’re holding a terrific comic. 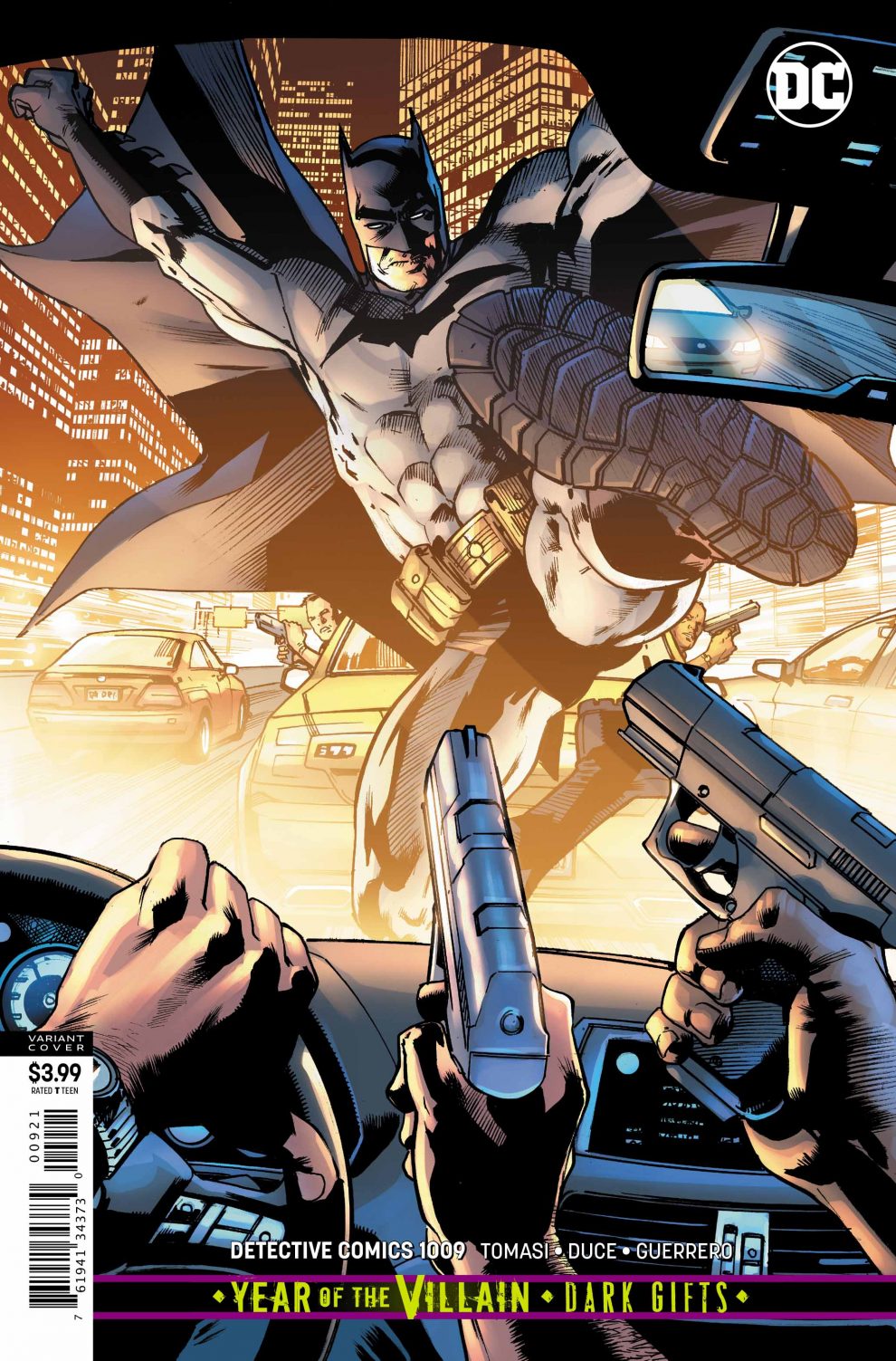 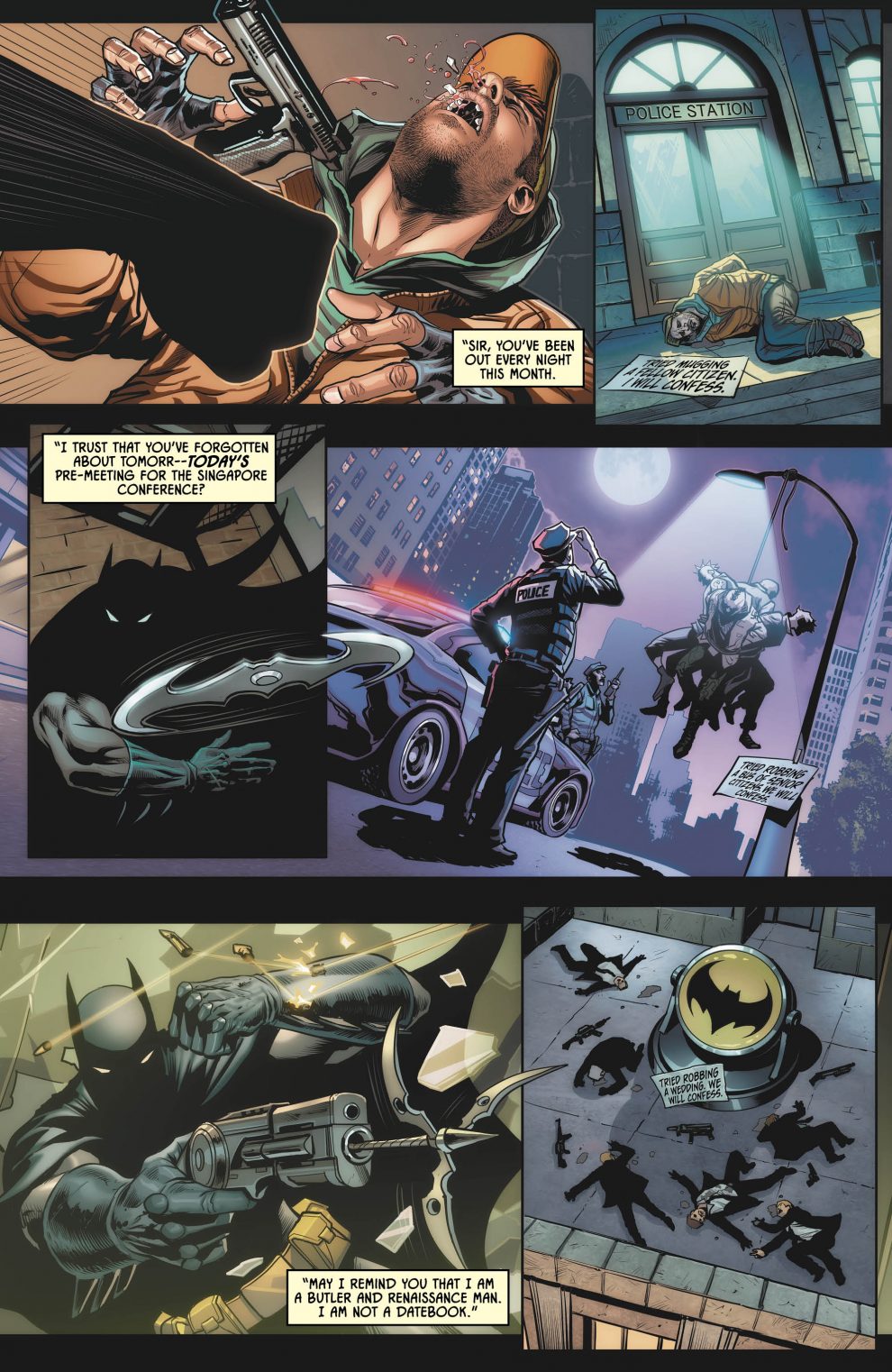 Oh… and the humor. Imagine Bruce Wayne, unimpressed with how Lucius Fox has handled a presentation in the Wayne Industries boardroom:

Fox, call the rest of the CEOs and tell them we’re jet-pooling to Singapore. I mean, there’s no need for all of us to take separate Gulfstreams, right?
And, buddy, I want you to take an acting class pronto.
Call Clooney, He owes me.

It’s so great seeing Christian Duce working on a Batman book again. He drew some terrific issues of this title a couple of years back, during James Tynion’s stellar run, and I’ve missed his work. He doesn’t disappoint. The story starts off all-action, but Mr. Duce handles Batman’s return to the cave and Wayne Manor brilliantly. His character acting, body language and storytelling perfectly complimenting Tomasi’s script. 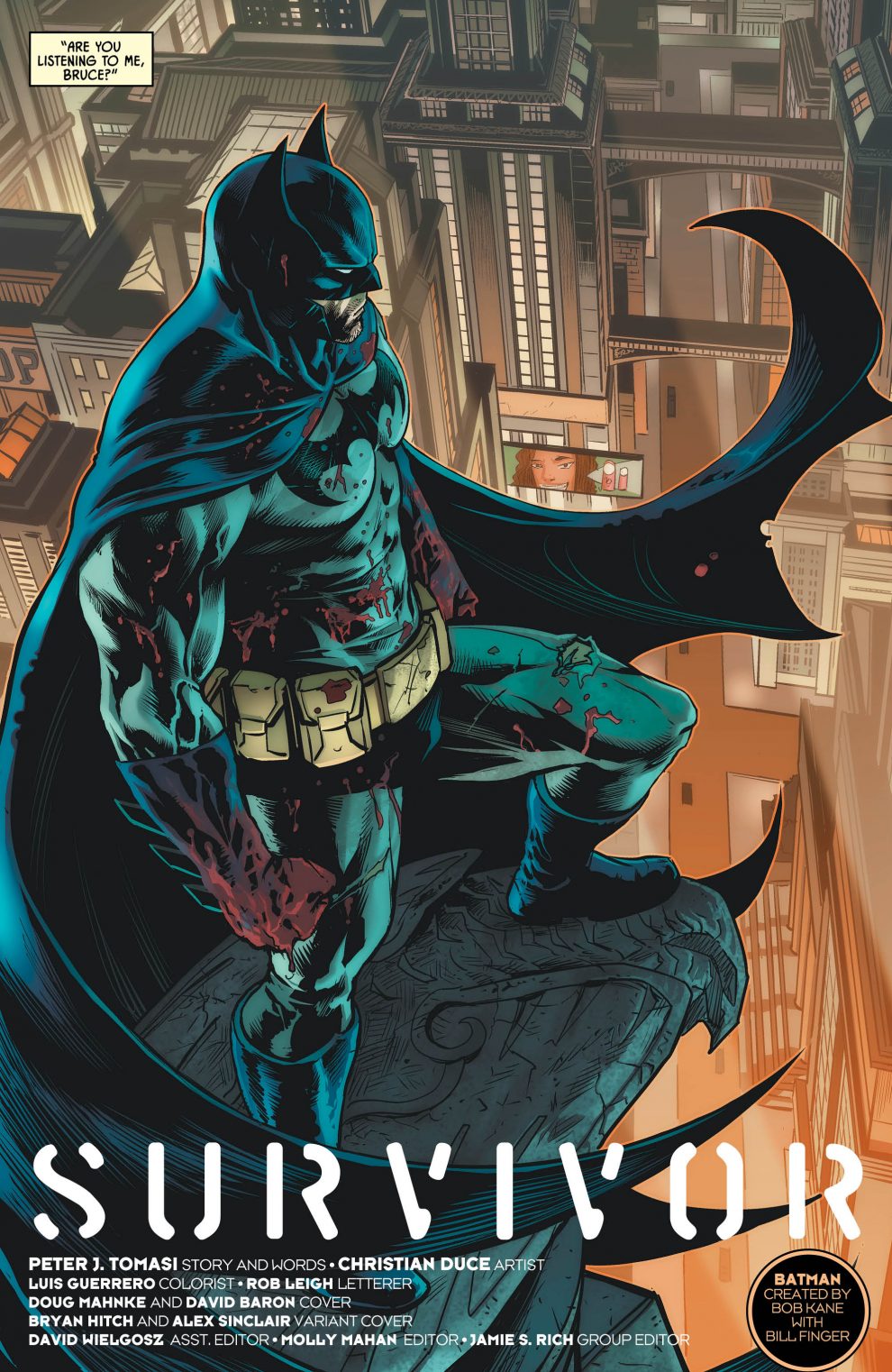 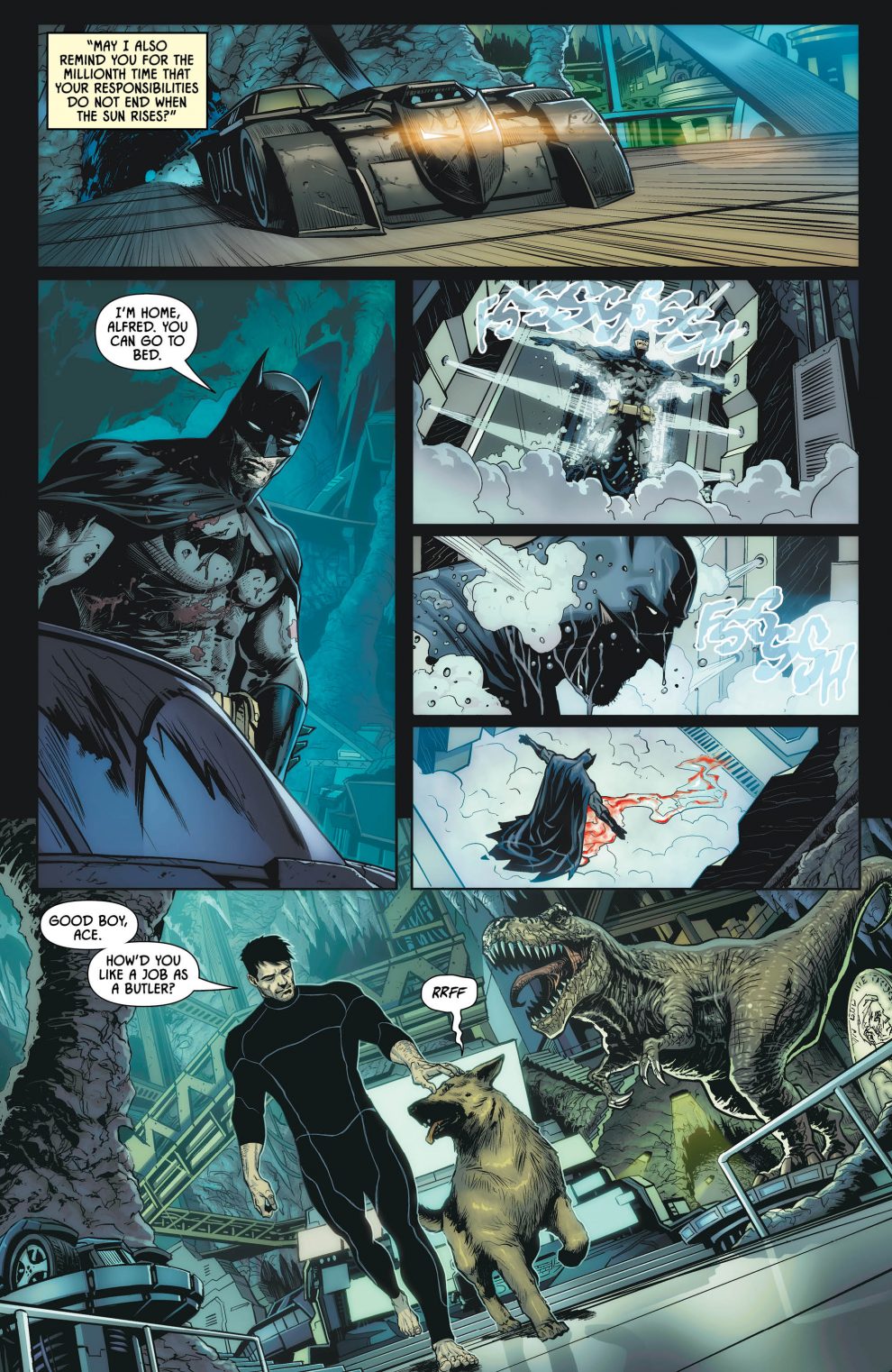 Luis Guerrero’s color art has been a revelation. From the light flooding onto the sidewalk outside Gotham PD HQ, the purple skies and moonlight, the orange glow of the city – hundreds of feet below the Batman – and the headlights of a homecoming Batmobile, Mr. Guerrero’s work on this issue is the perfect compliment to Christian Duce’s stellar line-art.
Anyone who reads my reviews knows that I’m a huge fan of Rob Leigh’s work. Once again Detective Comics #1009 is a perfect example why. From the steamy, splashy sound effects of Batman’s decontamination shower, to the numerous gunshots that litter these pages, we see the work of an artist who not only knows what he’s doing, but seems to be loving every minute of it.

When I say that this is textbook comics storytelling, I mean it. In this issue we get an unapologetic set of villains, action, disaster and a killer arial action sequence. Then we close the chapter with that old staple, the cliffhanger ending. To any fan who wants 20 pages of kick-ass comic -book excellence, this is the issue I’d hand them.
If you don’t agree, heck I’m just a humble reviewer, don’t shoot the messenger…
… that’s Deadshot’s job.