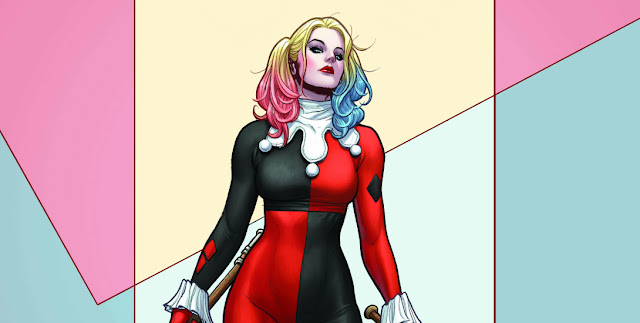 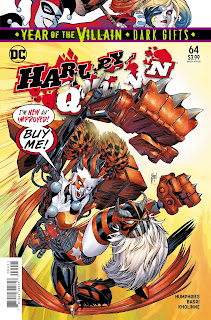 Harley’s tried everything to avoid Lex Luthor and his stupid “Offer." She’s destroyed half a dozen of Lex’s drones, she’s changed her name, her cell phone number... she even faked her own death! Why won’t this bald, pasty-faced weirdo take no for an answer? Harley Quinn takes on the crossover event of the summer in this comic-within-a-comic take on “DC’s Year of the Villain.”

Harley Quinn #64 is probably the best written issue of the comic. The issue starts, and finishes, with some very emotional beats. The middle however, is jam-packed full of comedy, and it's the perfect Harley Quinn level of crazy comedy too. Sometimes I feel, the crazy outweighs the comedy with Harley, but this was a perfect blend of the two.
Yet again, the Trials of Harley Quinn get pushed to the back, as DC get ready for another crossover event as The Year of the Villain is here.
Now, I seem to be saying this a lot, but I guess that’s just a testament to how good a job Humphries and the team are doing. This is, by far, the best Harley Quinn comic I have ever read. The underlying emotion was rich throughout the issue, and the constant cuts back to the real world from the comic made sure the reader felt all of it.
I previously mentioned the comedy of the issue. There have been moments in past chapters where the comedy has leaned heavily into the crazy side of Harley’s personality. This time out however, Humphries definitely pushed forward the comedy. Not only that, but it was genuinely hilarious comedy too! Even with the emotion underlying this issue, I was genuinely laughing throughout.

Honestly, this was quite possibly the most perfect issue of Harley Quinn I’ve ever read. It was an absolute delight to read and watching Humphries’ address the whole ‘Offer’ situation.
Which, came to a very good and understandable conclusion.

Quite possibly the most self-aware issue of Harley Quinn we’ve ever had! Whilst also being the most perfect. Humphries needs to be left well alone working on this series. I mean, DC can just leave him in a basement writing issues of Harley Quinn forever!
Basri also does a brilliant job at drawing Harls in her old costume. Gave me all of the nostalgia feels!
This comic is incredibly well written, and drawn. I look forward to seeing what else Humphries has in store.