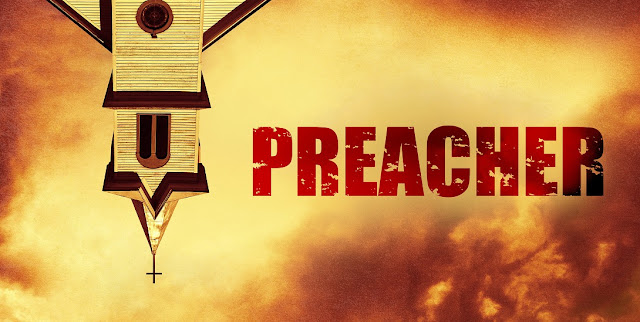 The man with the Voice, the stoner vampire and the world’s cutest assassin are back! Jesse regained his powers at the end of season three, but he and Tulip lost Cassidy to Herr Starr’s Order of the Grail. “Masada” is the organisation’s fortress lair, and this episode tells the story of our heroes’ rescue mission to save their blood sucking buddy. Boy… those Grail agents really have guts. Hold the door!

Where do I even begin? This episode is a masterclass in grabbing a viewer’s attention. We open with Tulip and Cassidy, but have no idea how they could be together after the way we left them at the end of season 3. We then cut to scenes of Jesse going to ground in Australia, of all places, again drawing us in and making us wonder just what the holy heck is going on.
The episode contains all the weird, wonderful, irreverent and quirky fantasy that we’ve come to love and expect. There’s gore, violence, innuendo and the best one-liners ever, all performed with flair and shot with gusto. I have to say that this episode feels very polished and the production levels seem to have improved. This show has always looked great, but “Masada” raises the bar.

The establishing shot of the Grail’s HQ is very impressive. There’s a single sweep which sees the desert landscape fly by, before the camera reaches the top of the structure and swoops down, into the bowels of the fortress, where we find our Irish rover. The always brilliant Joseph Gilgun is on top form, and his banter with Julie Ann Emery’s agent Lara Featherstone is vintage Preacher.
Dominic Cooper and Ruth Negga are also at their bellicose best. These guys can fight! The greatest bit is that it’s not always just the baddies they’re battling with, and sometimes the more entertaining conflicts are their own inter-personal ones. This gang really puts the fun in Dysfunctional. Also look out for a brilliant new character, Frankie Toscani, the Grail’s head torturer. This guy really gets blunt, and right to the point, with poor ol’ Cassidy. Frankie is brilliantly played by Lachy Hulme.

I’m concerned. I’ve loved this show from the beginning, and while the characters’ constant butting of heads is entertaining, I feel that the team really is fracturing this time. This is more a niggle because of how much I love all these characters, though. I know that the incredible writing team on this show are keeping fans on their toes, and that everything will work out. I’m also very worried about the serious gravity of Jesse’s outback excursion.

“Masada” is a picture perfect season opener. Every cast member is on fine form, not least the wonderful Pip Torrens, as the ever more downhearted Herr Starr. The episode is visually impressive, action-packed and hilarious. We only got a brief glimpse of Eugene and the Saint of Killers this week, but we know that they’re hot on Jesse’s trail.
Episode two is titled “The Last Supper” and getting my cutlery ready.