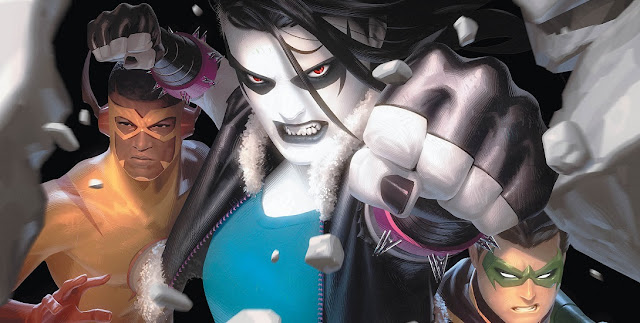 “Naughty By Nature.” After the team’s first devastating encounter with Crush's father, Lobo, the Teen Titans have a new mission and a new lease on life. Robin finally has a lead in his quest to find the Other, and he confides in Red Arrow that he believes the person who freed his prisoners was one of their teammates. As Damian’s hunt for the mole begins, Lobo accepts a gift from Lex Luthor and an unholy alliance is born. Teen Titans #33 sees a new chapter for the team, and sets the Boy Wonder and Djinn down a dark path.

Wow… talk about your bold, new directions. I thought having an underground prison for supervillains was bad, but Damian’s new agenda, with Djinn as his accomplice, makes that plan look tame. I’m not one for spoilers, so all I’ll say is that the end of this issue is shocking, and that it gave me a chilling “Identity Crisis” vibe. Any fans familiar with that classic tale may have a clue as to what I’m talking about, but everyone needs to buy this book.
Adam Glass, you’re scaring me. Keep it up.

While I did miss Bernard Chang and Marcelo Maiolo this month, the guest art team have done a bang up job. Penciler Sean Chen, inker Norm Rapmund and color artist Ivan Plascencia are established comic-book pros. Their art on this issue is terrific, in-keeping with what’s come before and lovely to look at. Regular letterer Rob Leigh keps the consistency, and the book works on all levels. I love Chen and Rapmund’s version of Lobo, and their designs for the team’s “villains” at the end of the issue are great.
As a decades long fan of almost every iteration of the Teen Titans it was fantastic seeing Mammoth and Shimmer in these pages. These siblings, as part of the Fearsome Five, have always been firm favorites, so seeing them here, and in the pages of Titans: Burning Rage this month, has made me very happy.

Usually I’d complain about the change in art teams, but the fill-in squad is superb, so I have no gripes. The transition was smooth from the last issue, in terms of both story and art. Nice work from everyone involved.

I’m still in shock after witnessing Robin and Djinn’s dark plan. I know that they have noble intentions, but I cannot condone their behaviour, nor their actions. I hope that they come to their senses before the rest of the team discovers what’s going on, and woe-betide Damian Wayne if Batman finds out! Teen Titans #33 is great, and I love what Adam Glass has brought to this series, no matter which incredible art team is helping him do it.