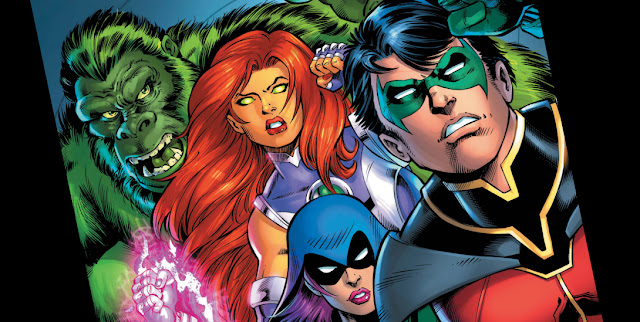 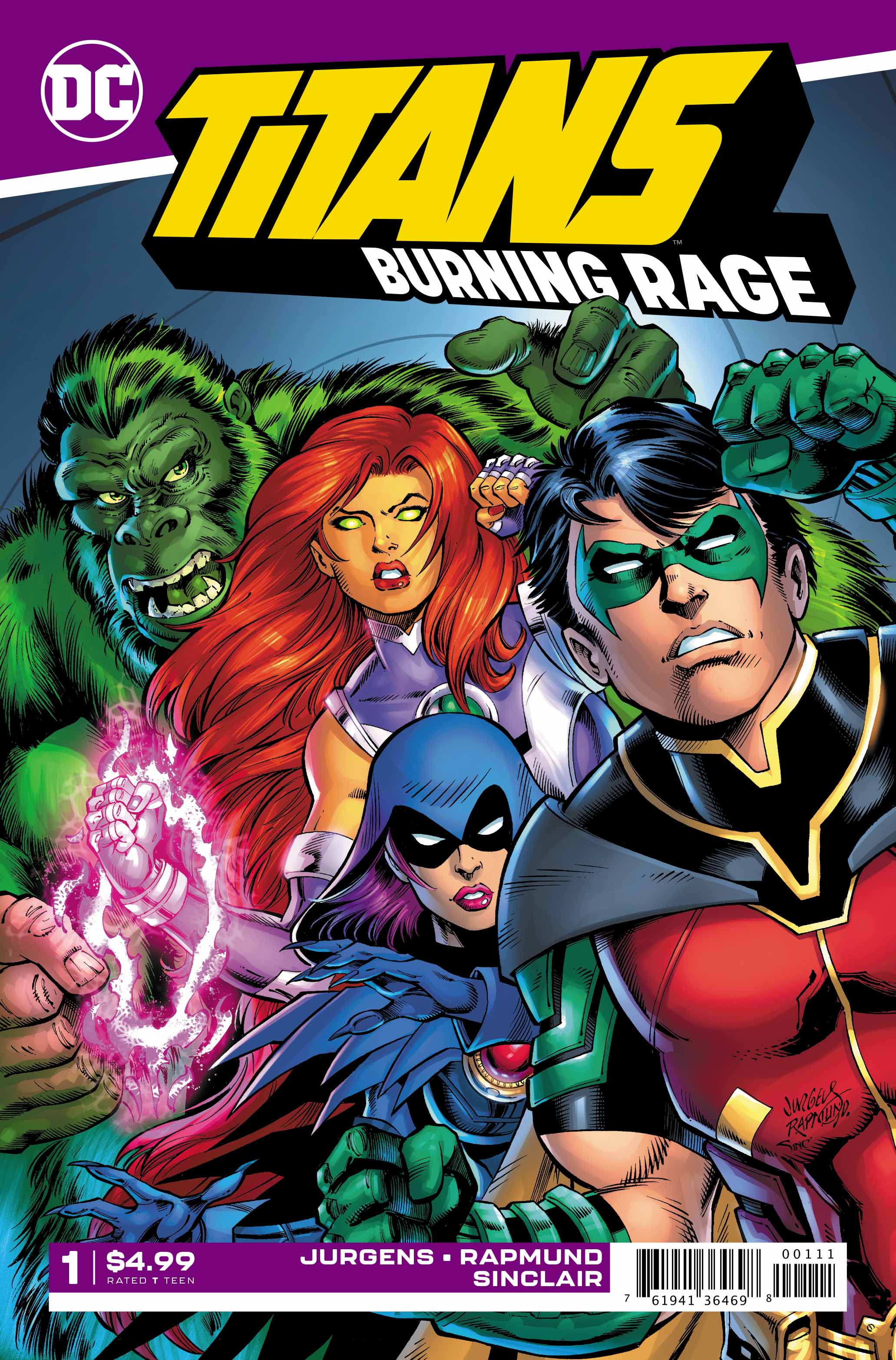 Review by Steve J. Ray
Titans – Burning Rage #1 collects the new stories from the first two issues of the rare, Walmart-exclusive Teen Titans 100 Page Giant anthology comics. As soon as I saw the simple, yet striking, Dan Jurgens cover I was transported to my own personal golden age of comics. The style perfectly captures the magic of the legendary 80s Marv Wolfman/George Perez run on Teen Titans… the story inside doesn’t disappoint either.

Dan Jurgens is a clever, clever man. He’s given us a classic Titans line-up: Robin, Starfire, Raven and Beast Boy, but this team isn’t the one from my youth. I should’ve guessed that this would be the case as the word “Teen” was missing from the title. This isn’t Dick Grayson leading the team as Robin, it’s Tim Drake! Be still my beating heart! Don’t get me wrong, I’m a huge Dick Grayson fan, but that hero has become his own man and a legend in his own right as Nightwing. Also, while Damian Wayne is a worthy bearer of the mantle, for me Tim is the most underrated Boy Wonder of them all.
Clever. I’m getting an all-new iteration of a team that I love, led by a character that I feel we really don’t see enough of. 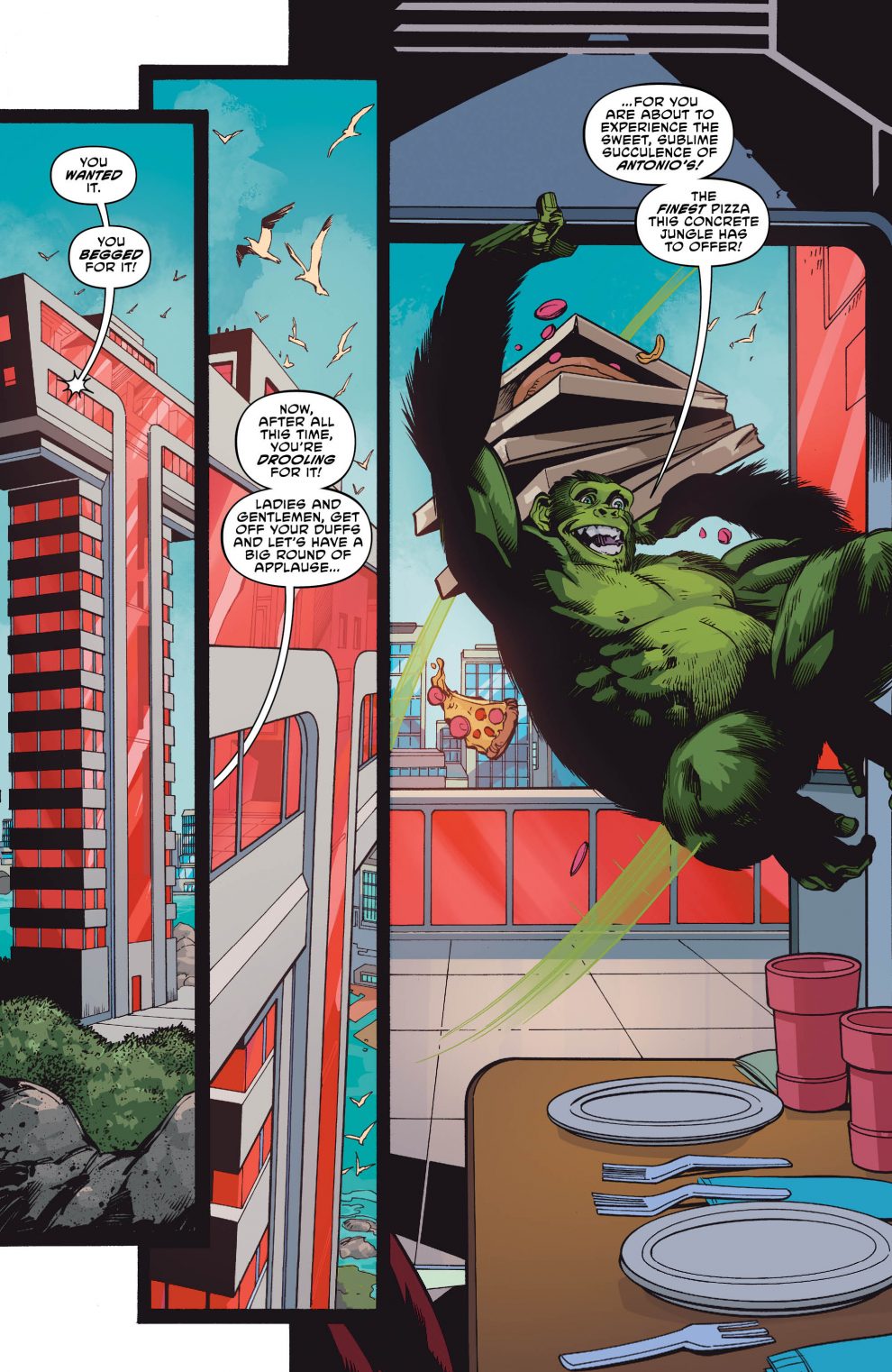 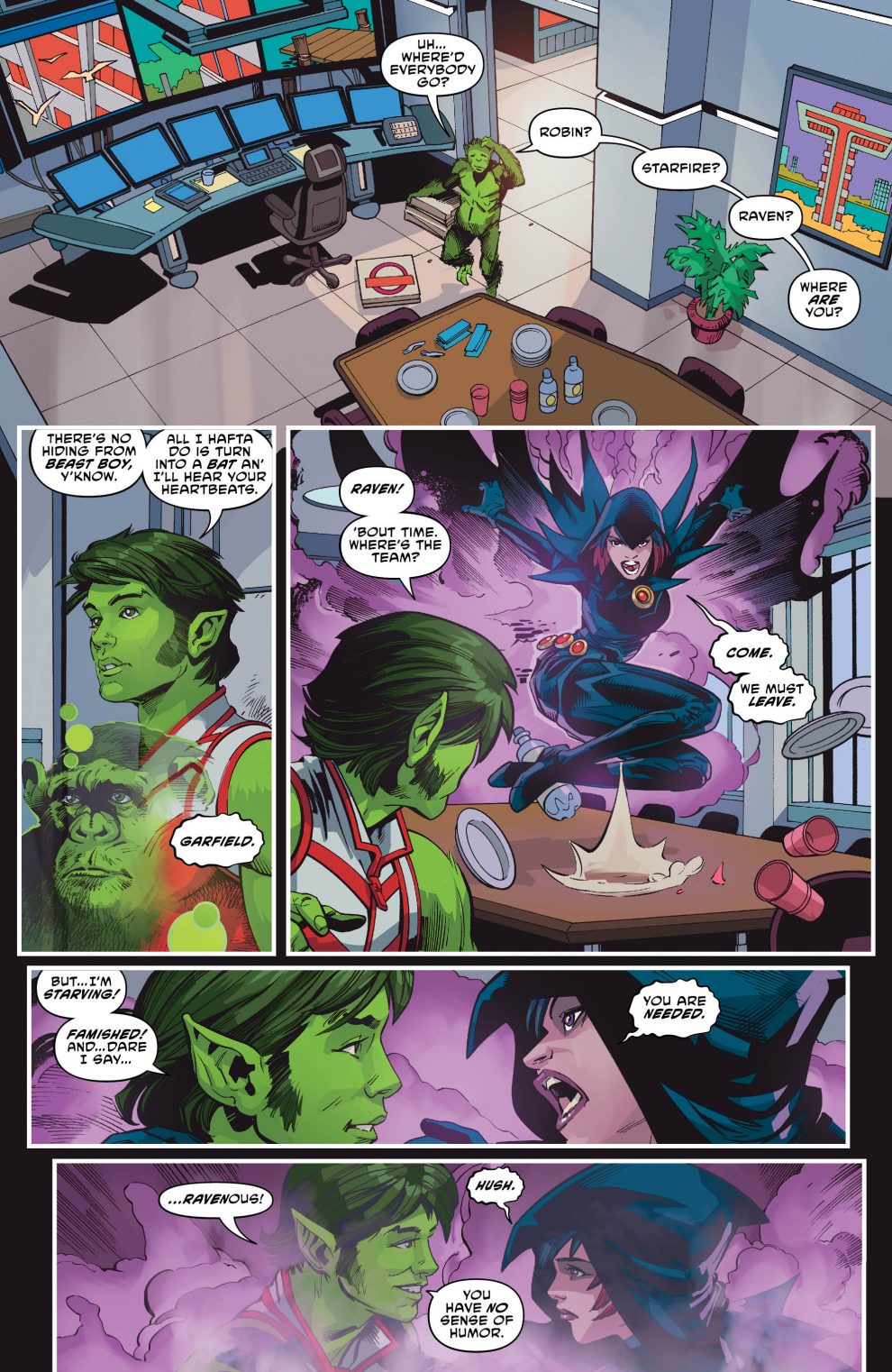 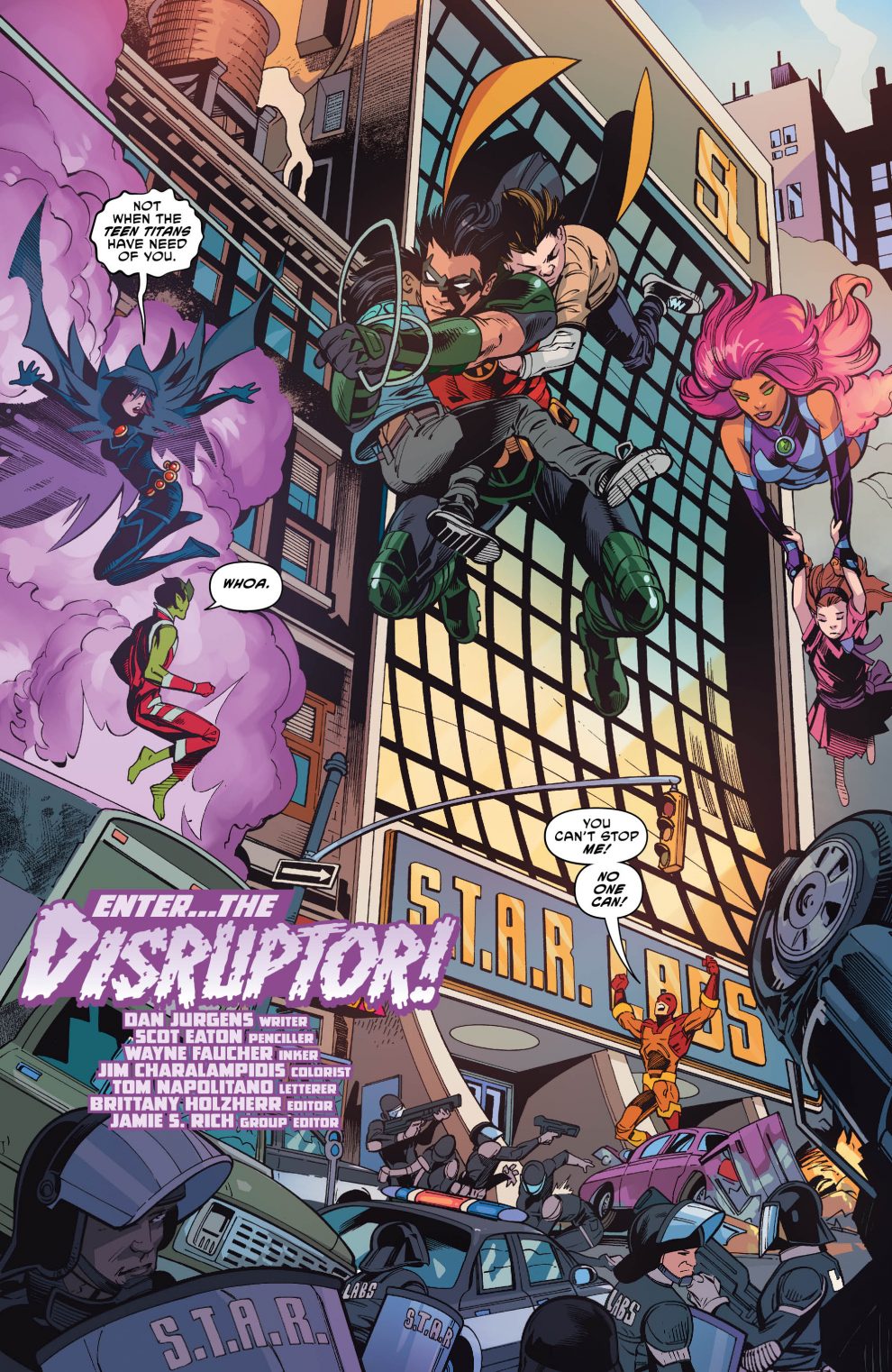 What’s also extremely well thought out is the pacing and structure of the story. Many people love the Walmart books because of their simplicity and entertainment value, but there’s plenty of sophistication and intelligence for older and harder to satisfy fans, too. The tale begins with the team being handed a fairly serious loss by a villain called the Disruptor. Over the course of the issue the baddie has his powers amplified. If the Titans couldn’t beat him at half strength, what hope will they have against an even more powerful version?
This issue gives me another reason as to why I’ll happily pick up any comic with Dan Jurgens’ name on the cover.

Speaking of which: DC Comics… you’ve been naughty.
If you’ve looked at the art attached to this review you may notice that Scot Eaton, Wayne Faucher and Jim Charalampidis are credited as the art/color team on page three. Have you looked? Good.
However, if you read the credits on the aforementioned cover, they list Norm Rapmund and Alex Sinclair as the art team. Have you checked that out too? Great!
In the interests of diplomacy I have credited all these fine talents at the top of this review. My guess is that Eaton, Faucher and Charalampidis are responsible for pages 1-12, and Messers Rapmund and Sinclair took over for the second half of the book. (Possibly the rest of the series, too?) Still, I think it’s a little naughty of DC not to credit the team responsible for half this issue on the cover. 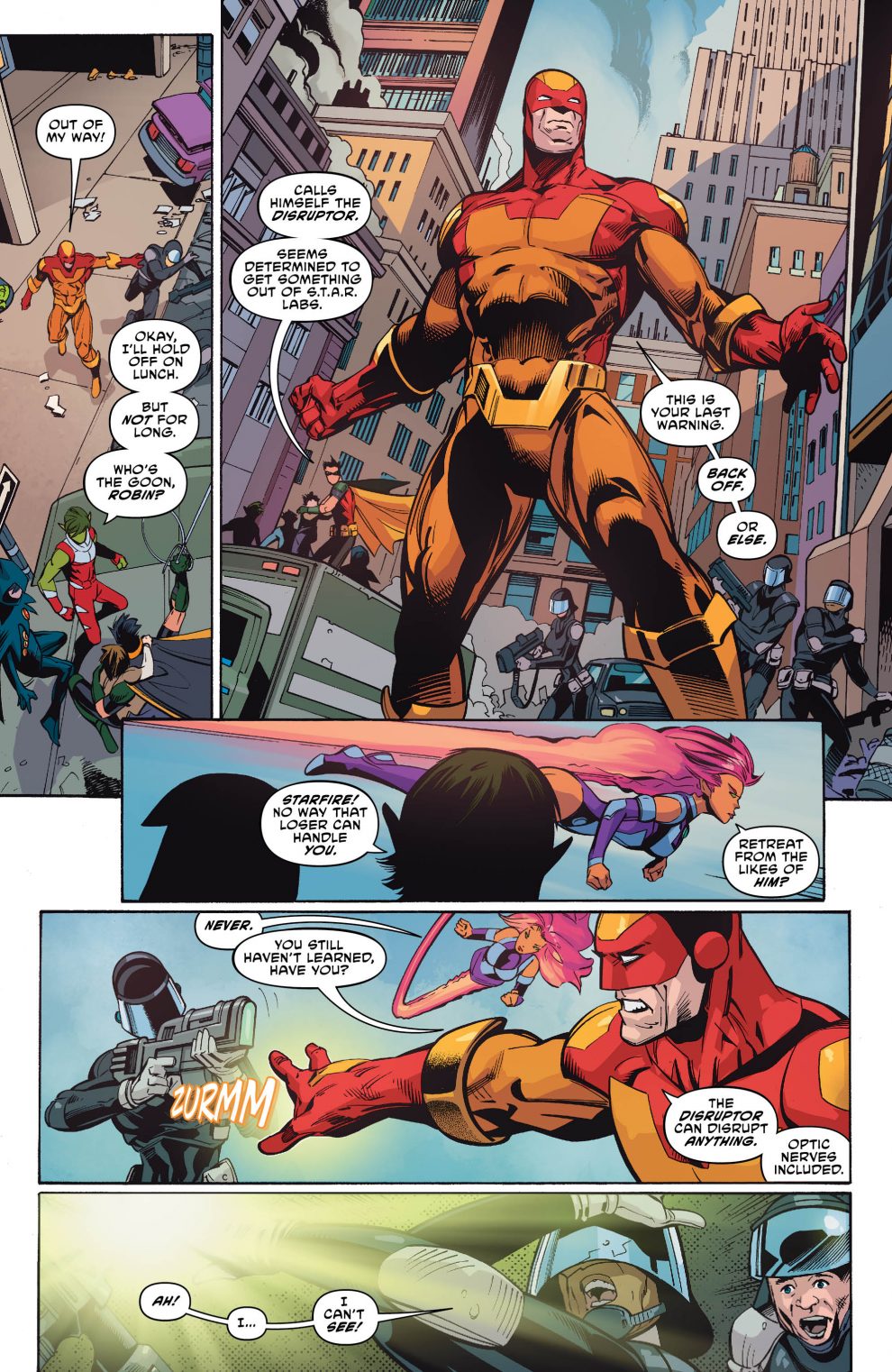 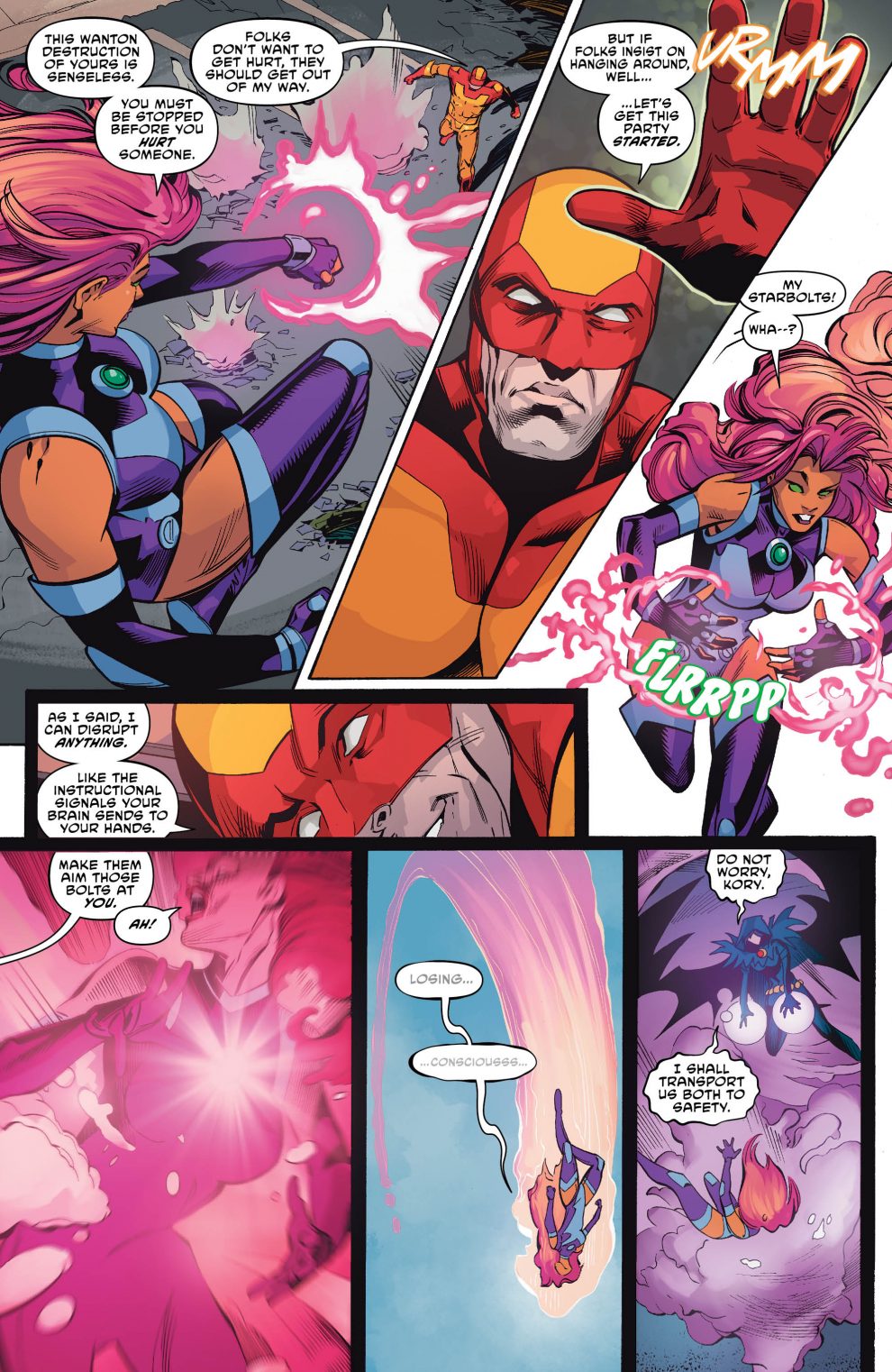 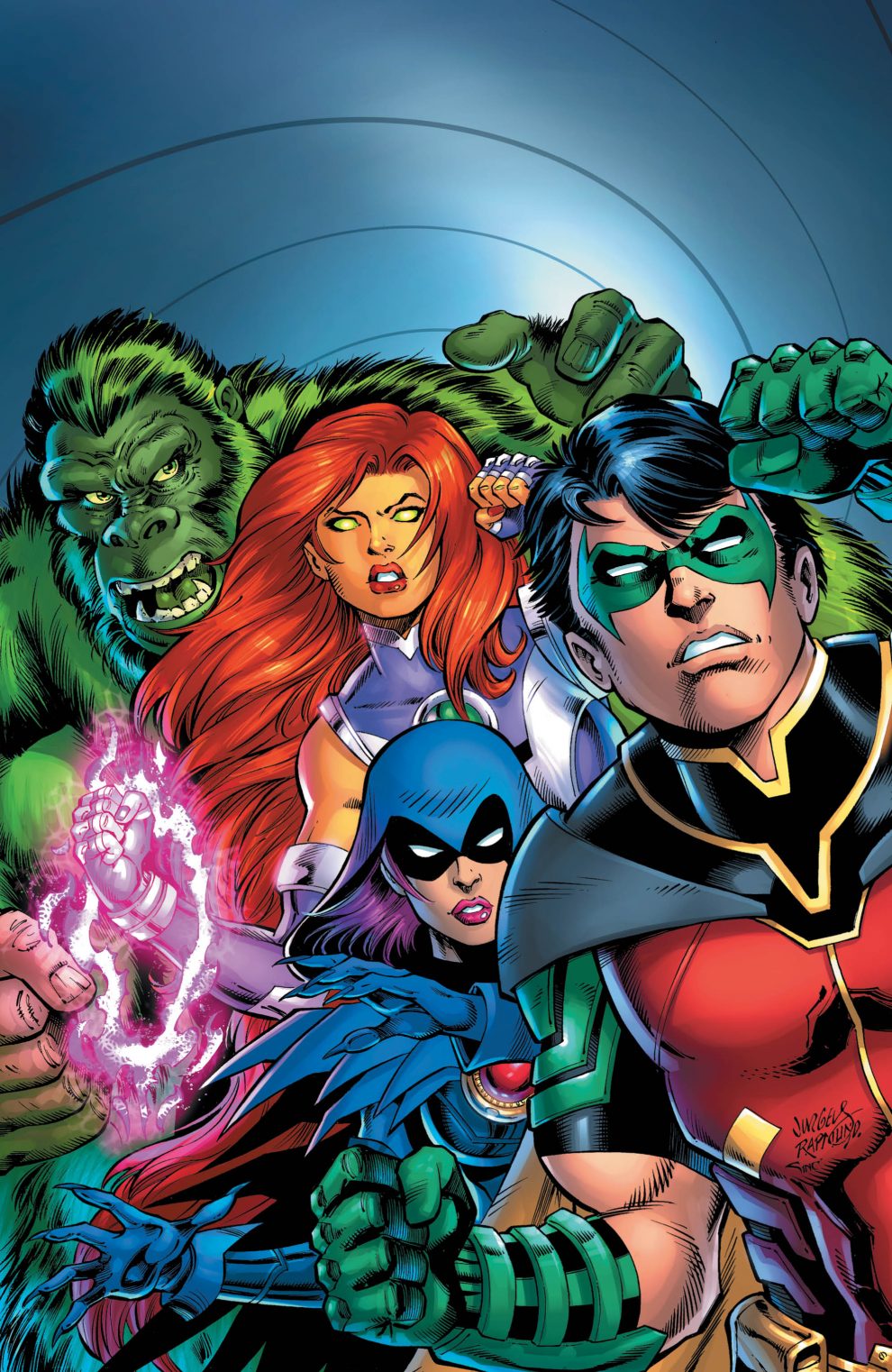 Regardless, whoever drew this comic did a darned fine job. There’s action, character, and everything in-between. The colors pop and 10/10 Tom (Mr. Napolitano to you and me) does a sterling job with the lettering too… as he always does.

Titans – Burning Rage #1 is a terrific first issue. It sets the stage, establishes a very credible threat and introduces a well written and brilliantly drawn team of heroes. These guys are great! Tim impresses as the leader of a group of crime-fighters that’s older and more experienced than he is, but all the veteran Titans are just as I remember them. My desire for nostalgia has been sated, and my thirst for something new has been quenched too. Happy days.
This issue is bordering on faultless – dodgy credits notwithstanding – and I can’t wait to read more. Bring on the Fearsome Five!