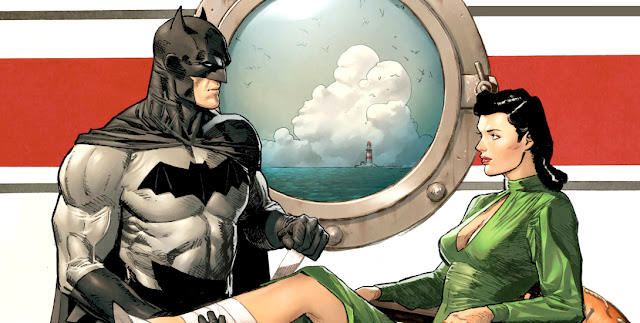 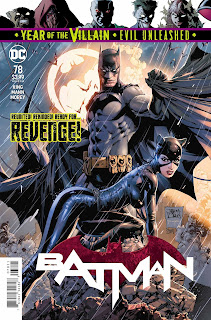 Issue 78 of Tom King's magnum opus has provided readers with a real change of pace. Eschewing events taking place in the Bane/Thomas Wayne ruled Gotham City, this issue instead focused on the recovery of Bruce Wayne, both physically and mentally. Whether we will ever get to witness what happened in the pit remains to be seen, but the effect on Bruce has been monumental. No quick fixes here, no climbing out of the pit and marching straight home. Instead, his recovery is taking place at an undisclosed Hawaiian location, with the assistance of a certain Selina Kyle.

As a result, this issue has a languid, almost serene pace to it, as the simply glorious artwork works in tandem with King's multilayered dialogue to create a book full of meaning and emotion. The artwork of Clay Mann in conjunction with Tomeu Morey's glorious color schemes are a genuine feast for the eyes. The exchanges between our principal characters are affectionate and playful, yet still heavy. This is a must read book, especially for readers that have followed this run from its inception. What makes it so good? I'll explain...

First off, the look of it. Mann has outdone himself with the sumptuous work on offer on these pages. The imagery is, to quote the ubiquitous Steve J. Ray, "photo realistic" at times. The glorious vistas, the peak of human conditioning figures of Selina and Bruce (complete with Matches Malone moustache), the ocean that looks as though it could be lifted straight from an episode of Blue Planet. The sense of this being a tropical paradise truly leaps off the page. Morey's color selections are pitch perfect, full of vibrancy and life. It has been a long time since such an explosion of controlled color captured my attention in such a big way, it demands more than one viewing. 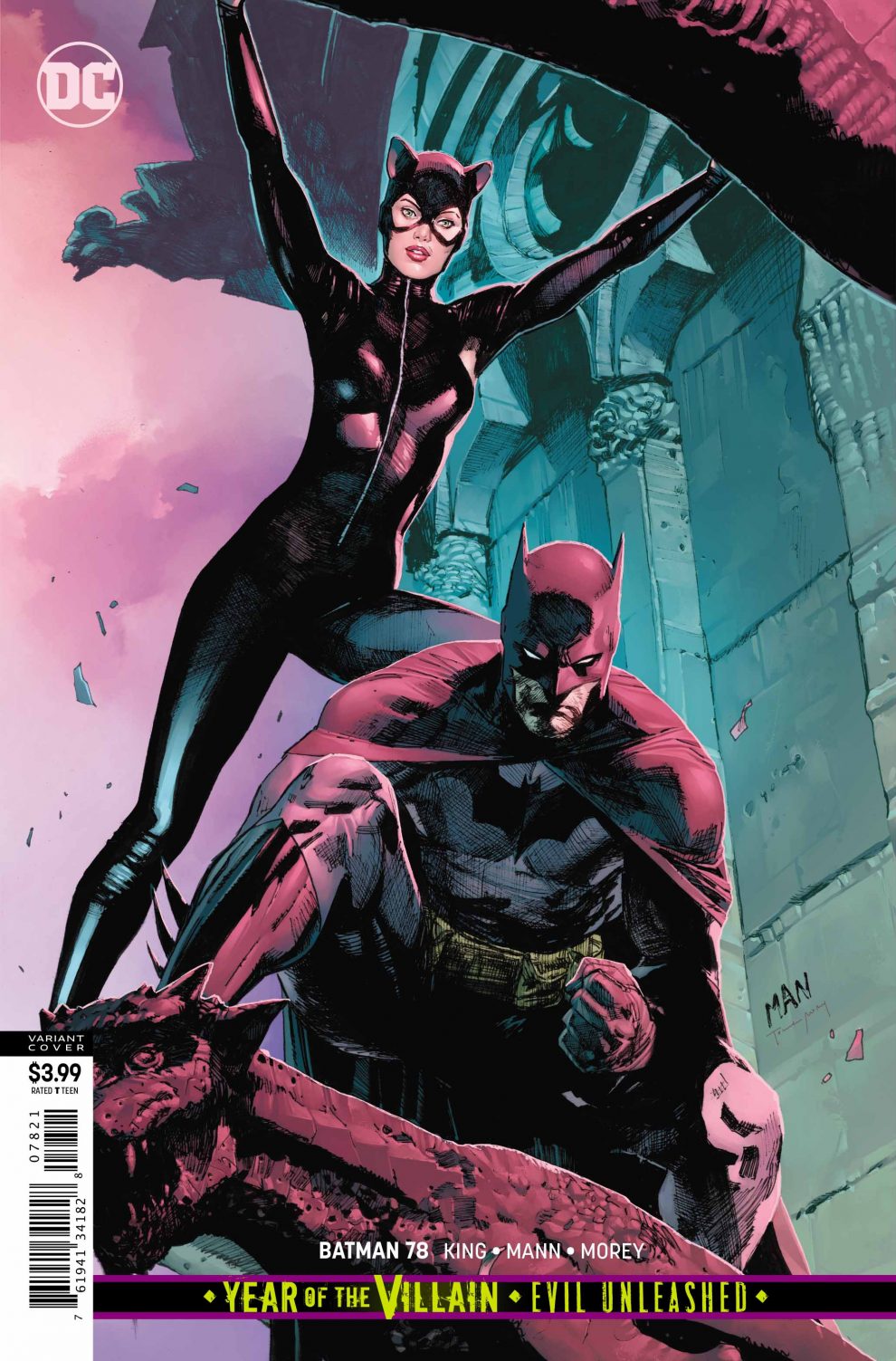 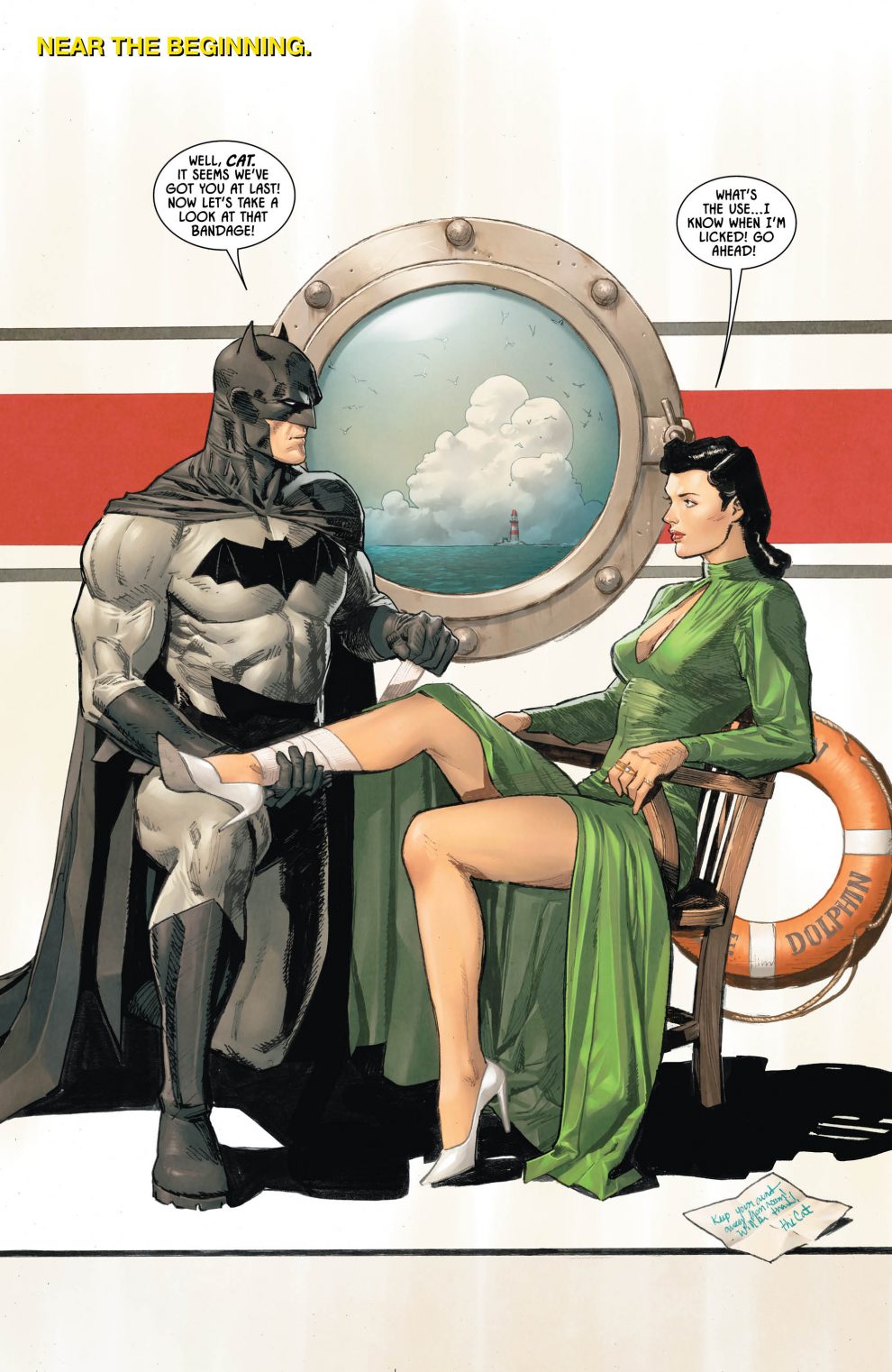 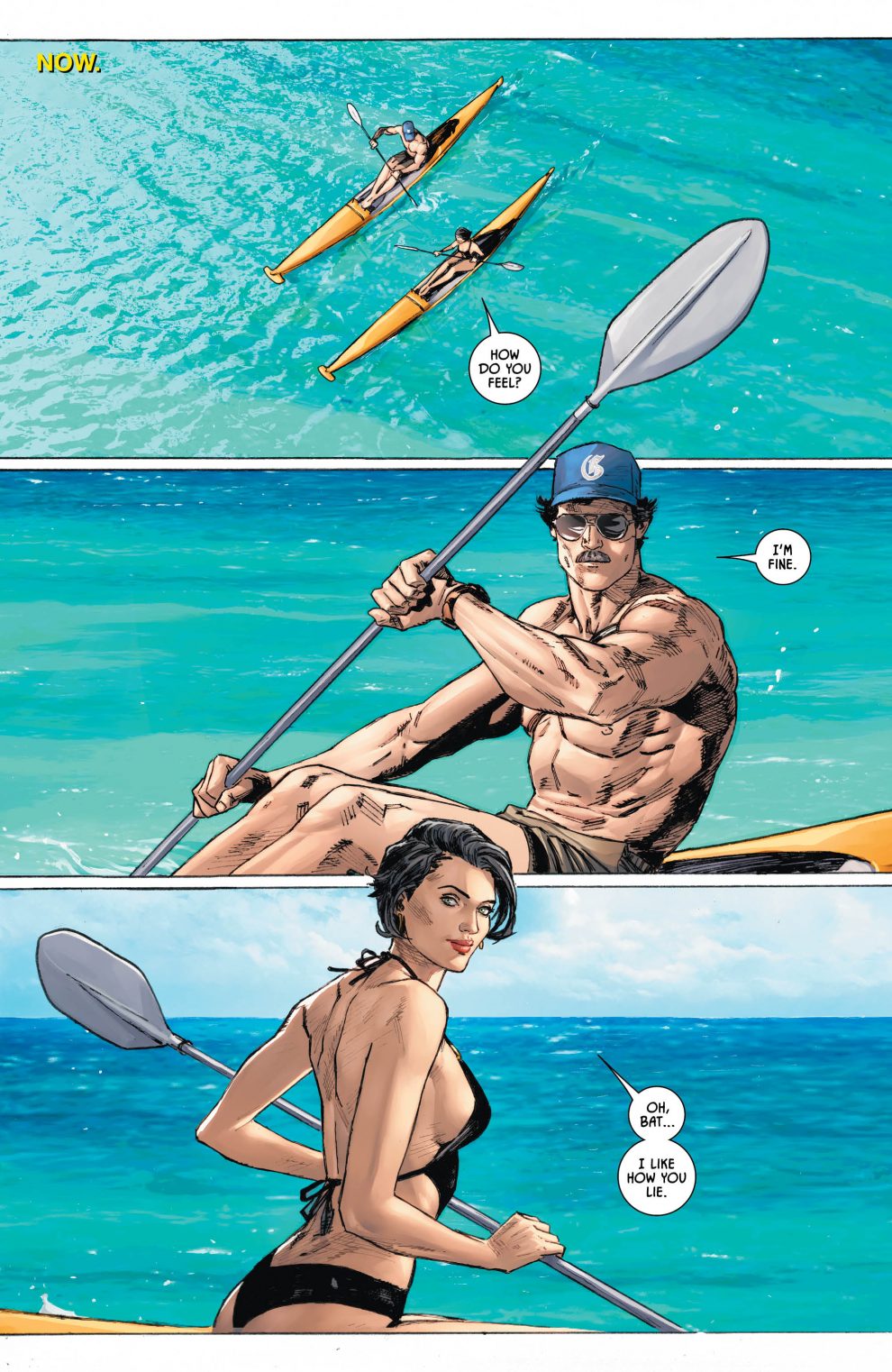 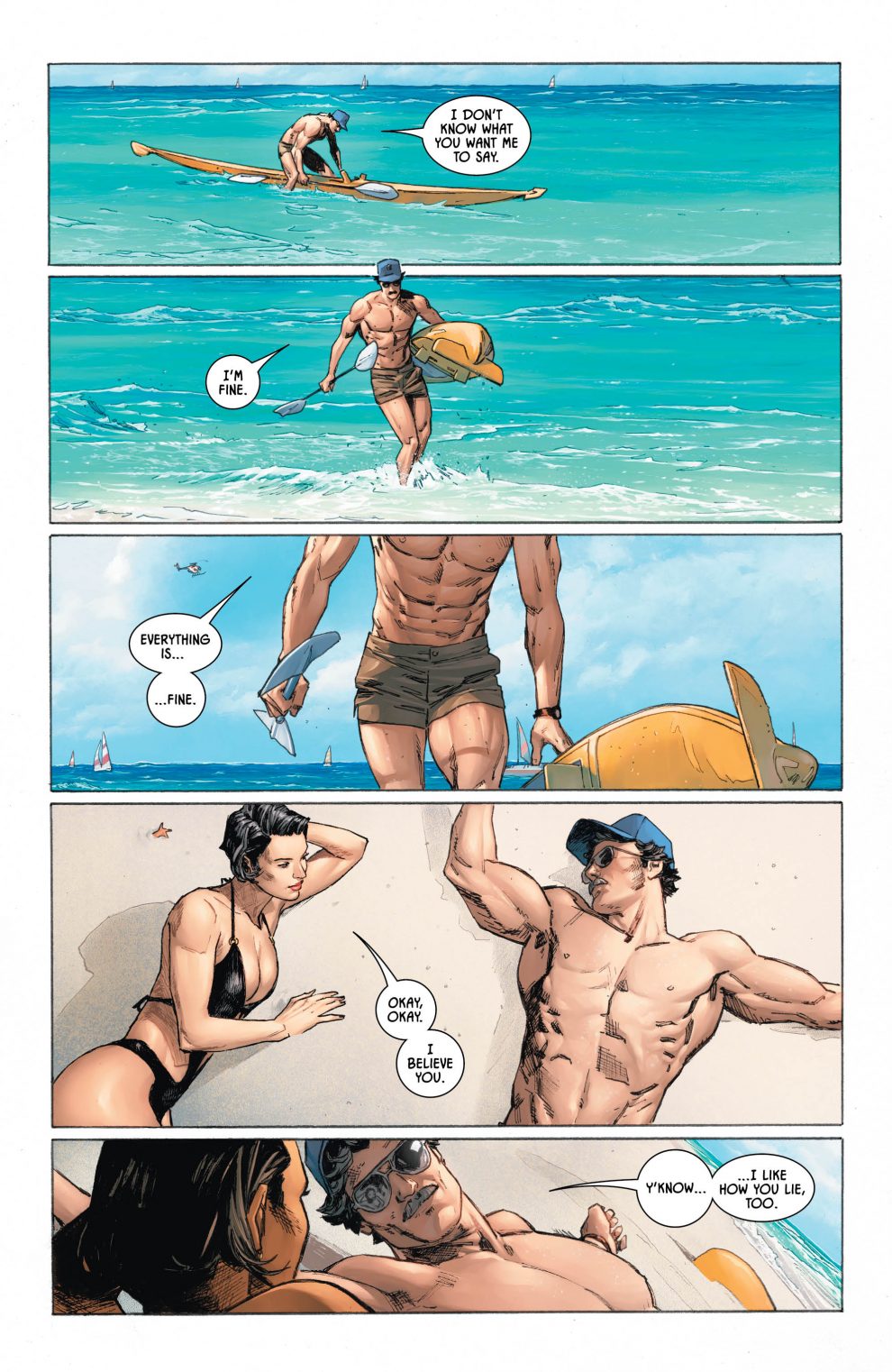 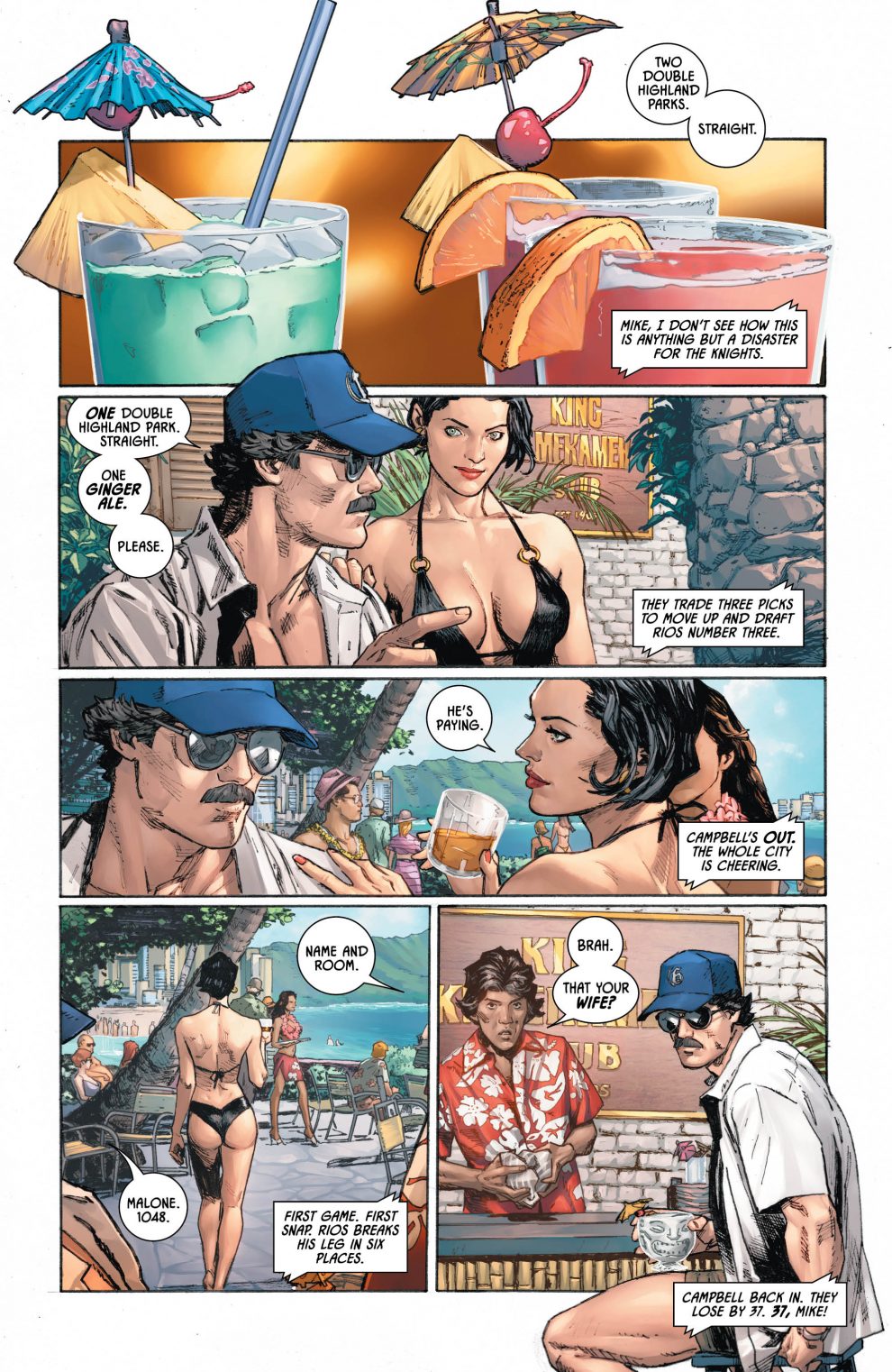 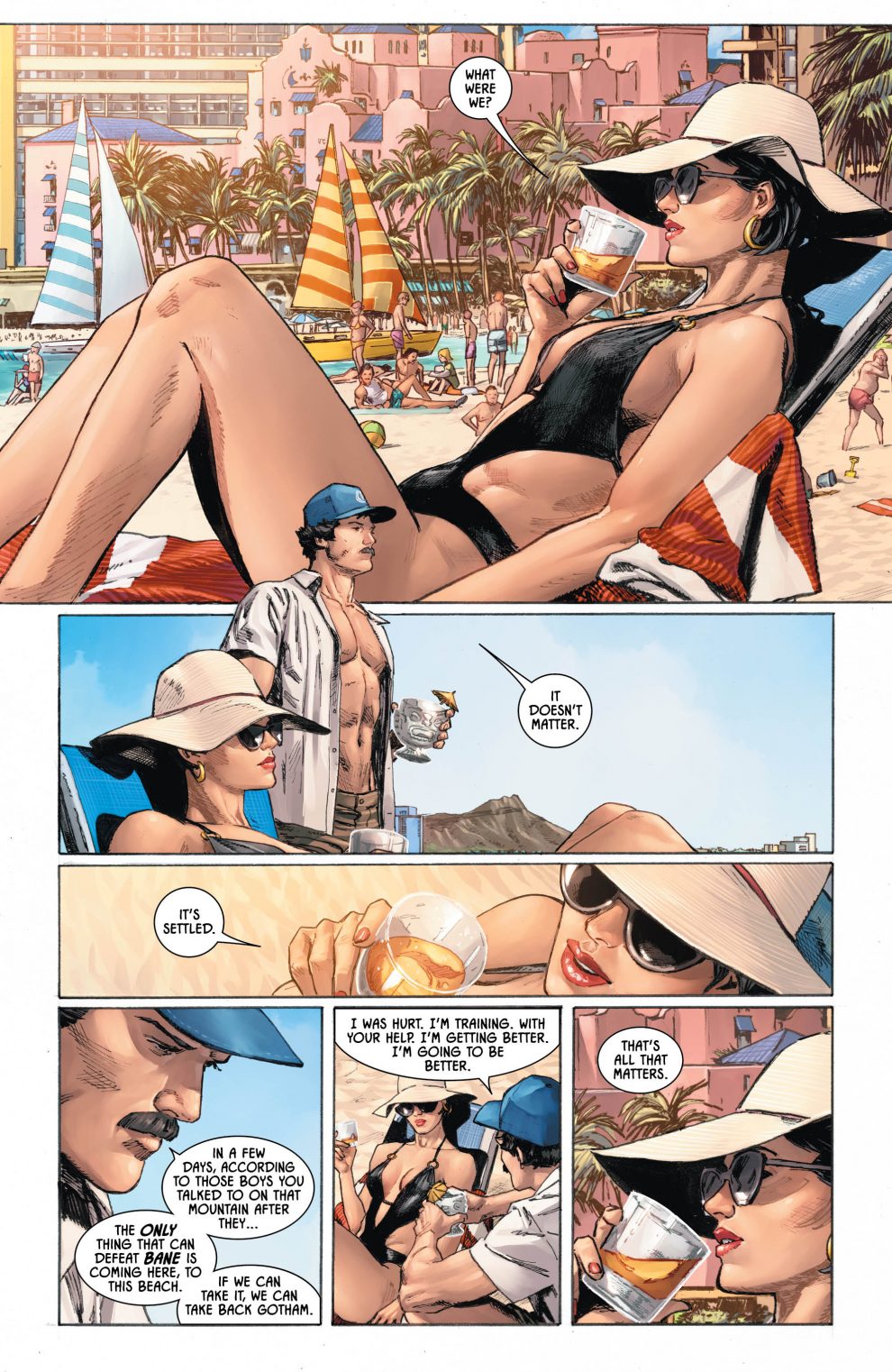 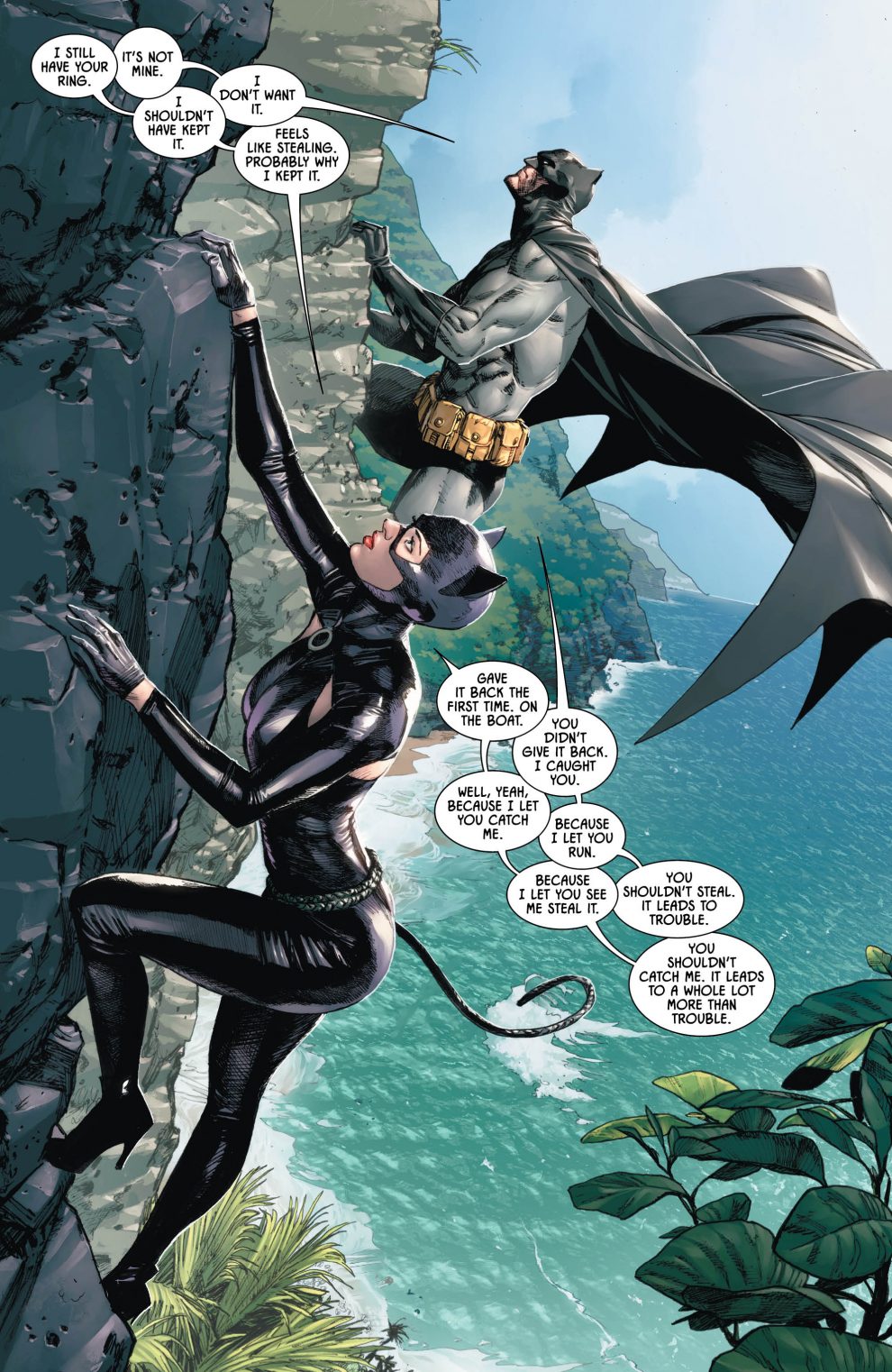 The second element in effect is the interplay between the Bat and Cat. As I said before, there's so much going on here. Delving into their shared history, from their earliest meetings to the wedding that wasn't, back in issue 50, King really pervays the sense that these two are intrinsically linked in a way that goes beyond anything physical, or emotional. It truly is the whole package with these two. A pair of damaged souls that use their respective chosen careers to work through their pasts. King makes it very apparent that despite them being very different in so many ways, they are so well matched. There is an element of tough love here from Selena, as she pushes our Dark Knight to reach his physical limits once more, be the man he once was, injury free and ready to take back his city.

The juxtaposition is so clever, as the narrative flips between the pair in their beach attire, gently reminiscing about the past, and them in full costume, scaling cliff faces and hurling batarangs. The dichotomy of the costumed hero and the person under the mask is highlighted beautifully. There's a life that they could have had together and the reality of the life they are close to having together, and therein lies the tragedy of "never the twain shall meet."

Another hugely impressive issue, showcasing the versatility of the creative team at its best. Batman #78 manages  to cover so much ground without actually having to do a lot. It's a masterclass in character development and hugely rewarding stuff for long term fans. As Tom King's run creeps towards its conclusion, anything could happen.

Once the rebuilt and recovered Batman returns home, you can rest assured that he will be a force of nature. As Tom King has shown us all sides of the Wayne character within this issue, he's creating an engrossing story that's as good as it gets in comic-books right now.