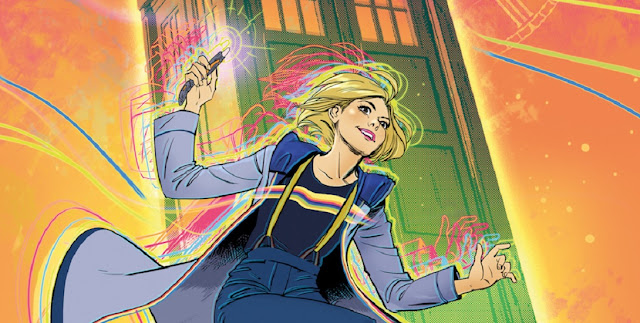 Doctor Who – The 13th Doctor #12 “Old Friends” – Part Four. In issues #1 – #11 of this series; The Doctor and her friends, Yaz, Ryan and Graham, continued their adventures travelling through time and space; righting wrongs, fighting the good fight, and loving every minute of it. After saving a pair of Time Agents from the clutches of an intergalactic collector known as the Hoarder, they went on to help a race of blood sucking aliens evolve and integrate into human society. After taking a break at an interplanetary parade they found themselves under arrest, accused of a crime they didn’t commit. After further investigation the real culprit turned out to be an alien who appeared human, but had two hearts… just like the Doctor.
This led our heroes on a quest to find the real culprit, who the Doctor assumed to be Missy, a regenerated version of her old nemesis the Master. They tracked down the thief’s TARDIS, only to find out that it wasn’t Missy at all, but the swashbuckling Time-Lord adventurer known as the Corsair. The Doctor’s old friend quickly landed our heroes in a heap of trouble, separating the Doctor from her companions and getting both herself and the Doctor captured by the Hoarder. This is where issue #12 begins.

Jody Houser continues to surprise and delight with her unique brand of spot-on, tongue-in-cheek humor, scintillating sci-fi, and heart-warming morality. This is pure Doctor Who, which makes for as entertaining a ride as you could ever wish for. Her villains are nasty, her heroes admirable and her anti-heroes cleverly balanced on a tightrope hanging over the road to redemption. Giving fans an adventure with the Corsair, a figure from the Doctor’s past, is a stroke of genius for long-standing fans, but newcomers to this wonderful world get to meet a great new character from their perspective. I loved the nod to the brilliant episode “The Doctor’s Wife”, which was written by comics legend Neil Gaiman.
Rachael Stott is back! Rachael isn’t the only old friend to make a return to these pages, as we also get to see a pair that have only grown older and wiser since meeting the Doctor and co. I mentioned in my review of Doctor Who – The 13th Doctor Vol. 2: “Hidden Human History” (which collects issues #4=#8 of this brilliant series) that Rachael is an incredible artist… my opinion hasn’t changed. Her action, draftsmanship and character drawing is second to none. When combined with the beautiful color art of Enrica Angiolini, we get a comic that looks and feels like no other.

Comicraft is a recognised, true, tried and tested brand when it comes to comic-book lettering. To have the company’s creator, Richard Starkings, working on a title himself is pretty darned cool. I’ve been an admirer of Mr. Starkings’ work for decades, and fans of the legendary Batman: The Long Halloween, and Dark Victory will know why.

Honestly? Not a single one. Over the last two days I’ve sat down and devoured volumes #1 and #2 of this series (issues #1-#8) and then the single issues #9-#12 and I’ve loved every second. This creative team is one that consists of some of the finest comics professionals out there, and they clearly love what they do.

Pick up the collected editions, track down the individual issues, or get them from the digital comics specialist of your choice… but buy this series!
I really can’t put it any plainer than that.