Review: 'Preacher' Season 4 Episode 10 “The End Of The World” 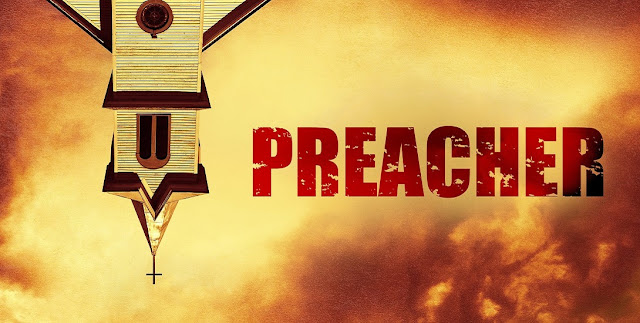 "The End Of The World"


“The End Of The World” is a fun, action packed, thrilling, and horrific, yet emotional and poignant ending, to a series that’s entertained me and millions around the world for over four years. 2019 saw the end of Game Of Thrones and the DC related shows Gotham, Swamp Thing, and iZombie too. I’m not going to harp on about how rushed the final season of GoT felt, because I thought otherwise it was pretty good. Swamp Thing never should’ve been cancelled in the first place, iZombie went out on a high, and Preacher…
Preacher nailed it.

This season and series finale gave us Jesus vs Hitler, an angel and a demon vs a saint, Cassidy vs Tulip, and – the main event – Jesse Custer vs God… and that’s not all. We get happily ever afters, bittersweet as they may be, and even Eugene gets an off-screen send-off that no-one deserves more. I don’t believe that there’s ever been a more blasphemous, irreverent, out-of-left-field show like this one ever before… and it’ll be a long time until we see its like again.

Whoah, boy… I could be here a loooooooooong time. Instead, though, I’ll summarise. “The End Of The World” had a stellar script, brought to life on-screen and directed by the man who wrote it. We got some incredible performances by one of the greatest ensemble casts ever assembled and everything just worked. I’m really going to miss Cassidy, Tulip, Eugene, Humperdoo, Starr and, of course, Jesse. These characters may have lived incredibly messed up lives, but I at least know that they went out in a way that was so fitting.
I couldn’t have written or even imagined it better myself.

Preacher is over. That’s sad.

Over four years and 43 episodes this series has shocked and delighted me, in equal measure. I’ve laughed out loud, sworn, jumped out of my seat, felt repulsed and delighted. The Beatles once said “All you need is love”, but sometimes you have to ask the question “What if I choose hate?” Well, I’ve loved this series and will really miss it, but thankfully the Arrowverse shows are all returning, so I won’t have a chance to mourn for long.
Farewell, Preacher. Rest in peace.