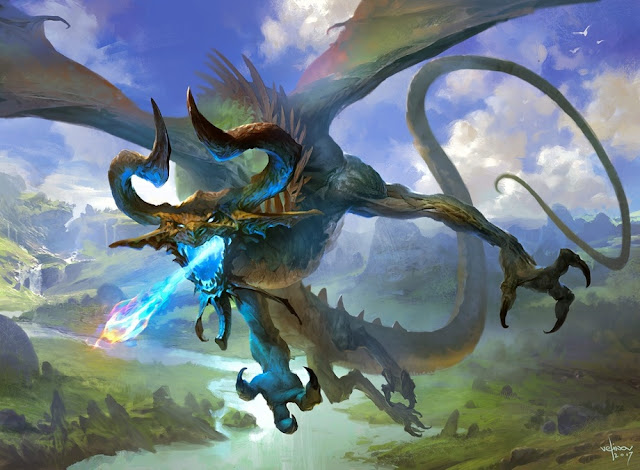 A few short weeks ago, Wizards gave the players of Magic a real gift: a new format. Pioneer is the newest Nonrotating format for Magic the Gathering. All standard legal sets from Return to Ravnica to now are in the Pioneer landscape. Regular bannings to help shape the format have already slain Saheeli/Cat combo and curbed Mono Green from their turn 3 Ulamog and the needed protection. The Fetch Lands from Khans of Tarkir were never legal in the format, to keep mana bases honourable in this brave new world.
Decks like Izzet Phoenix, Hardened Scales 'Affinity', Nexus of Fate, and Mono Red have all risen to the top of this new format. But for me, I'm playing something a little bit different. 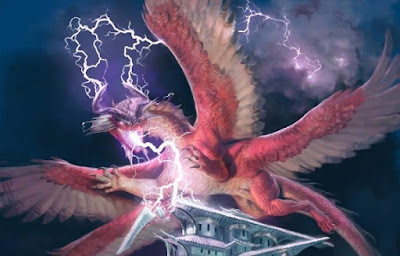 There's little more iconic in the fantasy genre than a Dragon. The great, powerful reptiles with beating wings, bombastic personalities. In the game of Magic, Shivan Dragon has been capturing imaginations and taking names since the very beginning. The Dragon creature type has only become stronger in the years past, and Dragons of Tarkir brought a few interesting interactive spells, all mixed together with some new pieces to make a powerful, flavourful Control Deck.
Grixis Dragon Control - aside from having a really awesome name -  is one of the more interesting control variants a player could use in the emerging Pioneer format. It has the unique curve of starting as Draw-Go, pivoting into Tap Out Control. Or with a healthy starting hand of Discard spells, it plays like a Tap Out Control deck. Either way, the early turns are spent getting your opponent to spin their wheels and grind them of cards in hand and resources, then dominate the late game with giant Dragons. 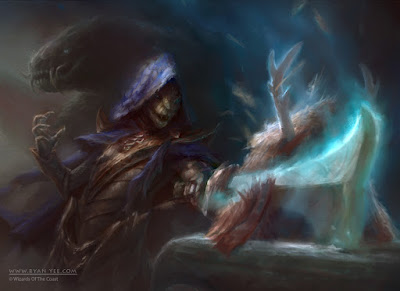 In a Dragon based deck, a card like Silumgar's Scorn is often original Counterspell, and in some instances in the very early game, it works perfectly like Force Spike. Draconic Roar is a serviceable burn spell which eliminates most early game creatures, with additional face damage to boot. Hero's Downfall is a strong upgrade to Murder and likely more easy on the mana than Dreadbore. When things get too far, or a tokens player taps out for a Secure the Wastes then taps those tokens for a March of the Multitudes, Crux of Fate is the one sided board wipe, this deck barely deserves.
The most effective removal spells are the targeted discard. I personally hate the concept, but it's hard to ignore the raw power of Thoughtseize and Thought Erasure. Erasure can take any card and gives a control deck the needed card selection in the early terms. Then there's Thoughtseize. The card that makes me think they pushed the boundaries back to RTR from the original fan format, Frontier. Thoughtseize is the saving grace of the format, snapping down bizarre combo decks and card hungry Phoenix decks from as early as Turn One. The mana base in my version has a heavy lean towards Black to support a Turn One Thoughtseize as often as possible. 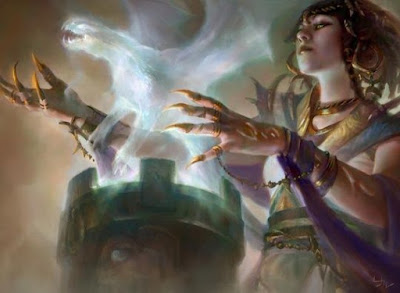 As the game goes on, Dig Through Time is the refill spell the deck deeply needs. In the late game, casting it for Blue Blue is amazing, leaving you the mana for Scorn or Downfall. The deck doesn't care about Exiling spells or Surveiled Lands to Delve, but it's good to leave creatures in the Graveyard. They can possibly come back!
Now the moment you've been waiting for. The Dragons. I had a few options in these slots, and a consideration for how many to play. They're not cheap in mana, but the late game threats are hard to ignore, providing a real sense that they need to be dealt with. 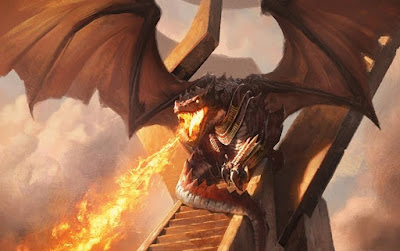 Three Thunderbreak Regent is the start of the curve. 4/4 for four mana with flying is already on curve. The added bonus of bolting extra damage at an opponent really weakens removal pointed at any of your finishers. Three Glorybringer is a haste threat, one that comes down fast, hitting hard, and Exerting to remove a possibly big threat on the other side of the board. The Legendary Dragons are where the deck come alive. Kolaghan is the blanket team pump that can add four or six extra power to an all in swing, checking with each Dragon that attacks. On a similar vein, Silumgar wipes most small opponent's boards, giving -1/-1 to each enemy creature for each swinging Dragon.
If you're in Grixis colours, you have to at least consider The God-Pharaoh. Nicol Bolas, the Ravager is potentially the strongest card in the deck. It appeals to the decks's early game plan, forcing an opponent to discard a card. If played on curve, after some number of Thoughtseize and Thought Erasure, your opponent has been officially buried in card disadvantage. If Bolas flips into his Planeswalker form, he does all of the things. Keeping your hands flush with cards is always welcome. Dealing 10 to something kills near everything in this format. Reanimating one of your dead Dragons or one of their best creatures or Planeswalkers. The Ultimate is a funny, instant win button that is funny in the slimmest of instances when it happens. 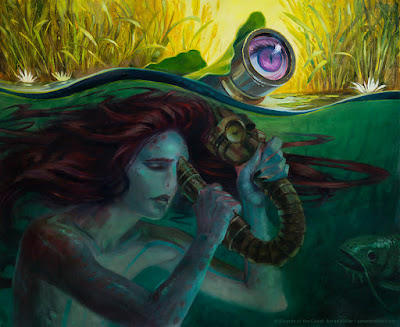 My take on the Sideboard is entirely speculative, I build mine to be catch alls for most scenarios and matchups. I'm interested in two copies each of the hozer cards from M20: Aether Gust, Noxious Grasp, and Fry. Negate is the most played Counterspell in the history of Magic, and I will have at least two in a Blue Sideboard almost forever. Decks like Izzet Phoenix and variants of Blue/White Control are very dominant, and their dependence on generating card advantage makes Narset a suitable sideboard hozer. As for aggressive decks, three Anger of the Gods works very nicely. A deck like this operates well with knowledge, and dealing with haymakers like Walking Ballista - Sorcerous Spyglass is always a strong version of Pithing Needle that grants information.

Anger of the Gods x3

In all, the deck plays like classic control. Answering threats early, then presenting must-answer threats while your opponent runs on fumes. I look forward to the forces of Draconic Magic in the early days of this new Pioneer. 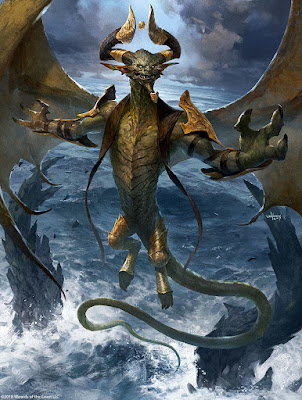