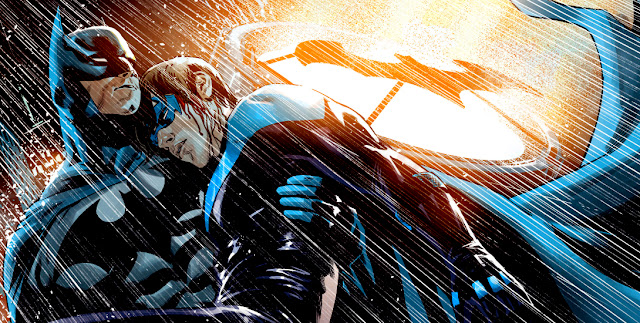 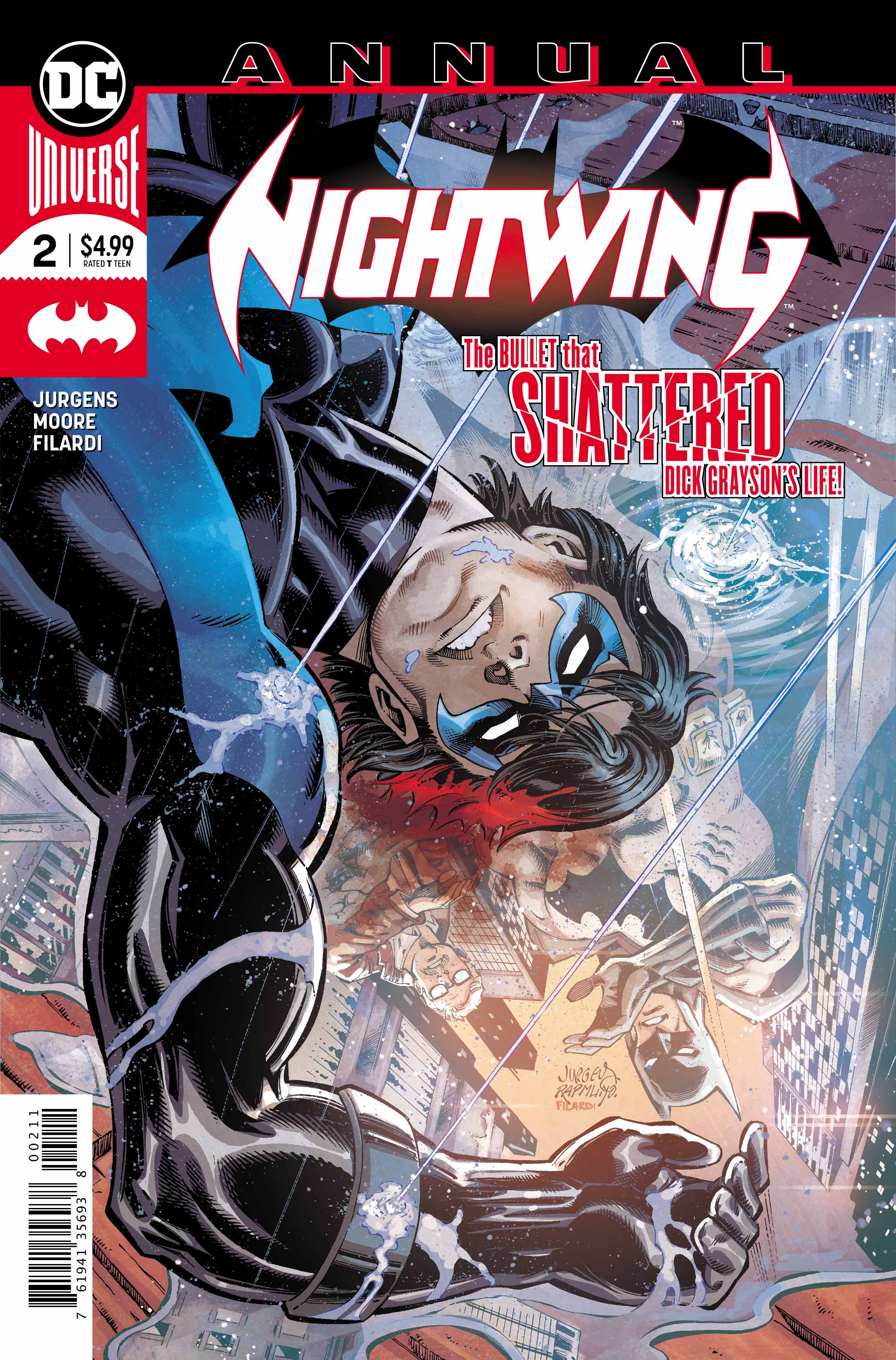 Nightwing Annual #2 follows on directly from the horrific events at the end of Batman #55, and before the start of Ric’s new life, as seen in Nightwing #50. This issue is so well crafted that it fits in anywhere between then and now… or at the point Dan Jurgens took over as writer, before the “Year Of The Villain” or even after issue #65, and the most recent arc.
If anyone’s still on the fence as to why Ric so vehemently rejected his past as a costumed crime-fighter after being shot by the K.G. Beast, this issue should put any lingering doubts to rest. The way that Dan Jurgens writes the character of Nightwing is so true to his 79 year history, and so respectful of it, that all of Ric Grayson’s decisions ring incredibly true.

I fell in love with Travis Moore’s version of Nightwing after seeing his brilliant art in the Nightwing Vs Hush wedding prelude, which I also reviewed. From that time ’til now, Mr. Moore has become, in my opinion, one of the finest Nightwing artists of all time. For me, his take on the character is right up there with George Perez’s original, and Scott McDaniel’s legendary 9 year run between 1996 and 2005. 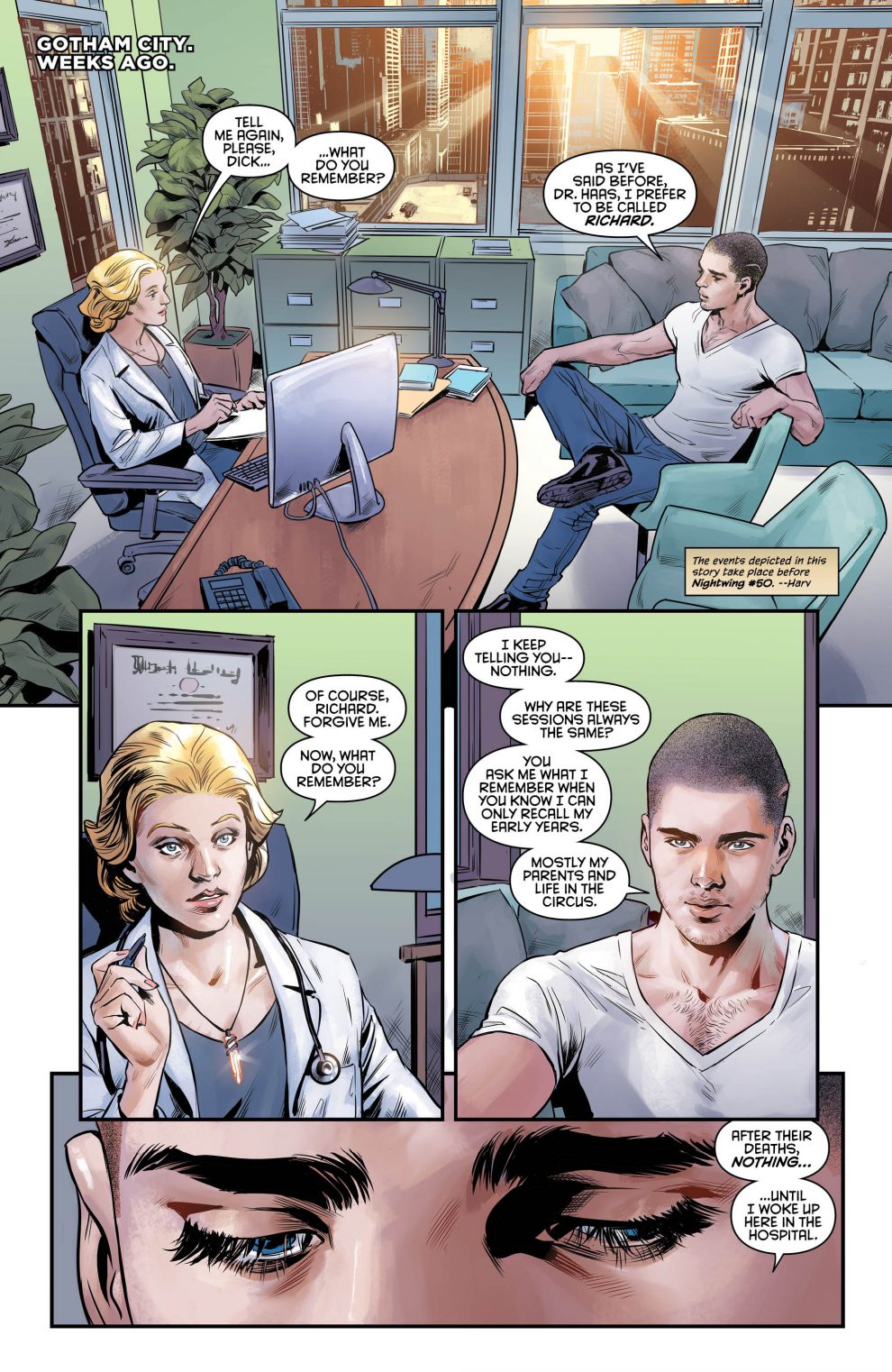 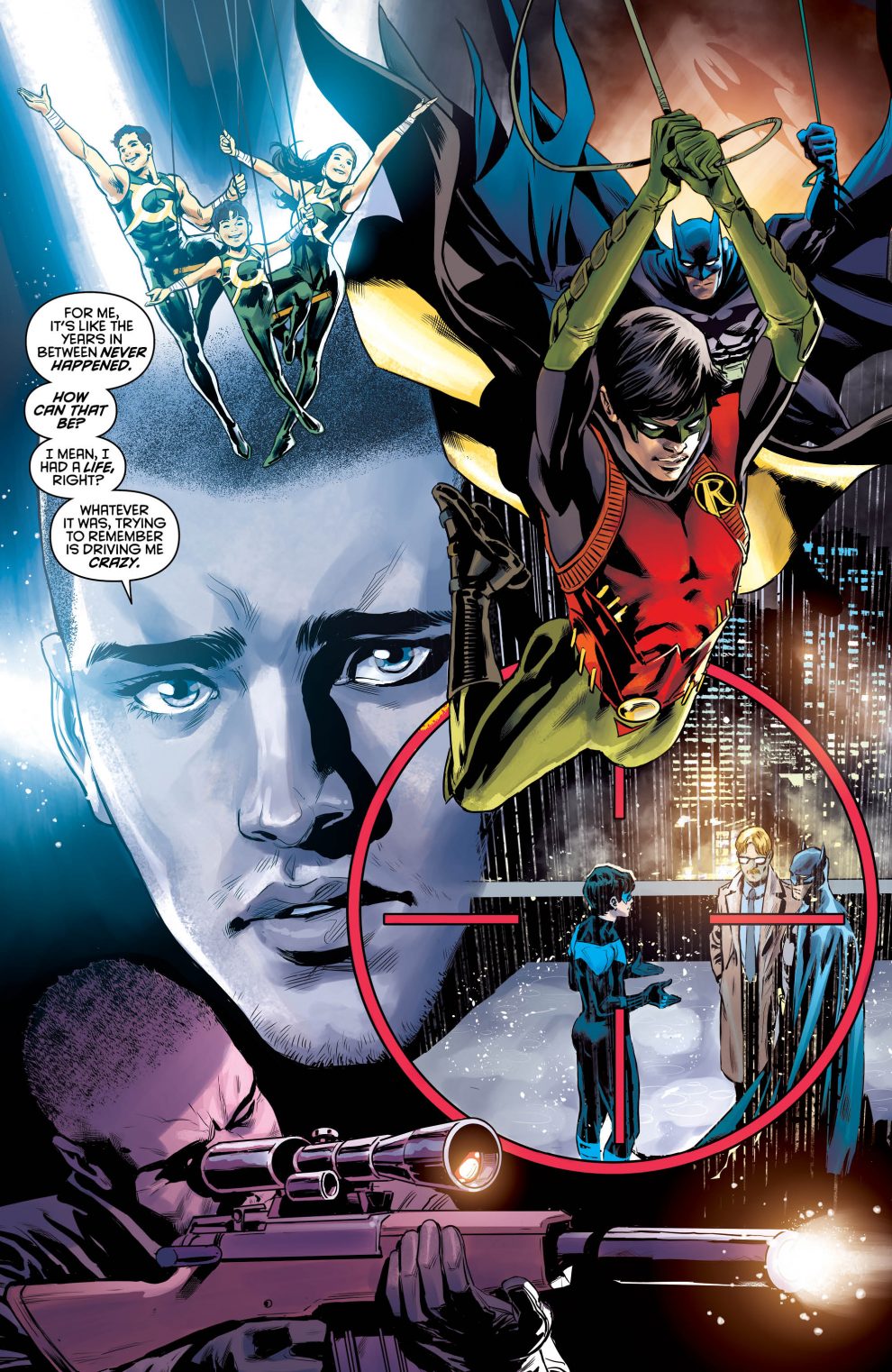 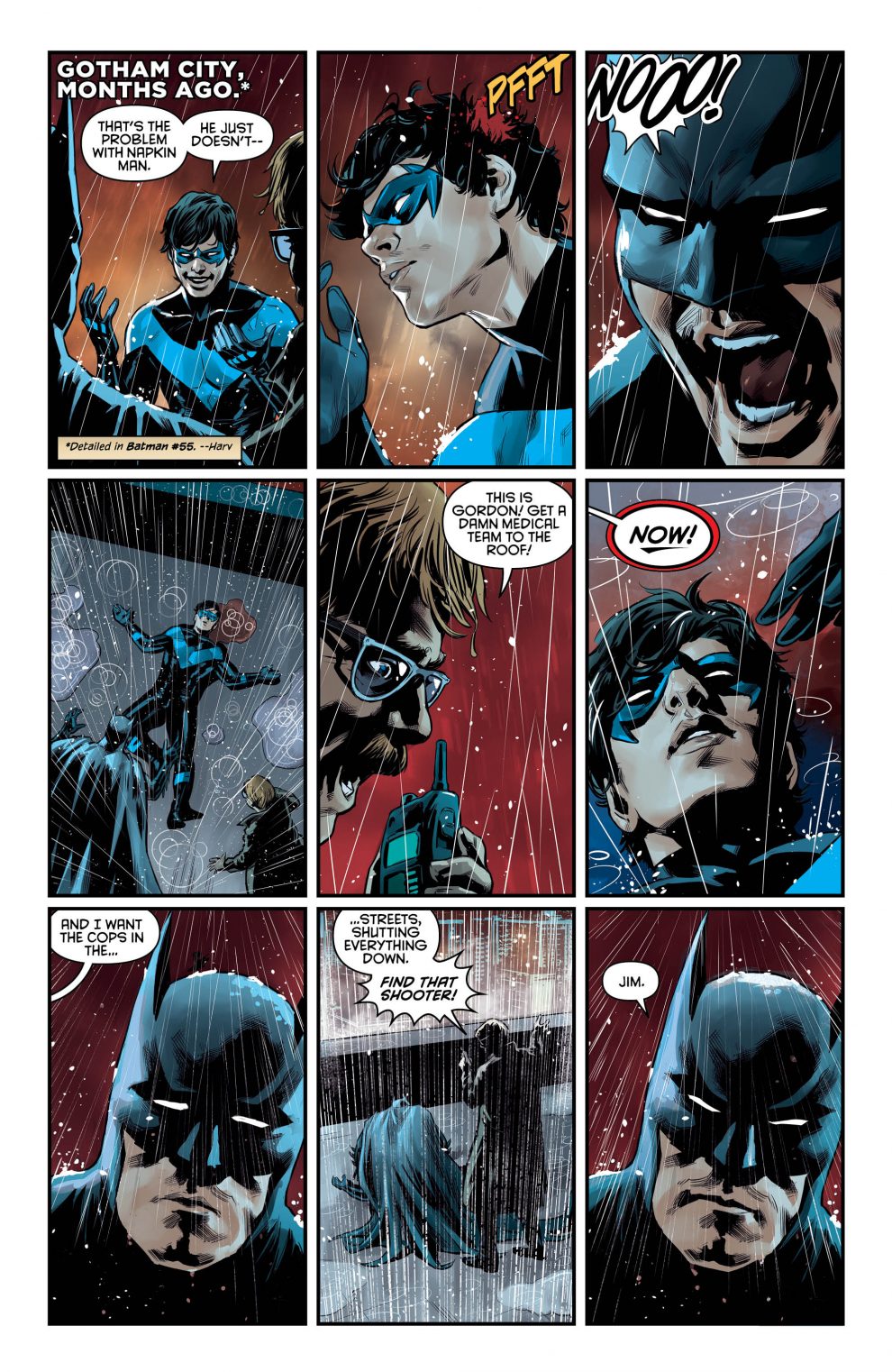 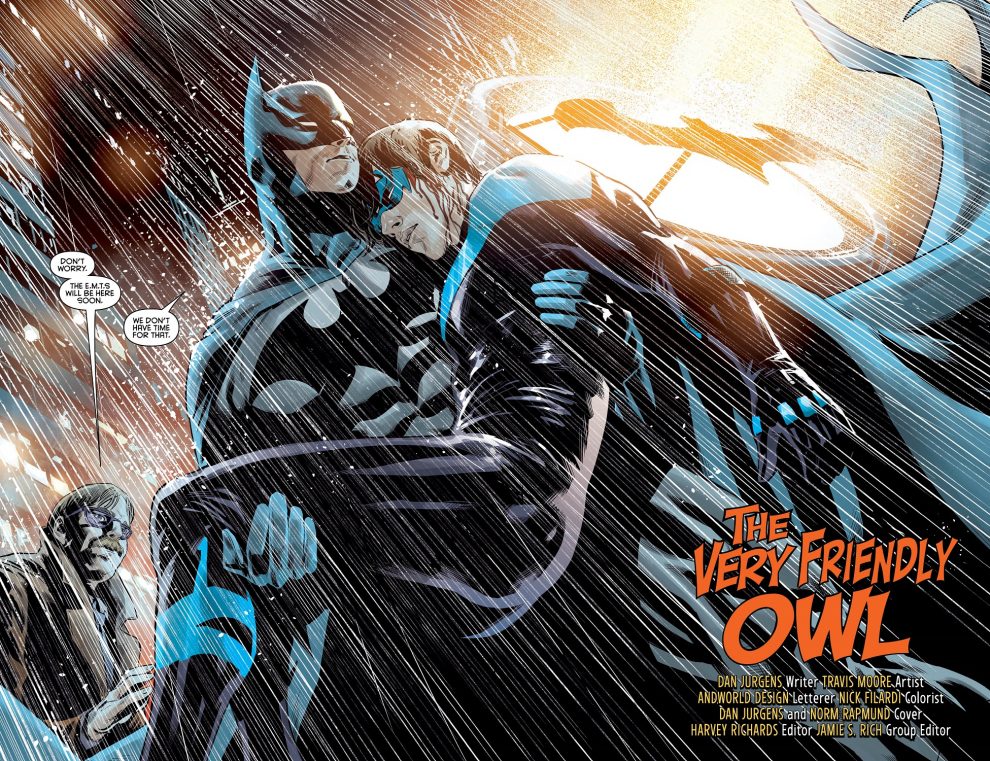 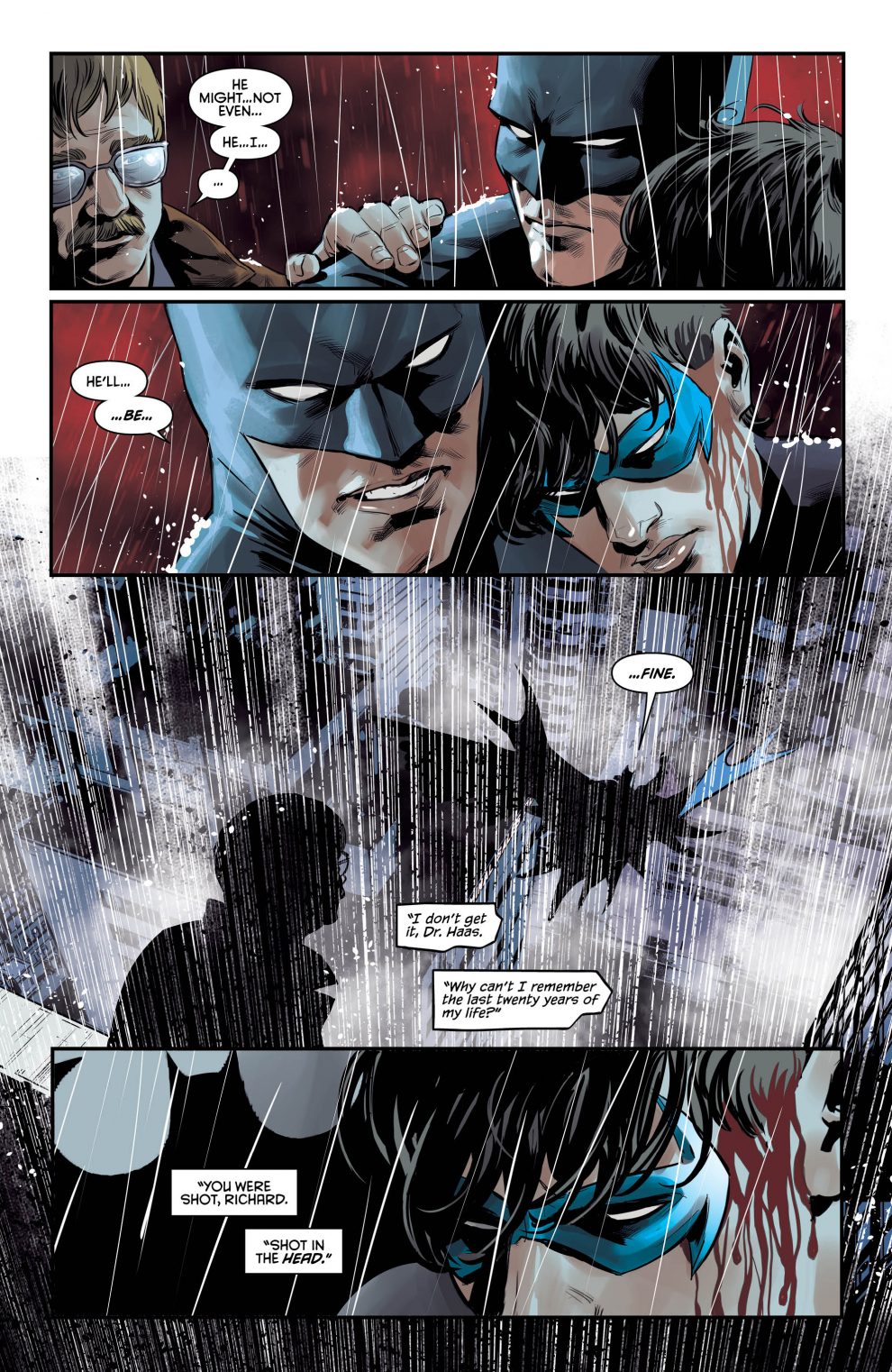 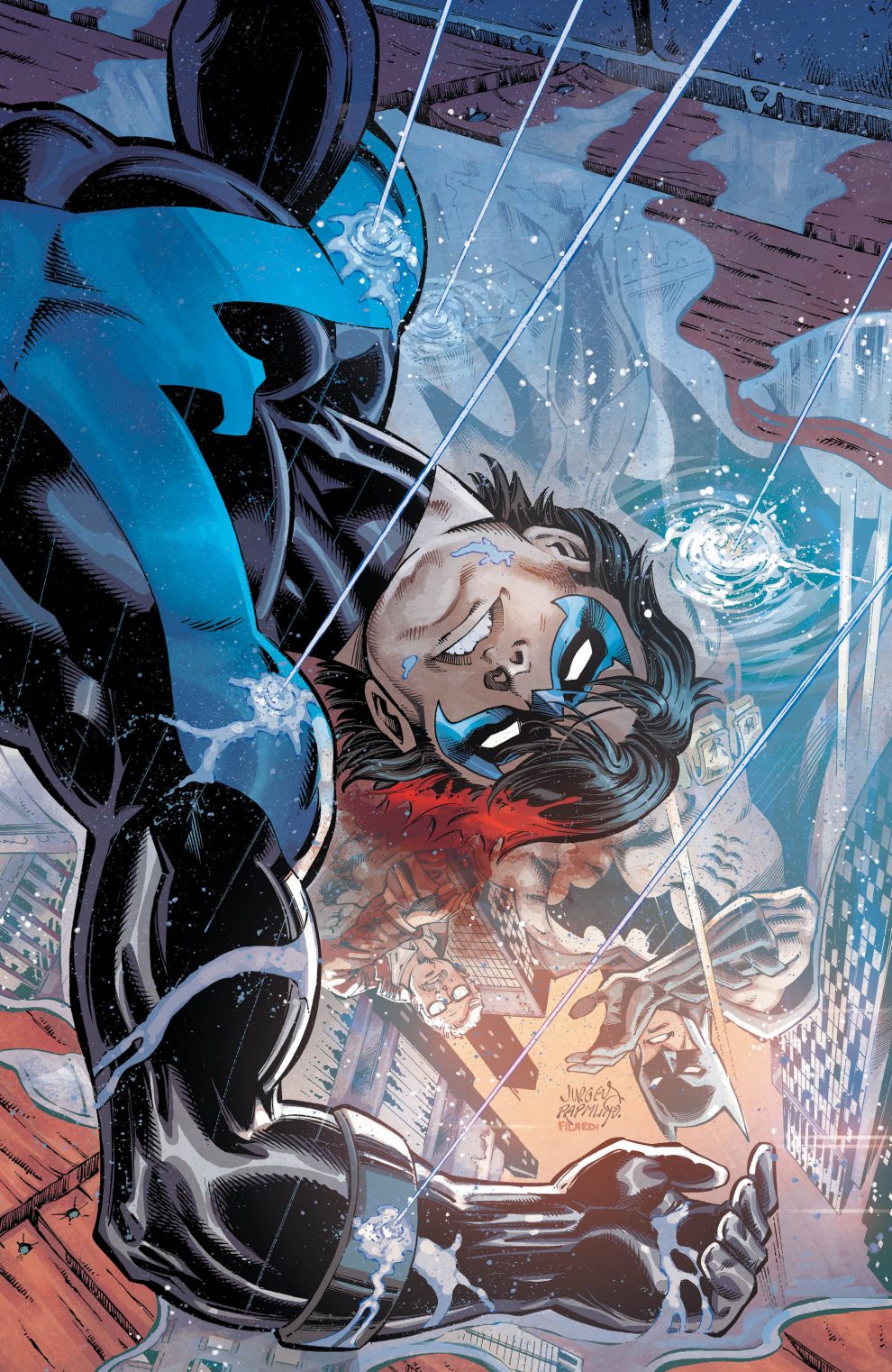 The art in this issue is simply gorgeous, which is made more remarkable by the fact that there are no fights, explosions or flexing biceps to be found anywhere in its pages. Travis Moore and Nick Filardi have provided us with an emotional character piece, but one so entertaining and well put-together that I didn’t miss the action for a second. We get to see the Bat-Family we know and love experience every emotion there is; rage, disbelief, shock, heartbreak… all of it. The characters are so well written and drawn that the reader can’t help but feel all of it.
AndWorld design didn’t get to cut loose with loud sound effects, screeching tires or explosions, but every page read beautifully and the story flowed thanks to their crisp, well crafted lettering.

This issue was bordering on faultless, only a couple of things let it down. For starters; Dick Grayson’s parents were not shot and killed, their trapeze ropes were tampered with and they fell to their deaths… unless I missed another reboot of Nightwing’s origin that nobody told me about?
Also, he lost twenty years of memories? I always thought that Dick was around 10-12 when his parents died, which would mean he’s 32 now? I always guessed that Bruce was around 25 when he took the original Robin in, which would mean that he would now be 45. Looking at the young Mr. Grayson in this issue he looks about 8 at the time of his parent’s death, but that doesn’t quite jibe either. Personally, I’d take it that the psychiatrist was rounding up, and it was closer to 15 years. That would make Nightwing around 25 – better – and Bruce 40 – a little easier to handle.
Nit-picking aside, Nightwing Annual #2 was a superb read and an essential chapter in the life of Richard Grayson.