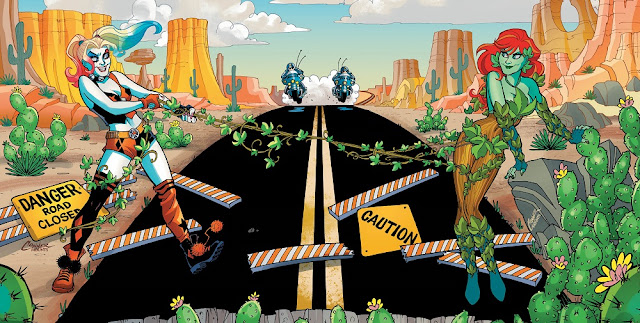 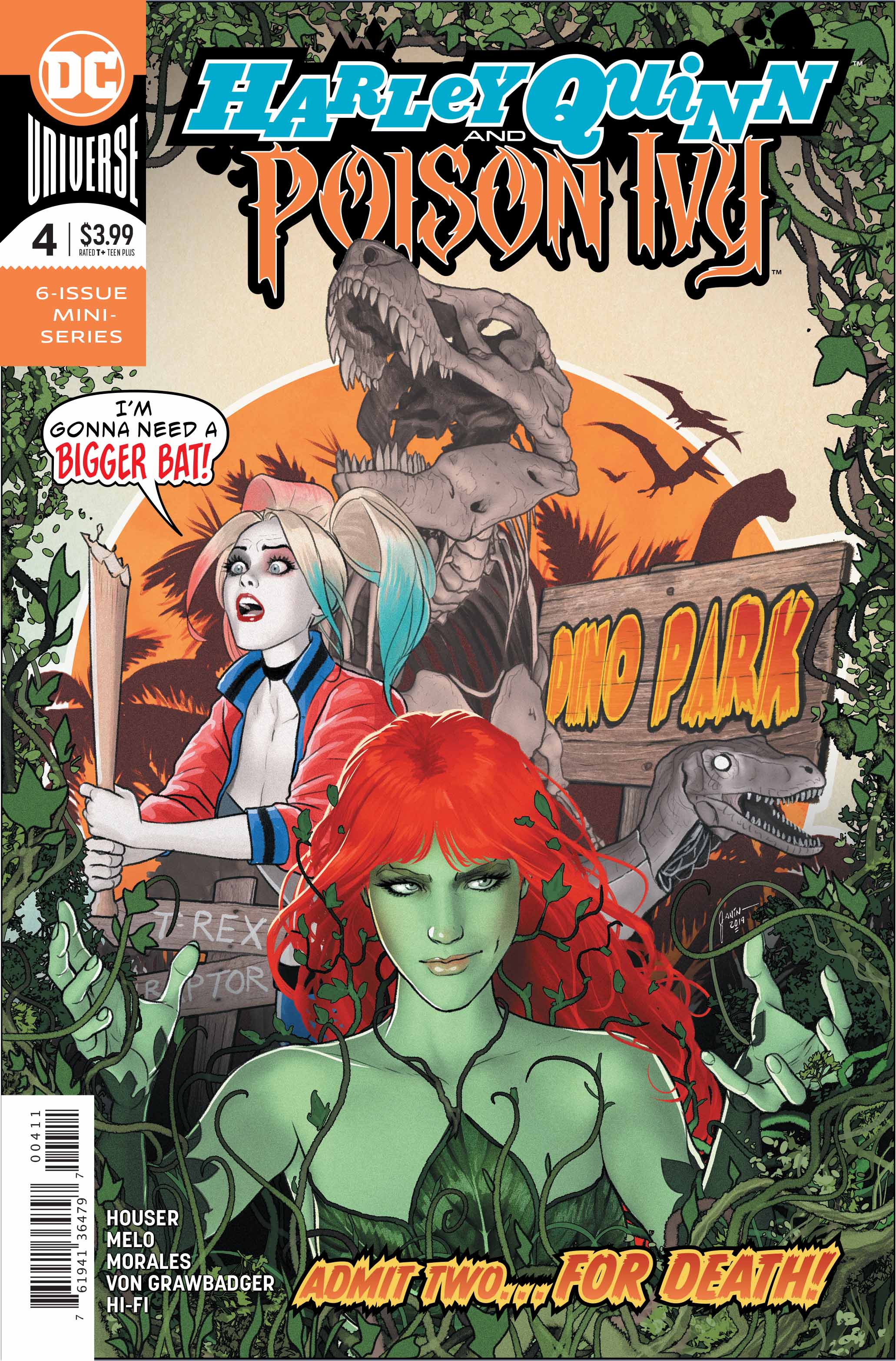 Review by Fay Clark
What a trip so far. Even more tripping in Harley Quinn and Poison Ivy #4, as we go on a road trip. Driving around with Harley and Ivy, what could possibly go wrong? Oh, I don’t know, but that turn off over there looks interesting, maybe we should stop in for a spell… cue creepy music.
I mean listen, this mini series is blowing me away! So far we have had a mean plant dude, some explosions and many a fight. We’re only just over half way through the series and Jody Houser is really batting 100 with these plot lines and characterisations of Harley and Ivy. Every time there’s a new issue out, I get excited. 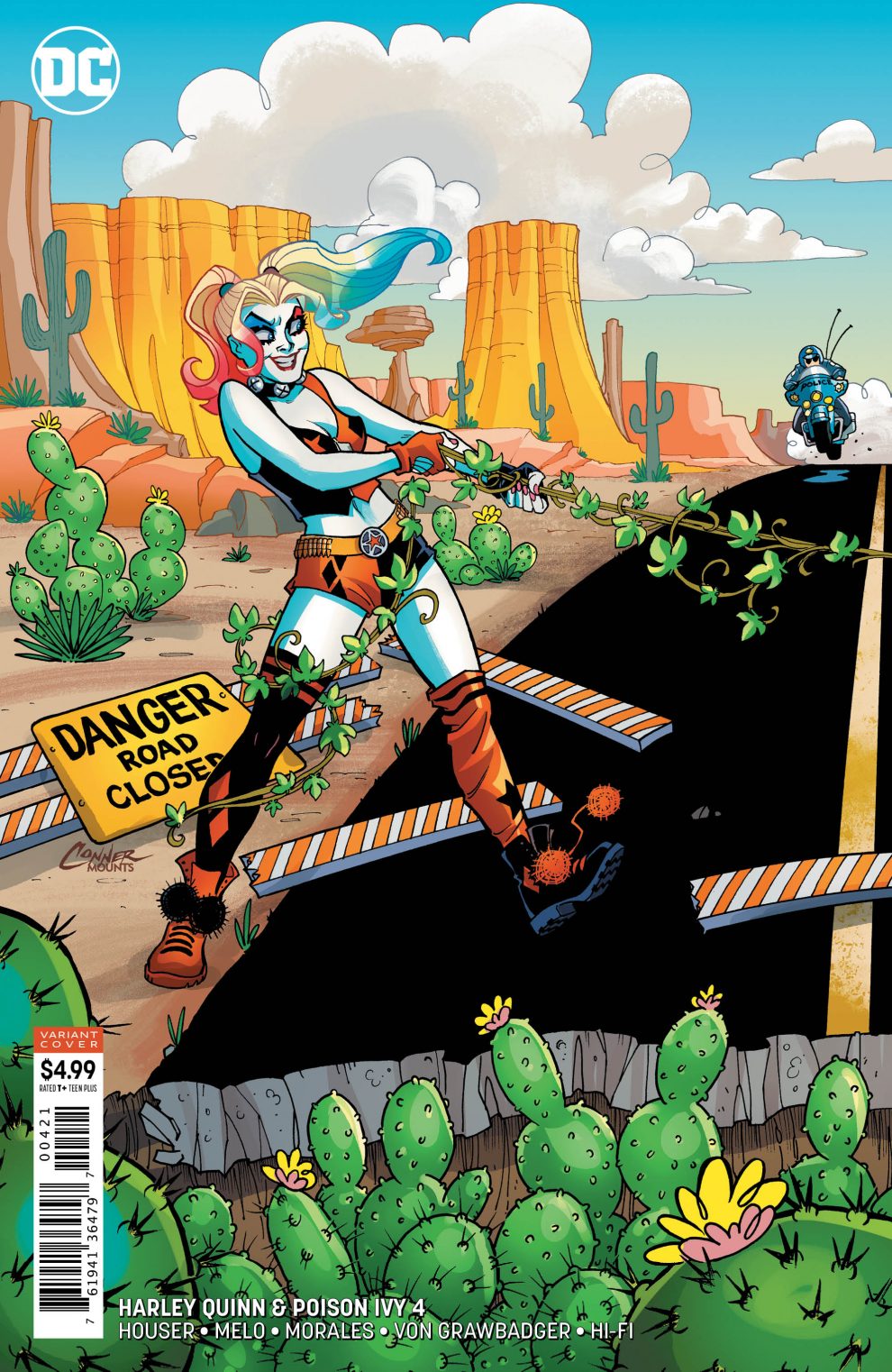 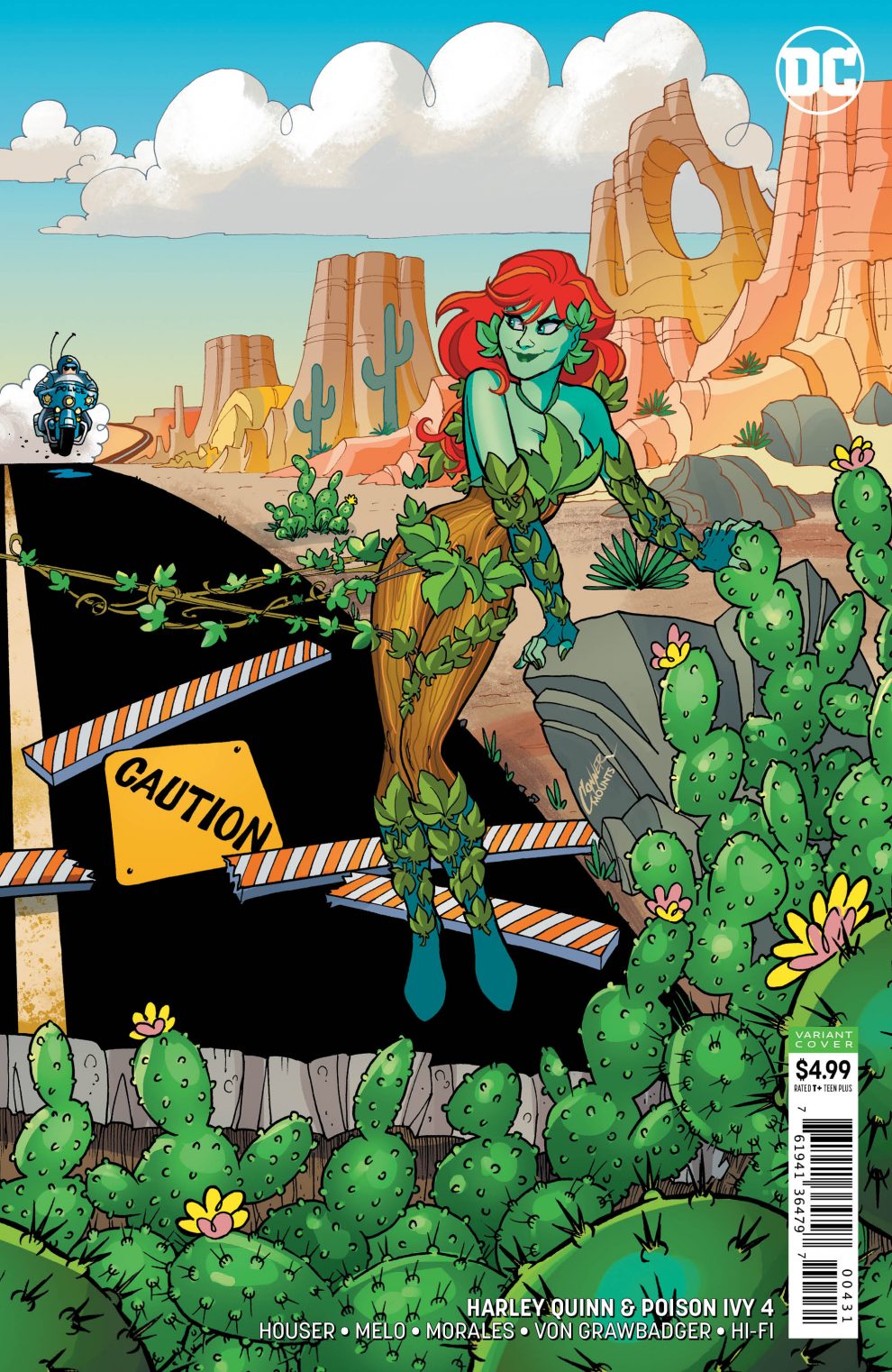 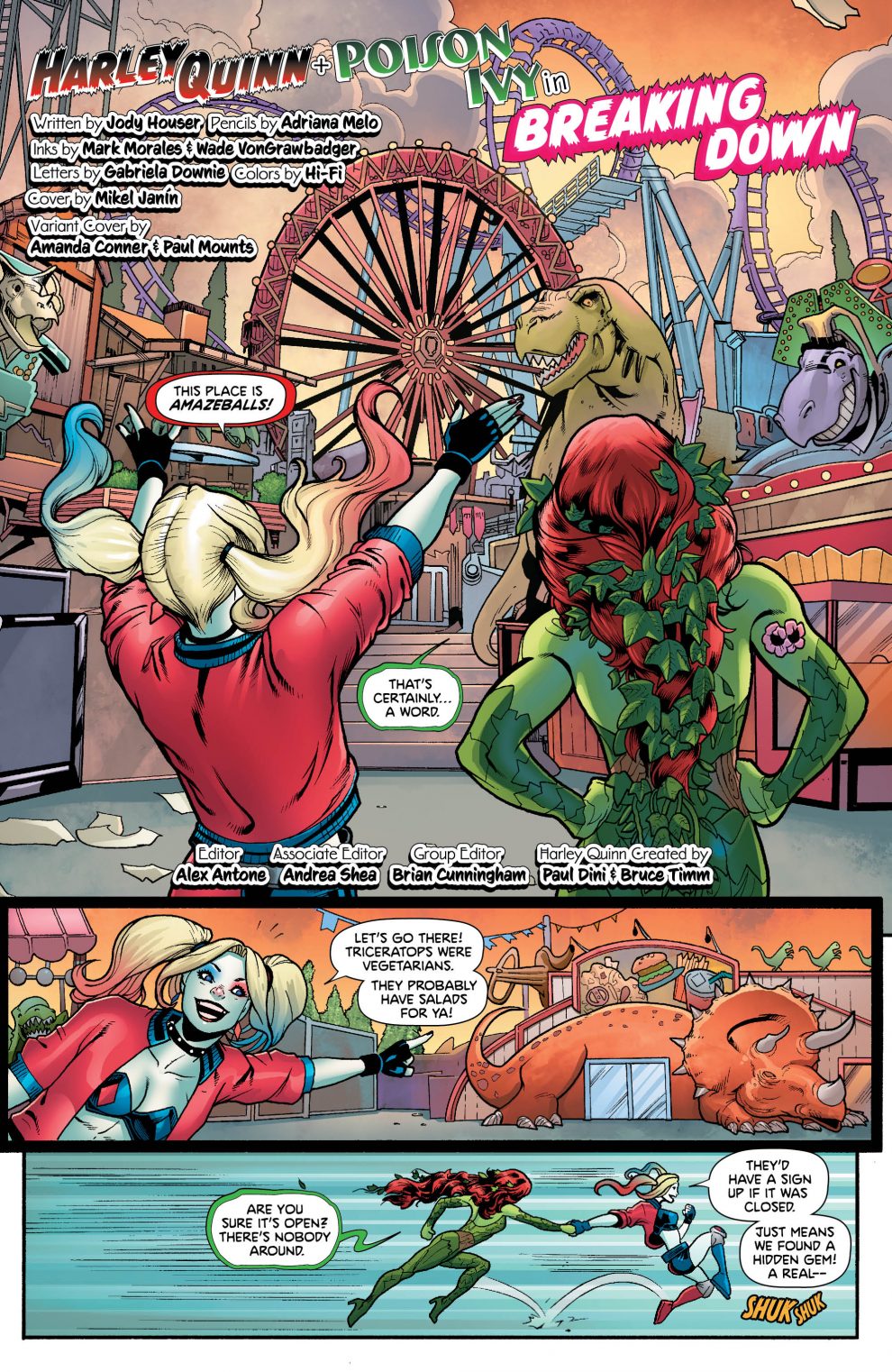 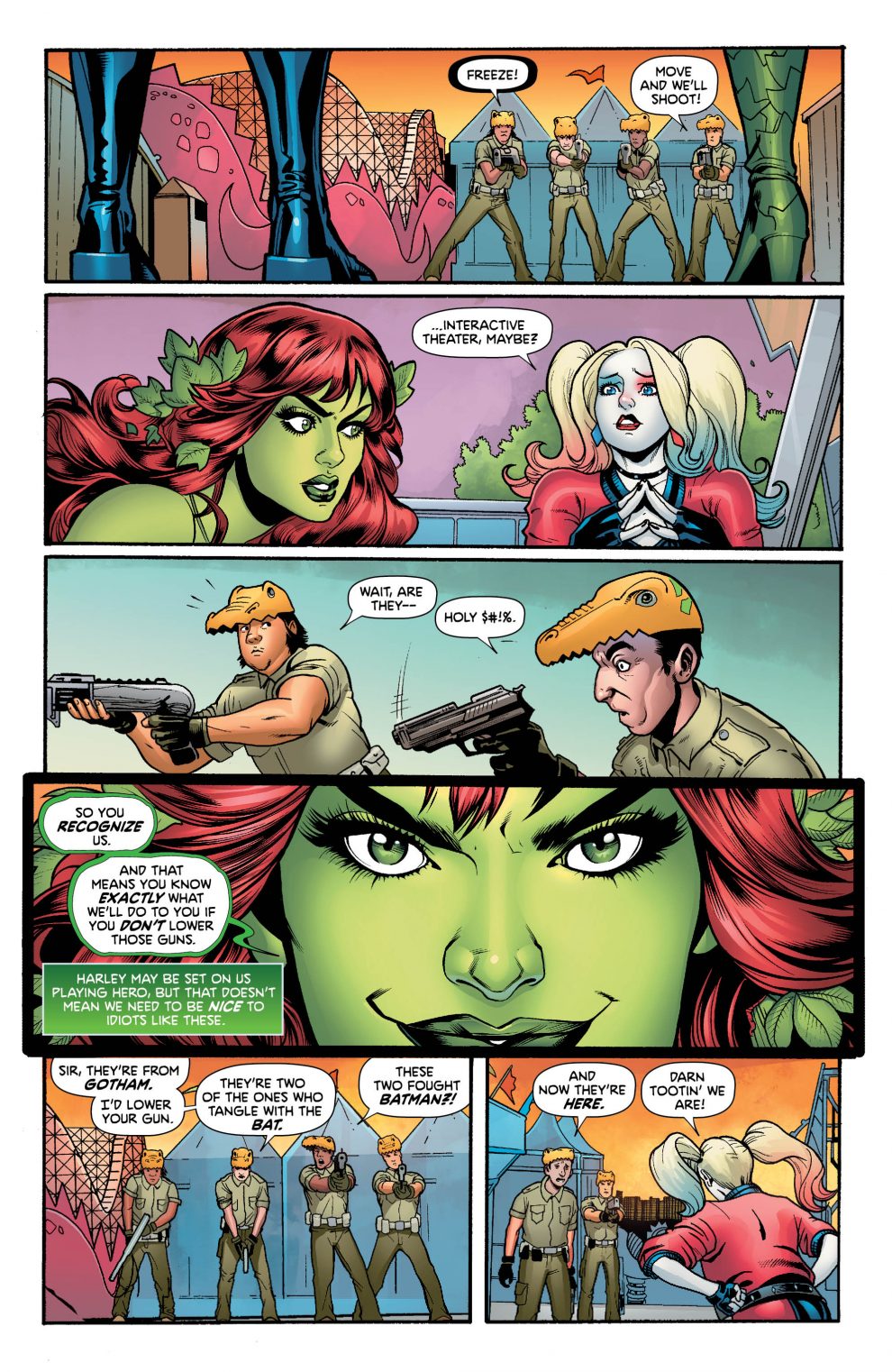 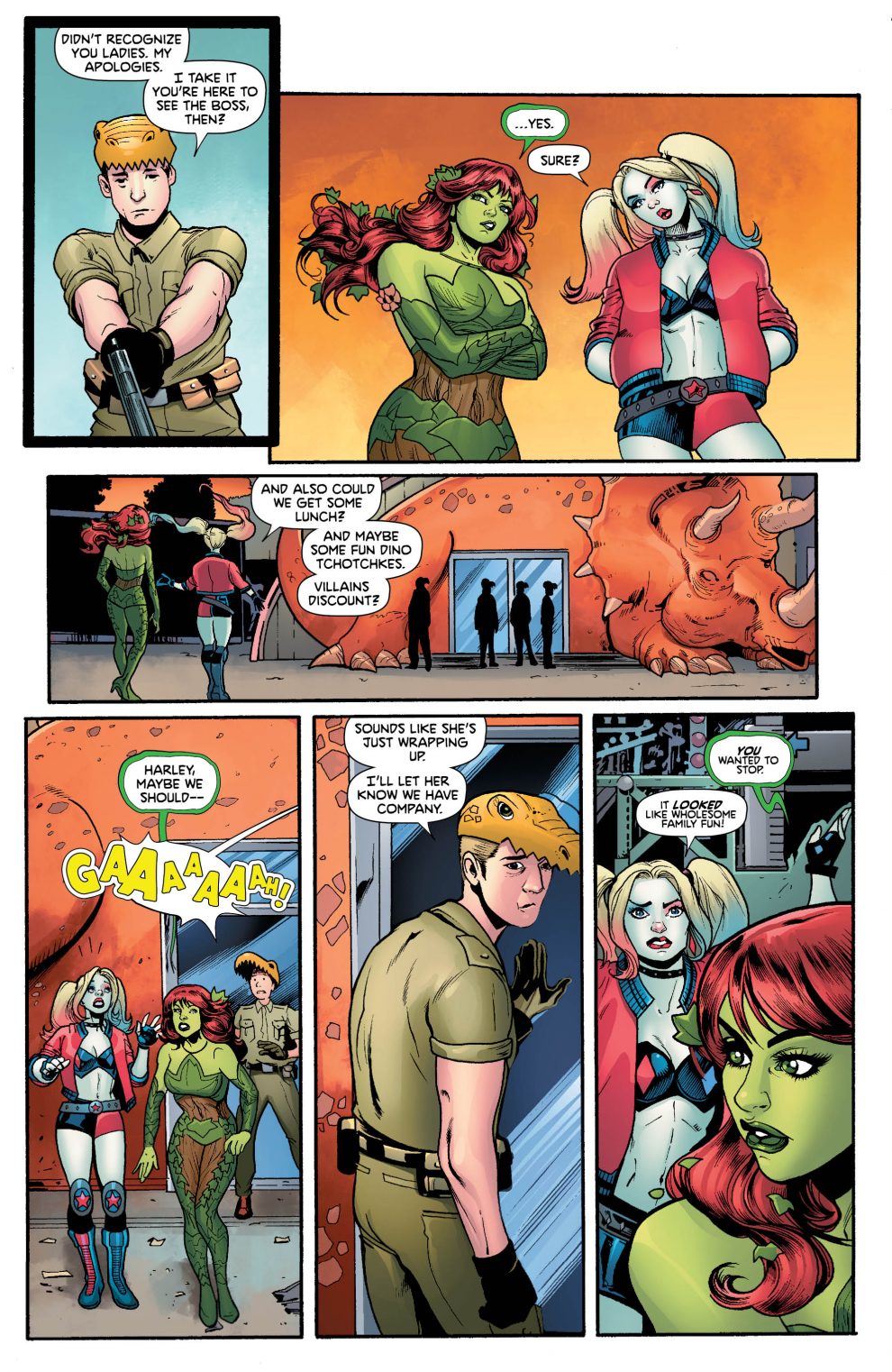 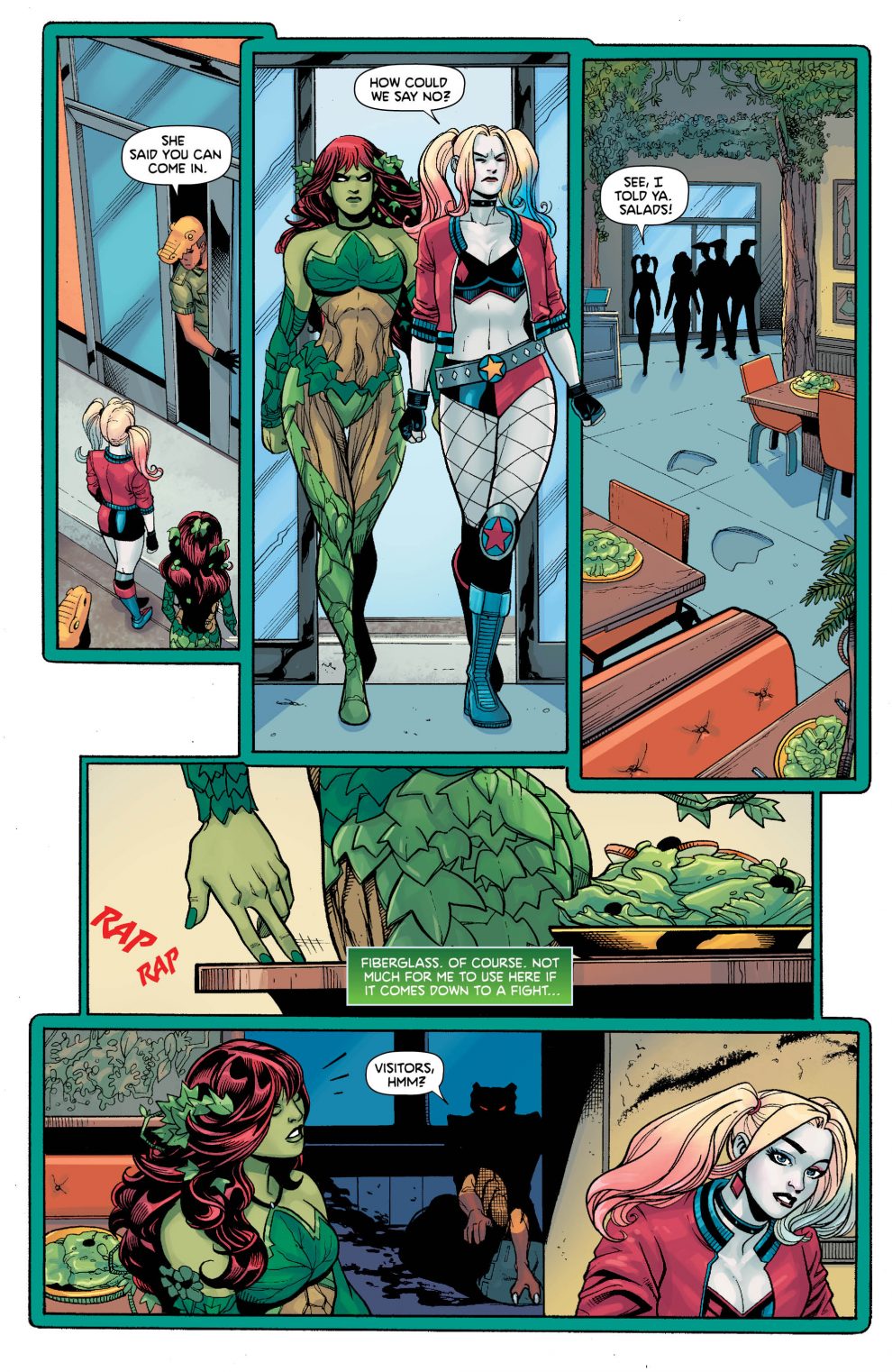 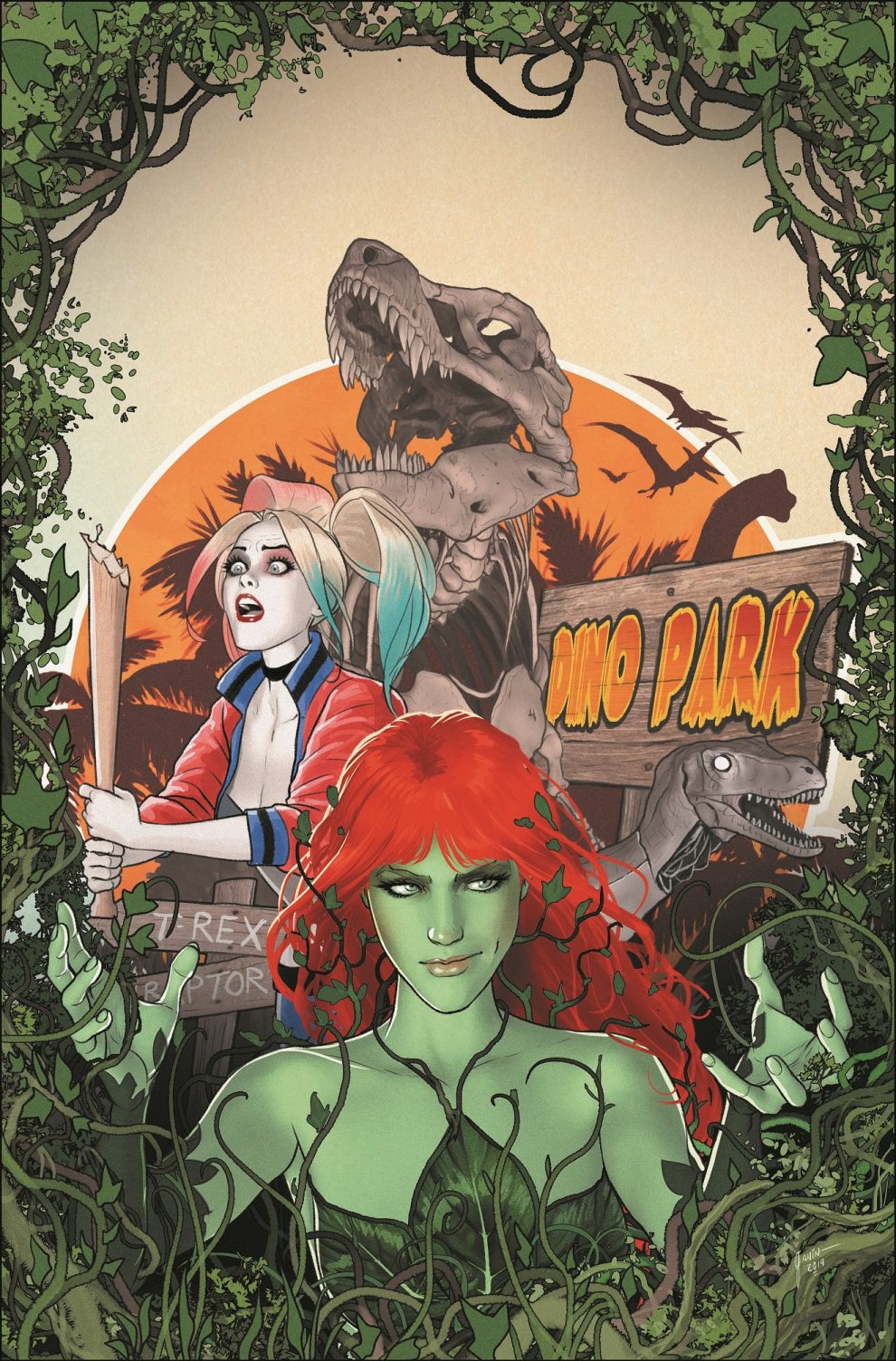 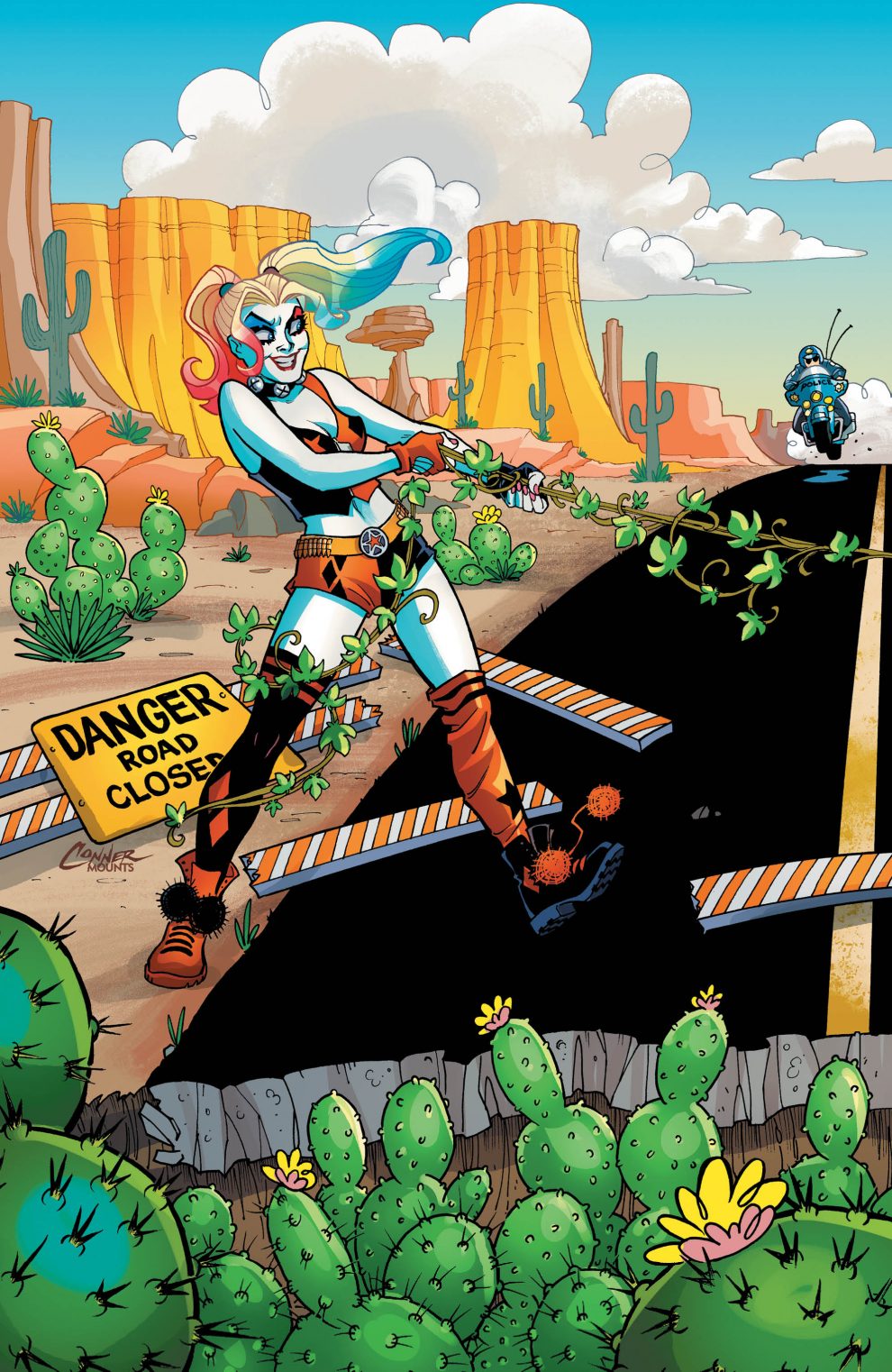 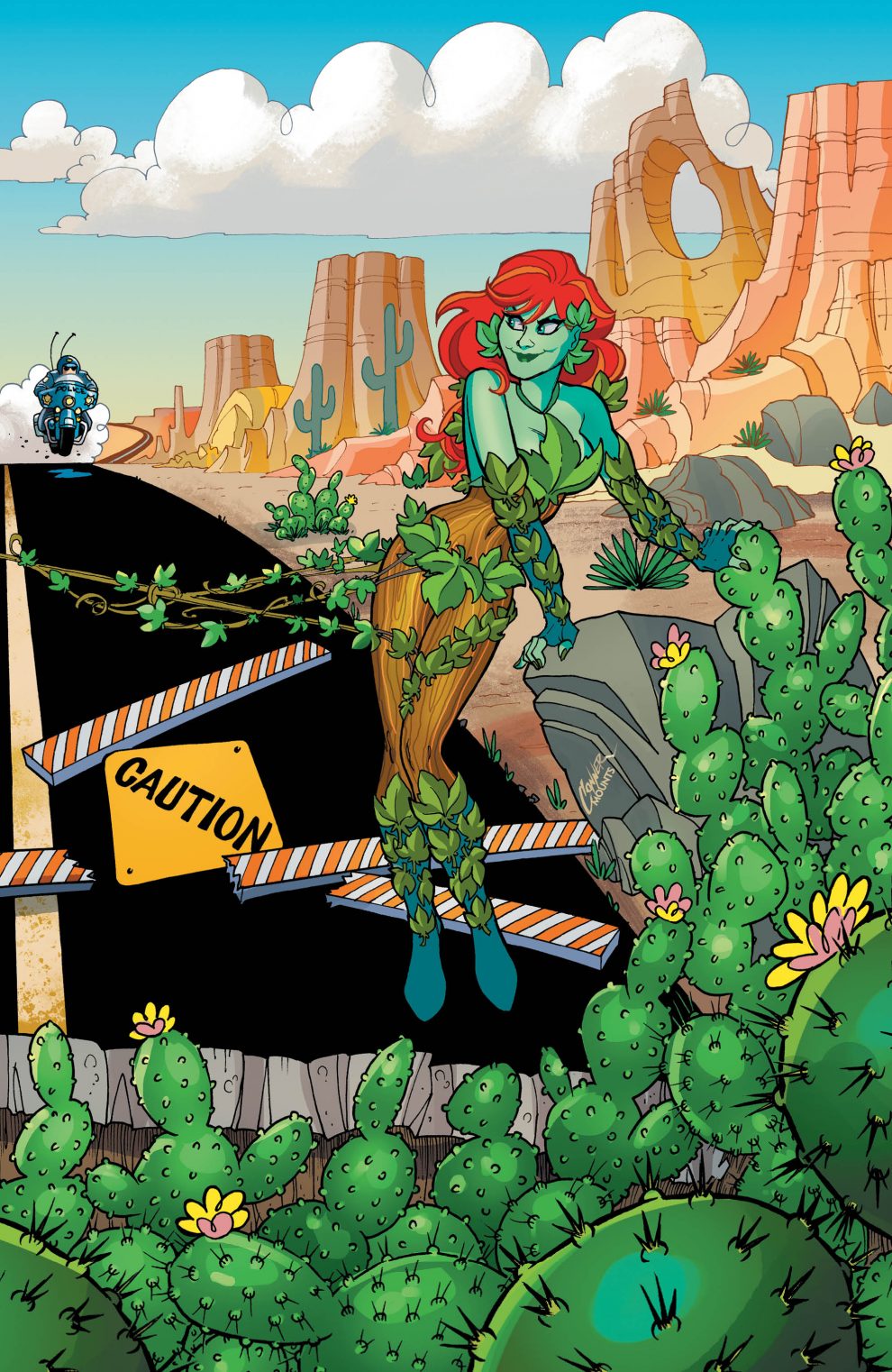 Where does the General keep her Armies? Up her Sleevies!

Harley Quinn and Poison Ivy #4 starts where the last one left us, that’s always something to enjoy, knowing you haven’t missed anything. No, there’re no time jumps or any strange goings on behind scenes. Well… what would our two anti-heroines find strange, anyway? Houser doesn’t need those tricks, because she has so many others up her sleeves.
We take a short rest stop, and Harley is, shall we say intrigued, by the idea of dinosaurs and much like all the other times, Ivy says yes to make Harley happy. The relationship between the two is caught really well by Jody, who does a great job of letting the reader know how familiar the girls are with each other. We get to see the lengths they would each go for each other, to no one’s surprise it’s pretty far!

They are Style, they are Grace, and they’ll kick you in the face!

The girls look as good as ever in Harley Quinn and Poison Ivy #4, thanks to the awesome artistic team behind the issue. Well, mostly thanks to the art team. Those girls have a style that never goes out of fashion! Adriana Melo and Mark Morales already work well together, as we’ve seen from previous stunning issues. They seem to have added another person to the dream team this month; welcome to Wade Von Grawbadger. Whatever they’ve done is still working, as there are some amazing panels in this issue. The last few are just a sight to behold. The emotion and depth you can see written on each character’s face is just extremely impressive.

I need to know what happens next! Harley seems ready for a fight and Ivy seems to be getting a better grasp on her new form. Everything is coming up Harlivy… sort of, not really. I feel like we have a while to go before we finish the plot and I know we only have 2 issues left!
I have no idea how Jody Houser’s going to pull this off, but I can’t wait to find out, next time on Harley Quinn and Poison Ivy!