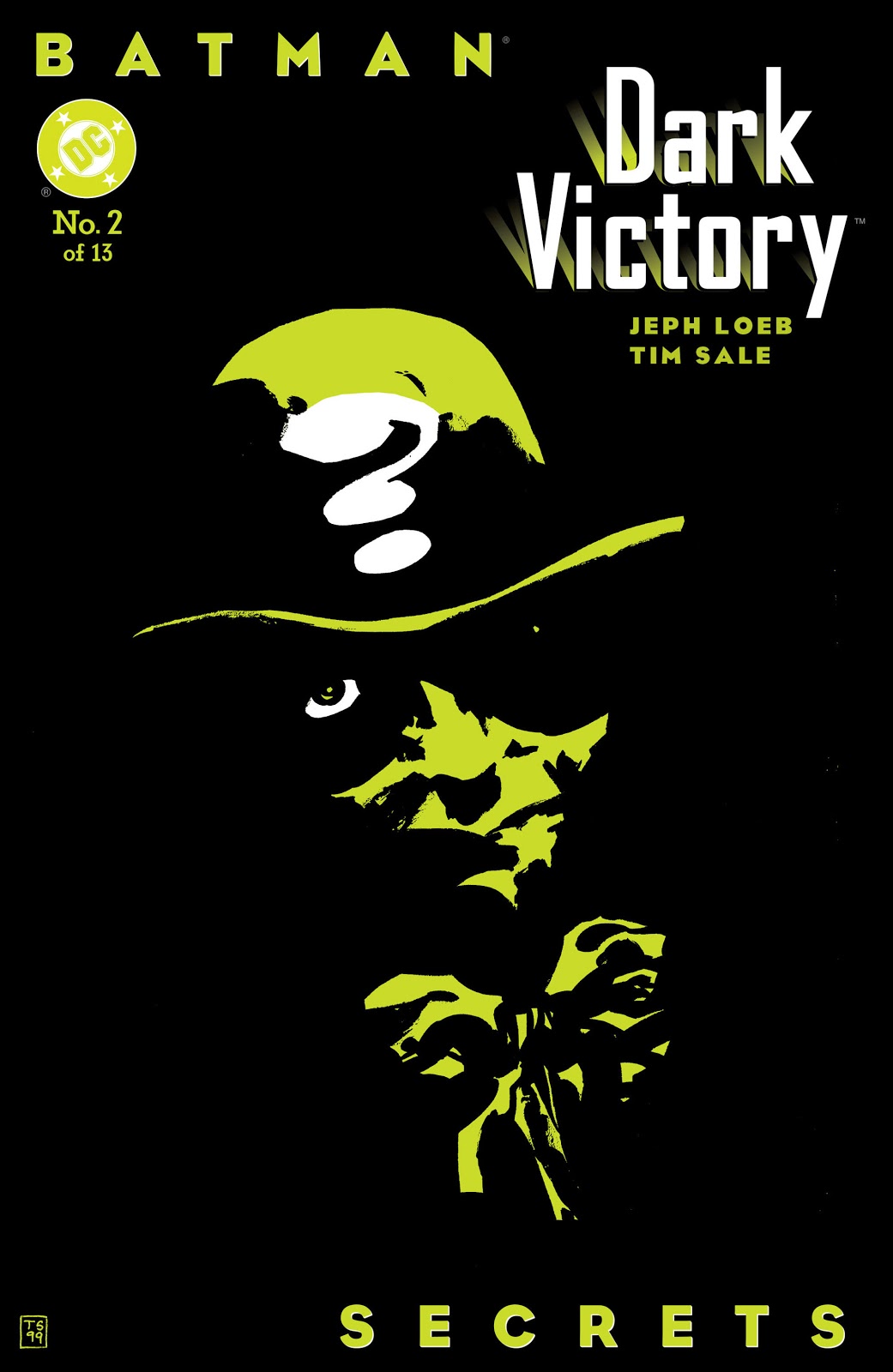 The mysterious Hangman is murdering cops and Two-Face is still loose in Gotham City.
Unlike the first couple of Holiday killings, Batman wastes no time shaking perps down for information on the Hangman victims. After enduring a full year of murders with Holiday, the Dark Knight has little patience when a new serial killer pops up. Another reason for why he is more expedient to catch Hangman is because the victim was a notable policeman, not just mobsters. Hence, there is more pressure on Batman from the public. The Riddler is the first crook that Batman meets up. Once Batman intimidates the Riddler to help him find clues, he departs.

Meanwhile, Commissioner Gordon meets up with his predecessor Gil Loeb. Loeb is another hold-over character from Frank Miller’s Batman: Year One. What is most striking is how closely artist Tim Sale renders former Commissioner Loeb in the style of Year One artist David Mazzucchelli. In Year One, Mazzucchelli’s Loeb is easily the most unsettling character design in the story. Sale bends his personal artistic style slightly to fit that design, while still meshing the aesthetic that he already created.

Writer Jeph Loeb layers this chapter with so many plot lines, or seeds to mini-mysteries. Like, Alberto Falcone hearing voices in his family’s estate. Is he crazy or is there something more sinister going on? Or, why does DA Janice Porter seem unusually chummy with Alberto Falcone? Who is her secret lover? All of these questions are weaved in the tapestry of Dark Victory’s overall narrative.

The most prevalent theme in this issue is Batman grappling with being alone in his war on crime. He reveals to Alfred that DA Porter is making it increasingly difficult to access the evidence to solve crimes. Despite this, he insists that nobody else is able to help him and because of that, he needs to become better, more infallible. This is a callback to the ending of The Long Halloween, where Batman declares, “I believe in Batman.” Dent’s betrayal at the end of TLH has convinced our hero that there is nobody he can trust other than himself. Undoubtedly, this scene inspired Christopher Nolan for The Dark Knight, where Bruce Wayne claims, “The Batman has no limits.”

On a more personal level, Bruce confides in Alfred that before Harvey Dent’s transformation, he debated telling him his true identity.  Bruce pontificates that perhaps if he trusted Dent more, then perhaps he could have prevented Harvey from turning into Two-Face. Unfortunately, when Dent turned, Batman lost not just an ally in his war on crime, but a friend.

Interestingly, the two characters that emotionally resonate with Bruce the most are Alberto and Mario Falcone. Alberto is often shown alone in a giant empty house, devoid of human interaction. To make matters worse, the voices he hears isolates him from his family too.

On the other hand, Mario is desperately trying to legitimize the Falcone name, by cutting criminal ties to the family. Ironically, all the good will he attempts to create cause deep fissures between him and his family. All of these men are islands unto themselves.

The End of an Era

Hopefully readers didn’t get too attached to former commissioner Loeb earlier. While Batman continues his investigation, the Hangman strikes again and murders him. Personalized stationary from Dent’s time as a DA is pinned on his body with the incomplete message: “Two can play this game.”

Loeb’s murder works on two meta-levels. In Year One, Loeb represented institutionalized corruption when he was the commissioner. His death signals how it is the end of era of conventional crime and the start of super-villain crime. This theme started in The Long Halloween and reaches a natural conclusion by the end of Dark Victory. Furthermore, Loeb’s death also acts as a bit of “House-cleaning” to answer fan questions of what happened to the characters in Year One.

With the Hangman’s machinations kicking into high gear, writer Loeb takes his time laying the groundwork for the rest of the series. The issue is not as literary as some chapters of TLH, but it is gripping work. Loeb’s ability to integrate multiple plot threads into one cohesive story is a feat until itself. Additionally, Sale’s art is – as always – amazing and elevates Loeb’s material.