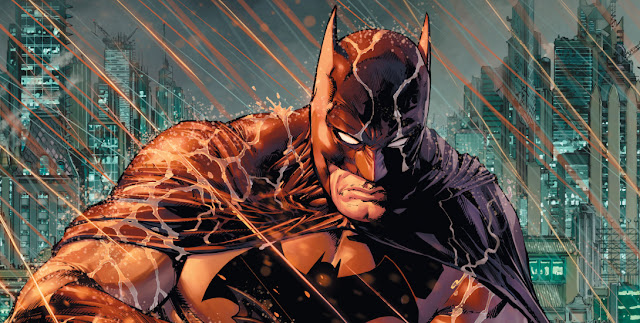 "Their Dark Designs" - Part One 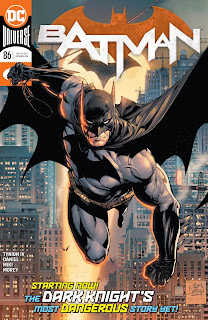 Stepping into the shoes of Tom King, the architect of the preceding 85 issues and their multi-layered, wonderfully sweeping arc, was always going to be the tallest of orders. To put one's own stamp on it whilst honouring what has come before requires a top level talent, and with James Tynion IV, DC have masterfully cast the perfect man for the job.

No stranger to the Dark Knight, courtesy of his rich CV, littered with Batman-related titles, Tynion has an intrinsic understanding of the character. With the release of #86, his first release on DC's flagship book, it's safe to say that the character is in very safe hands indeed.

It very much feels as though a direct line of continuity to King's final issues has been upheld here, as the cataclysmic events depicted over the last few months are very keenly felt throughout the issue. The fallout from the demise of Alfred is clearly affecting the mindset of Bruce, as an exhausted and battered Caped Crusader issues a command to his fallen comrade. The poignancy of the response and reaction from a confused Lucius Fox is heart wrenching stuff, as Tynion says so much without using any dialogue. The panel of a stoic yet heartbroken Batman, standing in the rain with blood running down his face, is one that will endure for a long time, even in a book full of wonderful artwork.

Tony S. Daniel works at an extremely high level throughout ,the issue. His pencil work just demands the reader's attention with every turn of the page. Even at this early stage, one feels as though this creative pairing is going to produce solid gold.

It wouldn't be a classic issue of Batman without a liberal dose of smash mouth combat. Here Tynion depicts it in an interesting way, as we only get to see the very start of Batman's smackdown with Deathstroke himself, Slade Wilson. The next time we see the combatants, the battle is over and the battered and bloody victor sits atop his unconscious adversary.

This is highly efficient storytelling, as it avoids the oft-used trope of filling several pages at a time with an extended fist fight, freeing up more pages to utilise elsewhere. The precursor to the fight is a wonderfully on the nose piece of Batman's internal monologue, showcasing Tynion's grasp on the character and his thought process.


His mind operates at peak efficiency, nine times beyond that of an average man. Which means if I have any hope, I need to take him down fast.

Far from being the Bruce Wayne show, this issue does give us a lot of time with Selena too. Following on from where King left her, firmly back in tandem with Bruce, both romantically and operationally. The mixture of contentment and boredom in the character is palpable. Whilst there's no doubt that she's happy with Bruce, her situation, working a room full of socialites and city officials, does seem to give her a longing for more to do.

Resisting the urge to revert to criminal type, the path that the character can take from here is very interesting. Does Tynion keep her on the straight path or somewhere darker? Also, how will this all tie in with Tom King's upcoming limited series, focusing on the Bat/Cat relationship?

Certainly the denouement of the issue points towards something from her past coming back to Gotham with a dark vengeance, setting up the straight of this next big arc. Either way, our heroes are going to have their hands full... and then some!

There's also a bonus epilogue to the issue, teasing the return to prominence of Batman's arch nemesis. Very well timed to coincide with Hollywood awards season, this character has never been hotter, so it's an extremely smart decision to showcase him once more. Always making for a chaotic and unsettling time whenever he's on the page, I certainly look forward to more of him as the weeks pass by...

This is a superb start for James Tynion IV, as he resists the urge to throw the baby out with the bathwater and instigate jarring change. Instead, this is a smooth transition where we can barely see the join.

An issue full of intrigue, with all the Bat-tropes that this particular fanboy is looking for, Batman #86 is a captivating and engrossing read. As the long term ramifications of Alfred's passing start to take form, the sandbox has never been fuller for DC and their biggest character (sorry Super-fans, but it's true).

With big things being cryptically hinted at, 2020 is shaping up to be yet another banner year for the Dark Knight.