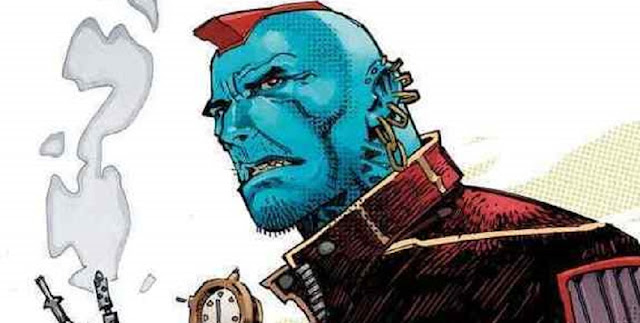 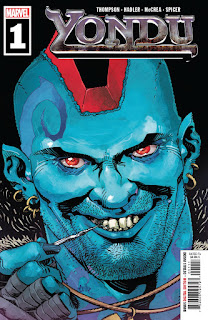 Yondu #1 opens with Yondu doing what he does best, taking $#!+ that doesn't belong to him. Of course, this leads to a chase for his arrest once he's caught in the act. Yondu makes it out of the mess he had made for now, but trouble follows him. A rendezvous with his ex- ravager pal Kraglin doesn't quite go according to plan.

Kraglin and his crew are dead and Yondu finds himself in possession of a valuable artefact, The Herald's Urn; an item on the same level as the Infinity Gauntlet. It definitely draws attention to the possessor. For poor Yondu, it brings a mercenary who cares little if he's dead or alive, and a mysterious young man claiming not only to be from the future... but also Yondu's namesake. 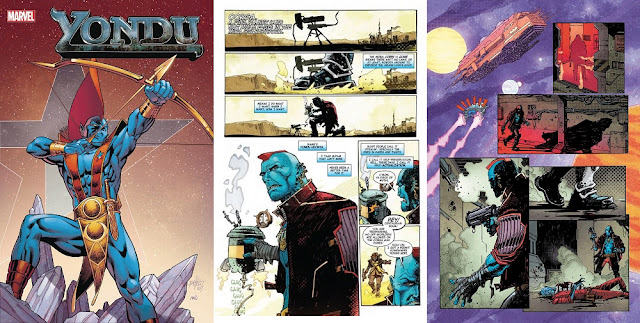 Yondu #1 has quite an interesting story going on and the artwork, by John McCrea, is dark and gritty, which is a perfect fit. My only complaint is a small one. At the beginning of the book there's a Solar Sail Compromised sign that's difficult to read. It doesn't affect the flow of the story, so it's really just me being a bit picky. The groundwork for the issue is set up really well in this first issue, and promises a big story overall for the reader.

I'm quite curious about what this series has coming. With a great set of new characters to interact with, coupled with getting more back story on Yondu himself, it's setting up potentially great things to come. The depth is there and the attention to small details is wonderful. Blue Moon is just one of the great moments we get, and finding all the hidden moments is like playing I Spy.

Yondu #1 drew me in, I wasn't sure if I would like it at first. It grew on me as the issue unfolded. I like the humor immensely; there's a moment where Yondu's ship gets a parking ticket and I found myself giggling at the prospect.

The attention and love you get overall from the book's craetive team is a recipe for success. The promise of getting not only more information about Yondu but also his race is a temptation to keep coming back for more.

What are your thoughts on the first issue of Yondu? Leave us a comment below on what your thoughts are for this series and what you expect to see.