Review: Batman And The Outsiders #10 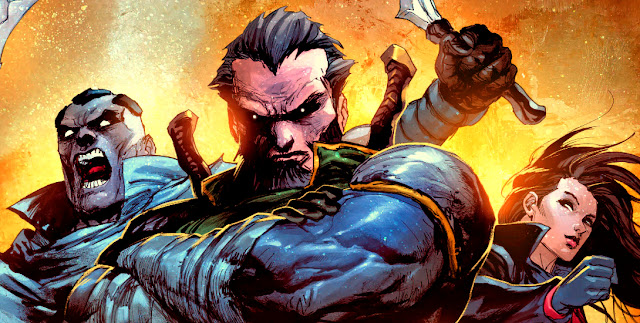 " A League Of Their Own" - Part Three 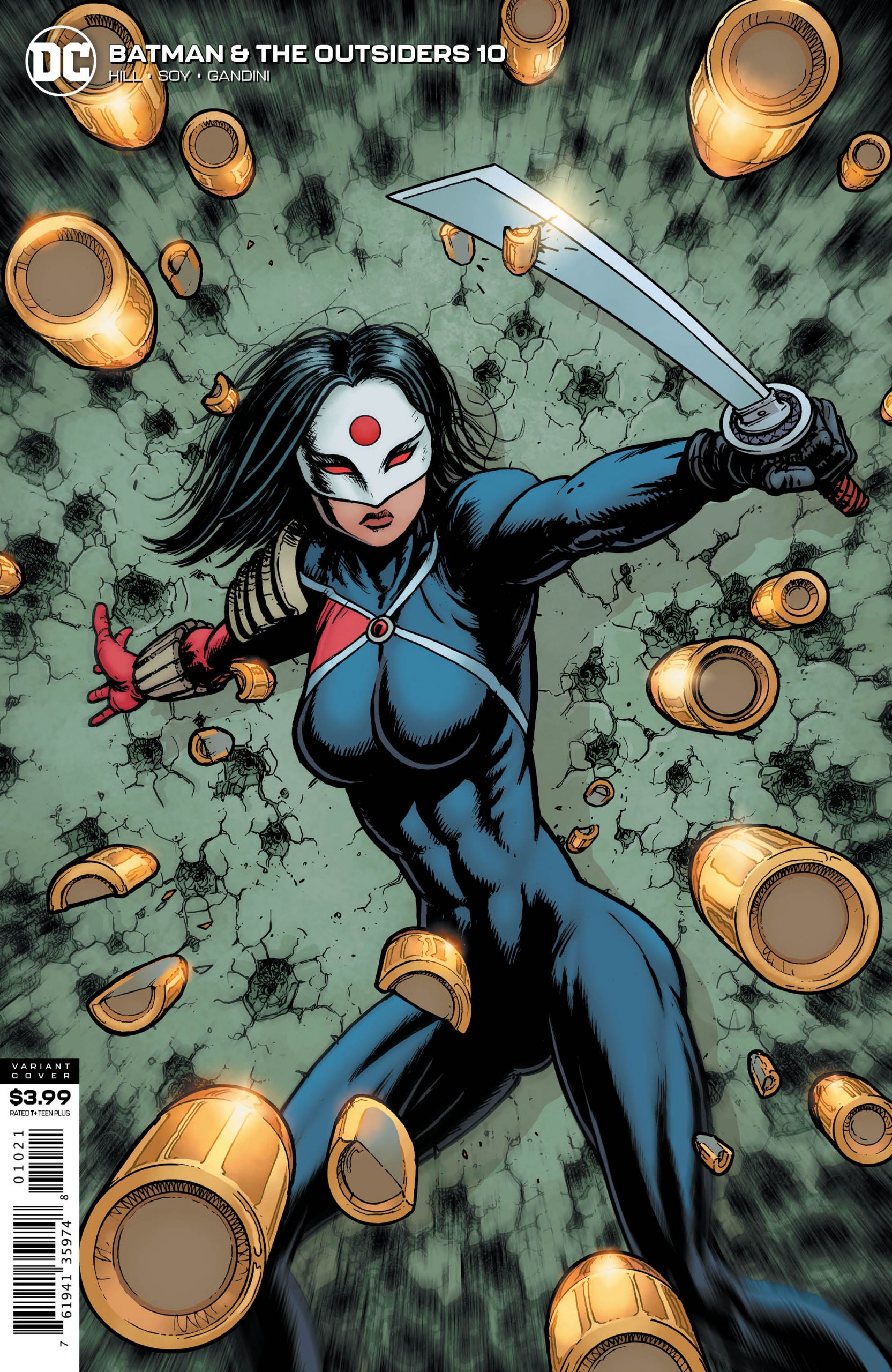 Batman And The Outsiders #10 turns up the heat and dials up the action. Can the team withstand the onslaught of Kaliber, Ishmael and Karma? Can Shiva be trusted? What is Ra’s Al Ghul’s ultimate plan?
One of the (very minor) quibbles I’ve had (and heard) about with this series is that, for a comic that has Batman in the title, we actually don’t see very much of him. It’s a minor quibble for me  because Bryan Hill’s handling of every other character means that I don’t miss my favorite hero that much, and Hill’s writing makes the Dark Knight a presence, even when he doesn’t physically appear. Readers who do miss the caped crusader will absolutely love this issue, as it contains several great and powerful Batman moments.
Just look at page two, reproduced below, then read ahead for some of the finest lines of dialogue I’ve read in a long, long time.

Sofia: I don’t know who you are, Batman. You’re making promises from behind a mask.
Batman: Of my two faces, this is the one you should trust.

Brilliant stuff… and it doesn’t end there: 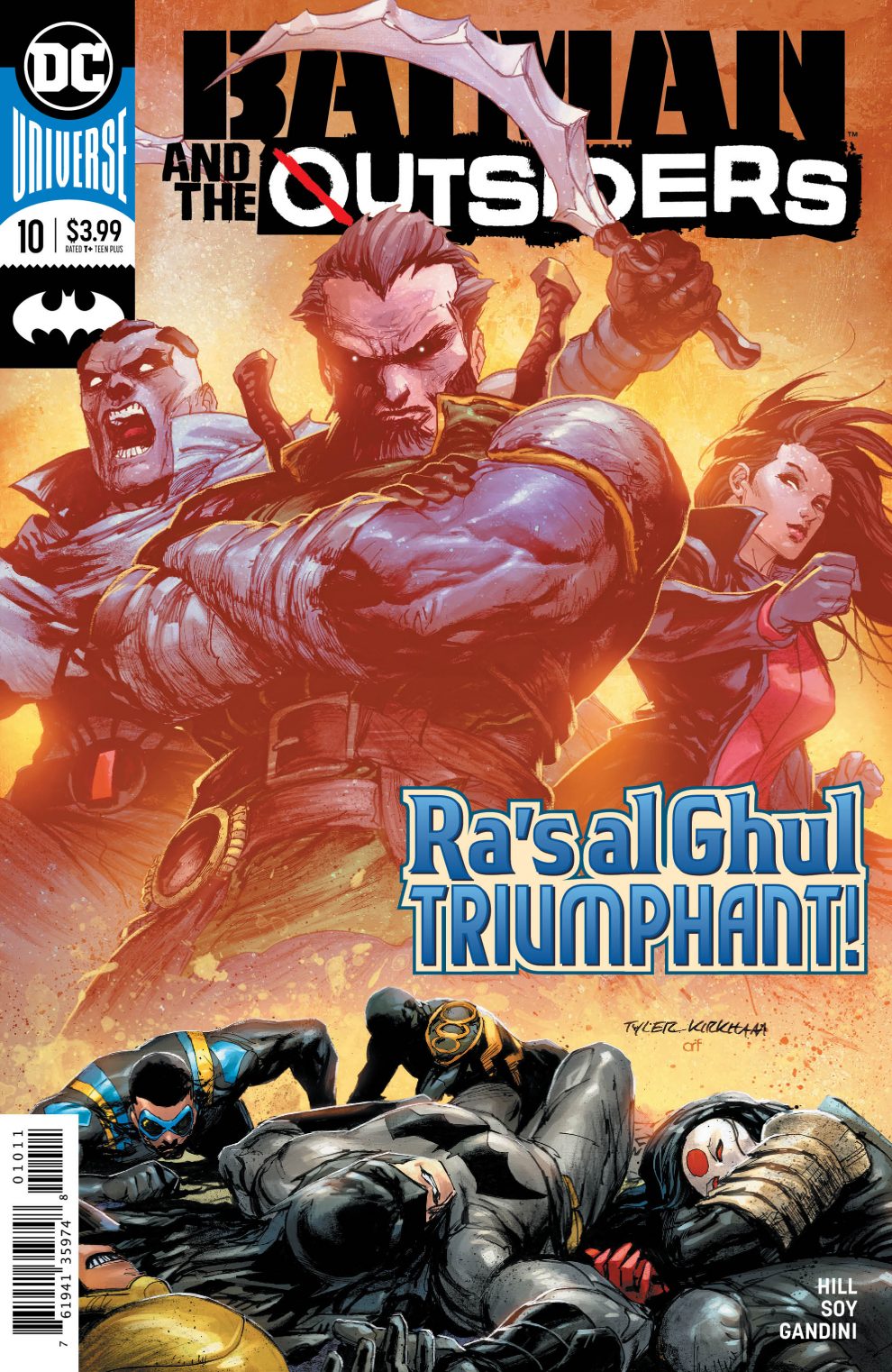 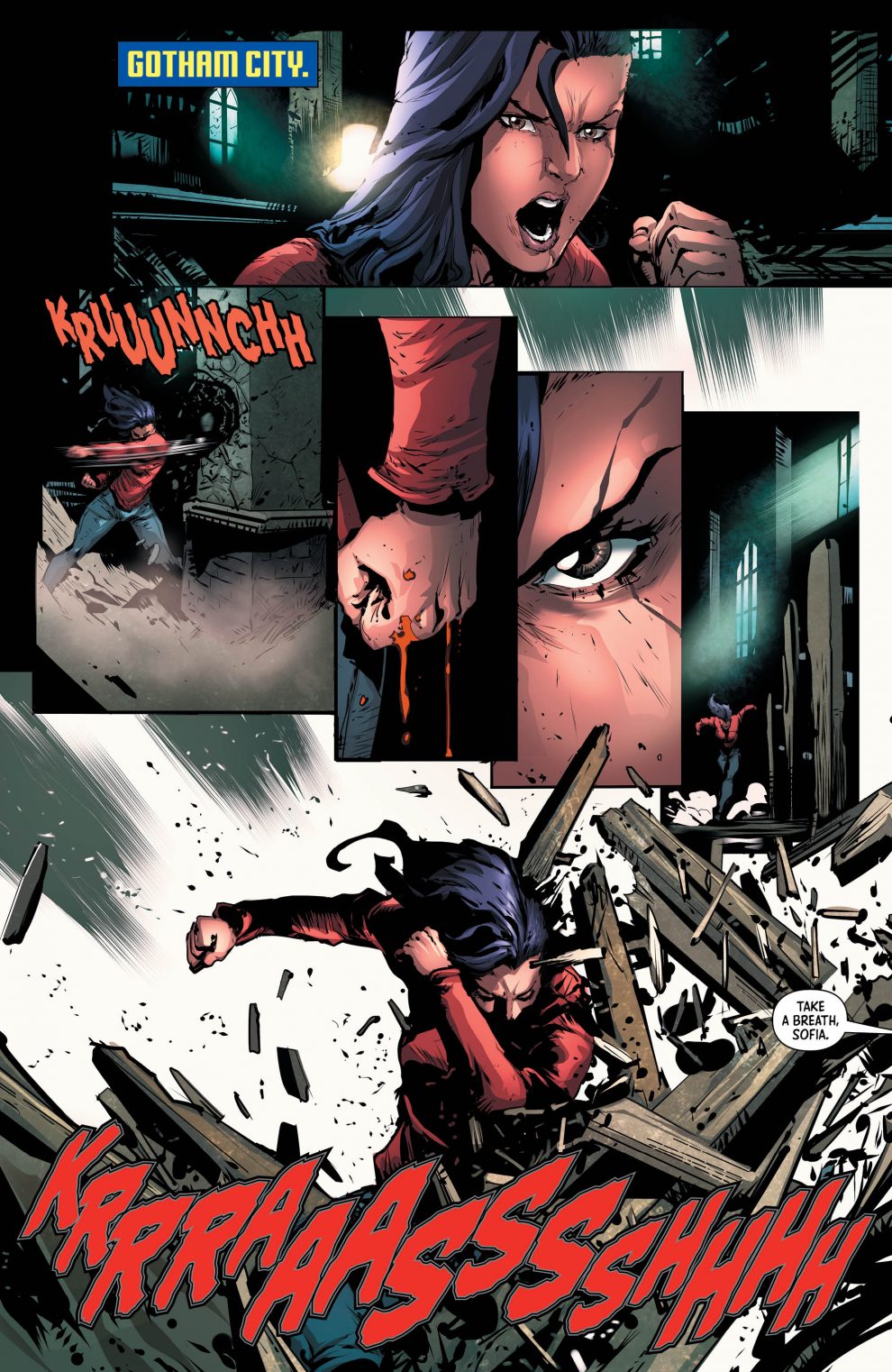 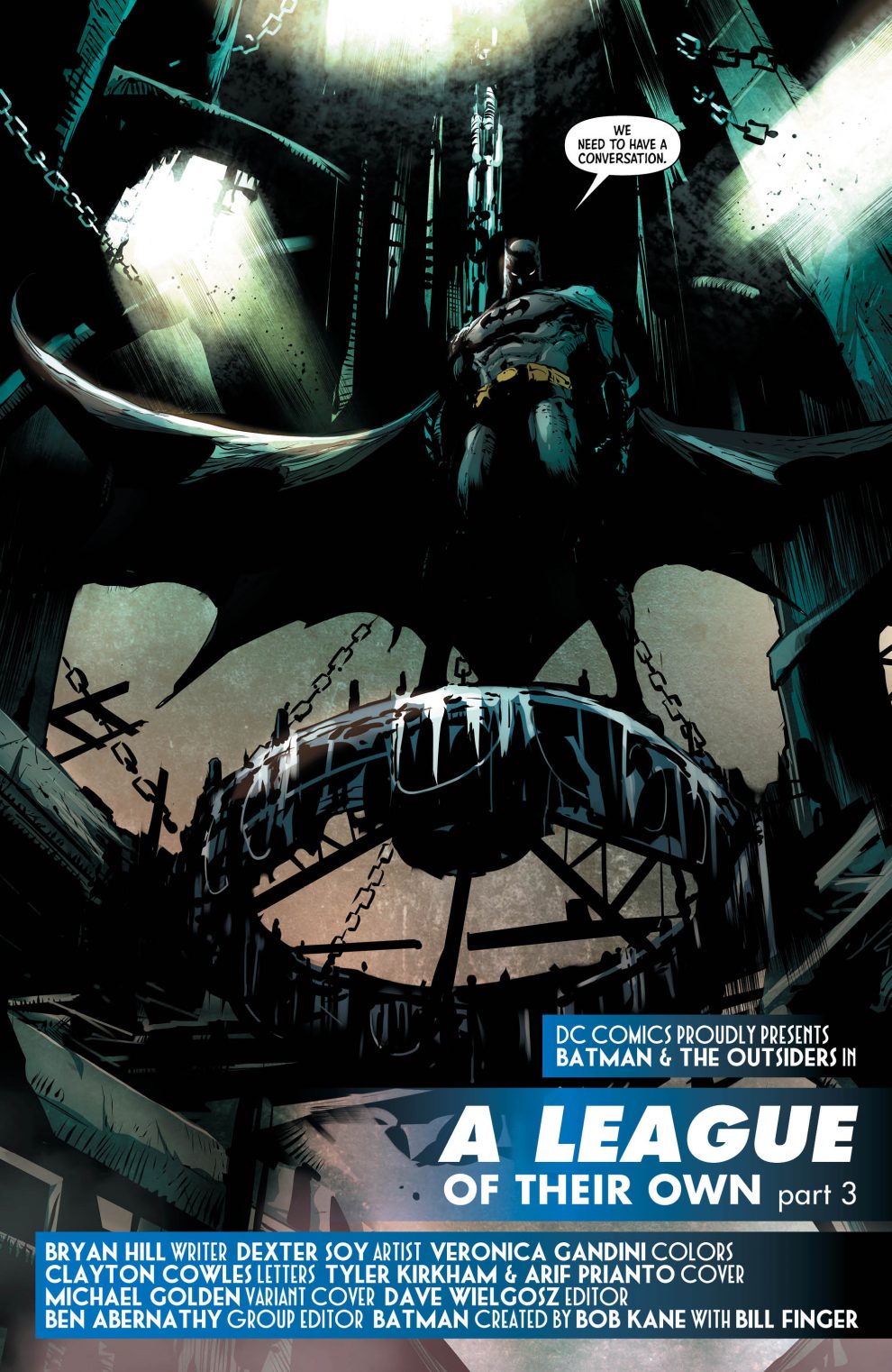 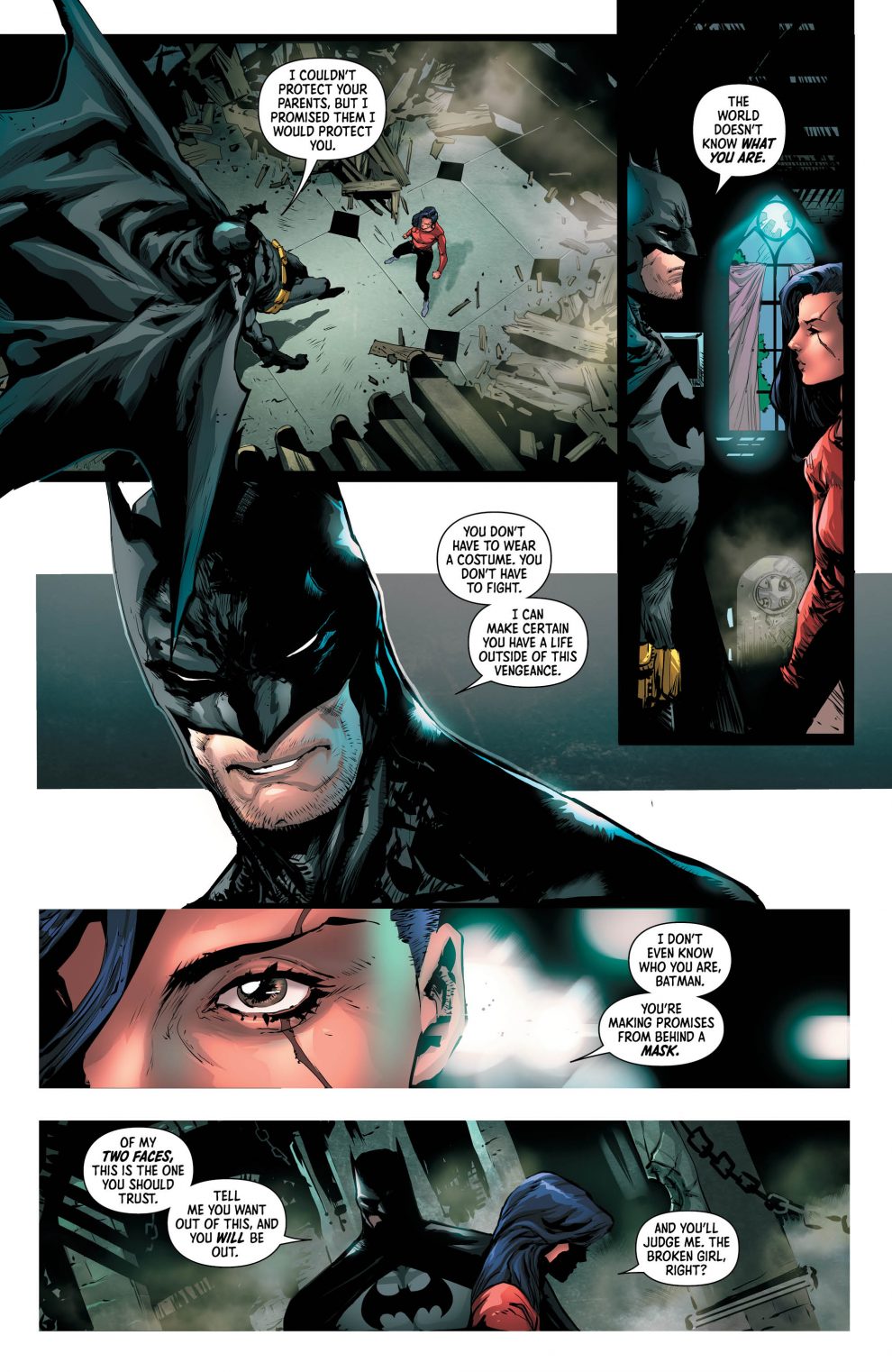 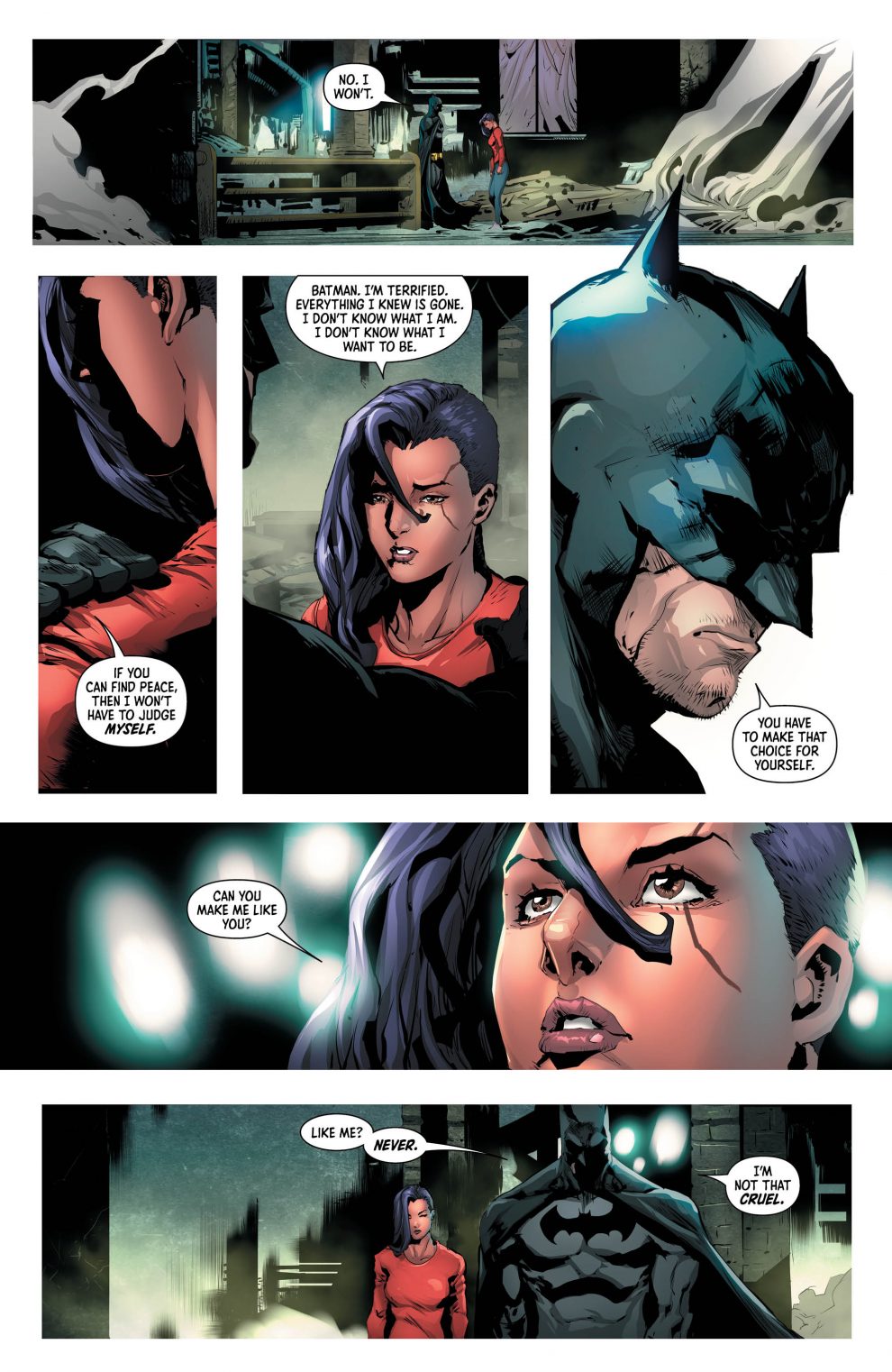 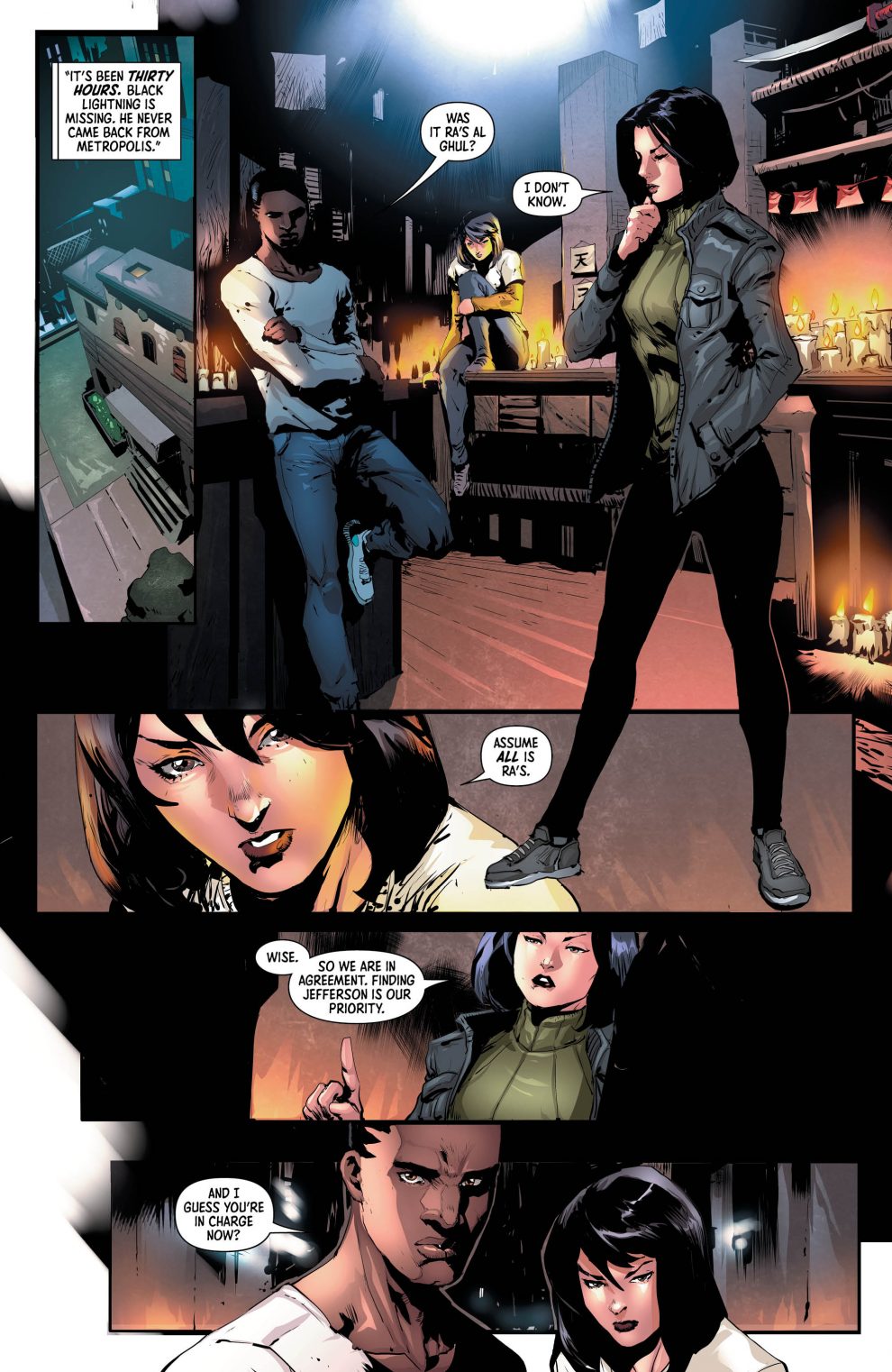 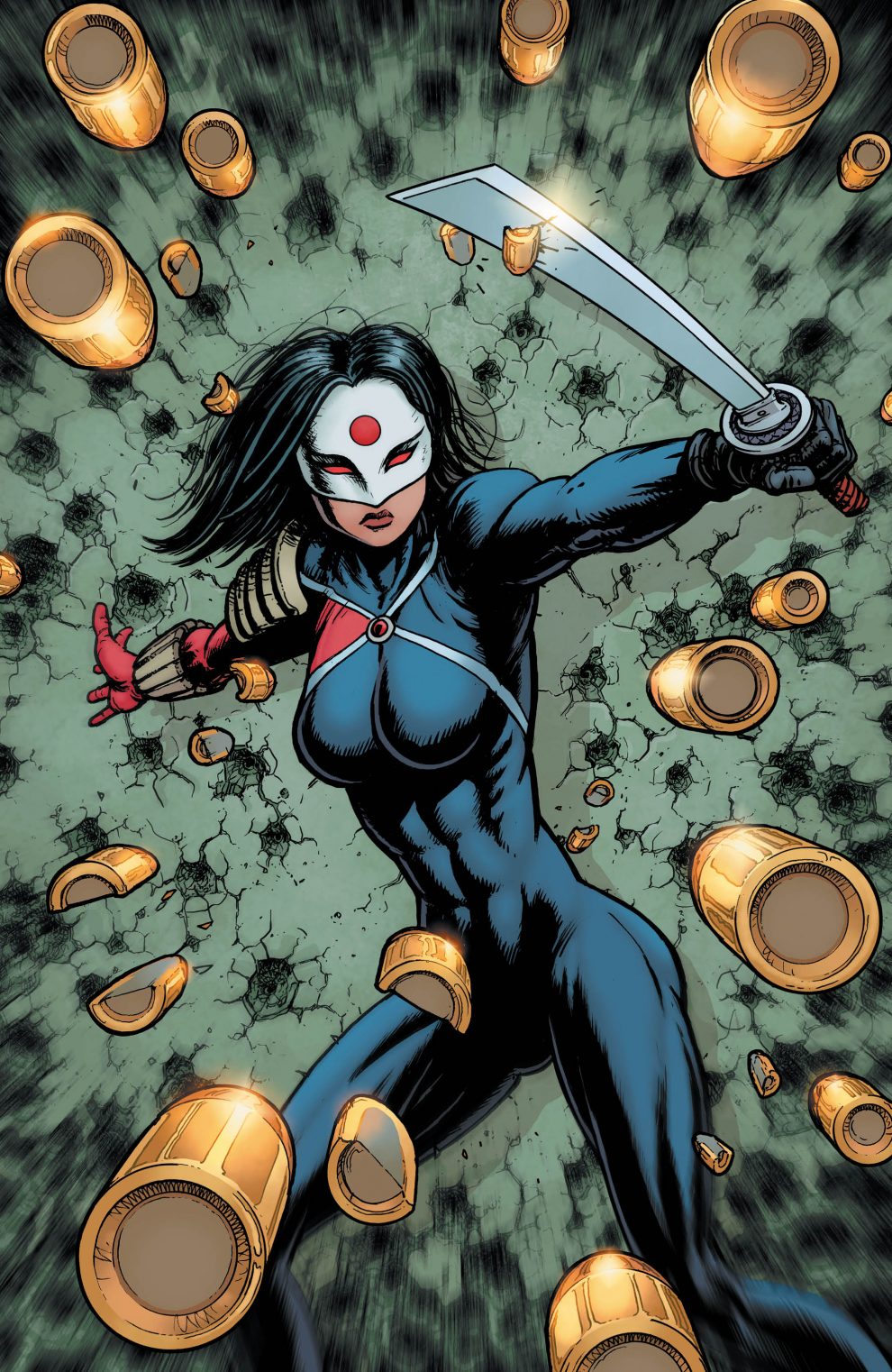 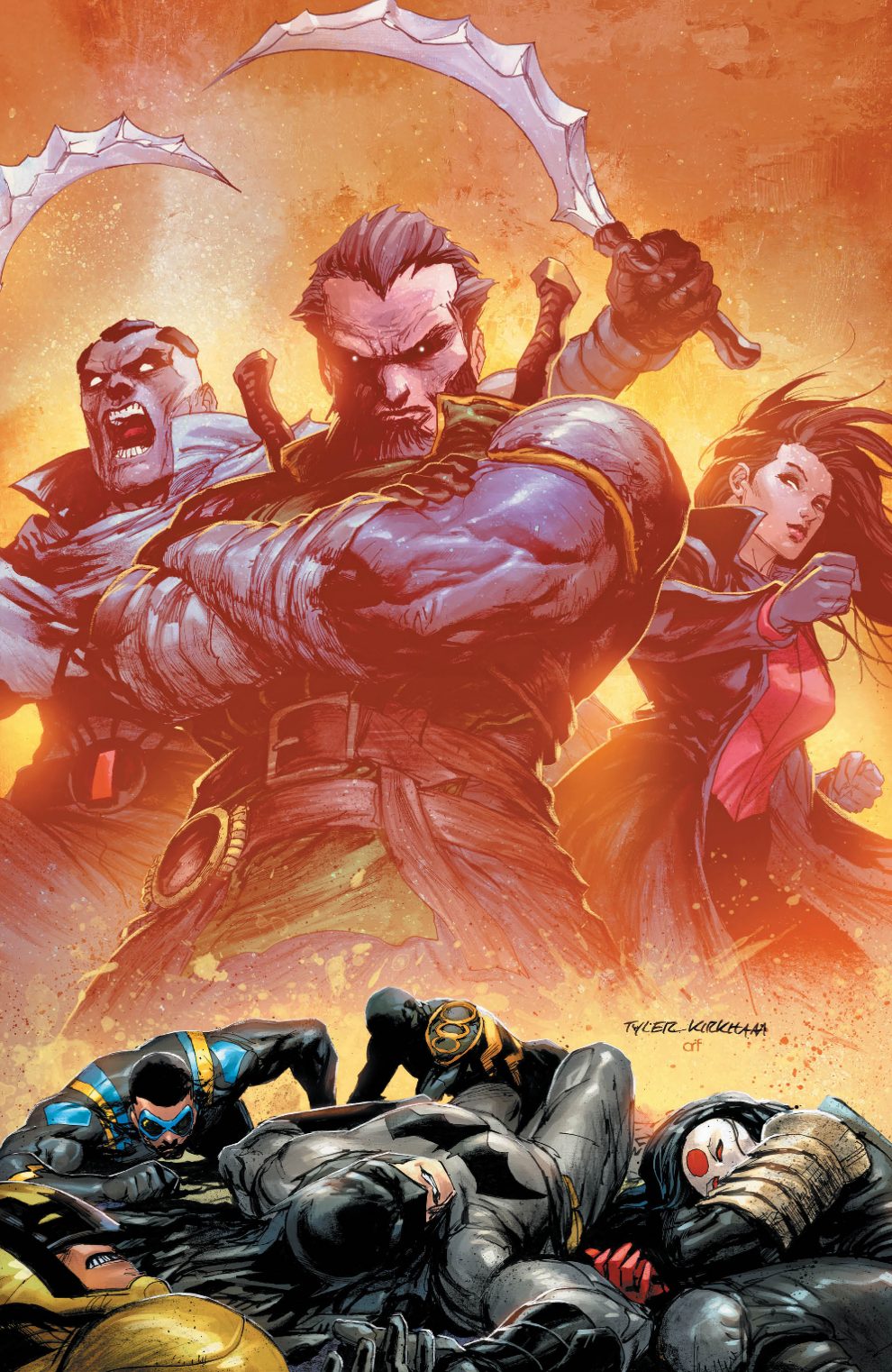 The team of Dexter Soy, Veronica Gandini and Clayton Cowles have also delivered stellar work this month… surprise, surprise.  The Batman Splash on page two is a thing of beauty, and worthy of being reproduced as a poster. I’d buy it. The montage of Sofia’s rage on the book’s opening page is as well laid out, inked, colored and lettered as any comics page could hope (or ever wish) to be. The way the panels slowly angle down, the close up of her eye and bloodied hand, demonstrating such rage, and pain. Clayton’s lovely sound effects, as she destroys a concrete pillar with her bare fist, before crashing through some wooden ballast… she doesn’t say a word, yet speaks volumes. The eye follows the action and the heart feels the emotion.
The dialogue in this series is wonderful and, though I trust Shiva about as far as I can throw an elephant, she seems sincere. The action scenes between Kaliber and co, when they clash against Jefferson and the femme fatale, are terrific. In contrast, the quiet moments between Tatsu, Cassandra and Duke are very subdued and intimate, but no less intriguing or riveting. Oh… and if that last page didn’t have you cheering, then cursing (because it’s the last page) then comics aren’t for you.

I really enjoyed Batman And The Outsiders #10, heck… I’m loving the whole series. This is a title that can be thoughtful, emotional and action packed. Sometimes all at once. The writing is on point, the characters are vibrant and interesting, and the visuals are outstanding. What can I add to that? I’m so looking forward to seeing the Outsiders kick some serious bad-guy butts next month, and then seeing how the Demon’s Head reacts.
For readers who want vintage comic books without having to pay vintage prices, this is the title for you.