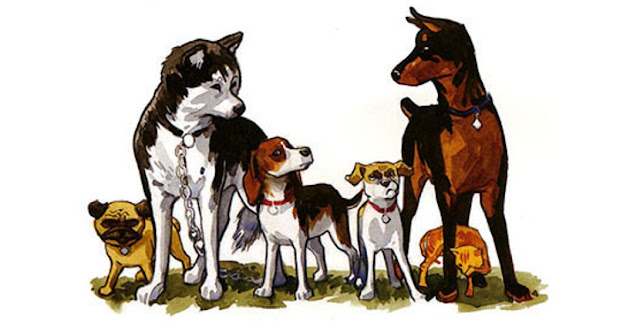 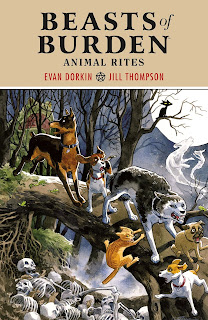 
What Makes A Good Tail?

When I was given the freedom to choose what books I wished to review for Fantastic Universes, I wanted to make sure that I choose titles that I'd always wanted to read, but hadn't had the chance to. Either that or I wanted to pursue Graphic Novels that I'd been recommended and just hadn't sat down and read.

For me, when I go into a book I'm meant to be reviewing, I look at quite a few variables before diving in. Will the story draw me in? Will it hold my attention? Is this one I can kill in one go, or one that will take some commitment? 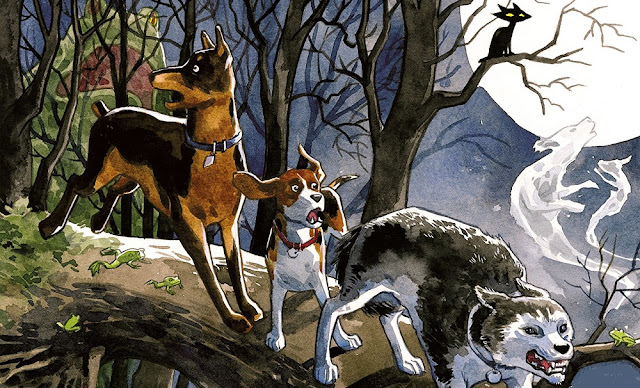 As a reader, I want to be taken in and shaken up in some way. I want to be able to connect to a book on some level and understand the characters that I am reading, and their story. For me, this has always been a draw for books; a writer or art team's ability to pull me into their world and watch as their story unfolds. I got far more than I expected with Beasts Of Burden, an eight-time Eisner Award-winning series. This should have been no surprise, but I had the joy of going into this one blind, with no previous information or expectations, which made this meal all the more exquisite.


Every comic book fan I've ever met has a list made up of stories that resonated with them, and ranked based on just how hard the story hit them, in one way or another. I too have a list and my list features some of the standards like Kingdom Come, Watchmen, Sin City, and Marvels. Also tales like Quiver and Rogue's Revenge. I would have never expected that Beasts Of Burden would infiltrate my list, let alone my top five.

Let's take a look at it and you may begin to see why. 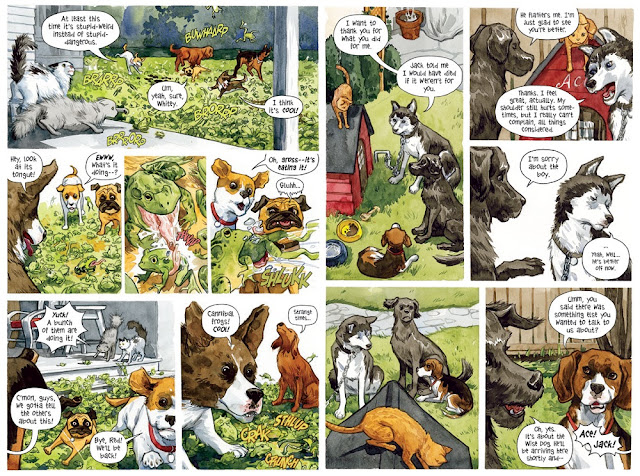 Burden Hill may seem like a sleepy little town, but many demonic forces are working below the surface. A beautiful suburb where all would seem to be normal on the surface, at least through human eyes. But these are not the eyes we see through in this set of tales. No. We see through the citizens of Burden Hill of the animal variety: the loyal pets, the abandoned strays, even through the eyes of a familiar who has quite the story to tell.

Beasts of Burden gives us the tale of a group of dogs and one cat who have the call of heroism thrust upon them, time and again. Whether it's dealing with black magic, demon frogs who fall from the sky, or the dead rising... they pool together in order to keep each other safe, but also the whole town of Burden Hill. 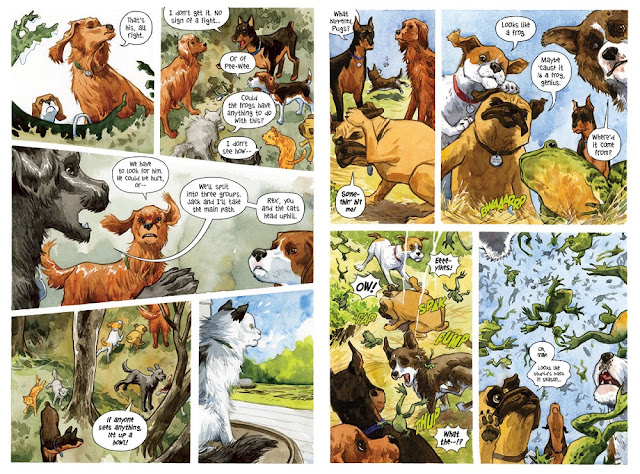 Evan Dorkin has quite a list of books under his belt already, and reading that this one was set to be a one-shot for a Dark Horse Anthology was shocking. I'm supremely grateful that, with him pushing for Jill Thompson for artist, real-life magic was brought to life. Jill Thompson's work is absolutely stunning, and I knew her before this book ever entered my radar. This immensely talented artist is responsible for another of my loves with her series 'Scary Godmother', which if you haven't heard of or read... do so. I promise you won't regret it.

These two, along with Letterer Jason Arthur, succeed in not only bringing us into the town they have created, but by giving us absolutely lovable characters. Each dog or cat has a very distinct personality and beliefs that they follow. We get a wealth of detail, a roller-coaster of light-hearted comedy and heart-wrenching despair, as we follow the ragtag crew on all their adventures. 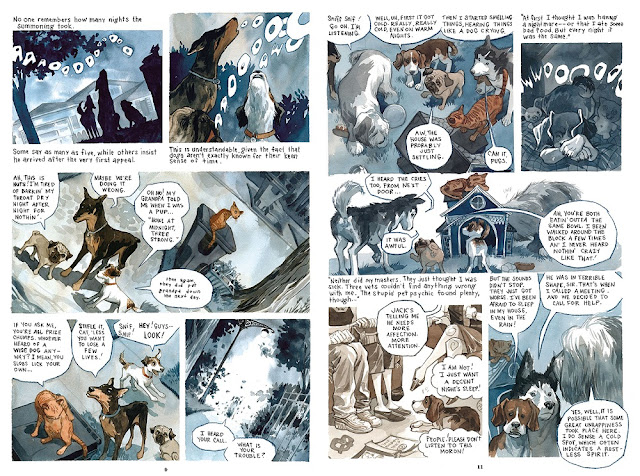 My personal favorite story is "The Dog and His Boy" which was co-written with Sarah Dyer, Evan's wife. I won't ruin it because it needs to be read, but it involves one of my favorite dogs, Ace, and is honestly the story that drew me in the most. I'm not ashamed to say that this one caught me so hard that I was bawling by the end of it. This was the story that let me know that this graphic novel was something I wouldn't be able to put down and that I'd be supremely frustrated when there was no more for me to read until the next chapter came in.

These masters of their craft have brought an absolutely intense and all-encompassing world to readers. With Evan's writing and the beauty that is Jill's water-color style of art, this series is perfect in every way. It may be a story told by animals, but it becomes so much more, and these characters rival some of the more well-known superheroes in emotion alone. 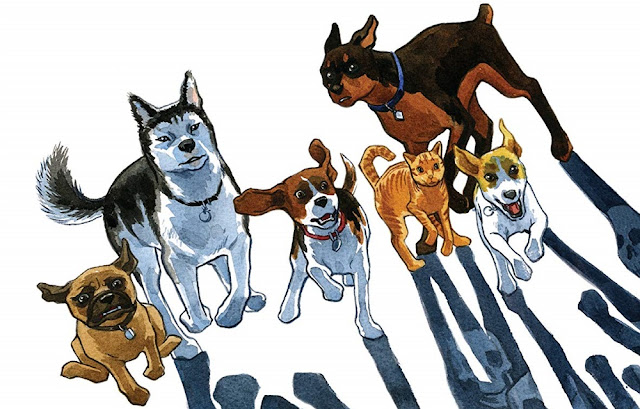 Beasts of Burden is indeed something special in the storytelling world and to miss out on it would be folly. It has something for lovers of all genres, and I believe that there's something in it for everyone. It's absolutely brilliant and all its parts culminate into one story for the ages.

This book was a shock and it's no wonder that it's won the awards that it has. In fairness I believe it deserves even more. This is only the first in the collection of stories and I'm more than hooked, and more than caught up. It's something I need to finish, even though I never want the end to come.

The stories that these dogs and cats tell are important, and strike chords and emotions like childhood favorites like Avatar: The Last Airbender, or Tales from the Crypt. Even then it pulls free from those feelings and becomes an entity of its own, a true delight for readers.

10 out of 10 just doesn't feel enough but since that is the rating board I have, it gets not only a seal of recommendation, but the highest honor I can give.