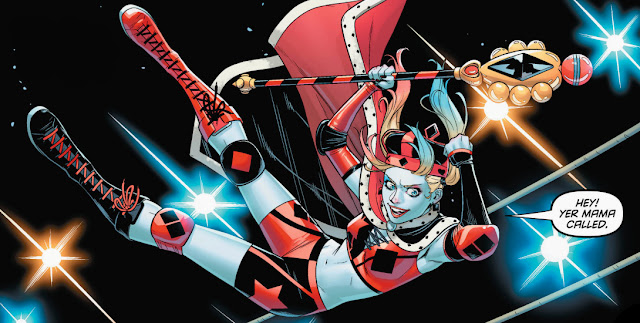 "Queen Of The Ring" 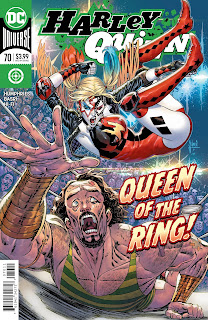 Harley Quinn #70 brings glad tidings. We get back to the ongoing arc in this issue, after a one-shot issue last month. “The Fast And The Foodius” was a great tongue in cheek issue, but this month our normal team is back to continue Harley’s story.

In Harley Quinn #70 we join Harley after she’s taken up the moniker “Queen Harleen” on the wrestling circuit. She has, for the most part, made herself as incognito as possible. Shocking for readers, as who doesn’t know Harley Quinn? She teams up with Alicia the Crusher, who she’s also staying with, along with Alicia’s daughter Becca.
Everything seems to be going smoothly for Harls, until she’s faced with a decision that no athlete wants to deal with. Wrestling fans will be quite familiar with the aspect, as it is a trope we’ve seen time and time again. Luckily this leads to Booster Gold coming into the picture with some advice for Harley, but there are far more shocking things to come for our heroine. 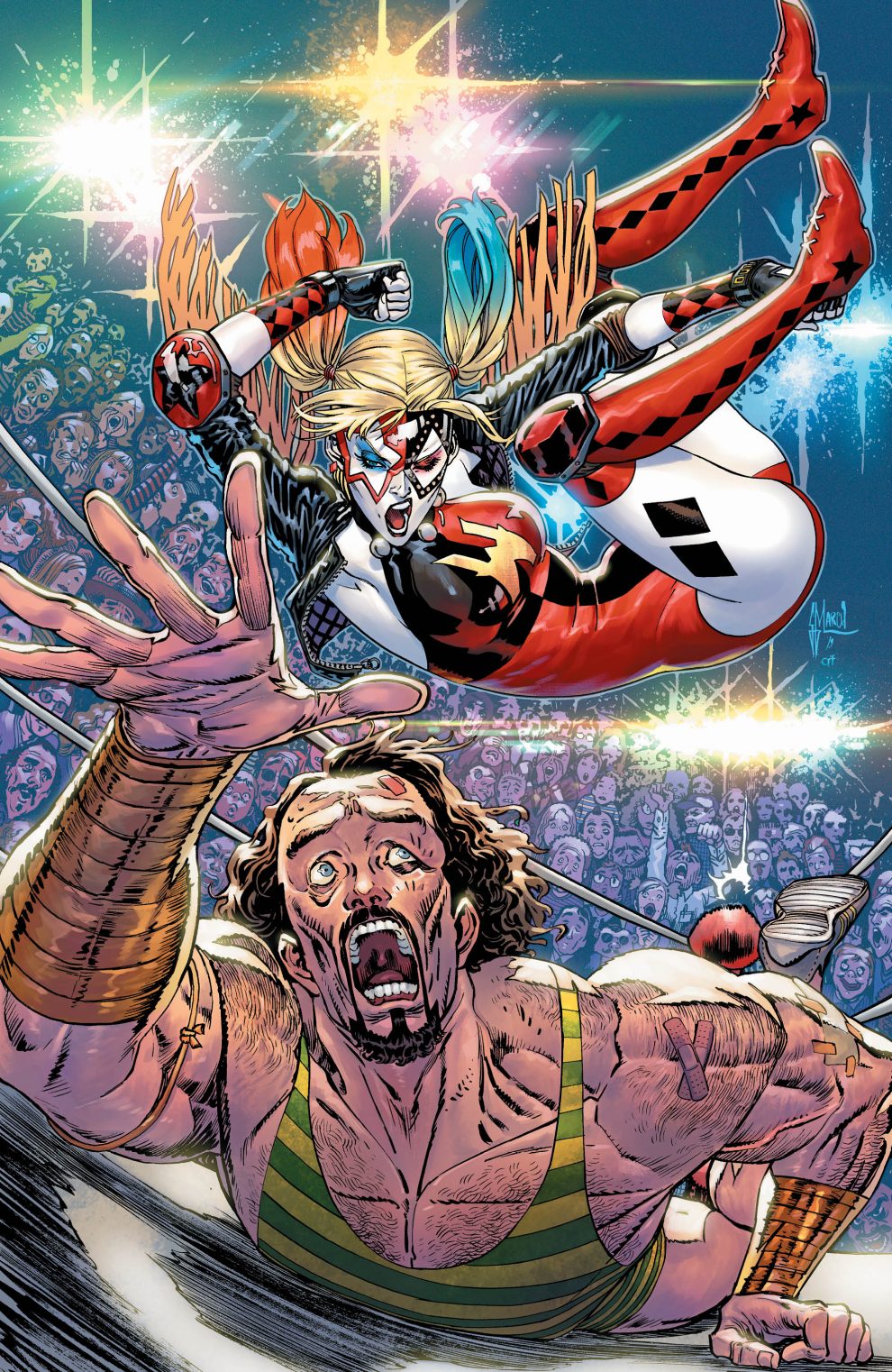 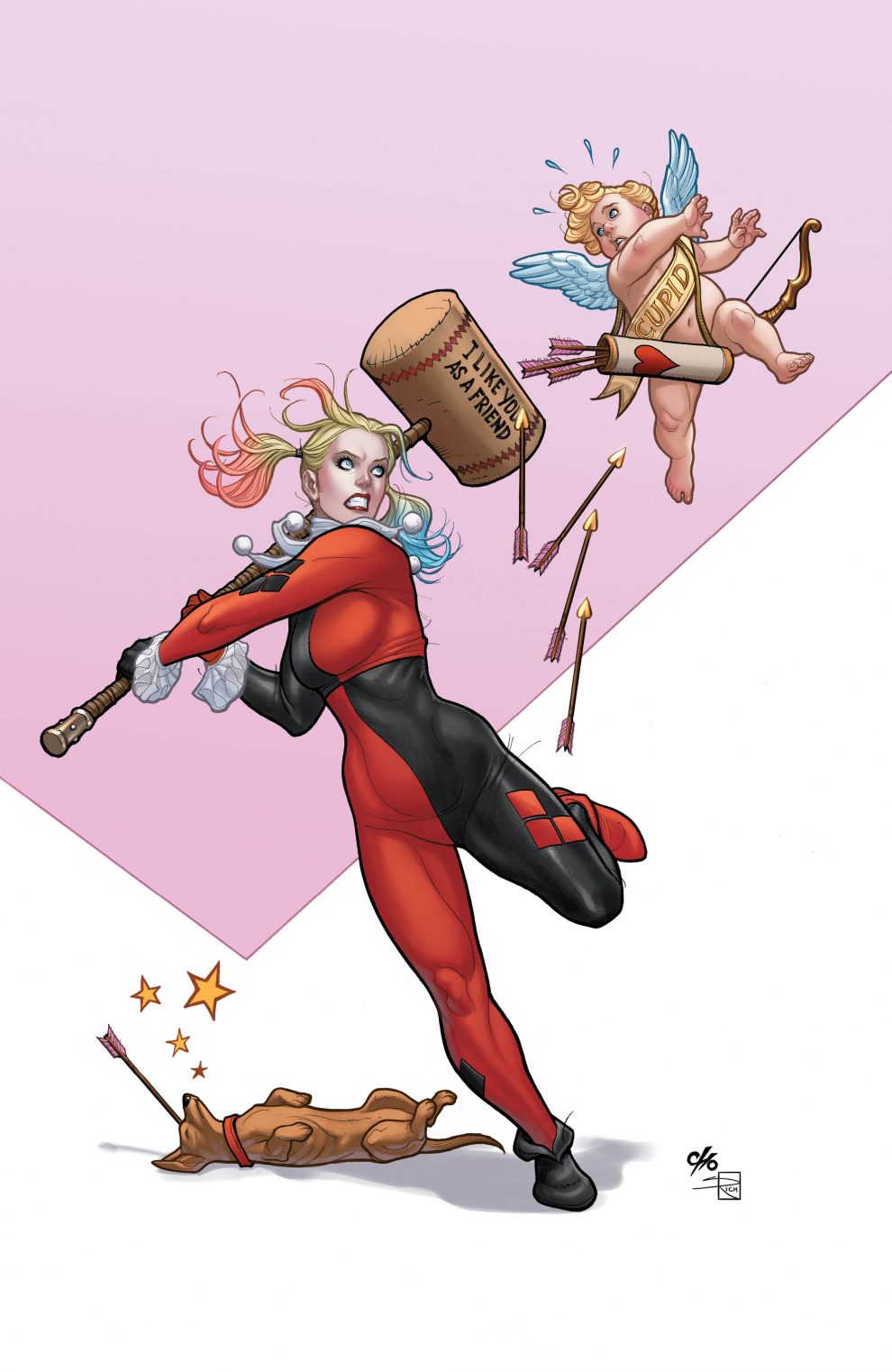 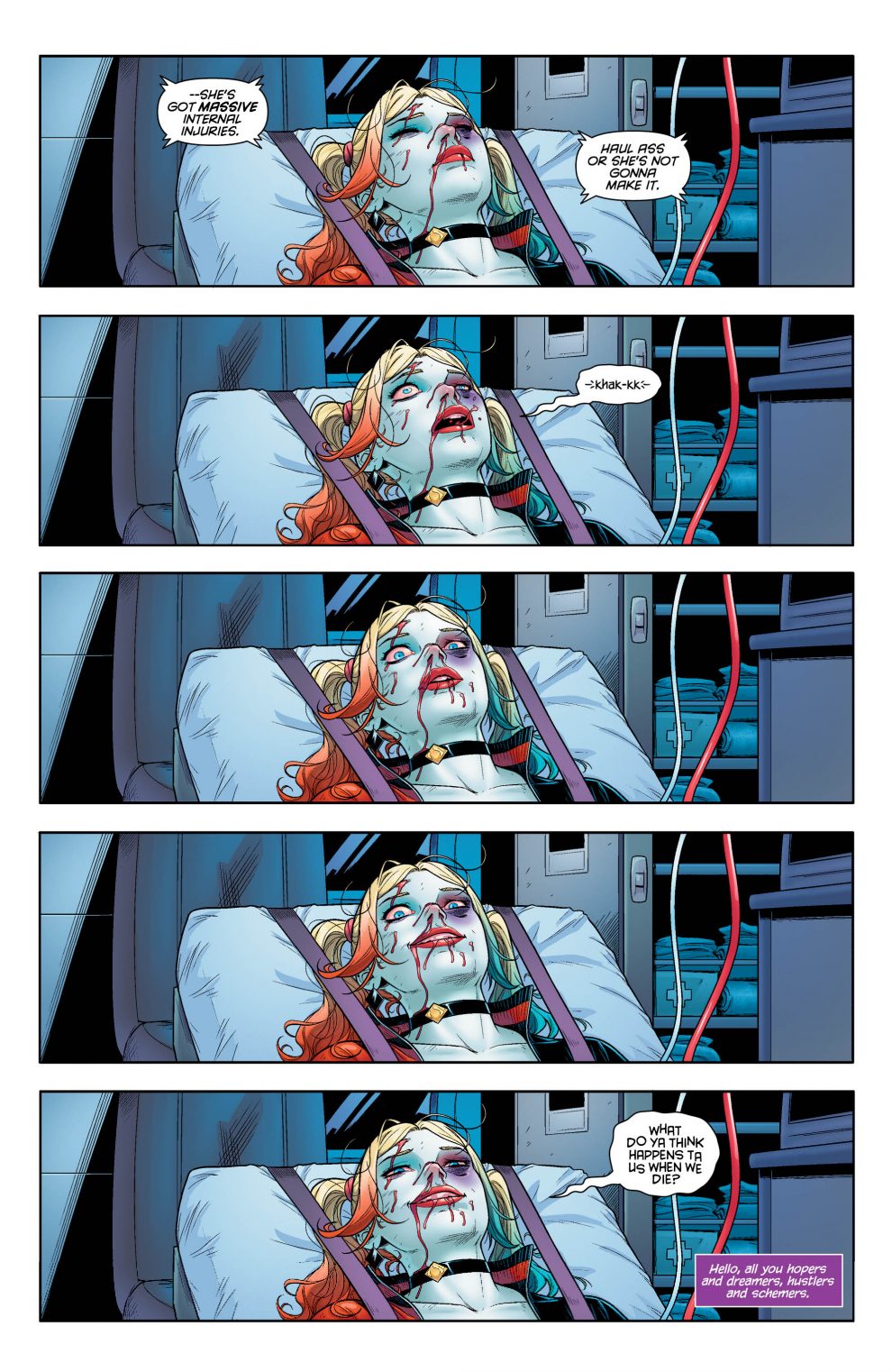 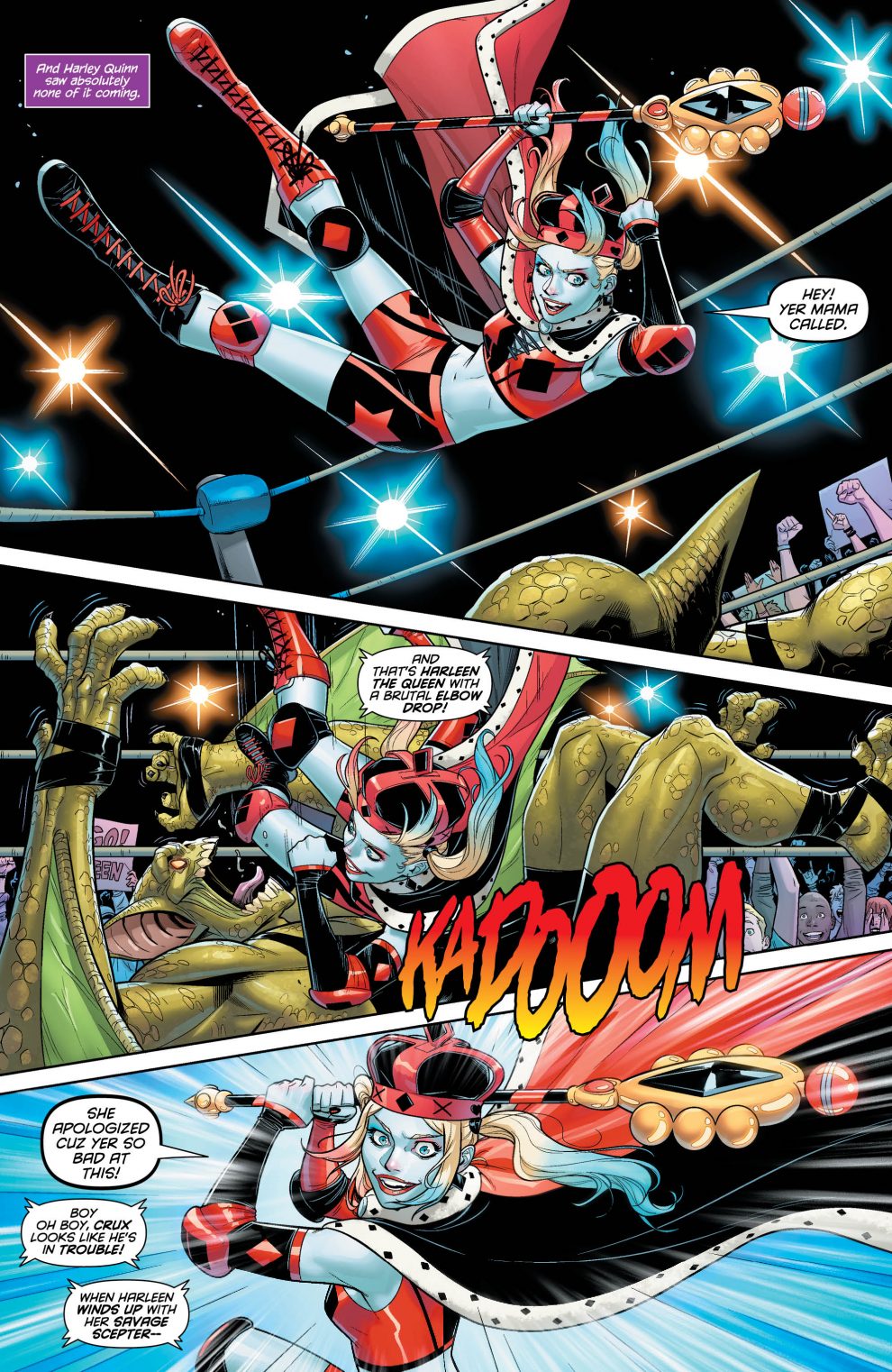 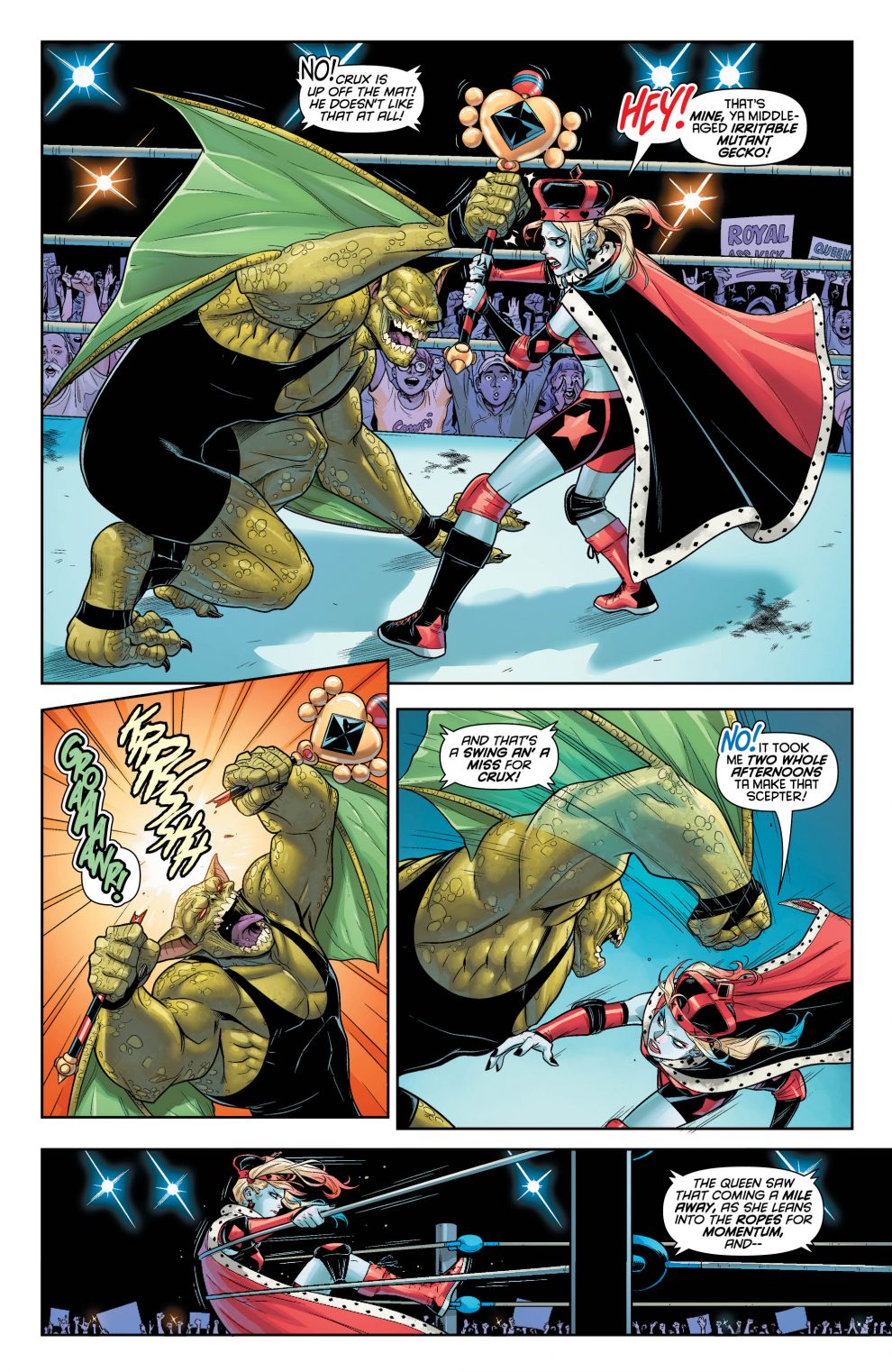 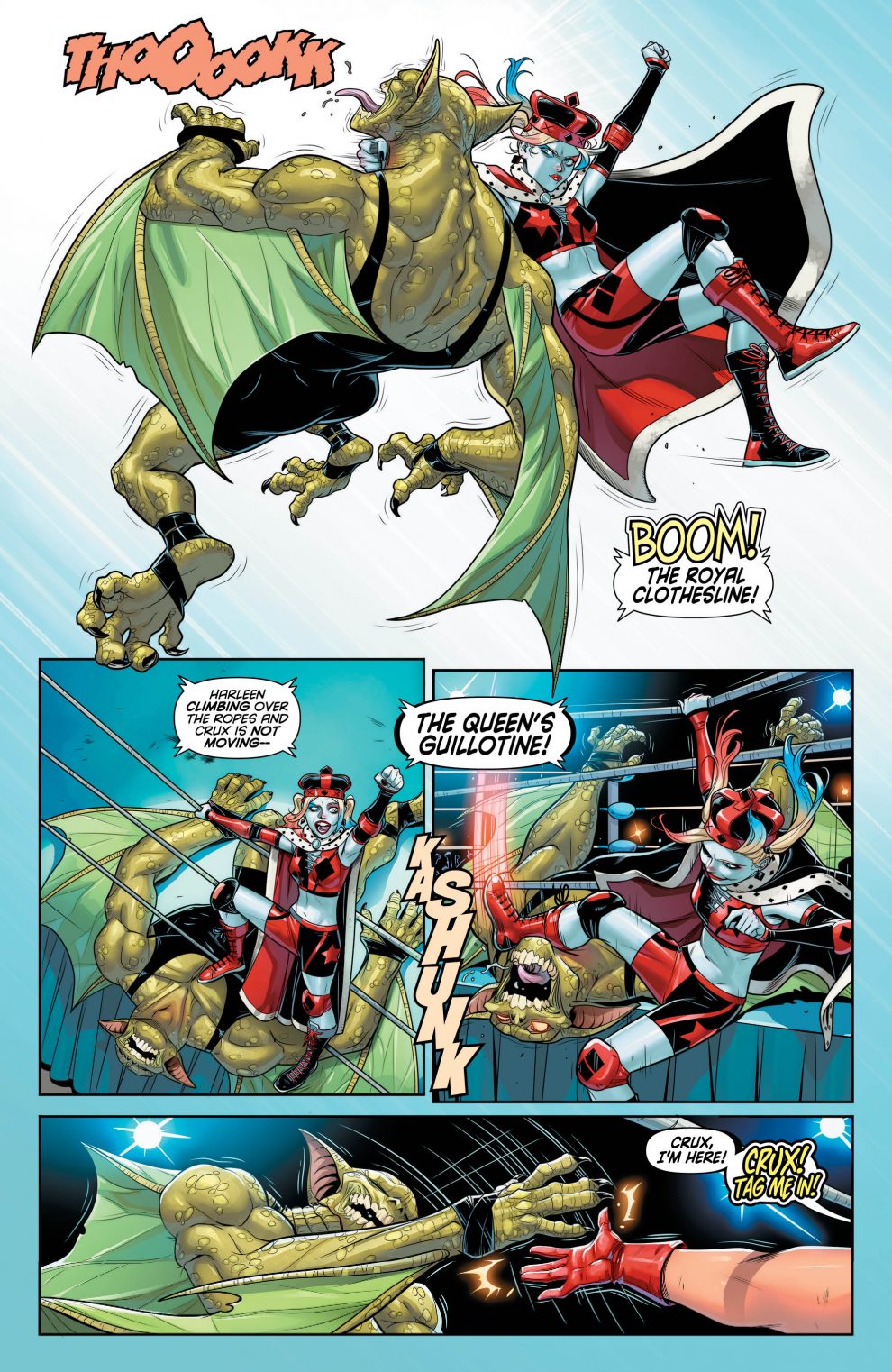 Harley Quinn #70 is a wallop and a half for readers. There’s not only a lot given to us, but it holds us until the end. Sam Humphries is a genius in setting up a story that’s made to be intense, and this issue is no exception… in fact, it’s a shining example. Between the artistry of Sami Basri, Hi-Fi, and the expert lettering of Dave Sharpe, the book is presented beautifully and the artwork is killer.
There are many great moments, but my favorites are the scenes between Harley and Booster Gold. They’re reminiscent of the relationship between Poison Ivy and Kiteman that we’re getting to see develop in the Harley Quinn Animated Series. I’m not saying that’s what’s happening, but I will admit the moments they have together are genuine and welcome.

The conclusion to Harley Quinn #70 delivers a cliffhanger, to say the very least. It was brilliant headlong rush back into the life of Harley Quinn. Brava! I look forward to the continuation of the story very much, as this team always brings excitement and a good mix of fun, right in there with the serious stuff.