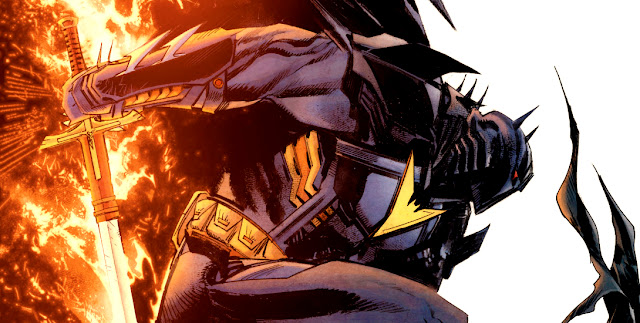 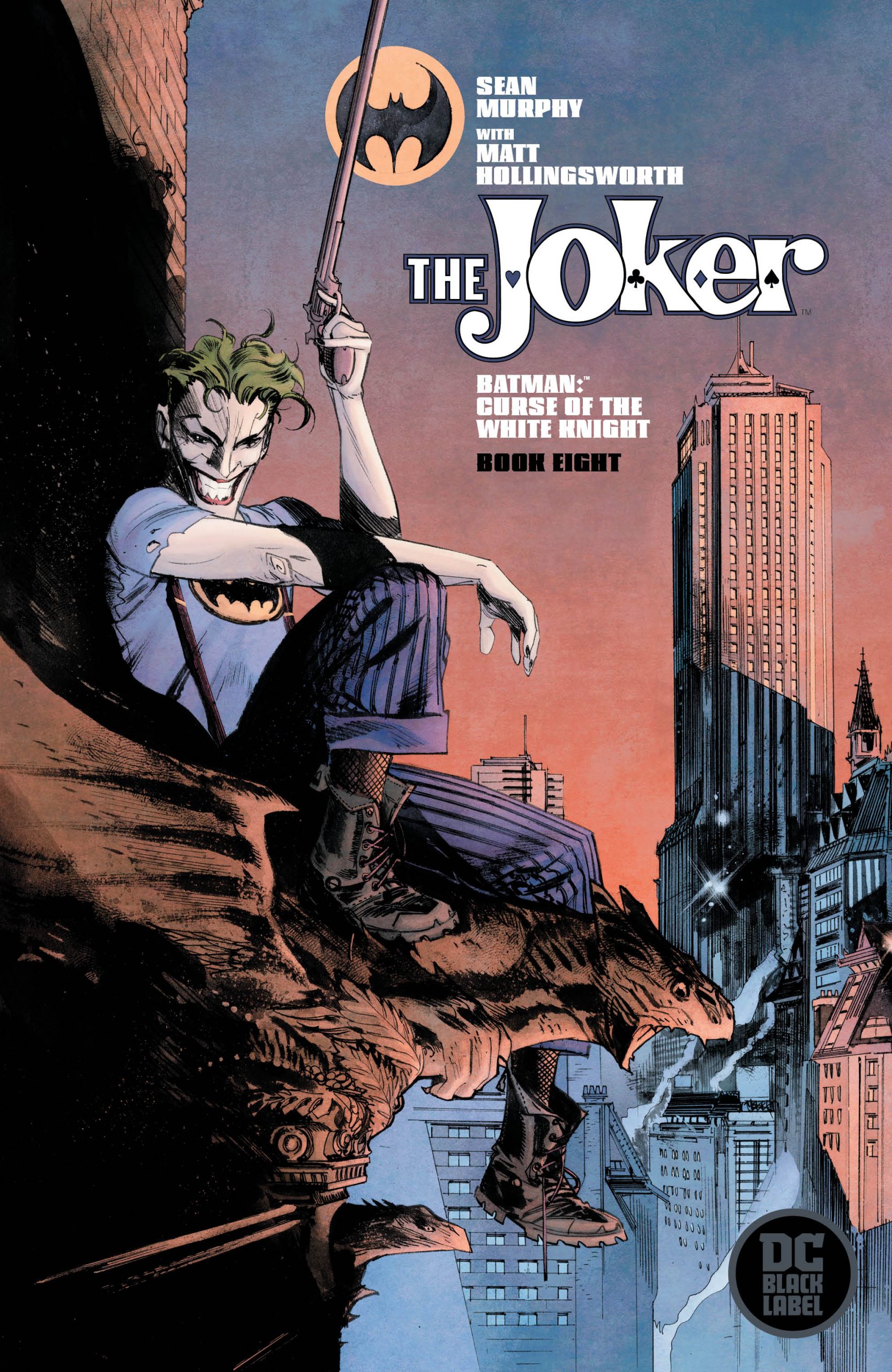 Batman: Curse Of The White Knight #8, the conclusion of Sean Murphy’s mini-series, does what any great comic should, with pages full of action, emotion and revelations. I’ve been both looking forward to and dreading this finale in equal measure, because I was desperate to find out how it would all end, whilst wishing it didn’t have to.
Over the last seven issues (and the wonderful Mr Freeze one-shot), Murphy and his collaborators, color artist Matt Hollingsworth and letterer AndWorld Design, have been creating a series that doesn’t look or read like anything else on the shelves. Some cynics may think that this is just another Batman book, and in many ways they’re right. Where it really counts though, they couldn’t be more wrong.
It’s astonishing to me how clearly and deeply Sean Gordon Murphy loves Batman. His version of the Dark Knight marries almost every iteration of the character, from his creation in 1939 right up to the modern aspect that comics fans know and love today. His Caped Crusader shares much with his Detective Comics #27 counterpart, yet he drives the 1989 movie Batmobile. Reading this title you can see how Murphy has taken elements from every one of his favorite Batman stories, poured them into a cooking pot, added several spices and flavorings all of his own and cooked up something deliciously reminiscent of everything that’s great about the character, plus something we’ve never seen before. 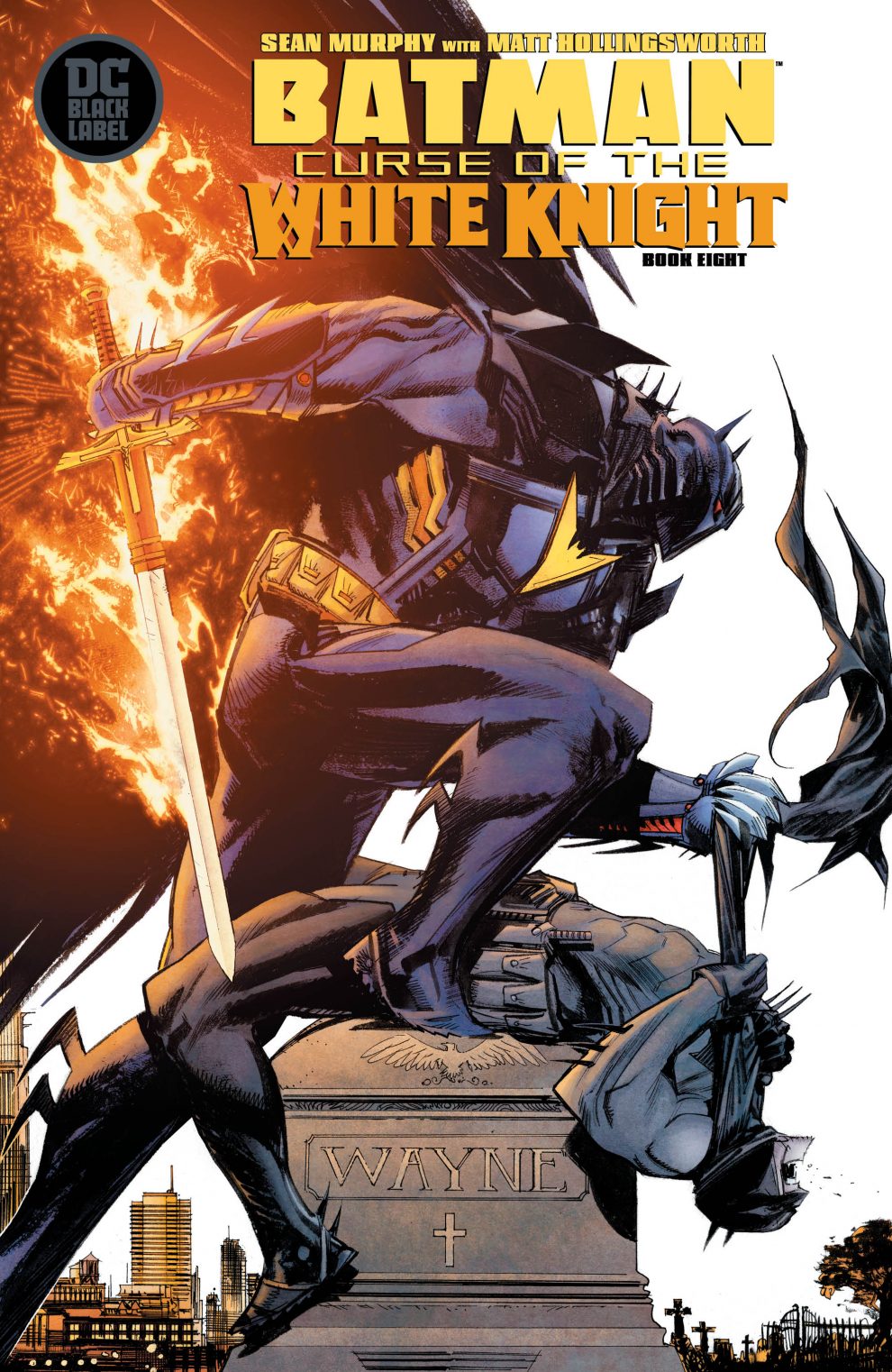 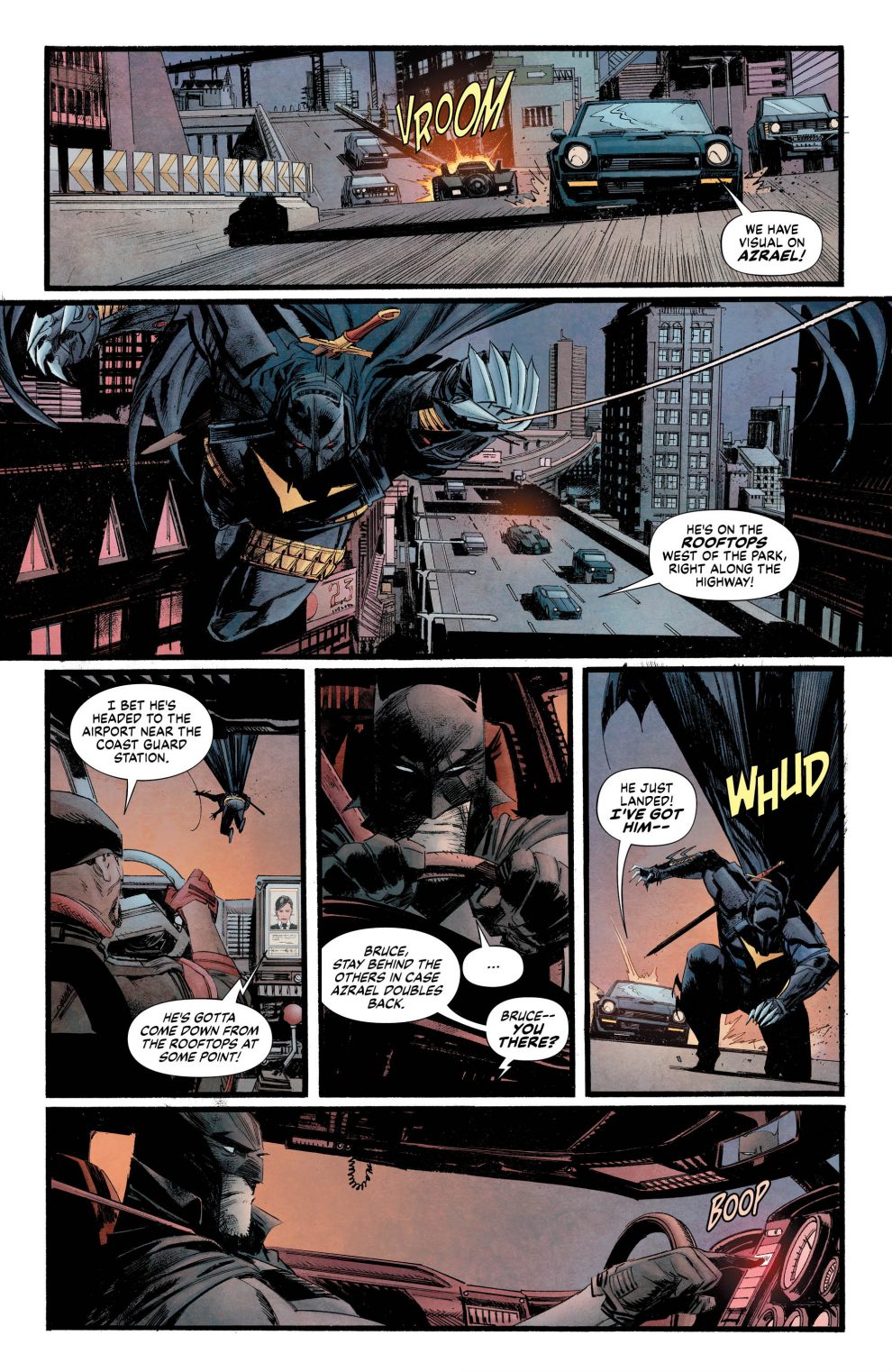 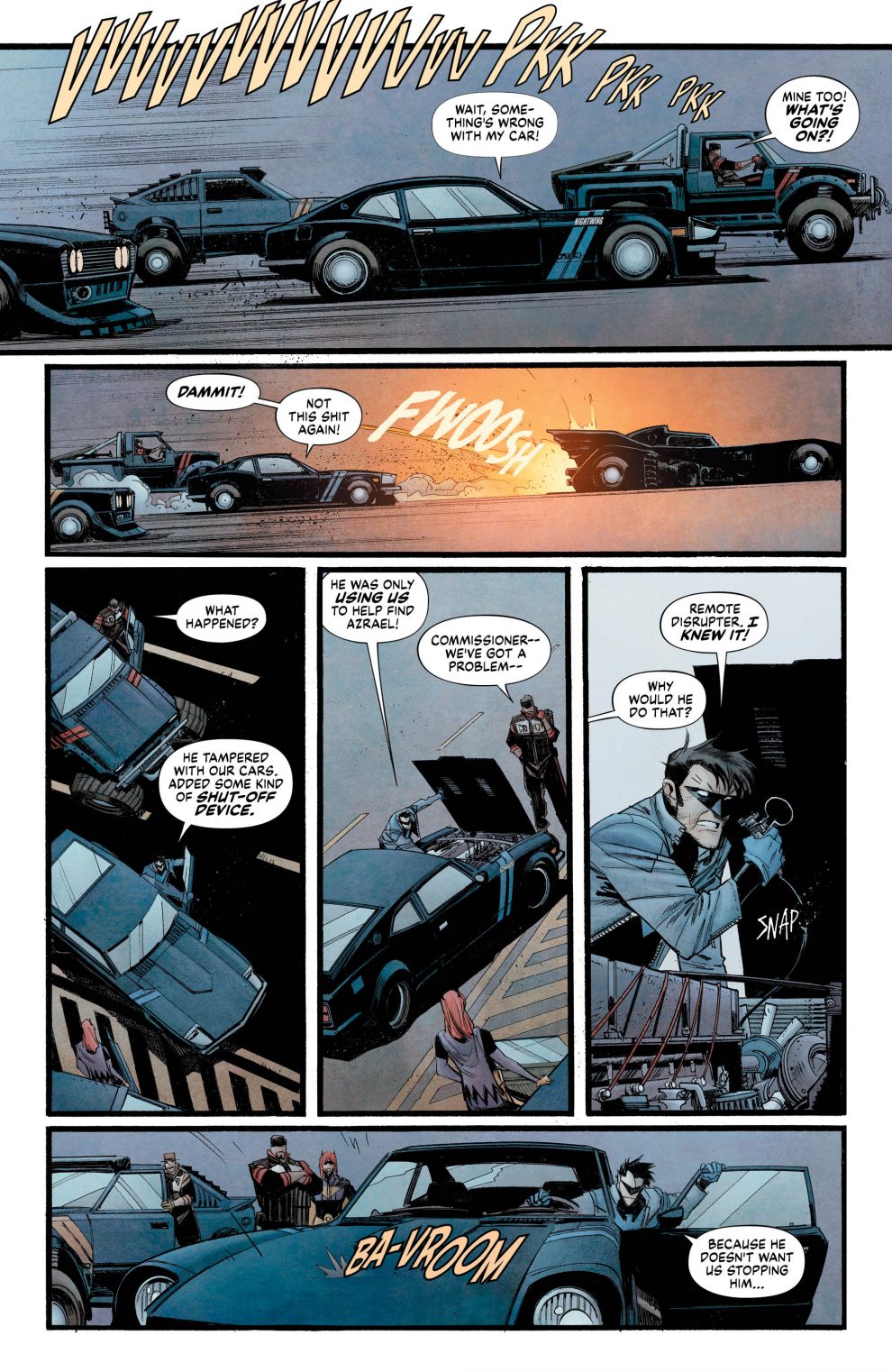 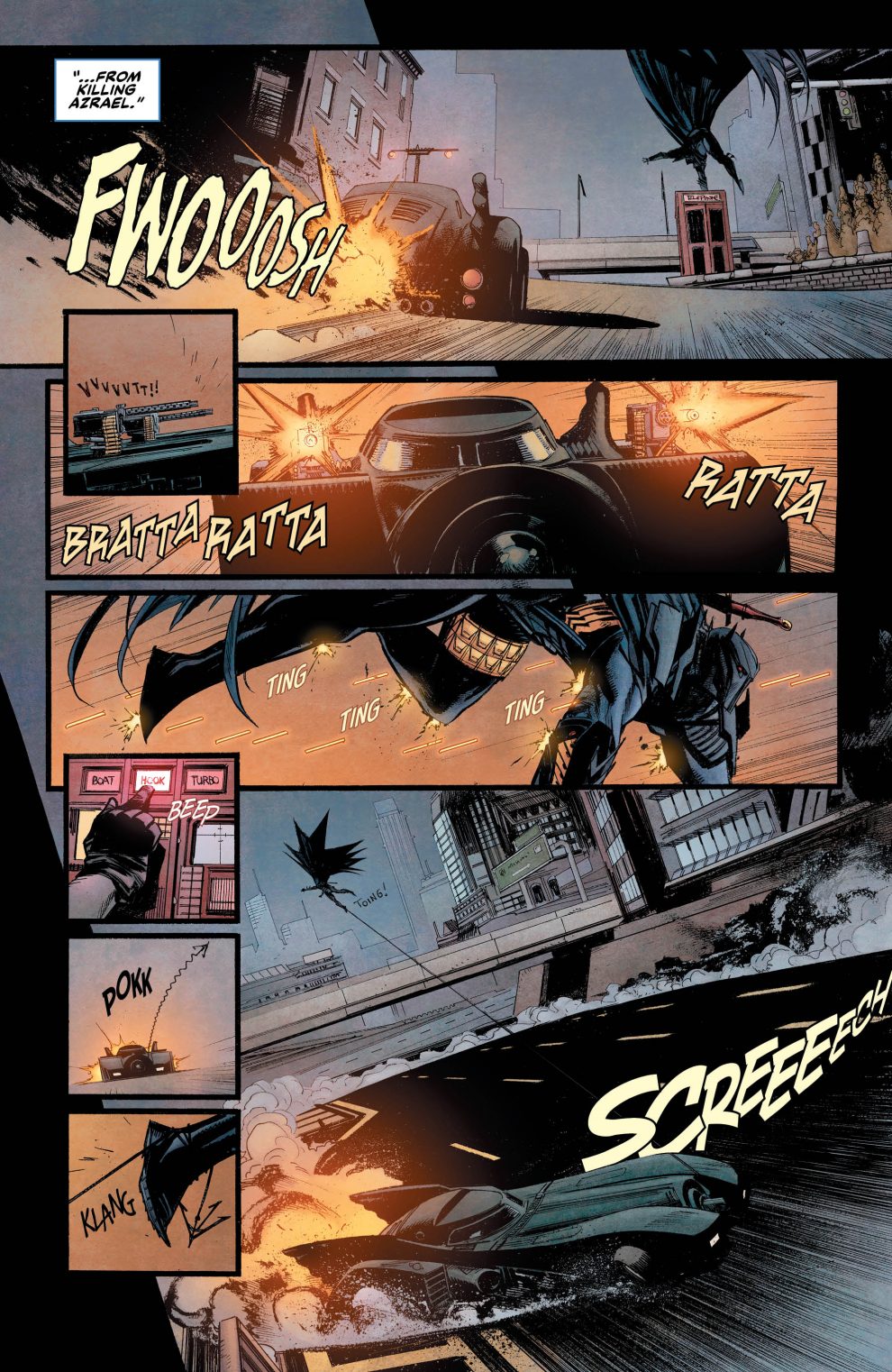 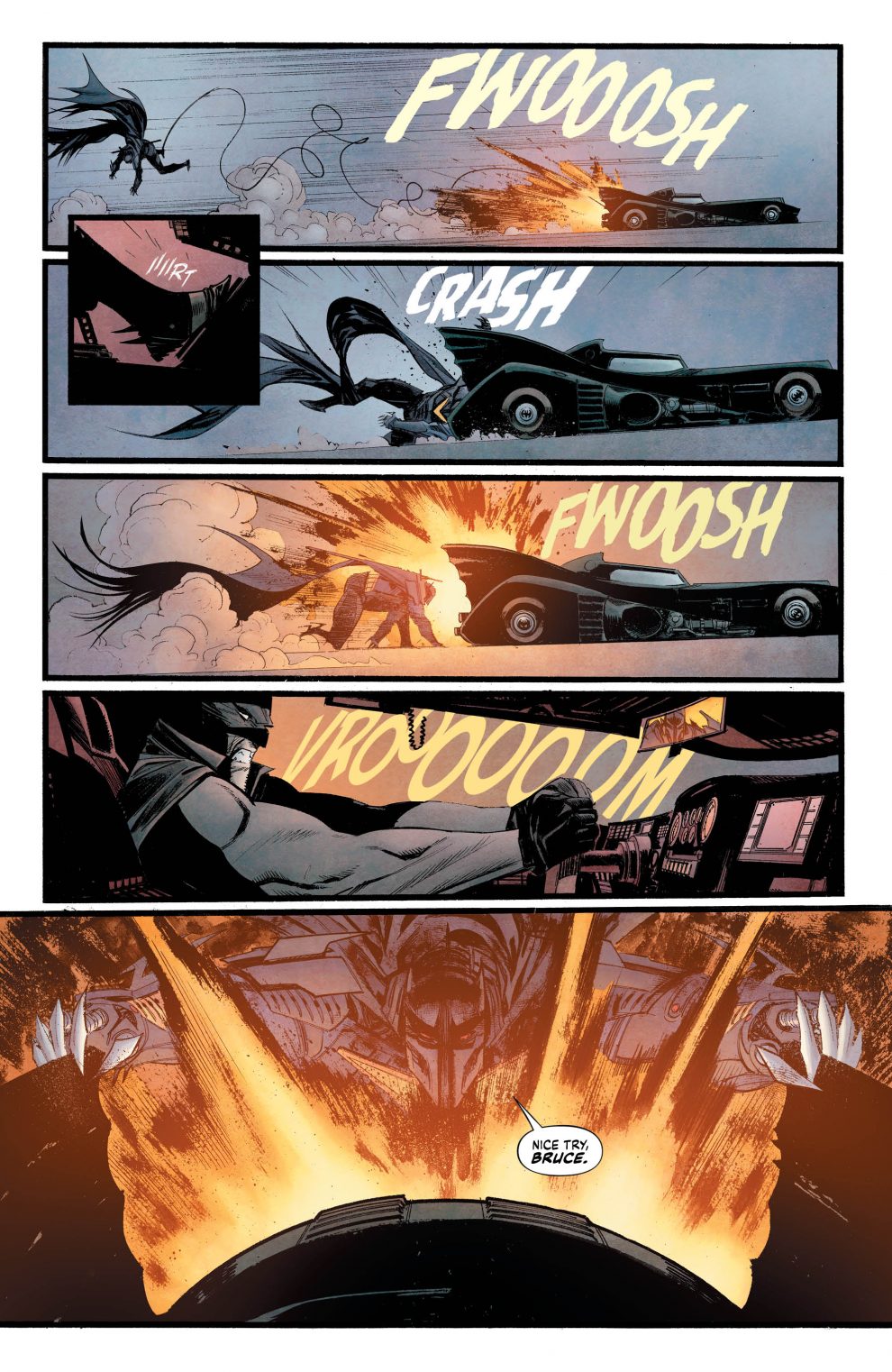 Sun of a Gun

Previews of this finale left me a little concerned, as I really don’t like seeing Batman brandishing firearms. I’ll admit it when I’m wrong, and in this instance I was unequivocally and gloriously so.
After the revelation that he’s not descended from the Waynes at all, but is actually part of the family that wiped them out led to Batman having an identity crisis of sorts. Discovering that Azrael actually is a Wayne, the death of Jim Gordon and having to reveal his secret identity to the world added to his pain. As this issue begins Batman sets out on a path where he’s actually out to kill Azrael, but – as I have come to expect from a writer as skilled as Sean Murphy – events take a turn, and we get to see the real true Batman in a way his mainstream, in-continuty appearances seldom rival.
The Black Label imprint, and this whole “Murphyverse”, gives these creators the chance to do things with these legendary characters that the constraints of canon and continuity don’t allow. Yet, for all the wild and wonderful creative twists and turns we’ve seen in the White Knight sagas, the Batman we get at the end is as classic a version as one could ever imagine, or hope for. 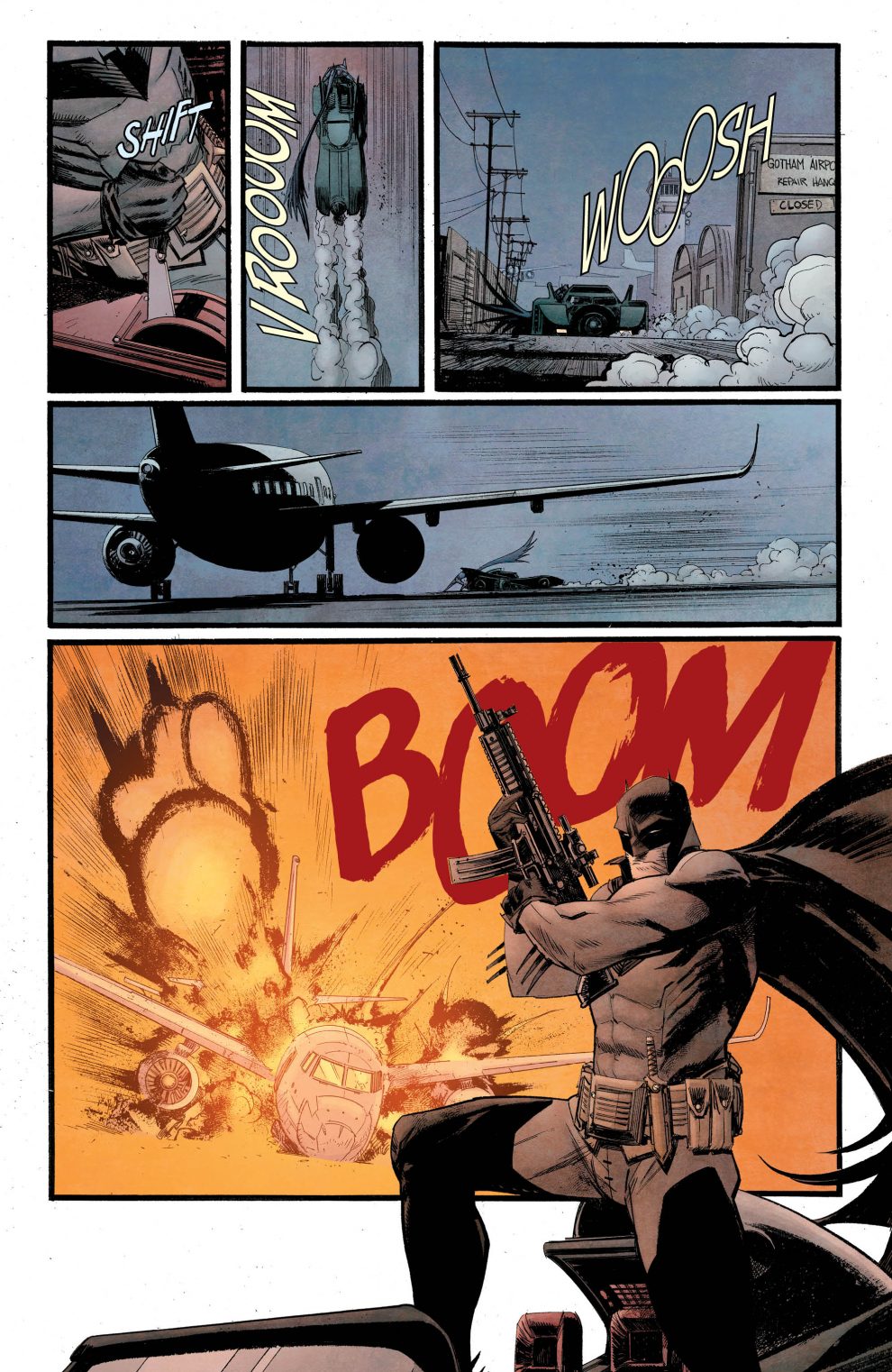 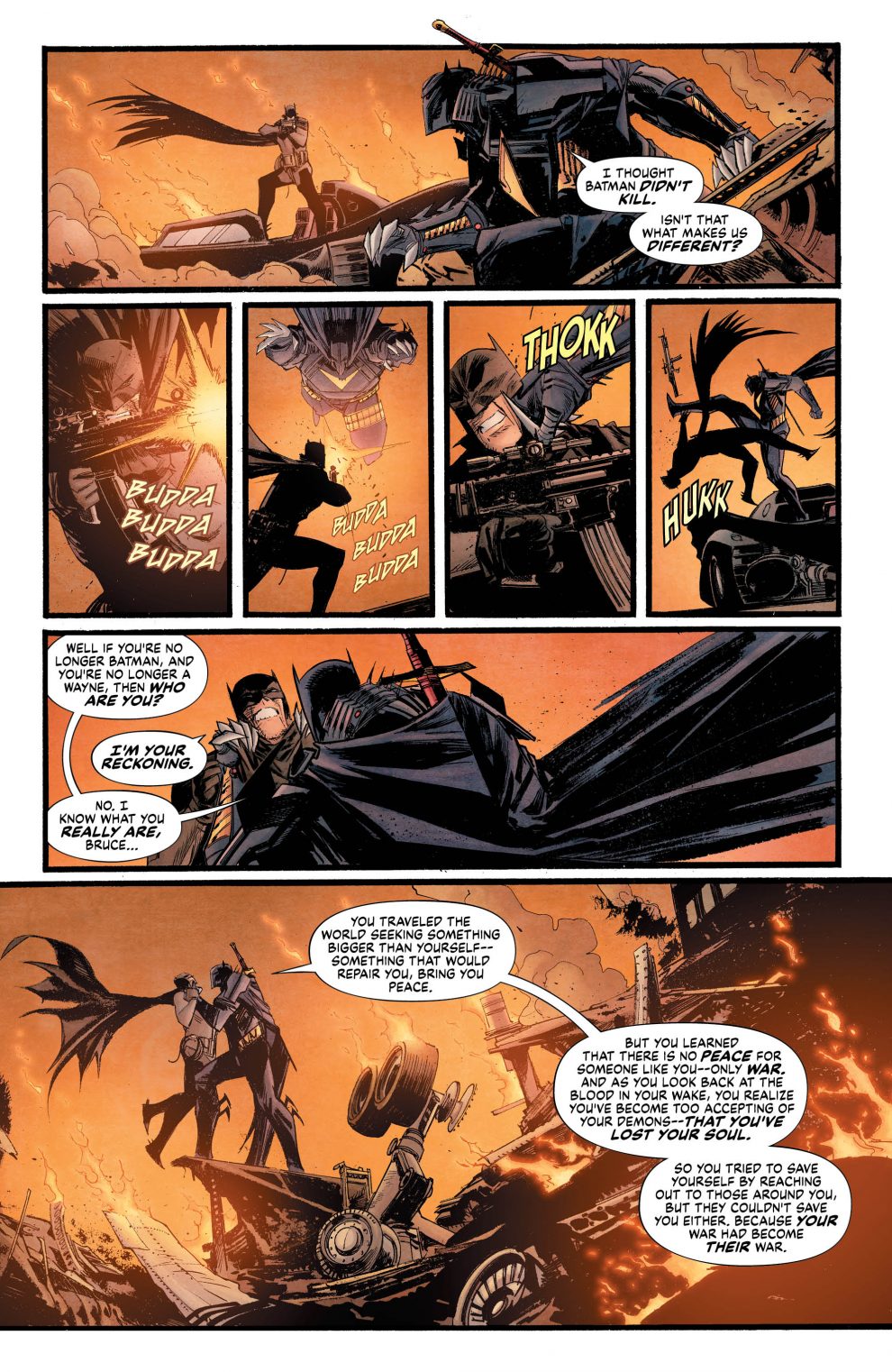 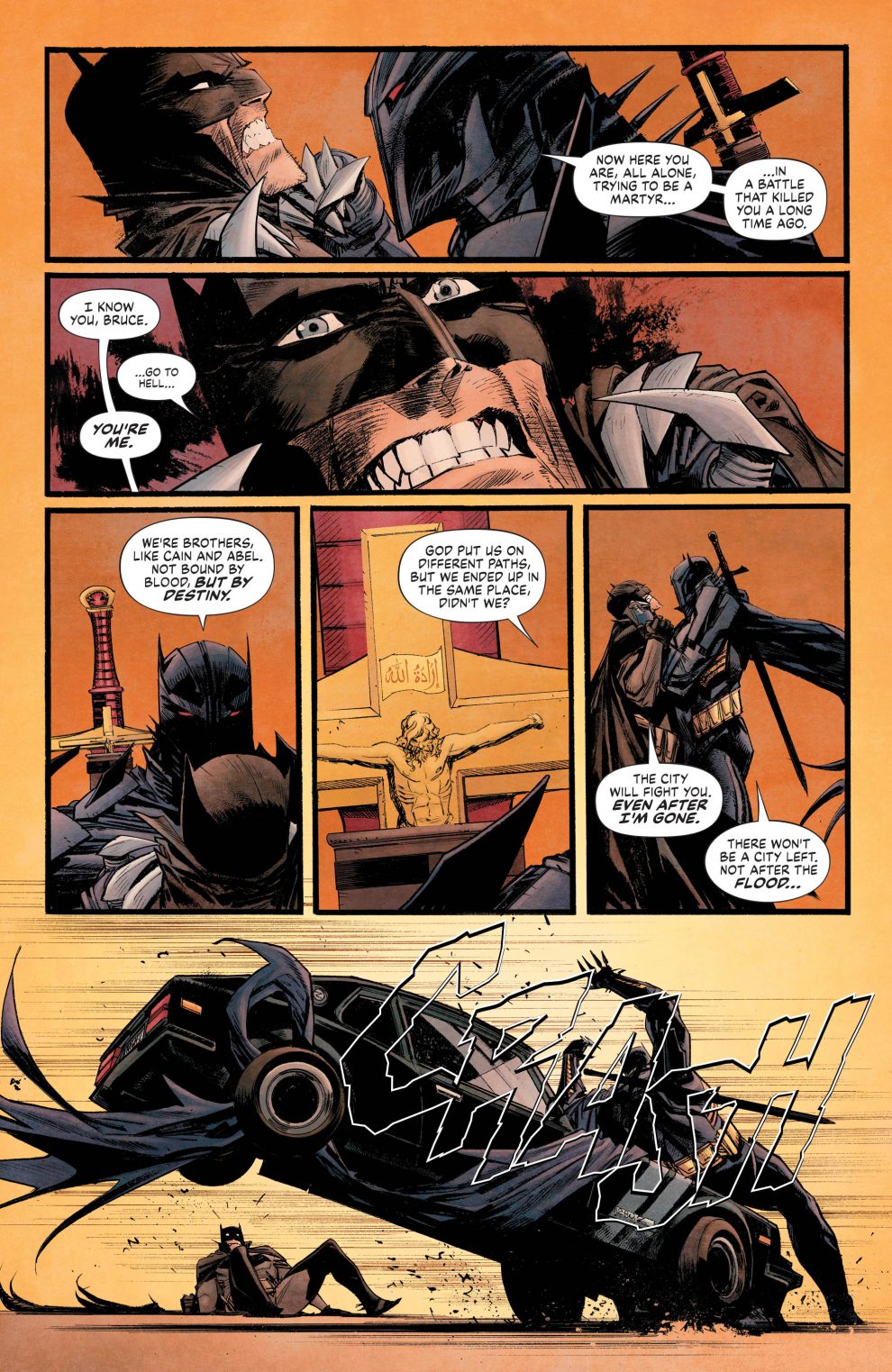 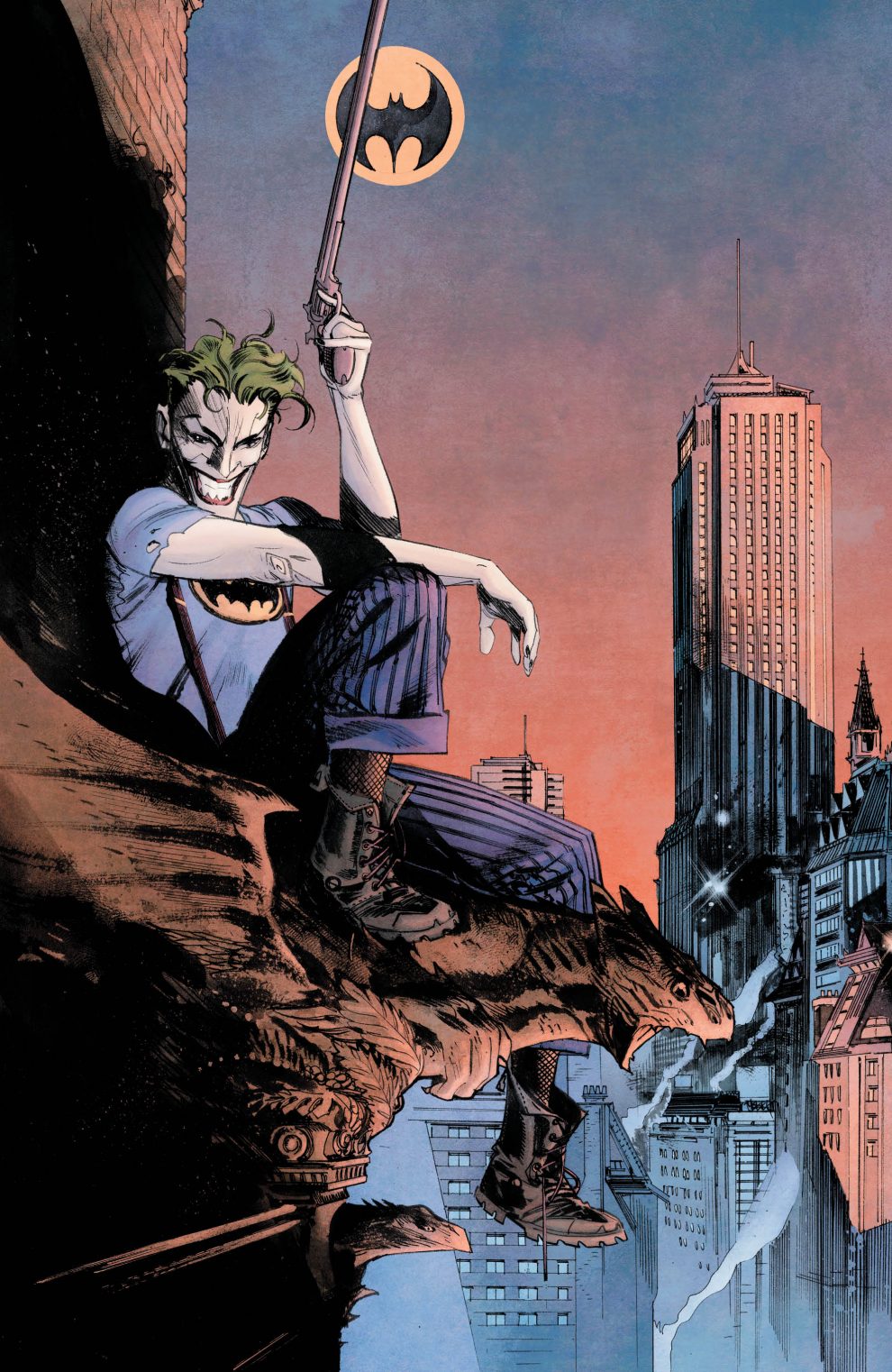 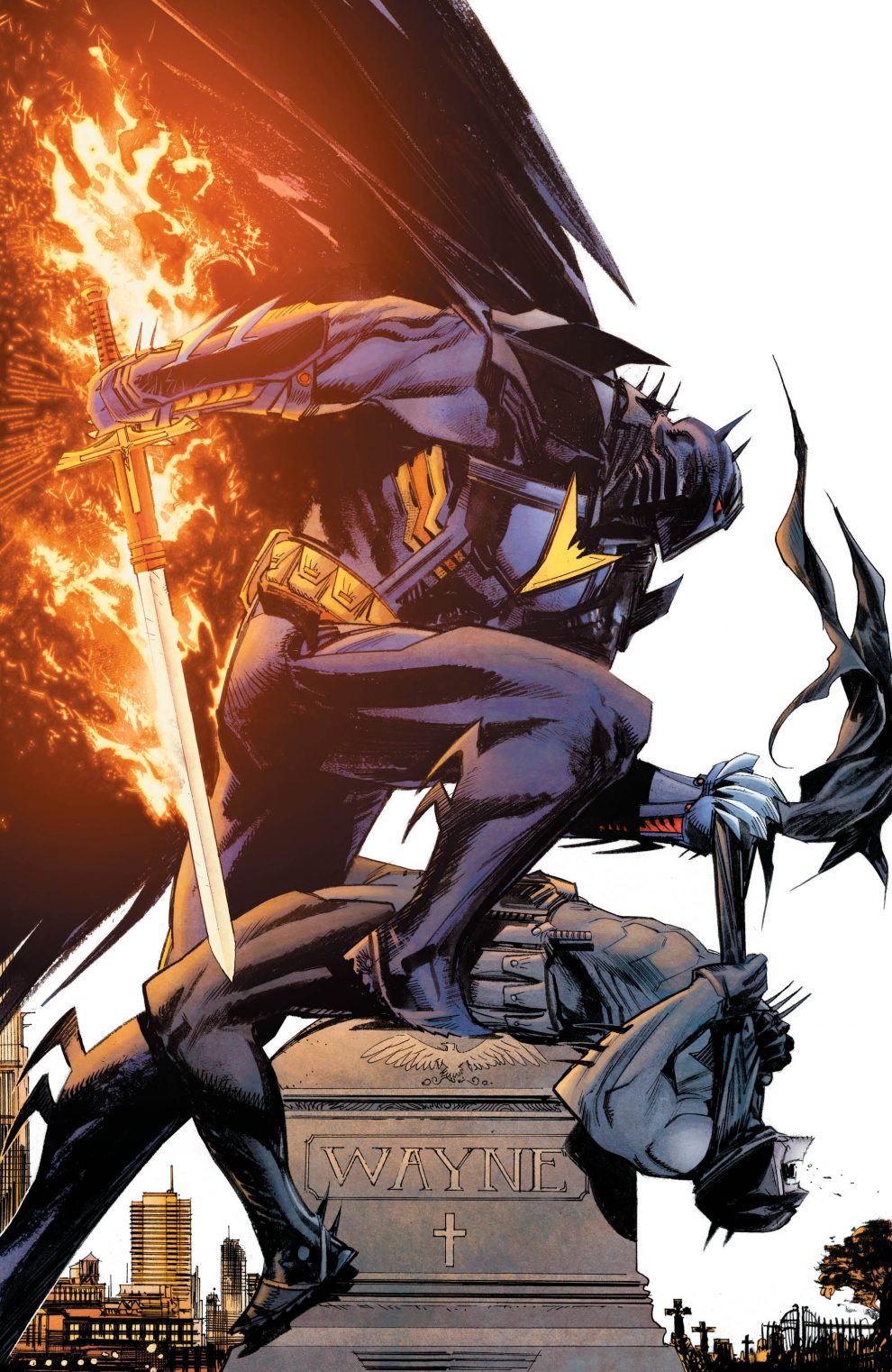 It’s not just the writing that’s innovative. Murphy’s line art and Hollingsworth’s magnificent colors raise the bar and break the mold. Much of Batman: Curse Of The White Knight #8 is set against a backdrop of a city in flames. Matt Hollingsworth has reserved a very set and limited color pallet for himself, yet he still manages to provide visuals that astound and lift the already exceptional line art to dizzying heights.
Tim Burton managed to create a Batmobile that turned into a rocket that could navigate narrow alleyways, and Christopher Nolan delivered a Bat-Tank that could give birth to a Bat-Cycle when catastrophically damaged. What Sean Murphy and Matt Hollingsworth manage to do with Batman’s legendary vehicle, which is based on Burton’s no less, knocked my socks off and made my toes curl.
I have to applaud AndWorld Design. Here is a letterer that has been given free reign to add character, flair, fire and brimstone to pages already steeped in originality. There are no blocky sound effects here… oh, no. We get transparent sounds, singeing flames and engines that roar in ways that remind readers of the Biffs, Bangs, and Ka-Pows of yesteryear, but created with the technology, crystal clarity and power of today. It’s amazing that even the lettering in this title, something that’s frequently overlooked and grossly underappreciated in comics, matches everything that the writing and art have accomplished: AndWorld have delivered a classic feel in a way that’s 100% 2020.
Bravo, gentlemen… bravo!

I was set and prepared to see Batman deliver a killing blow. I was ready for my hero to lose himself.
I’m not going to tell you if he does or not, but what I will say is that Sean Murphy, Matt Hollingsworth and AndWorld Design have managed to do with two mini-series and a special what many creators have barely managed over runs spanning years. They’ve given us a Batman who is everything he ever was, but in a brand new way.
His epic final battle with Azrael evokes everything from Zorro, to the legendary 70s duels between the Dark Knight and the Demon’s Head. We get a classic father/son conversation between Bruce and Dick, see a hero coming to terms with the fact that a name is sometimes just a name… and we even find love in the strangest of places.
Most of all, though, Batman: Curse Of The White Knight #8 provides an ending that’s satisfying, innovative and downright inspired. The best part is, it clearly shows us that in many ways the story’s only just begun.
Thanks for the final cameo, team!
Now… sign me up for White Knight III and an extended Murphyverse, please.